If you barely dip your toes in the NFT community, you will encounter Punks and Apes. You will see many influential people using them as their PFP (profile picture or picture for proof), and there’s a never-ending discussion about their floor price and utility. The Punks are 10,000 computer-generated pixel art pictures of… punks. They were created by larva labs in 2017 and given away for free to anyone who wanted to claim one. The lowest price to buy a punk right now is $122,808 (floor price) and the total lifetime sales of punks changing hands are nearly 2 billion dollars. Apes are BAYC (Bored Ape Yacht Club), another 10,000-piece NFT collection of computer-generated cartoon primates created in 2021 that initially sold for 0.08 ETH ($190 at the time) and are now worth $233,209. The Apes are famous for their utility which means owners get perks (coins, dogs, mutants, land), and they own the IP (Intellectual property) to their drawing. These extremely successful NFT projects have spawned thousands of copycats, and this is also where you will find most of the scams taking place. Projects where the founder disappears with all the money or just pump-and-dump behavior are rampant with 10k and PFP.

In January of this year, @fellowshiptrust announced they were bringing the world’s first-ever 10K+ photography NFT collection (Note: when this tweet first appeared, the link did not have the photographer’s name) to the blockchain.

The legacy of one of the 20th century’s most important photographers is coming to the blockchain.

On 10th Feb we are launching the world’s first ever 10K+ photography collection. The work will be free to mint!https://t.co/P4PoJReLXC

Given the action around Punks and Apes, this looked like an excellent idea for the photography community. Fellowship seemed to know this was an opportunity to make history, and project information was filled with hype: “The release of this project will mark a turning point in the history of photography.” In addition to the hyperbolic writing, there is a process for selling the NFTs to achieve maximum FOMO (Fear Of Missing Out), where VIPs were given the opportunity to pre-mint the NFT (this is called a whitelist) before the artist behind the project was even revealed. It’s common for 10k NFT projects to work with VIPs and create whitelists for early access because it all generates a feeling of exclusivity. When a project is popular and sells out, this guarantees an increase in price once it becomes available to the public, similar to what happens with IPOs on the stock market (oversubscribed). The people who got in early can flip the NFT for a profit.

If that weren’t enough, project creators taking a cue from Punks, build rarity into the NFTs and withhold revealing what you minted until a project has a chance to sell out. You have a one in ten thousand chance of getting something rare at the reveal, and that lottery-like feeling drives the floor price of collections. Photography archives have this already built-in because a small percentage of images are popular or appear in important collections or books.

So, once Fellowship assembled the whitelists and images were pre-minted (with a placeholder) it was revealed that the photographer was August Sander, and the public was allowed to mint any remaining images. The entire collection sold out in minutes. A big reason for the project’s popularity had to do with the price. It was offered for free “just gas”. This means you don’t pay a fee to mint, just the gas fee for the NFT to be written to the Ethereum blockchain (usually around $20).

As soon as I found out it was August Sander, I went to the project website and read up on the collection. August’s great-grandson Julian Sander had put the project together to create a permanent archive on the blockchain where I was told information about the images could be added by the community. I liked the idea of utility and owning a piece of the archive and the possibility that I could interact with other photography fans and even the estate because of my ownership. I also thought about winning a valuable August Sander NFT that I could flip for a premium.

Buying August Sander NFTs before the reveal reminds me of my baseball card collecting days of yore. Let’s hope I get a Mickey Mantle or two and not a Walt “No Neck” Williams. 😊 pic.twitter.com/BXxLvowi03

Then the reveal happened, and not only did I not get a famous image mine was this terrible scan: 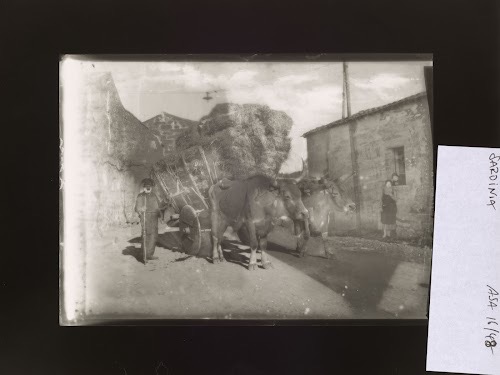 The secondary sales continued to climb and surpassed 400 ETH.

Congratulations to all the August Sander Collectors and @the_gee_pee for hiting the 400ETH mark.https://t.co/Tbt72ejCDJ pic.twitter.com/5z1JHmxEW1

Then in mid-march, the entire collection was taken down from Opensea.io At first, people thought it was a glitch of some type. Then on March 19, Julian Sander released a statement confirming what many were already discovering with simple google searches: “It was suspended because a third party, which claims to have certain rights in August Sanders’ photographs, submitted a complaint to OpenSea. I believe the complaint is not valid, and I am liaising with my legal advisors to get this resolved as soon as possible, and for the collection to be reinstated on the platform. This is my top priority right now.”

How is it possible nobody mentioned this? Many well-known people championed this NFT release, including Christie’s own Darius Himes, who was reportedly involved in bringing the project to @fellowshiptrust and interviewed Julian on his Instagram page (https://www.instagram.com/tv/CZ0UoULIqIj/). Still, nobody thought to bring up who owns the actual copyright to the estate?

And this is the nut of the problem with NFTs and this project in particular. Nobody seems to give a shit about copyright. When the project was removed from Opensea.io everyone involved simply said the project is still on the blockchain and is visible on marketplaces like rarible.com, where DMCA takedown notices have no effect. A central tenet behind NFTs is decentralization, so there’s nobody to complain to when your images are stolen. In one of the twitter spaces, I listened to Julian say that photographers have too much power and the DMCA is a problem. He went on to say that placing the collection on the blockchain was fair use arguing that owning a print gives you the right to sell it as an NFT (this changes the nature of NFTs from artist issued originals to eBay for anything in your possession). The members of Fellowship seem to agree with this sentiment as nobody is concerned that this is a legitimate copyright violation and they shouldn’t have put the project to live forever on the blockchain in the first place.

One other aspect of the project being glossed over is the claim that the NFTs were given away for free. Yes, you could mint one with no fee given to Julian or Fellowship, but when I asked Alejandro Cartagena, founding member of Fellowship Trust specifics of the project, I was told that they kept 4.5% of the 10,395 images. Also, 10% of the secondary sales (over $1,000,000) go to Julian (7.5%) and Fellowship (2.5%). In online conversations, I’ve listened to Julian talk about wanting to profit from the work and that the money will determine its value. Anyone saying the project was given away for free is being disingenuous. Not to mention that involvement in a historic project like this has enormous value beyond simply making money off it.

Finally, one aspect of NFTs that I absolutely loathe is the idea that as Alejandro put it to me, everything is “publicly accessible on the blockchain for anyone to read and verify.” When I asked him about randomization process or people minting then selling the NFT’s on the secondary market, I’m told it’s all visible online. The truth is that most people own multiple wallets where they move NFTs and ETH around so you can’t track them. Finding out who owns all the different wallets and following the path from one to another to the marketplace is quite tricky to verify. There are bots buying and selling, people selling to themselves, and money being traded behind the scenes, making it impossible to know what’s real. The transparency of NFTs is a joke.

I’m not sure why everyone involved in this project fumbled so hard. People associated with it refuse to admit they knew about SK Stiftung Kultur before the takedown notice was issued, and all seem perfectly complacent with the idea that the blockchain doesn’t care either. Overall, I’m just disappointed that my NFT purchase doesn’t give me access to the actual August Sander Estate, and instead I’m stuck with Julian, who, as the Great Grandson of the famous photographer, seems bitter about where the archive ended up.

Getting Us Closer To The Truth In Photography