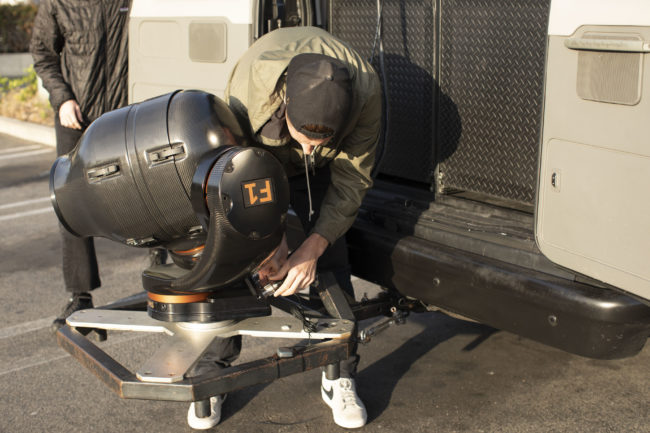 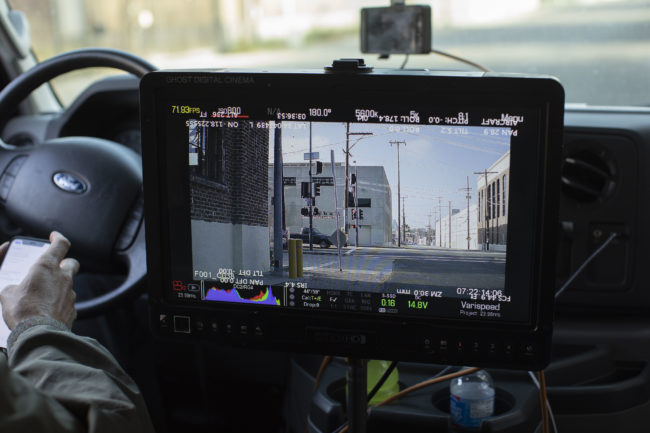 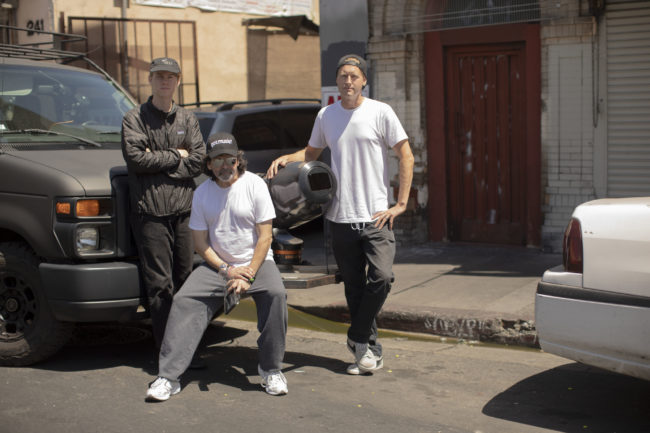 Heidi: How long did it take for you to find this subject, befriend him and get the story?
Scott: There were a couple of starts and stops on this one. I had initially approached a group of runners called The Skid Row Running Club. I described the kind of project I was looking to make and was invited to film. I went out and shot two or three times. I learned that there was a documentary team that was working on a feature length project that followed some of the runners who were training for a marathon. Since I was proposing something much shorter with a very different feel, it was deemed by the group not to be a conflict. The two filmmakers felt otherwise, and after receiving a hostile phone call I backed away.

What happened next?
With some help, I ended up finding another group with a very similar mission. It was a program called “Back On My Feet.” Mark (the subject of 6th and San Pedro) was a member of that group. I filmed with the whole group a couple of times, but once Mark split away, I decided to focus in on him. So I shot maybe six days worth of footage that I didn’t end up using.

So once you started over, how many days did you shoot?
Maybe six days of shooting spaced out over three trips to LA. I interviewed Mark on the tail end of one trip. I cut the audio together back in Portland. A job brought me back to LA and I managed to find an hour or two to shoot with Mark.Once I put those clips on a timeline with VO, and it that gave me the sense of how much more footage I might need. This meant getting back in the van one more time to drive down and finish it off.Meeting up with Mark wasn’t always easy, he had a lot going on in his life at this time, but we managed to get just enough footage for what I had in mind. What’s in the film is more or less every setup we shot, there’s not too much on the cutting room floor. I would say those six days are sort of equivalent to 2 with a crew.

How many people worked on the film?
Ghost Digital is a production company that a friend of mine runs. They have a van equipped with a stabilized head (Shotover F1.) It’s a 3 axis gimbal, inside a 3 axis gimbal. It’s amazing, you can drive down a pothole-filled road and footage is glass smooth, even with a 300mm lens. The telephoto tracking shots of Mark running were all captured with that setup. So on that day, I had a driver and an operator who controls the head remotely. He’s aiming it, zooming and focusing all at once, which is pretty crazy. I was seated behind the operator, with a monitor, and I had a walkie to communicate with Mark, but I think we ended up just yelling out the window for the most part. On the rest of the days it was me and a friend who I’d roped into helping me.  I needed someone to help make sure the gear didn’t walk away, and for a few shots I was being pulled in a wagon. On those days I had nothing more than some still lenses, a camera and a tripod and a slider.

That’s it?
To the extent that it was produced, I was the producer, also the director, the director of photography, the sound recordist, the editor, the mixer and I did the color grade and the titles. My very talented friend Arjan Miranda composed an original score. Anyone who finishes a personal project will tell you how grateful they are for every name in the credits.

Did you collaborate with a writer or you wrote this?
There was no writer on this project, the voiceover is edited down from
an hour-long interview I did with Mark. I worked with a fellow photographer/director Andrew Norton on a few projects a couple of years back, Andrew has a background in radio production, and watching him conduct interviews taught me a lot about the process: What kinds of questions set up answers that you can use, how to listen for tenses and context, how to interview for the edit in the same way that a good DP or director is shooting for the edit. On the post side I learned how to shape an interview into a story arc, and how finesse the details. Adding or subtracting pauses, leaving in some of the quirks that we all have when we speak, but loosing anything extraneous. That said, Mark was very engaging and very emotive in how he told his story. We did the interview in my garage under a little tent made of moving blankets and C-stands. When we finished we were both a little misty.

Why black and white?
I suppose metaphorically it’s a story of darkness and light, it just seemed to fit. That’s the joy of a personal project; you don’t have to make the case for anything. You have an instinct, and that’s enough.

Why did you feel it was important to tell this story?
Obviously homelessness is a huge issue in this country, but I didn’t set out with any particular agenda. I was really just following my nose. The idea of a homeless running club was unexpected, that got me started. When I met Mark I was interested in hearing what the path was that lead him to where he was at. When I learned about his academic pursuits and career ambitions that added another layer too. I think there’s merit in challenging people’s expectations.

The Art of the Personal Project: Zach Anderson