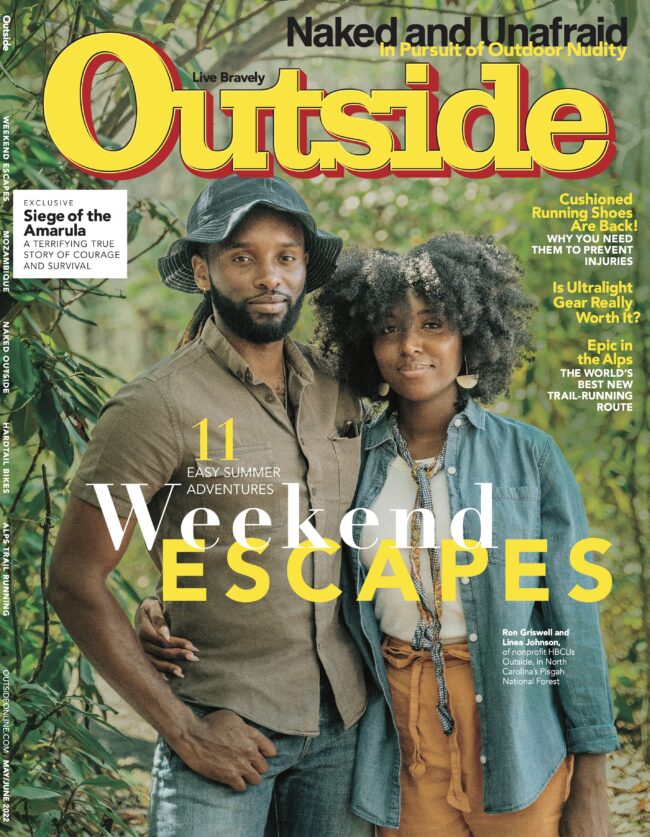 Heidi: How did this cover idea come about?
Kyra: When we got the list of places for our travel section I was excited to see North Carolina on the list. I had worked with Clif last summer on a project based in NC, and had really wanted to find another to work with him on. The entire cover idea mostly came from working with Clif and getting to priorize a part of the country we dont often cover. We end up doing a lot of shoots in CA because the weather is so consistent, but I really like when we are able to highlight other parts of the country that have fantastic adventure opportunities!

Was this cover image a first for Outside magazine?
Clif had sent us a list of local models that he had worked with before, and we instantly gravitated towards Ron Griswell’s amazing energy and smile! We thought it would be great to have two people on the cover and when Ron suggested his wife Linea we thought it would be so much more natural to have them pose together instead of putting Ron with another model. It was Outside’s first cover with a Black couple, and I’m really happy that we were able to have Ron and Linea because their relationship is truly something for all of us to aspire to. They have such an intuitive relationship and such strong love for each other which really comes across in Clif’s images. Since the three of them are friends in real life, we ended up with such authentic and fun images.

Outside Magazine, in my opinion, has not always been the most inclusive space, and I wish a cover like this one had been a first a long time ago. We’ve made good strides in the past few years, and I am working towards making covers (and interior content) like this one a constant. Everyone should feel represented, because everyone should be able to feel safe and comfortable in the outdoors. I hope that by having more covers like this one, we can help chip away at the idea that BIPOC people aren’t active in the outdoors. They are, they just haven’t been represented in the outdoor media and I want to help change that mentality as much as I can.

What type of direction did you give Clif?
Clif is a dream to work with because there isnt too much direction needed! I tend to hire photographers who have a strong voice already present in their images, but it’s also great to be able to collaborate! I had a few ideas coming in, which Clif and I discussed before set up, and then he would just roll with it. Over direction can sometimes stop a spontaneous and perfect moment and I never want to get in the way of that! It’s a balance, but working with someone like Clif helps because the energy he is bringing to the images is always undeniable!
What agency did you use to cast the models and what were you looking for? We were pretty grassroots for this one! Clif sent us a list of models he has worked with since we wanted the images to feel natural. We dont usually work with agencies mostly because we want the models we work with to be people who love being outside and feel comfortable with outdoor activities. It’s nice to work with models who havent done a lot of traditional modeling as well, sometimes with agency models they know their angles so well the images lose a bit of unplanned magic.

When you are hiring BIPOC photographers, what are your resources?
I use the Diversify Photo database pretty often, as well as the databases for Indigenous Photo and Women Photograph. Ive also fully embraced that being a photo editor is a lot of detective work, so I’m constantly trying to see who other magazines/newspapers are working with, and finding new people on instagram. (Is this what you mean or do you mean resources in another way?)

The first photo I saw of Clif’s was of a model boarding down a dune at Great Sand Dunes, and it just made me smile, the whole image had so much fun energy. I had just started at Outside, and was trying to build up a roster of photographers that I thought fit the brand well and that I wanted to work with eventually. It took me a while to get on my feet at Outside, especially since a lot of stories had already been assigned when I started, but Clif has been a photographer I had wanted to work with from the beginning!