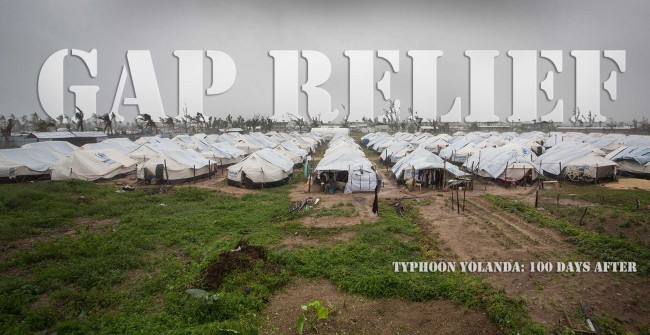 East Samar, Philippines – Nov. 8, 2013 – Typhoon Yolanda (Haiyan) hits land in the central islands of the Philippines with wind gusts over 300 km/hr – 6,340 people died in the largest typhoon in recorded history. 100 days later, relief efforts were only just beginning to make an impact. 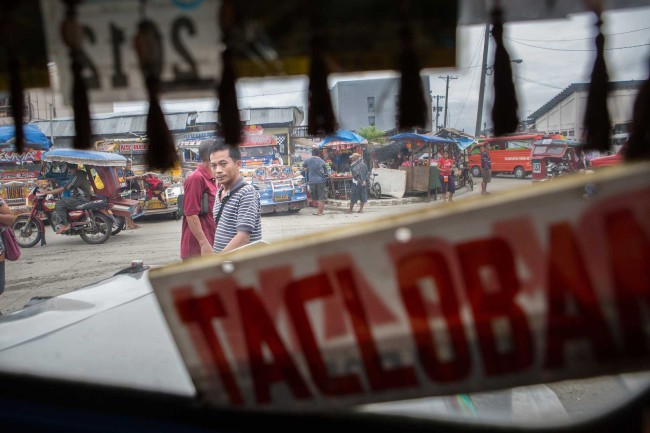 Tacloban, Philippines – A man looks in through the window of a jeepney (local taxi van) that is bound for Guiuan where typhoon relief is still much needed. 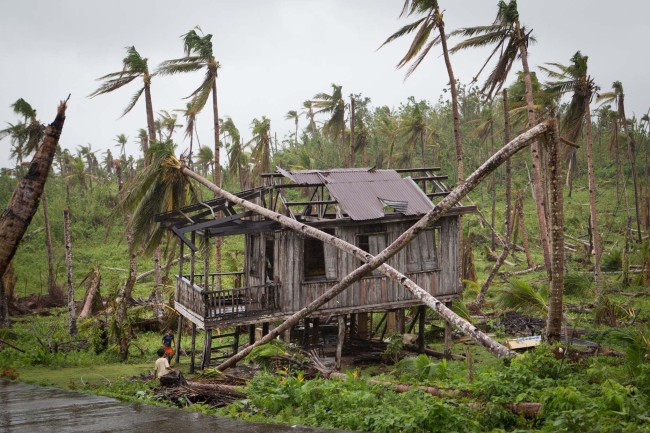 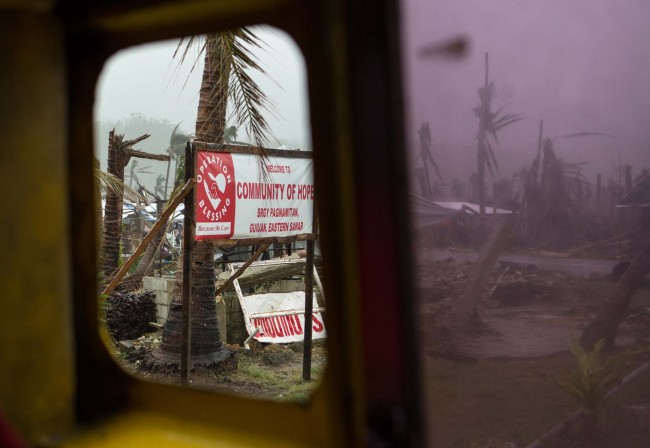 Operation Blessing International is the humanitarian relief wing of the Christian Broadcasting Network (CBN/the 700 Club). One of the largest charities in America, Operation Blessing provides strategic relief in 23 countries around the world on a daily basis. 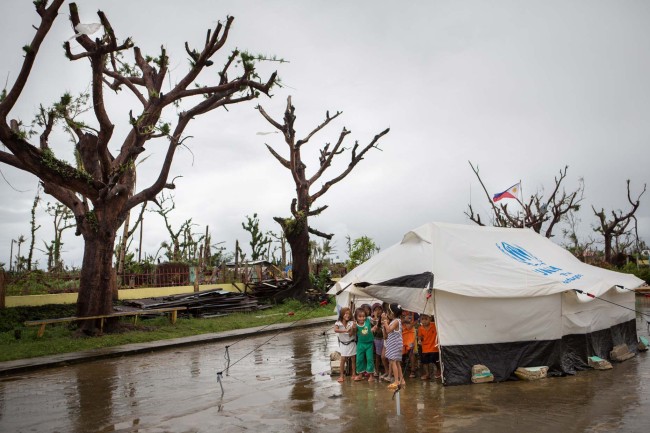 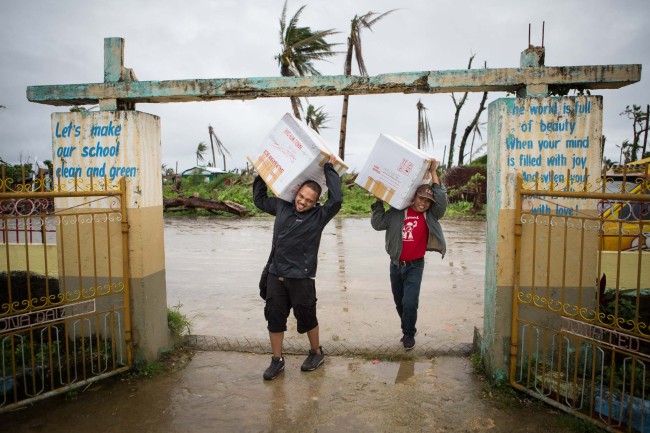 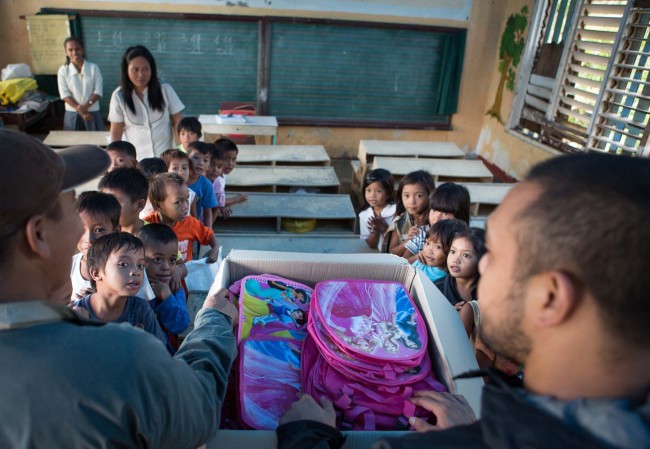 Children receive much needed educational supplies from Doc Tiger and Astherio Blando (Operation Blessing) as part of efforts to reestablish classes in the devastated area. 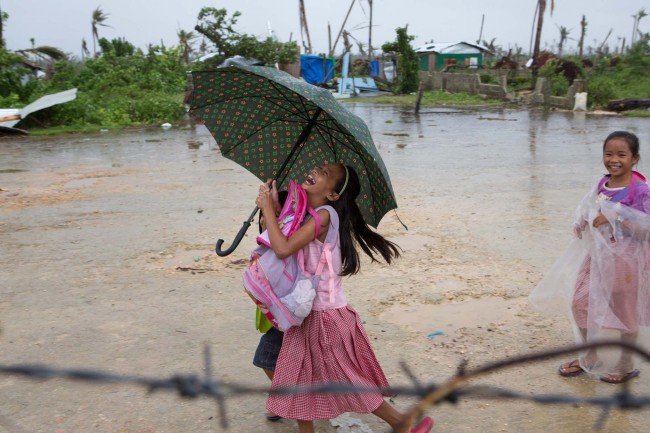 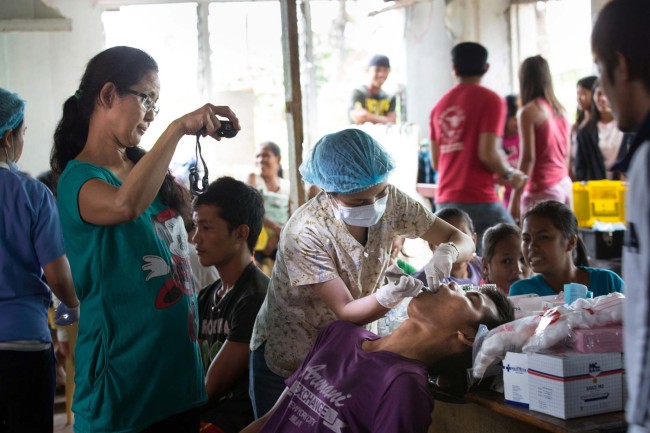 Guiuan, E. Samar, Philippines – Working with a team of volunteer dentists, Dr. Kelly Yangco and others perform 75 extractions in a single shift at a makeshift clinic in Barangay Barbo. 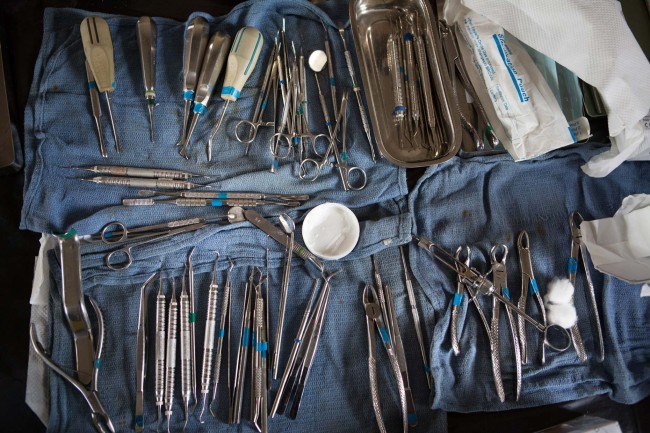 Dental instruments, cleaned with water and water, lie ready for the next wave of children visiting the makeshift clinic during a medical relief operation near Guiuan, East Samar, Philippines. 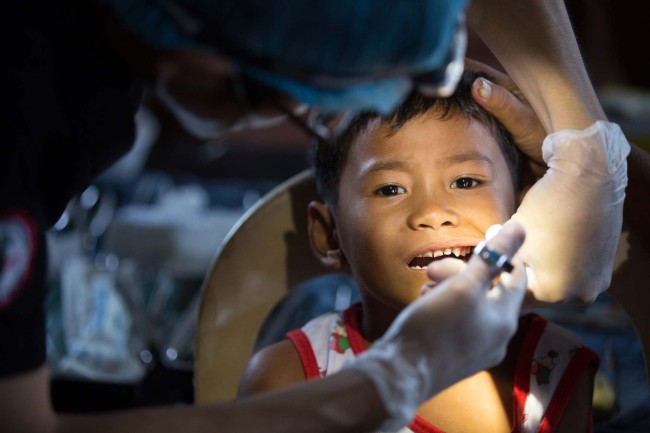 Guiuan, E. Samar, Philippines – Working with a team of volunteer dentists, Dr. Atom Kobayashi helps to perform 75 extractions in a single shift at a makeshift clinic in Barangay Barbo. 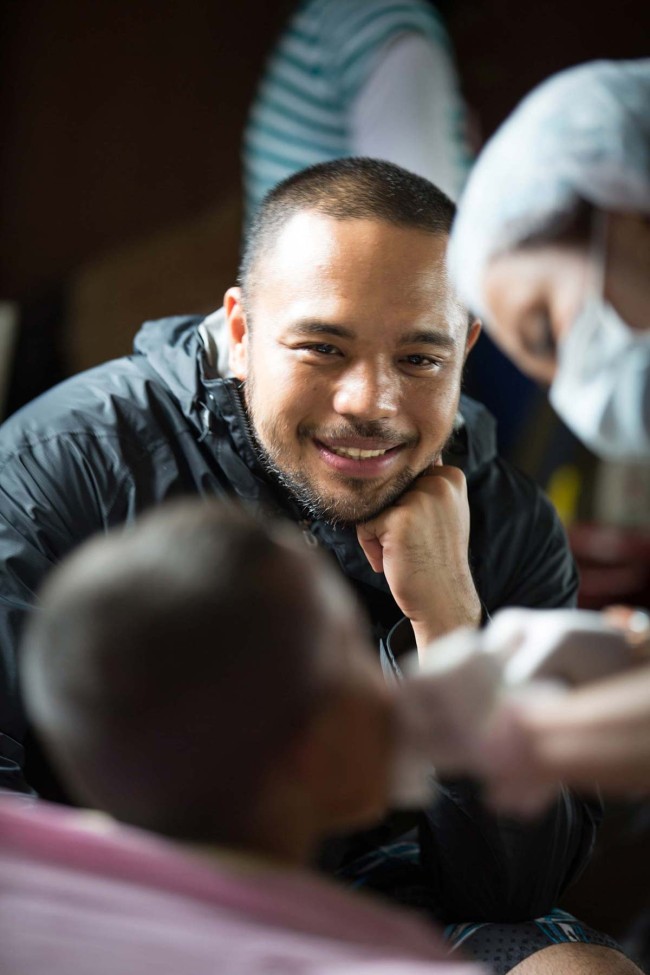 How long have you been shooting?
I was shooting for fun back in the 70’s when it was a fad to frame an Instamatic diagonally. That migrated to 35mm and 6×7 for a time, but dad said I’d starve as a poet so I went into forest engineering. By 1999, I could see what industrial forestry was doing to watersheds and decided I’d rather starve. I’ve been shooting full time ever since.

Are you self-taught or photography school taught?
I’m mostly self-taught through books, manuals, mentorships, workshops and a steady diet of trial and error. But I admire those who have taken time away from shooting to learn how to do it well.

With this particular project, what was your inspiration to shoot it?
Typhoon Yolanda (Haiyan) smashed into the central islands of the Philippines on November 8, 2013 and the news was really hitting home for us. My father-in-law (Tatay) has relatives in Palo, just outside of Tacloban near Cebu, and he wanted to get help-money in. He specifically intended it to go to a nephew Ryan, who was missing; so we made some calls and volunteered to help out where we could.

My wife, who has worked as a nurse, flew with me to Bohol where relief efforts were still underway for victims of a 7.2 earthquake that had hit the area 3-weeks earlier. While there, we got wind of a medical mission flying into Tacloban, a town that Typhoon Yolanda had all-but-flattened; so, we set out to find my wife’s cousin by chasing a separate story with the working title, “Saving Ryan Privately”, a story that has yet to be told properly.

How many years have you been shooting this project before you decided to present it?
We’ve always had a big heart for S.E. Asia and have been doing photo-walkabouts to the Philippines for over 10 years. In 2013, when Typhoon Yolanda struck, organizers of our “Kids at Risk” project* (see footnote) wanted to contribute to an Emergency Disaster Relief Fund for Yolanda survivors. That fit nicely with other interests we had on the ground and it offered a chance to show donors and participants what those funds looked like in action.

How long do you spend on a personal project before deciding if it is working?
Hmm… tough question. For me, a humanitarian story ‘works’ when it motivates others to get tangibly involved in the story – and that certainly happened with the Yolanda Gap Relief story. But I admit, without the metrics of opt-ins and dollars earned, boxes delivered and bellies filled, it’s pretty tough to quantify the success of most personal projects.

Since shooting for your portfolio is different from personal work, how do you feel when the work is different?
My personal work is very different than the commercial portfolio work, and that can be frustrating – like that Ian Hunter album “You’re Never Alone with a Schizophrenic”. But the bottom line is that most creative challenges get me stoked – whether it’s a humanitarian cause or selling a bar of soap – because in the end, it’s the commercial work that frees me up to tackle personal projects.

If so, has the work ever gone viral and possibly with great press?
The humanitarian work hasn’t gone viral, but I’m more interested in qualified engagement than the number of views there.

On lighter stuff, I’ve seen some interesting metrics. There was a DIY blog post called “How to fix a stuck filter” with a hammer and hacksaw that F-Stoppers and PetaPixel picked up on. And there was a gear-related video for Lowepro called Watertight that hit 50,000 views, but both were a long way from viral.

Have you printed your personal projects for your marketing to reach potential clients?
Yes. Last year I collaborated with consultants Pedro & Jackie to print a tri-fold photo essay called Ukraine: Postcards from the Motherland. It was passed around at PDN PhotoPlus Expo last year and received some great feedback but no concrete work. That was probably the wrong venue for something as documentary/editorial as that. I’ve still got a few hundred kicking around if you want one.

Artist Statement: Creative talent is the most valuable currency an artist possesses. How better to spend it than on projects that bless others and hopefully feed the greater good of us all.

*Footnote: In 2010, my wife launched a small fundraising program called “Kids at Risk” in Salmon Arm, BC to educate her friends about the pressing needs of Filipino street kids and get solid help over to trustworthy feeding and educational programs in the Philippines. More on that, here: World of Good [length 4:45]

Commercial lifestyle and portrait photographer, Craig Pulsifer thrives on that line between personal and product assignment work. He draws inspiration from Gully Jimson, Bruno Gerussi, Larry Towell, and some of today’s top news shooters who work to master the craft of fine-art storytelling.