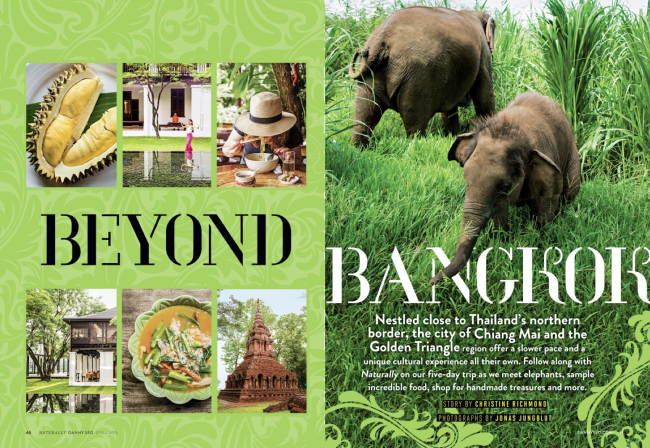 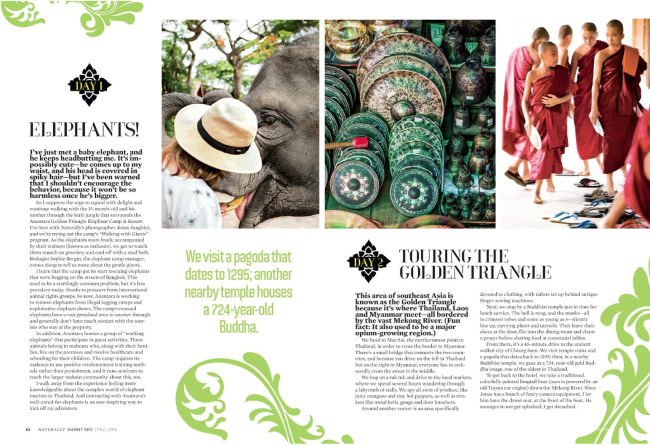 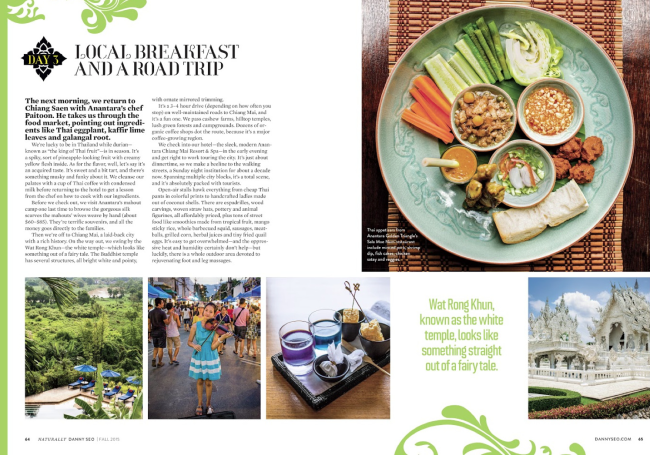 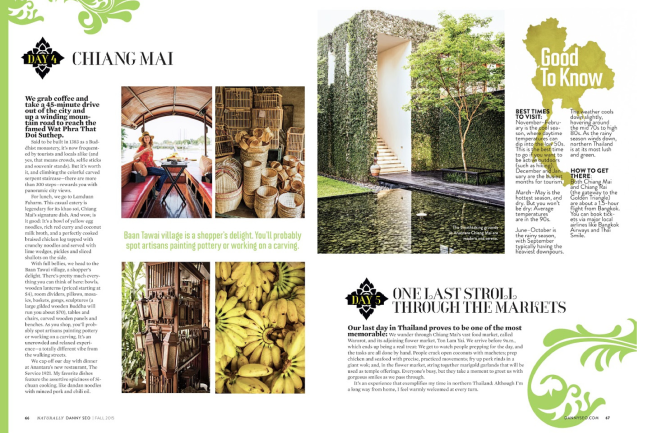 Travel assignments are the most coveted, how did this project come about?
The writer on this story, Christine Richmond, also was in Ireland with me for a story last year. It was with the same magazine and we worked together well so I think we were a perfect team to go over there without an editor and do our thing.

Did you have a relationship with the magazine?
Yes, I have been working with Naturally Danny Seo for about a year thanks to another great photographer, Shelly Strazis who recommended me. My first job with the magazine was the travel story in Ireland mentioned above. Besides having bad oysters and the resulting food poisoning on our most important shoot day it went great and I have been busy with the magazine since.

How long were you there?
We spent five days in the area and traveled between Chiang Rai and Chiang Mai for one day by car. I then flew to Bangkok and spent another night. Initially this was going to be a two-day story but given that it took me a good two days just to get there we extended to make it worthwhile.

Did  you have a specific shot list from the magazine?
We had a loose list. There were certain elements which they wanted to see but we really had a bit of freedom to explore, while sticking to a pretty solid itinerary, and build our own story based on what we encountered. That was really nice. The fact that it was just the two of us made that somewhat straight forward as well. There was no exact image request on that list, all images in the story are experience images.

What was the biggest obstacle for this project?
The distance to the location from my house if you can call that an obstacle. Really, the fact that I had to travel for pretty much 2 days straight to get there was, probably the only thing one could consider an obstacle. Or maybe having to shoot while sitting on an elephant, I could see that being an obstacle for someone! I think if you want to find an obstacle you always can. Weather, getting head butted by a 400 lb baby elephant, language barrier, this list can go on for a while. Part of doing a travel assignment is to get past obstacles and render them into experiences.

How many vaccines did you have to get?
Well, I needed some updating anyways but I did get some specific to the region. I think I walked out with four different vaccines and a few hundred dollars less in my pocket. The place where I got them was pretty pushy on malarone tablets for malaria but I decided against those for fear of nightmares and when we got to Thailand people were surprised on the suggestion of taking it.

How do you go about tackling travel shoots, do you have a process?
It depends on the assignment. For the Thailand piece the writer and I were pitching other stories to piggy-back onto the trip quite frantically. We figured we should make the most of it being all the way over there already. Nobody was interested and in hindsight we were relieved since we were pretty spent after those five days. I also did a little bit of research on the area to make sure I wouldn’t miss something while already there. But this trip was very well-organized and we had guides almost all the time so we could just do our thing without having to worry about logistics. There actually was almost no time to explore beyond the itinerary, so we just focused on that.

In my experience assigned travel jobs are usually organized and have an itinerary so doing a bunch of extra research can be a waste of time since you never get to whatever you find and it might end up distracting you from focusing on what you have in front of you. It really depends on the client and specific assignment.

One thing to be careful with is to over-research and then getting stuck on an itinerary created on a screen versus a real life experience. When I travel for shooting stock or on jobs with loose schedules I like to have a few pointers and then explore from there.

Project based travel shoots require a whole lot of prep. Having two young kids and being on the road as much as I am has not really allowed for extended project based travel in the recent years but I do have ideas that I’d like to realize in the future. My recent Europe trip was sort of project trip since I planned it as a “shootation”, shoot a bunch of stock while being on vacation. I quickly realized that being on the road with two kids under the age of 6 by yourself killed a lot of the activities that were only loosely planned.

How was Santa Barbara been as a home base?
I love Santa Barbara as a base. Almost all my work is out-of-town so I get quite a bit of international exposure. I had this conversation with a client recently. We were sitting having coffee in Vancouver during a shoot and he mentioned that I was so cut off from the world in Santa Barbara. I replied that it forces me to travel and I actually get exposed to different cultures and locations more than if I lived in a large market and wouldn’t have to leave.

It’s not easy growing your career living in Santa Barbara, people think you are a local photographer (or who knows maybe they don’t?) but I do ok, I travel, and I live in a place I truly enjoy. And when I need my fix of urban, modern, culture or whatever I get antsy about I make sure to get it on an upcoming trip. 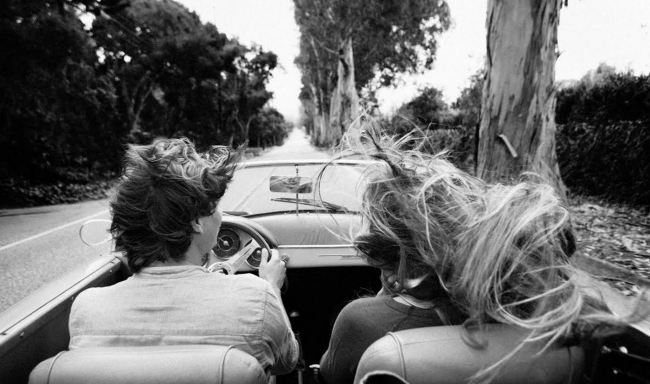 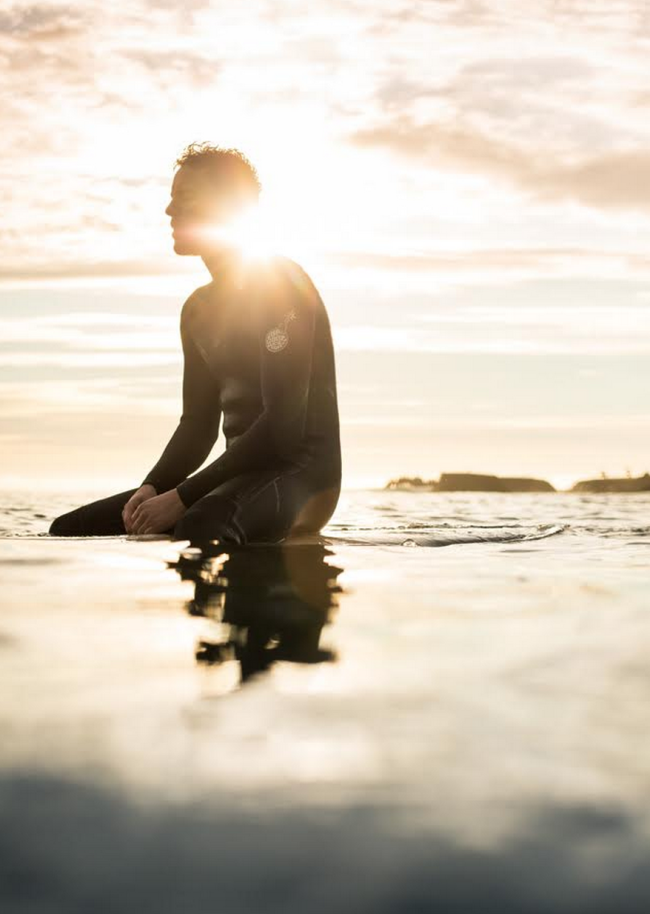 What made you choose Brooks for schooling?
My whole pre-Californian life was heavily influenced by California. Skateboarding, Mountain Biking, surfing, the weather, the Beat Generation writers, the lifestyle. This may be a little off topic but Mr. Hasselhoff (yes yes, I am German) did an incredible job selling this place (Baywatch! I hope the California tourism board knows how much he helped) Ha! More than wanting to go to Brooks I wanted to be in California! And Brooks accepted me so I packed a bag and went. They came highly acclaimed and I had been photographing for a good 5 years at this point (I was 20) and knew that this was what I wanted to do with my life. It was a perfect fit.

Looking back, what type of advice would you give students? Or what did you wish your younger self knew back then?
Network hard with your fellow students, a lot of them will end up working in places that will be of interest to you down the road. It’s also nice to have a solid set of friends that you can check in with if you run into something you don’t quite have an answer to. Also: Don’t drive yourself crazy about grades. My whole academic career was driven by me passing classes while really focusing on the stuff that I wanted to focus on.  I actually think that assisting (apprenticeship/real world experience) is probably more valuable than having a college degree in this career. It’s important to be honest with yourself! Understand that this career requires experience, skill and dedication. Embrace the failures and don’t be afraid to make more. Understand the economics behind this profession and check in with yourself every so often. Are you having fun? It is a choice to be a photographer, might as well make it exactly what you want, otherwise I don’t see the point.

How has your love for travel and sport folded into your work and resulted in assignment work?
Being able to do certain things physically is a skill set that sets you apart. The same goes for being ok with long days of travel and all the other fun things that can happen to you while on the road. I think all my clients appreciate that I am very tolerant to challenging travel and that I can shoot underwater, while riding a skateboard or on the side of a cliff. I also really enjoy shooting “real” stuff. It’s great to be on a produced and organized set and being able to apply your knowledge of lighting and all that stuff but getting a portrait of someone right after he got pulled in the boat because a shark started circling him during an endurance swim is just so visceral, you communicate with people through your images, it’s engaging. 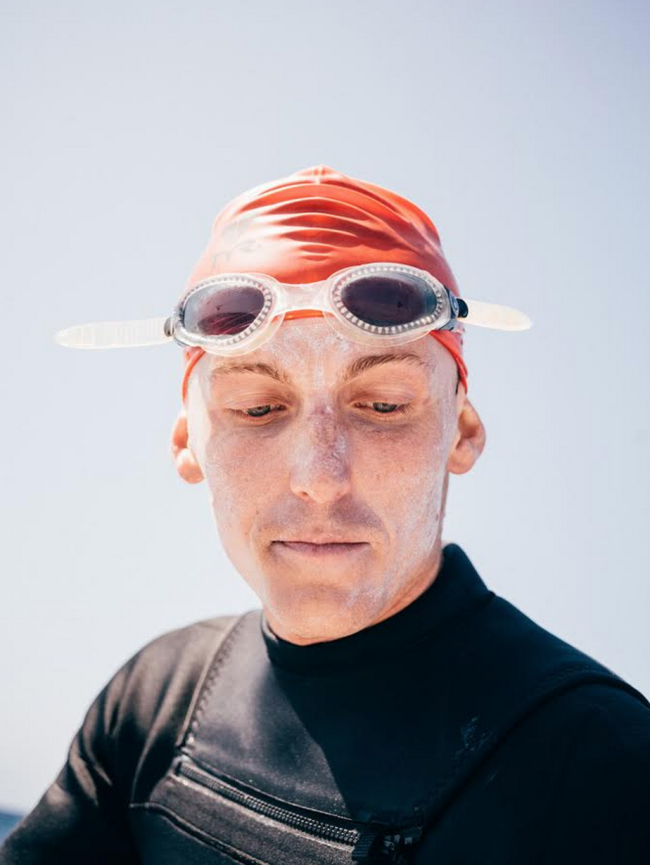 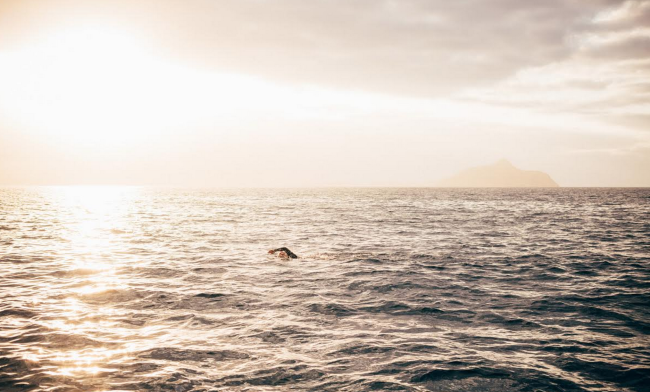 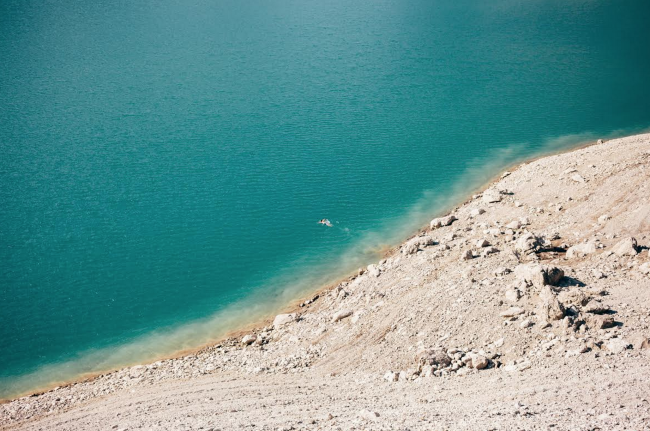 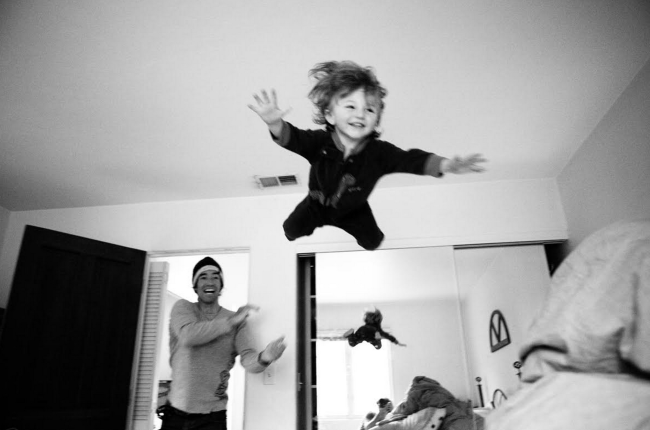 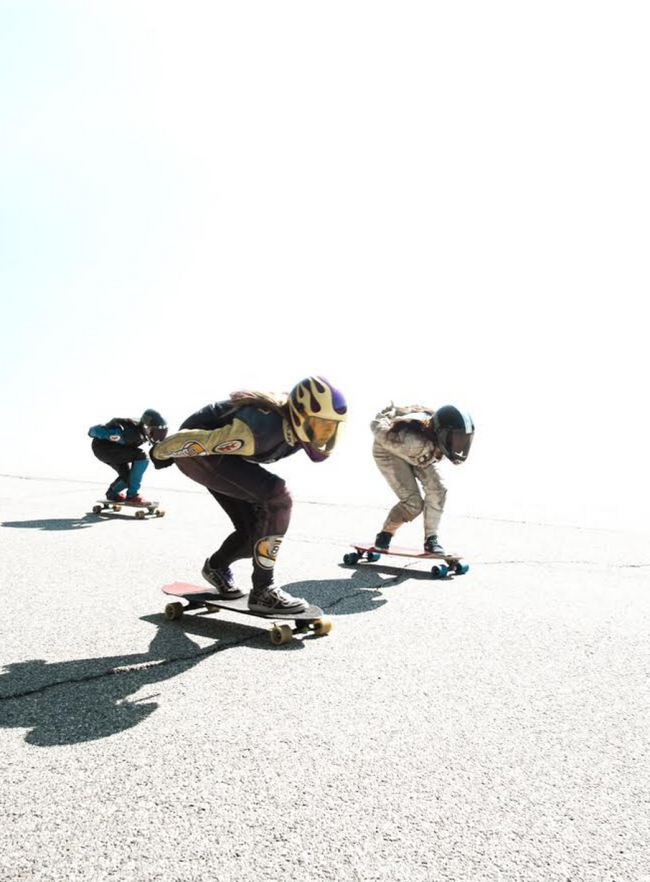 Travel experiences enrich you culturally and being active allows you to apply that experience and get angles and/or locations that would otherwise be inaccessible to you. You won’t get hired to shoot from an inflatable dingy on open ocean all day if you only shoot in a studio and I enjoy doing stuff like that from time to time. I don’t want to spend all my time inside. It also makes for great dinner conversation when you tell people who you have been slapped in the face by a dolphin (and have video to prove it), survived an 8.8 earthquake on the 19th floor of a hotel or race street luge. I think it just creates a brand and we all know that’s a good thing.