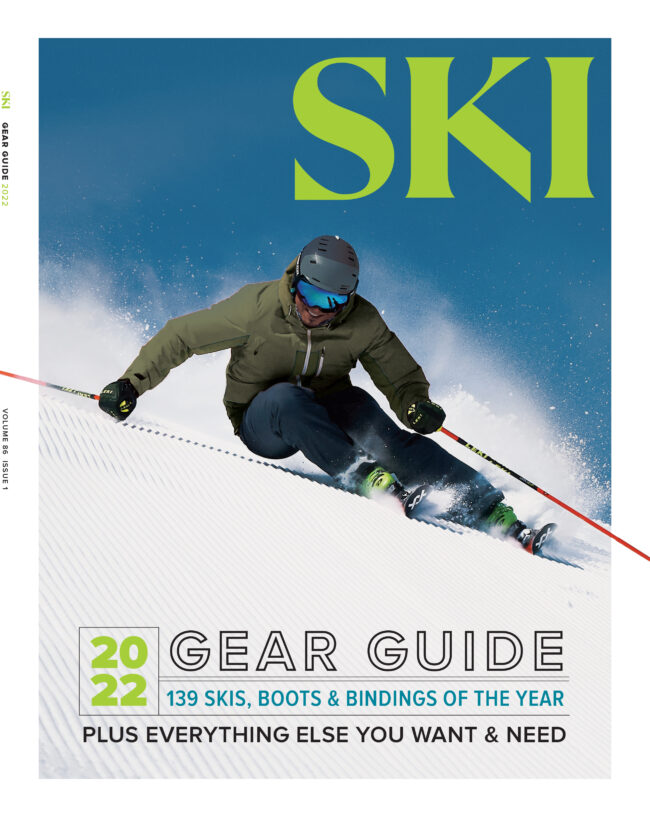 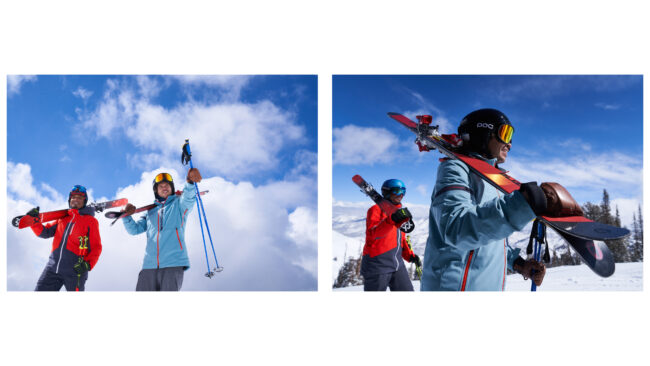 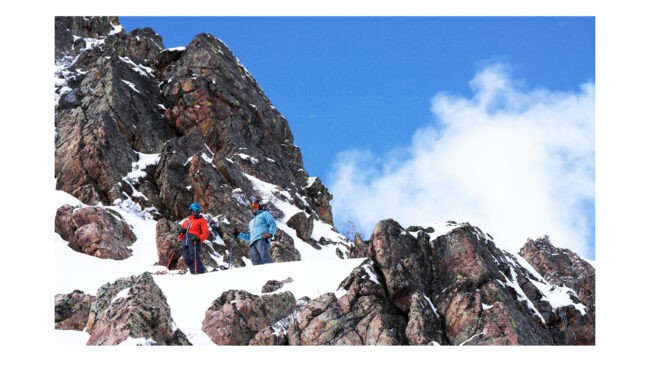 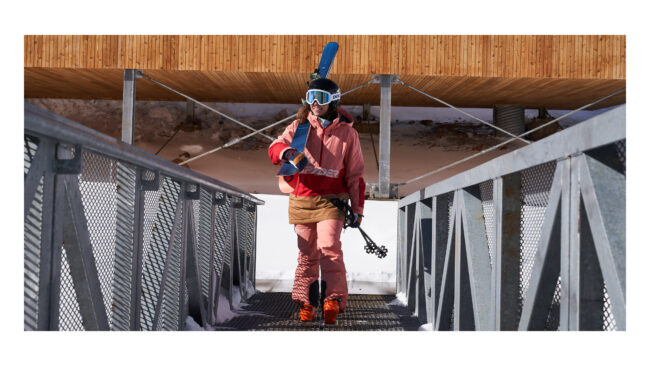 Heidi: SKI Magazine was framed around an invitation to a party, how did you update this and help make this, in the words of the Sierra Shafer, Editor-in-Chief make this “a fresh invitation?”
Stan: They wanted it fun and authentic but not too staged.  We kept it real. We explored the backcountry, went searching for powder, carved groomers, laughed on chairlifts and Lauren asked me a million questions on the snowcat ride. I leaned into their personalities and tried to extract what a real ski vacation with a group of friends might look like. This group of friends just happened to be Black. SKI just rebranded and wants to maintain an ethos of appealing to the hardcore skier, provide quantifiable product information as well as opening it’s lens to a broader audience with a dash of healthy respect for mother nature. I think we achieved all those things.

I know this cover is honoring representation in front and behind the camera, what else can you elaborate on for you personally about this experience?
It is about teaching the importance of Black Media. Too often diverse talent is in front of the lens but when the final piece is aired it’s been edited and chopped to fit the narrative of  whoever paid production costs.  On one hand, naive actors, models and athletes may not know any better but on the other hand there are some that get paid to read lines in front of a camera and the motivation is not always altruistic. Unfortunately sometimes for brands it’s more about looking like they are doing the right thing rather than actually doing the right thing.  We need to be controlling our own narrative if we want the real message to get out. I look at what high profile Black actors, musicians and athletes are doing by creating their own production companies, structuring their own deals with licensing and percentages and retaining their masters.  I took the knowledge I have and put it into

I had a zoom meeting with the SKI staff awhile ago and we were talking about diversity and how people view it as this super serious goal and it becomes this pebble in your shoe if you are resistant to it. I think if we shifted the attitudes and talked about DEI as a block party or a potluck you would go and earnestly invite ALL  your neighbors and ask them to bring something –  you’re not quite sure what you will get but it is the curiosity in setting the stage and the dinner table. You might be hesitant to try a new dish but it could turn out that you love it plus there’s something about bringing a dish of your own that you love and sharing it with others. I really need to thank Sierra, Keri, Elyse and Andrea for inviting me to the potluck at Micah’s prodding. They put money, time and effort into this when they didn’t really know me. Sometimes great things come from a leap of faith.

This magazine has been publishing for 85 years, how did this unique idea come about?
It was mainly initiated by Micah Abrams, he was the publisher Snowboarder, Powder, Surfer, Bike Men’s Journal and had overseen my guest editor on “The Black Issue” of  Snowboarder Magazine.  When ASN folded he went to Outside and started tackling diversity head on pretty quickly. He appreciated the creativity and experience I brought to that issue as well as my understanding of winter sports culture and Black culture. So he called me and asked if I could help him steer SKI authentically in DEI and give insight to Black people in the outdoors for Outside Business Journal.

You’ve been shooting for 25+ years, what made this project and cover with Errol Kerr special for you.
Honestly I’d done this 20 years earlier with Snowboarder so I kind of knew what to expect.  It’s less about what it does for SKI and more about empowering the athletes involved and letting them tell their stories in their own way.  Having Lauren, Justin and David Samuels there as well made them feel seen. They weren’t props in an advertisement, these were real people who have had pivotal experiences in the outdoor industry. Some deeply personal and they’ve really had no one that looks like them to talk through and share.  Those experiences can make you feel very alone. But having a group of people is a support system to learn and grow. Within that experience,  joy comes as a second nature and each of those athletes will be a catalyst to spread that joy to the culture. That’s the part that brands miss in their quest for ROI because joy is an intangible metric but it brings us all to the hill and together. It’s also about advertising to a younger generation. Really kids have to see it to be it and I’m glad I am manifesting change with my camera.

What was the direction from the magazine or Outside as a brand?
They wanted it fun and authentic but not too staged.  We kept it real. We explored the backcountry, went searching for powder, carved groomers, laughed on chairlifts and Lauren asked me a million questions on the snowcat ride. I leaned into their personalities and tried to extract what a real ski vacation with a group of friends might look like. This group of friends just happened to be Black.  SKI just rebranded and wants to maintain an ethos of appealing to the hardcore skier, provide quantifiable product information as well as opening it’s lens to a broader audience with a dash of healthy respect for mother nature. I think we achieved all those things.

How did your love outdoors and those first turns on Arctic Valley inform you as a photographer?
I would say just growing up in Alaska shifted my perspective. Beauty was literally all around me. So it was natural to embrace it. I was into art, I liked to draw, write poetry and explore (enter awkward teenage phase here) but picking up a camera helped me show the world how I see it and I could share it  with others but it was a teacher, Ms. Jackson saw I had talent and encouraged me to pursue it. Having someone believe in me gave me confidence. So it was more my teacher revealing a career path of creativity instead of pushing me to pursue some mainstream job as a lawyer or doctor. Arctic Valley was great though. They offered Military dependents a season pass for $200 and they had a ski bus that would pick up all the kids in the neighborhood after school for night skiing.  I learned a lot through repetition because wed – sun I was at the hill everyday.

What advice would you give your younger self?
I would probably say seek out older mentors sooner. Having solid advice from those who have been there and done it will save you a lot of setbacks and heartache. Inside winter sports it was pretty hard because most of the time I was the only Black person but meeting people from different walks of life and backgrounds helps shape perspective. Don’t be afraid to ask questions and never assume anything.  Don’t be so set in your ways that you resist change. Life is an evolution and we are all constantly growing. It’s having a mindset of being open to change and a willingness to do better.

Congratulations on your appointment to SIA, how has that appointment on the board informed your most recent cover shoot?
Thank you and I think it was the first time I’d seen an established outdoor organization recognize what I’d done in the winter sports field and respect it. For years I could tell people I grew up in Alaska, went to school in Montana and have a degree in photography but the moment I entered a room and people saw I was Black inevitably someone would ask  “are you sure you know what you are talking about?”  Those attitudes are what eventually drove me to leave my past behind to move to New York and reinvent myself in advertising photography. No one there or in LA where I currently live knew about my past and I was fine with it. But sometimes life comes at you from leftfield and suddenly people remember your accomplishments and you get a phone call. That’s what happened with The Black Issue and Snowboarder.  In the wake of George Floyd and America’s racial reckoning, people in winter sports needed advice from a voice they’d shunned so many times before.  The real reason I came back to the fold was to show new Black creatives and athletes how to hold their heads up high, to tell their stories through their mediums and to be fairly compensated for their work.  So many Black creatives and athletes  were being exploited for brand clout without clear objectives for diversity and equity so now being on the Board of Directors for an entity that talks directly to that industry, they value my opinion and it gives me a wider reach so my experience can help fill in the potholes and roadblocks the youth following in my footsteps might have hit.

The Art of the Personal Project: Jason Lindsey