The project started out as a personal project. When a close relative of mine passed away, my sisters, father, and I accompanied her husband to return her ashes to her homeland in southeast Alaska. I am Kaigani Haida and had been studying the art intensely at the time when she passed. I proposed this project to Fernando and he said something like, “if you can get the artists, you know I’ll make the pictures.” So, I started reaching out to people to see who might be interested. At that point, we were just thinking that it was going to be a portrait project and we’d make some nice pictures for the artists to have of their practice. After I had a few very well-known artists and the support of the Totem Heritage Center and Sealaska Heritage Institute, I reached out to Jeff Campagna at Smithsonian Magazine. Fernando had worked with him a couple of times before, and it seemed like a great fit. He seemed interested, and of course, it’s an organization, so there was a process. We were thrilled when they eventually said they wanted to pick up the story.

Covid-19 presented some challenges that made it impossible to see some of the artists that helped me the most on the research end. David R. Boxley and Kandi McGilton are two artists that are doing amazing work in Metlakatla. Hopefully we get to see them next time! We are really happy with how the project turned out. The captions that are included were published in the magazine, I worked closely with them to write them.

Among the indigenous nations of Southeast Alaska, there is a concept known in Haida as Íitl’ Kuníisii—a timeless call to live in a way that not only honors one’s ancestors but takes care to be responsible to future generations.

The traditional arts of the Haida, Tlingit and Tsimshian people are integral to that bond, honoring families, clans, and animal and supernatural beings, and telling oral histories through totem poles, ceremonial clothing and blankets, hand-carved household items and other objects. In recent decades, native artisans have revived practices that stretch back thousands of years, part of a larger movement to counter threats to their cultural sovereignty and resist estrangement from their heritage.

They use materials found in the Pacific rainforest and along the coast: red cedar, yellow cedar, spruce roots, seashells, animal skins, wool, horns, rock. They have become master printmakers, producing bold-colored figurative designs in the distinctive style known as “formline,” which prescribes the placement of lines, shapes and colors. Formline is a visual language of balance, movement, storytelling, ceremony, legacy and legend, and through it, these artisans bring the traditions of their rich cultures into the present and ensure their place in the future. 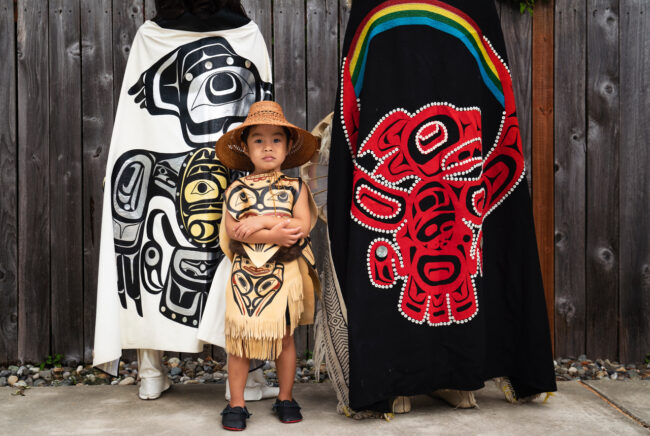 David A. Boxley and Michelle Boxley pose with their grandson, Sage in regalia. The regalia they are wearing was designed by David and made by Michelle. They are part of a dance group called Git Hoan that has traveled internationally performing traditional dance and song from Northwest Coast tribes. 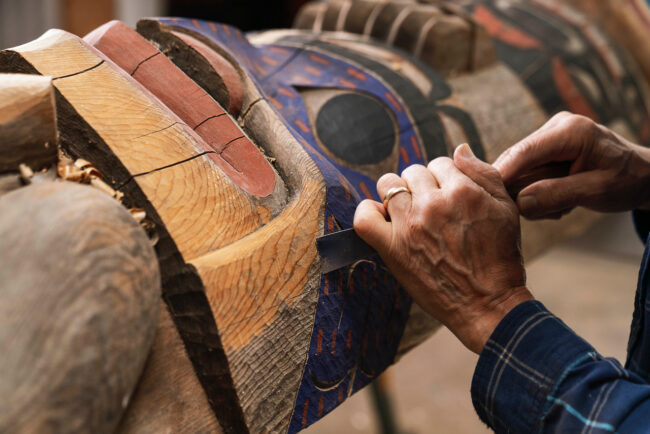 David A. Boxley carefully restores a cedar house pole that commemorates his journey as a father bringing up his sons David Robert and Zachary in the Tsimshian culture. 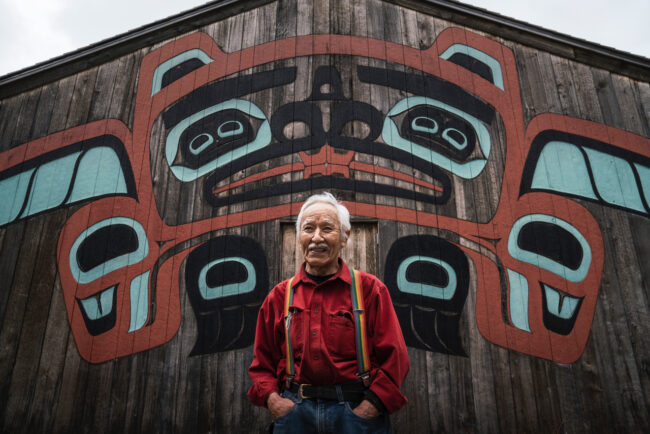 Nathan Jackson, a Chilkoot Sockeye clan leader, in front of a Beaver Clan house screen that adorns a longhouse at Saxman Totem Park. The house screen was carved on vertical cedar planks before it was raised and assembled on the house front. Jackson, who led the project, found his way back to his heritage circuitously after a boyhood spent at a boarding school that prohibited native languages and practices. 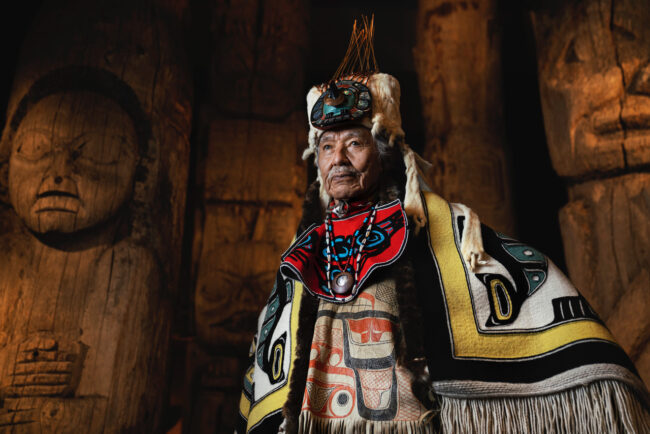 At the Totem Heritage Center in Ketchikan, Alaska, Jackson wears ceremonial blankets and a headdress made from ermine pelts, cedar, abalone shell, copper and flicker feathers. 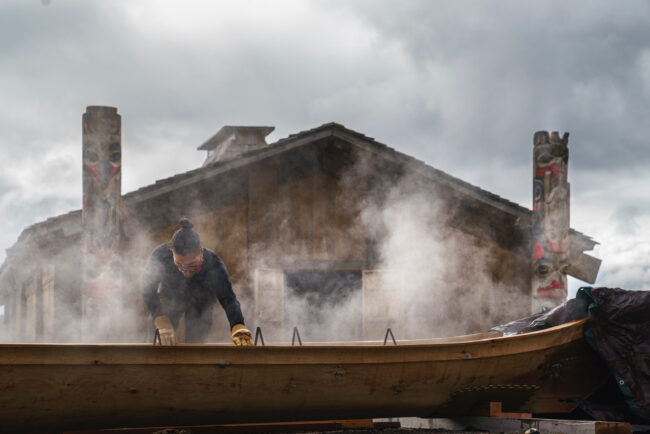 Sgwaayaans and his apprentices heat lava rocks that will be used to steam the wood of a traditional dugout canoe; the heated lava rocks are lowered into a saltwater bath inside it, to steam the vessel until it is pliable enough to be stretched crosswise with thwarts; more than 200 tree rings in the Pacific red cedar are still visible with the canoe in its nearly finished form; Sgwaayaans strategically inserts the crosswise thwarts and taps them into place with a round wooden mallet to create the desired shape. 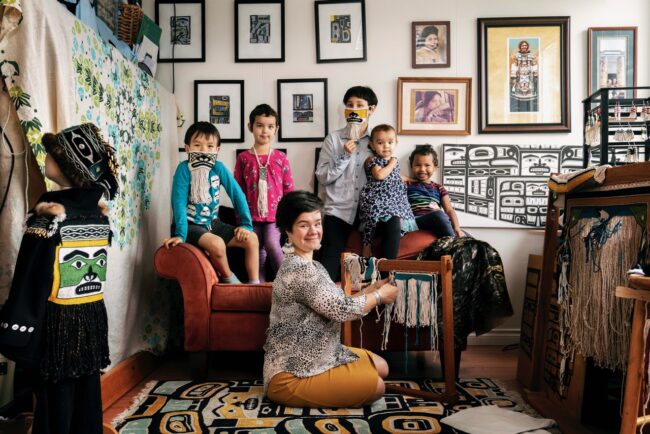 Lily Hope, a designer of Chilkat and Ravenstail textiles, lives in Juneau with her five children. She is seen weaving Tlingit masks during the Covid-19 pandemic. Hope is well known for her ceremonial robes, woven from mountain goat wool and cedar bark, and often made for clan members commemorating a major event like a birth, or participating in the mortuary ceremony known as Ku.éex, held one year after a clan member’s death. An educator and a community leader, Hope also receives “repatriation commissions” from institutions that return a historical artifact to its clan of origin and replace it with a replica or an original artwork. 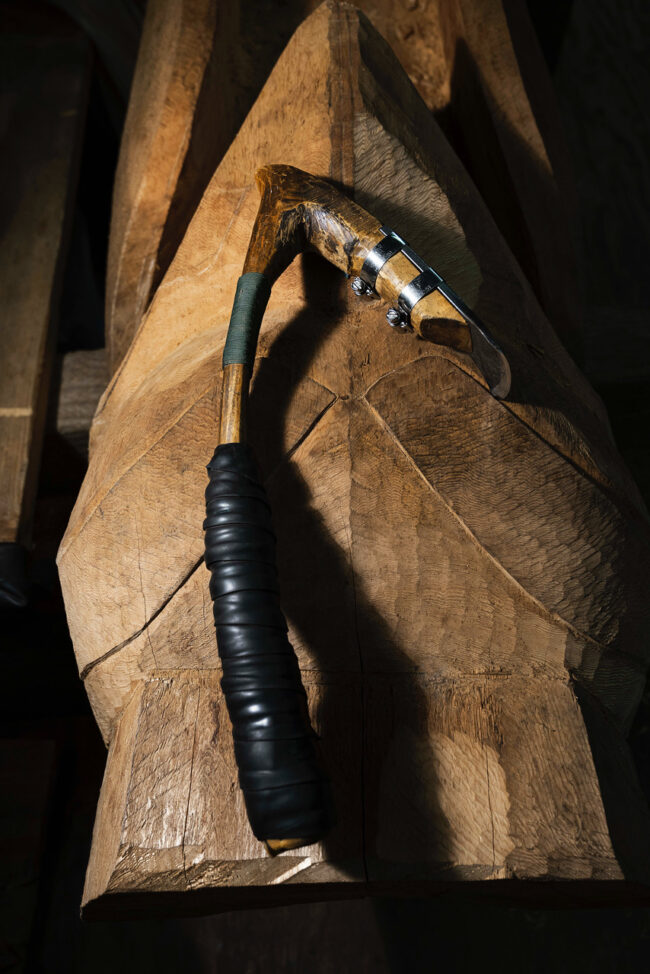 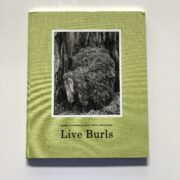