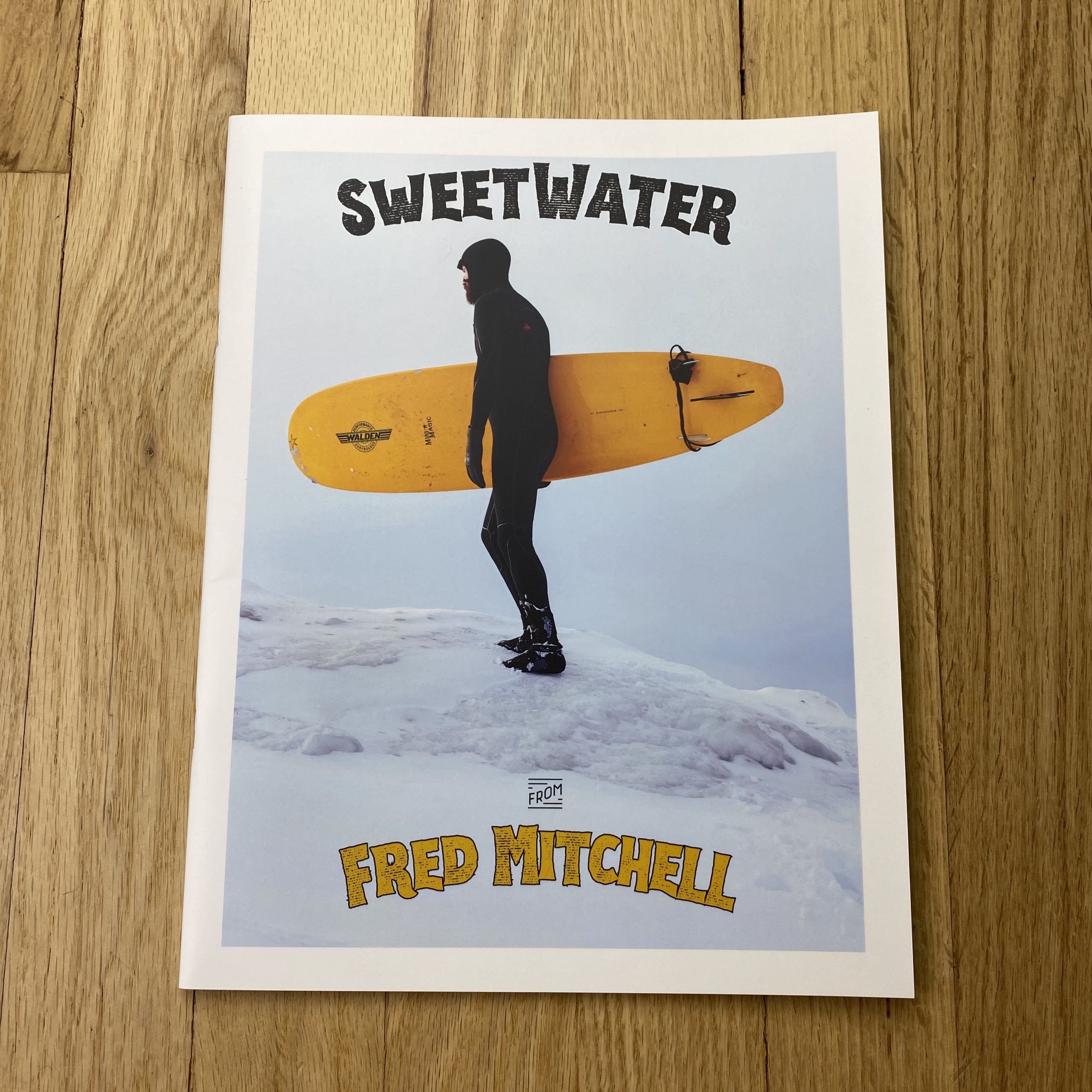 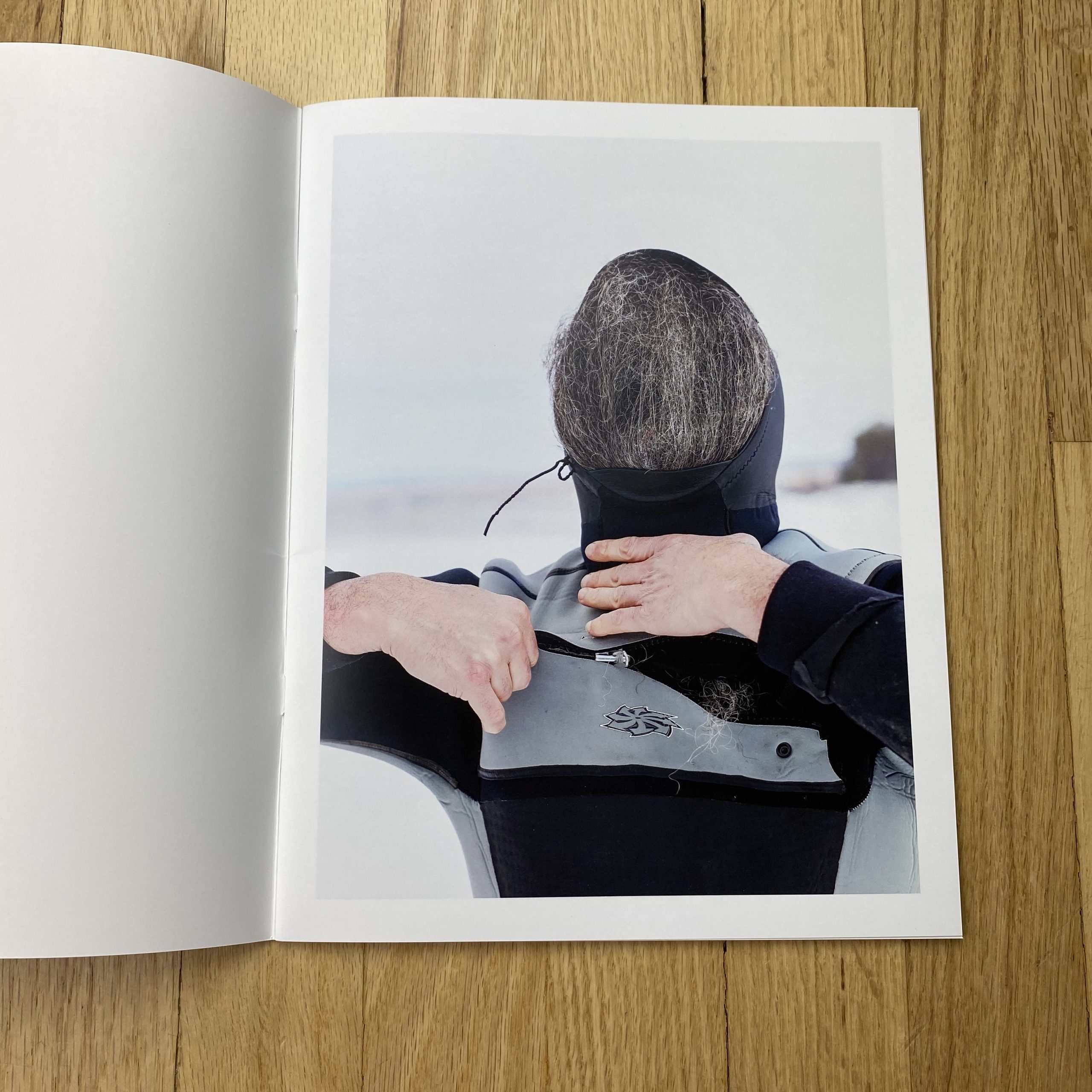 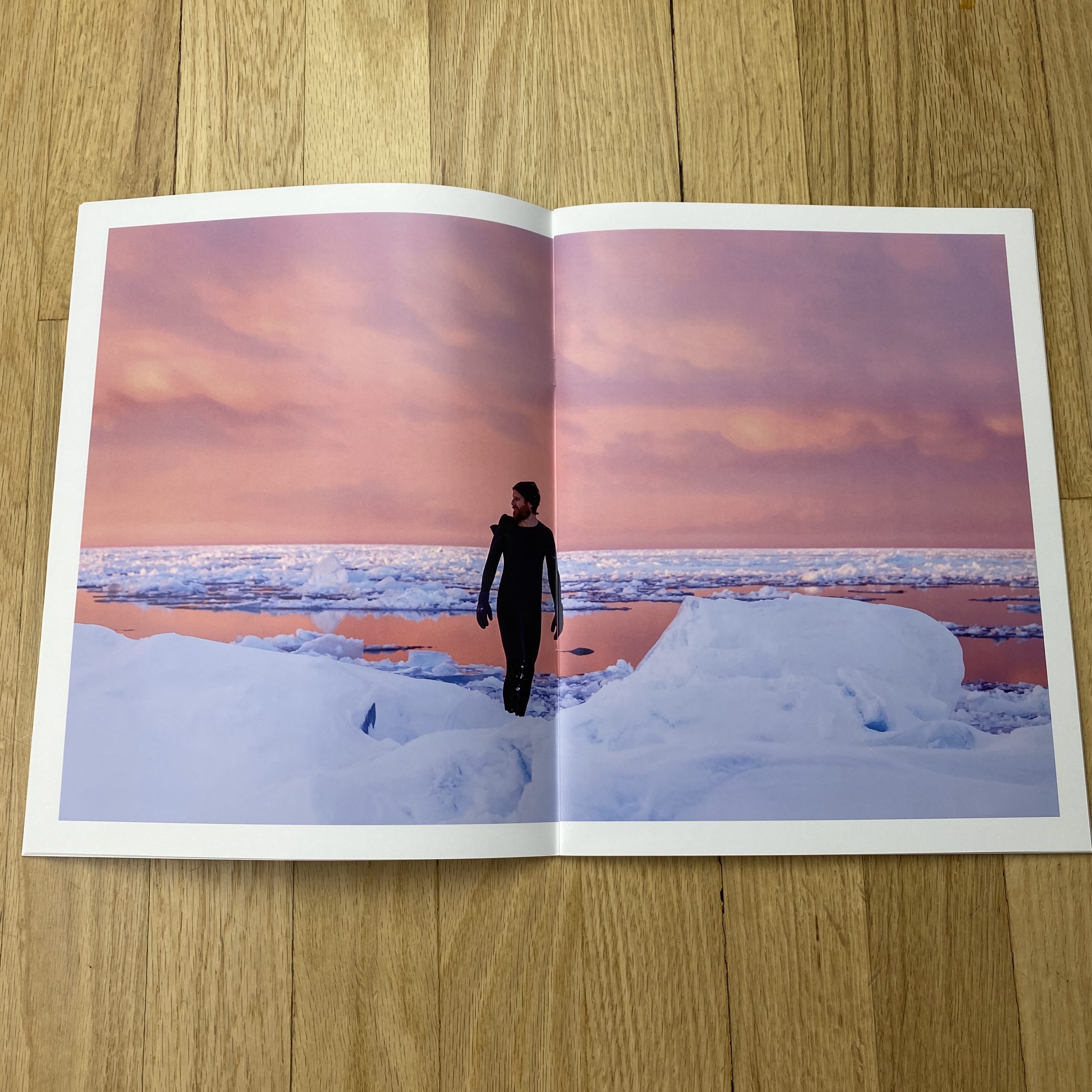 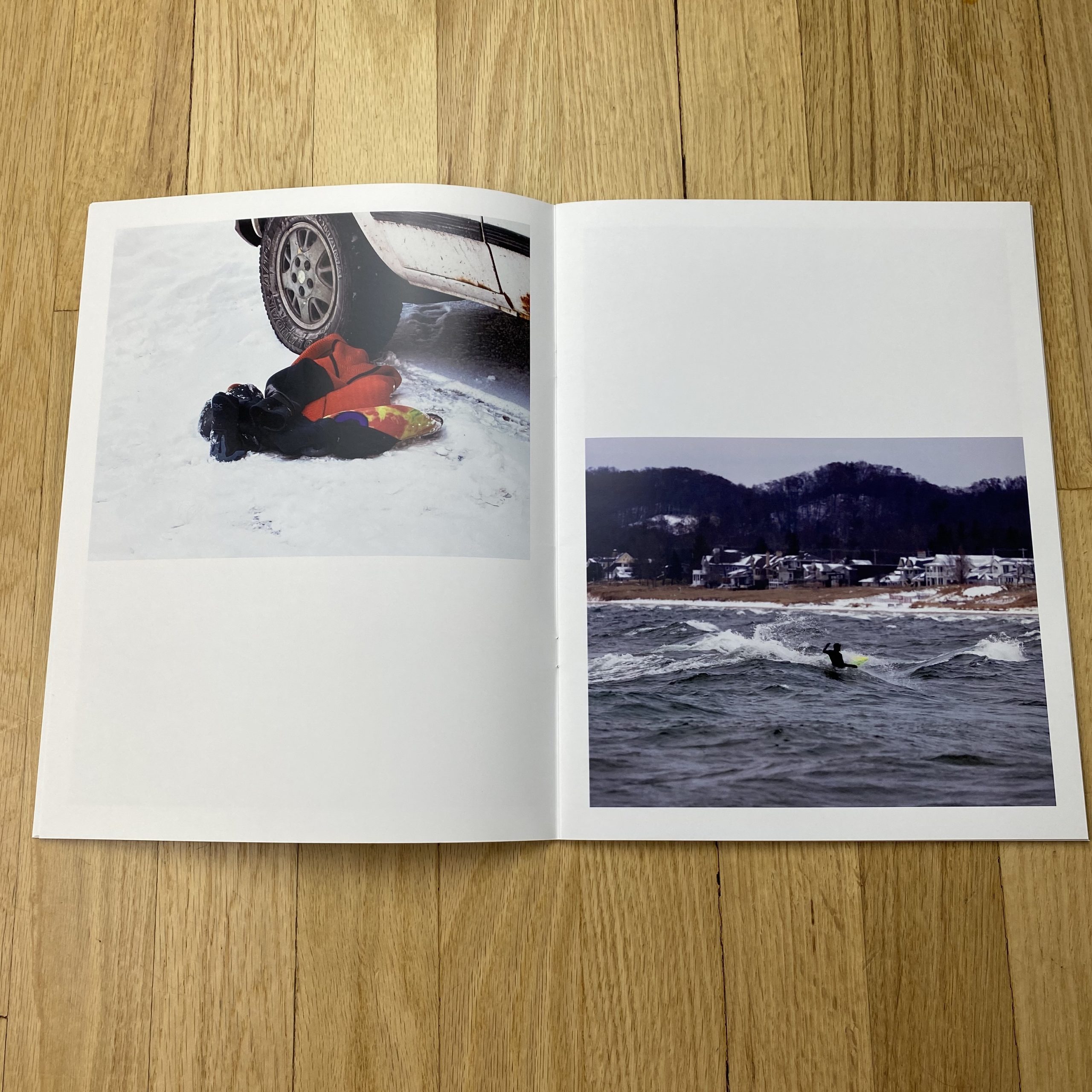 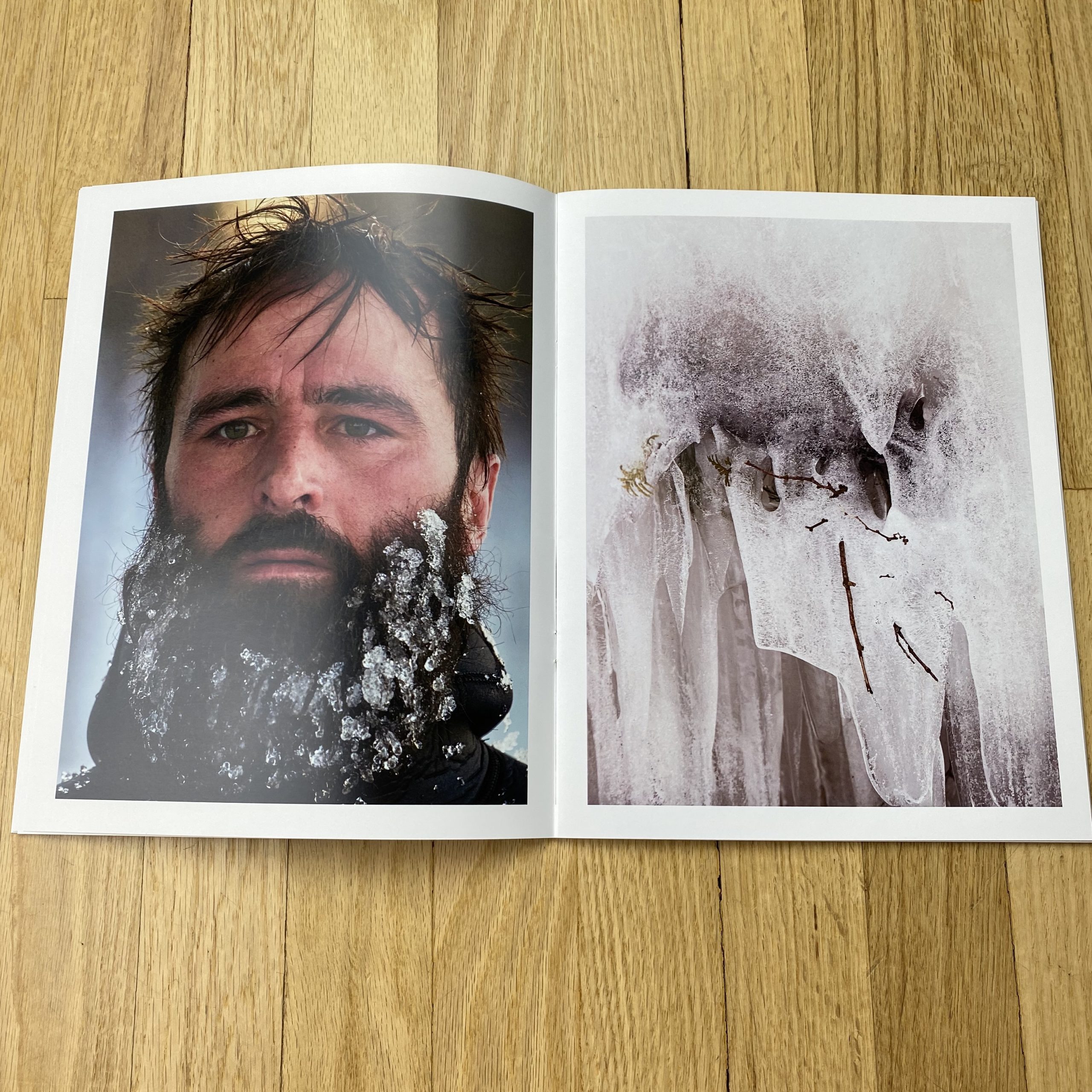 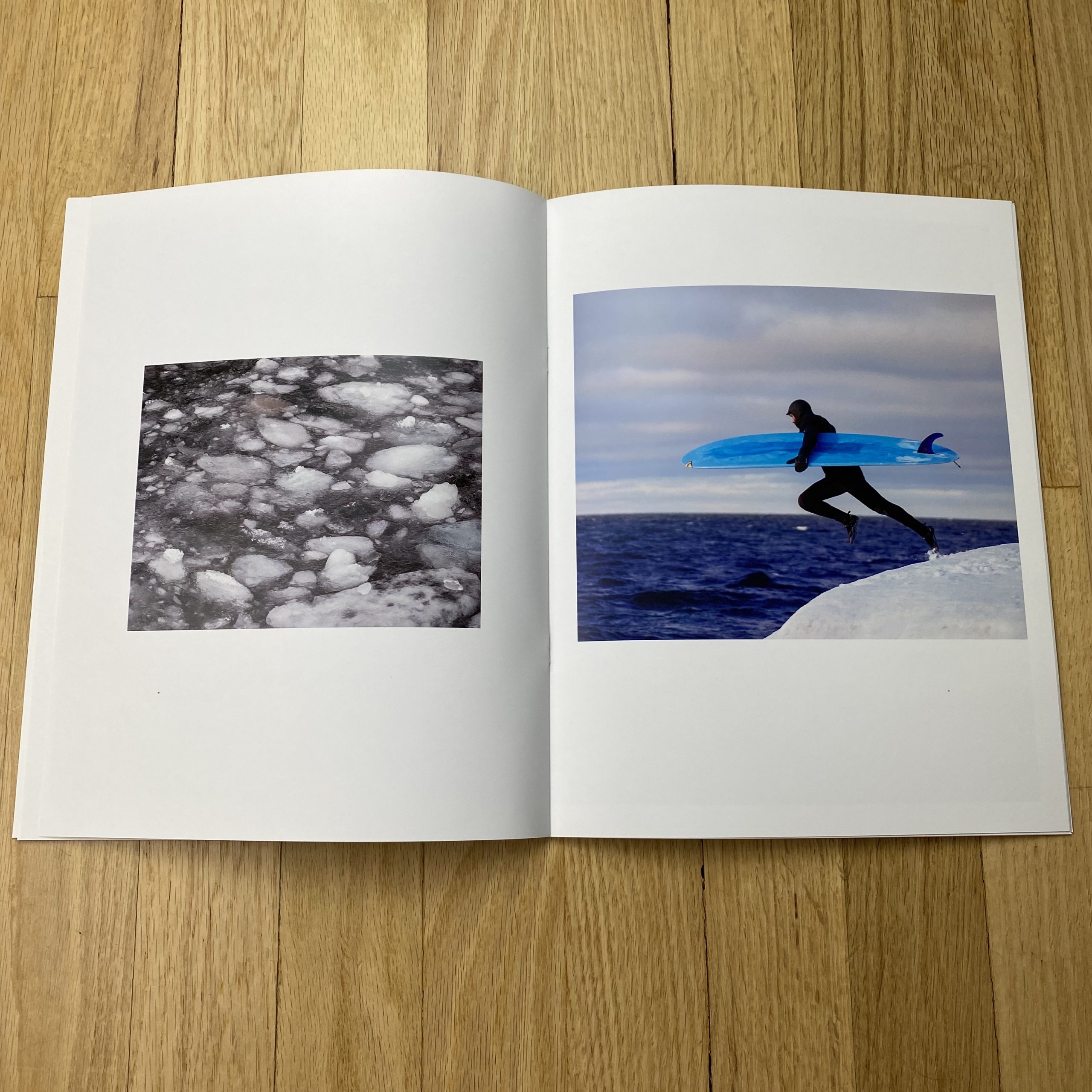 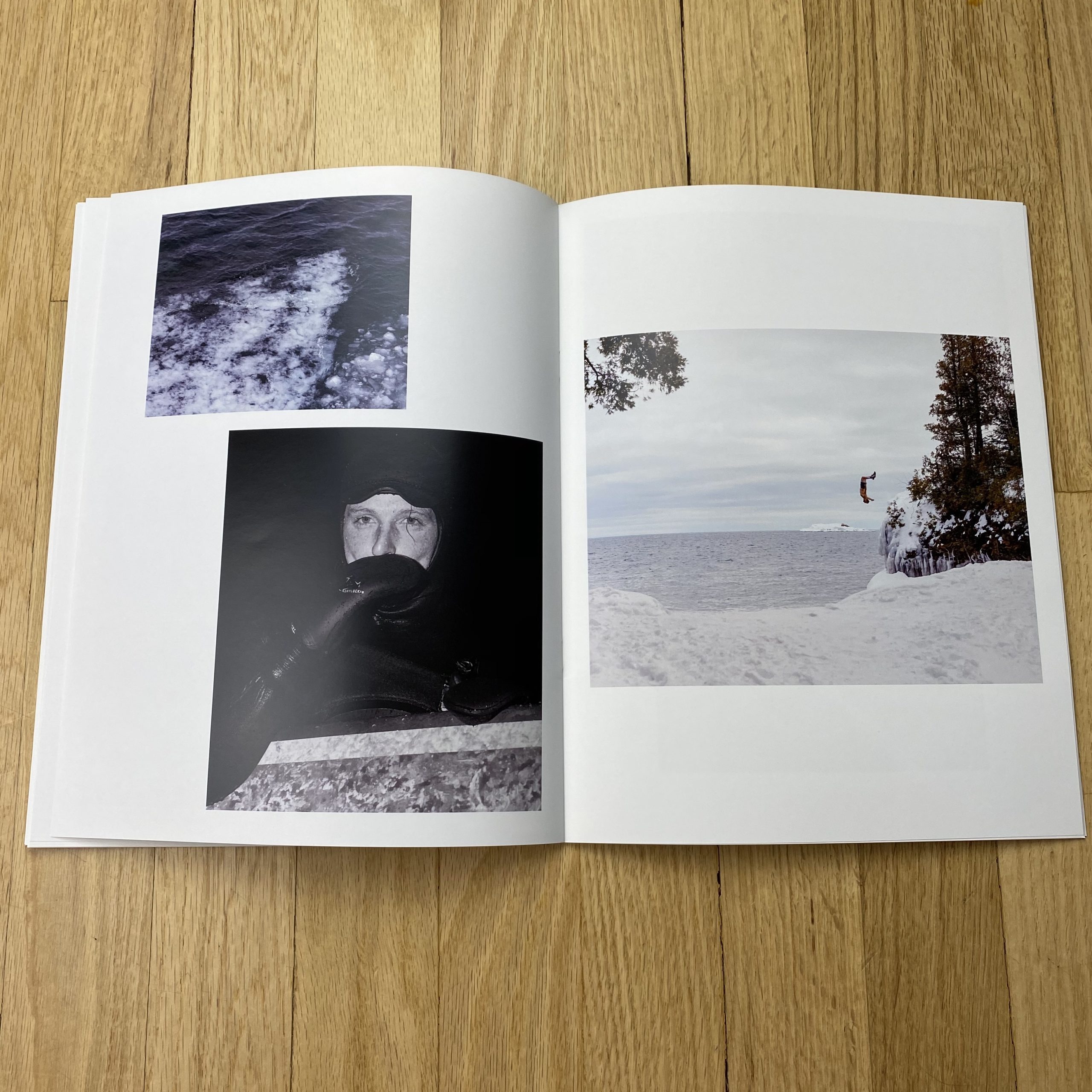 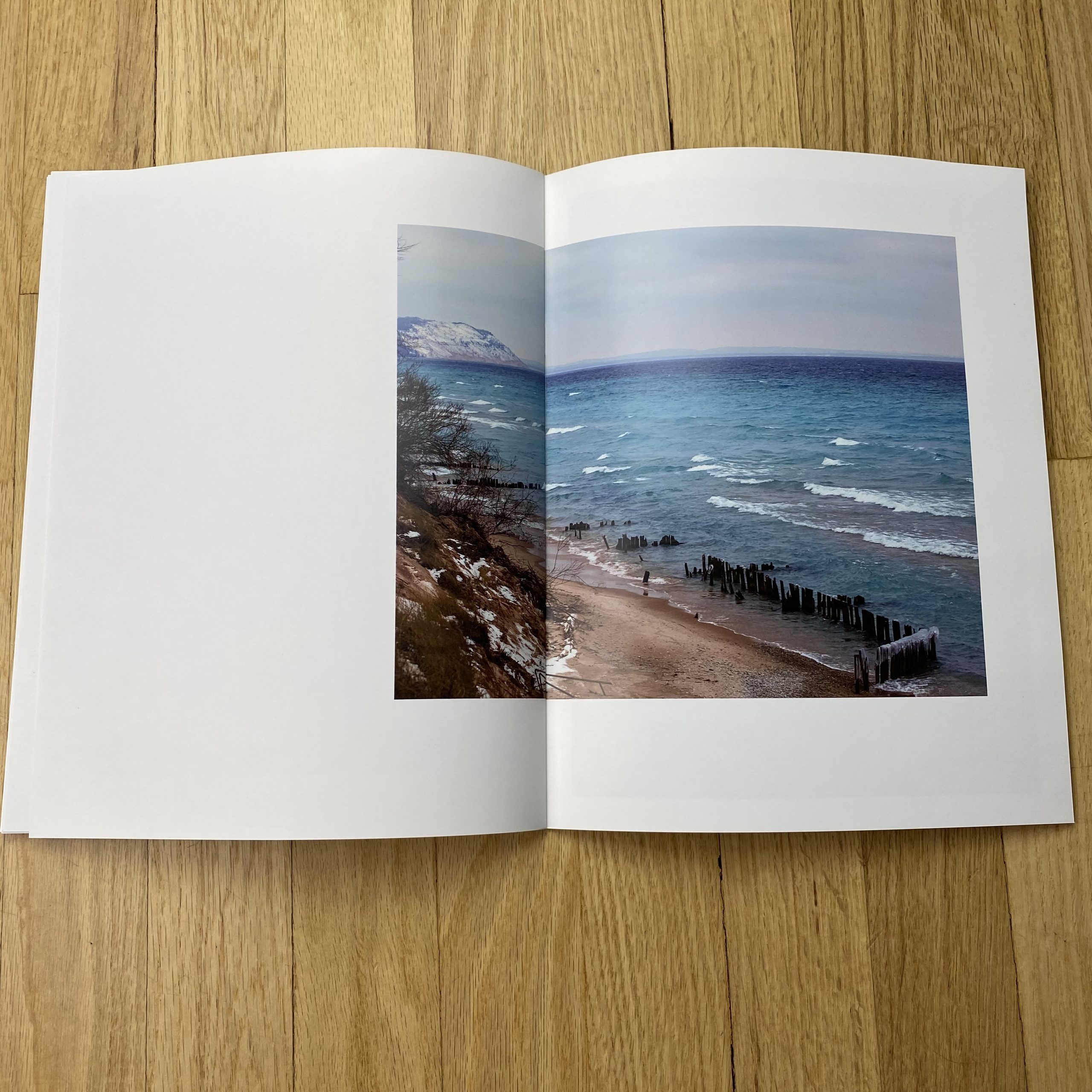 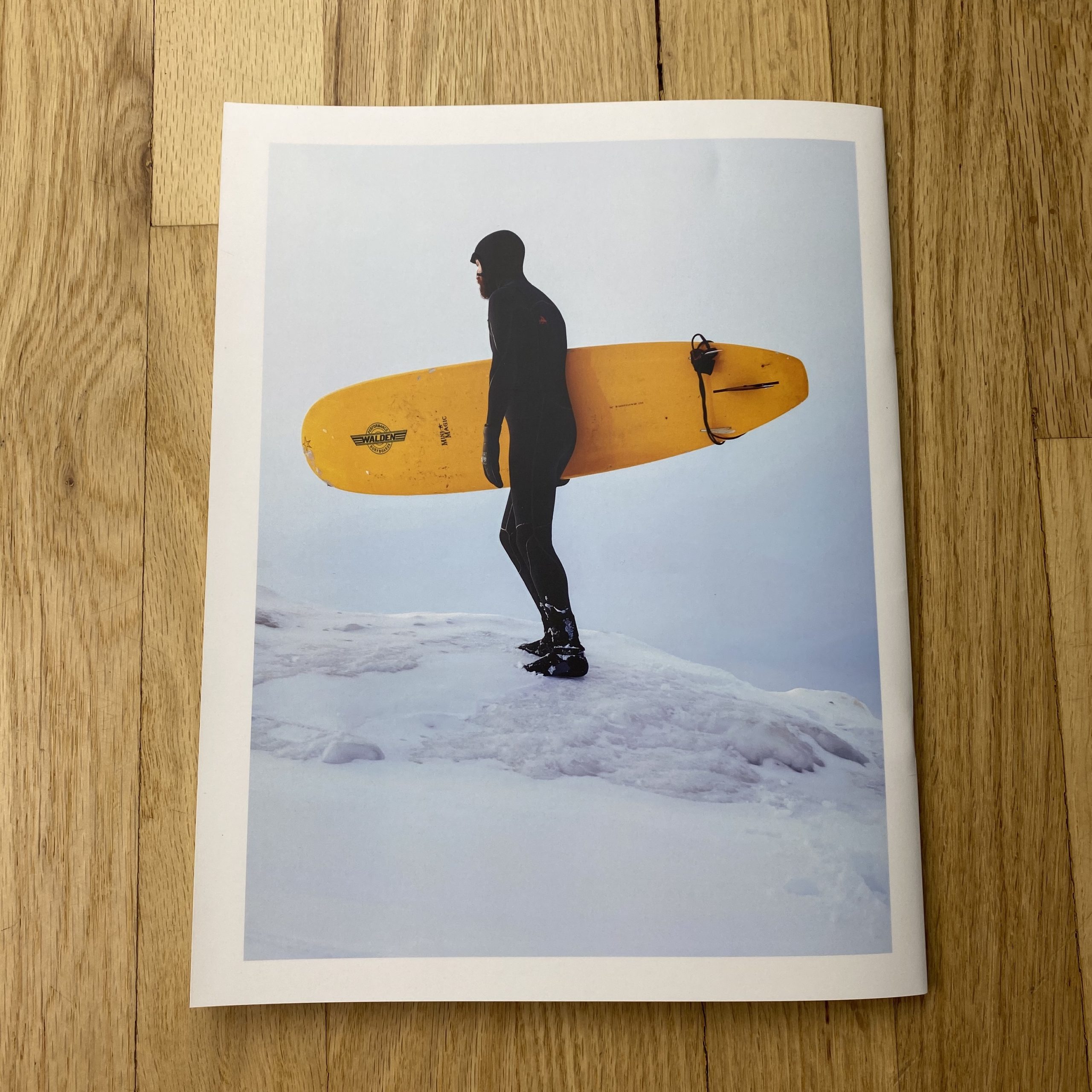 Tell me about this promo.

I had it printed in Los Angeles at a place called Nonstop Printing. I actually found them when I was doing my wedding invitations last year and they were really pleasant to work with. So when I was looking at making these promos, I asked a friend who works with Curran Hatleberg for his maquettes with TBW books and he ended up pointing me back to Nonstop Printing for cost efficiency & quality. With them I did an ed. of 25, which I mostly used for marketing at photo fairs and conferences, but once the pandemic hit I had about 12 leftover and so I decided to offload the rest of them. I designed the book myself and did all the typography, layout and sequencing. This is actually the first time I have ever sent any printed media out blindly, but during the pandemic I started sending a digital PDF of recent work which includes this project (which is ongoing) along with some other ongoing personal work. If you’d like to check that one out, here is the link to that.

I believe in the printed object within the photo community, but I am also a strong advocate for photobooks. Most of my personal work is project/series based so a lot of it has turned into book projects. I actually have a book coming out through Yoffy Press that was set to be released this fall, but with the pandemic, it may get pushed back slightly. (Here is a link to that one) With my small bit of experience talking with commercial clients/agents, I have found mixed emotions on printed vs. digital portfolios. But a general consensus seems to be that if a project is intended as a book or zine people do seem to react positively to it rather than a digital portfolio. That being said, I try to have multiple tailored portfolios for different forms of marketing. So when I have done meetings, if it is with a photo editor, I try to lead with giving them a printed object they can keep and I let them know that they don’t have to look at that with me because it is for them to take away. Then I segue into a digital portfolio on an ipad which I also let them flip through at their own pace. When I was doing meetings with publishers to try to find a home for my upcoming book I also brought with me the hand-bound maquette of that project as well, but I have only a few copies of that one. That being said, people also responded positively to that and every now and then I will bring that with me to set if I am working with a client that I have a relationship with to let them check it out because it is a rather unusual project where the tactility and physicality are part of the concept.

I suppose for my work, if there is a reason the project should be printed then I try to do it, but I always want to make it something special. I have another project I am currently developing with my partner and fellow photographer, Alan Nakkash, that is also going to be a physical magazine/promotion tool. Part of our thinking was this is a special opportunity to make something different that gives us a reason to reach out to photo editors and potential clients. Additionally, our intention is for this to be a long term project where with each issue we create a visual dialog & narrative between two new featured artists. At this stage, a large part of this project highlights photographers similarities and differences in their artistic processes. This results in something truly collaborative because one artist takes the other artist’s work and they build the layout based on their interpretation of said work. So when this is printed it will continually evolve with each issue, thus giving a reason for us to frequently send these promos, and also hopefully help under-represented artists get their names out into the world. Sorry for such a long-winded explanation of my enthusiasm for printed matter haha!

Finally, the stories behind the images in Sweetwater. Inevitably, each image tells a story of its own, so I will try to give general context and then highlight my favorites so I hopefully don’t bore you!

I grew up skating and that largely shaped my life as a young adult. California was a dream to me because it always appeared that this was where all the best skating happened. But as I grew up and eventually moved out west (first to Las Vegas where I did my MFA and taught college for about 3 years) I was terrified to visit this place I had dreamed of. When I finally did come out here it was just as incredible as I had imagined it would be. But I didn’t move here as quickly as I would have hoped. At the time when I had the opportunity to make the move, my (now) ex-girlfriend’s mother had been diagnosed with cancer, so we instead moved back to Alabama to be close to her family. The relationship didn’t last, and I ended up leaving the academic world when I was offered an in-house photographer job at a fashion brand. After three years of working in fashion as what turned out to be an art director, I met my now wife who lived in CA and I drove west. That first few months was tumultuous to say the least. I sold my camera equipment to have enough money to buy food. I lived in my car for the first 5 months or so, then I found a room share on Craigslist where I slept on a massage table. And finally I got my own apartment. Because I had spent the past three years learning the ins and outs of the fashion world, I found a place working as an unpaid intern at Milk Studios. I think it was the week that I was finally hired that I found out my father passed away. For fear of losing my financial security, I was unable to go to the funeral. Then my mother ended up undergoing brain surgery to remove a tumor (which turned out to be benign) but I was also unable to visit her because I would have lost my job. My coworkers became my surrogate family. We worked overnight from 3pm-8/9am, doing backbreaking work (literally, one of my coworkers broke his back on the job). Another person nearly lost a toe, and I fractured or broke my heel when it was run over.

It was at this job that I began meeting many people transplanted from the midwest great lakes area. I didn’t know much about surfing but it always felt similar to the skating world. As I got to know these new friends they boasted of the surfing on the great lakes. Specifically how incredible but brutal the peak surfing season could be. I spent about 9 months researching this before my first trip to Lake Superior. I suppose my mentioning all the difficulties leading up to this because it informed where I was mentally & emotionally when I started this work. Essentially, I was broken and unsure about life, let alone making photographs. I had been fired from my position as night-time equipment manager at the studio and still without a camera, I told myself that if I got a flight and rented gear, I had to do it. I was photo assisting full time so I worked extra to save enough money for this trip and suddenly I was thrust into the frigid mid-western winter. I treated it as I had treated skating trips as a kid. I contacted friends of friends who introduced me to other people and I began making my way around the upper peninsula of Michigan. Across the Wisconsin Coastline on Lake Michigan. Over the Mackinac Bridge (terrifying to drive over in a white out). All over the Mitten that is Michigan. Whenever I encountered new people, they would always ask where I was staying and offer me a couch to sleep on or a spare bedroom. Literally the opposite of my experience in California when I was homeless. And then there is the surfing. I wanted to craft a narrative that was true to the experience and community. An experience consisting of days we would go out and find nothing but ice. Other times there were long fantastic sessions ending with long frozen ice beards and hair. All of these days, filled with incredible people in a foreign frozen tundra.

The day that stands out most to me can be seen in the image of the girl with the bloody lip. Her name is Jaime, and we had corresponded through text messages for about a week or so before meeting. On the day we were finally set to meet she told me that she was uncomfortable meeting with me alone because for all she knew I could be a crazy person. So I told her that I totally understood and if she wanted to bring someone along with her to feel more safe that would be more than fine. So Jaime agreed to meet and arrived with her springer spaniel Murph. We talked and snapped a few photos while Murph ran around the frozen beach. Eventually, while we were talking we realized Murph had made his way onto the icy break. He couldn’t figure out how to get back and he was more than comfortable swimming in the cold water. But instead of jumping into the side with open water, he leaped into the side of the break that was mostly chunks of ice. As Murph began to panic and try to get onto the ice we ran toward him. Jaime was in her wetsuit, but hadn’t put on her gloves yet. She entered the water and began to try to help her dog from drowning. I was close behind her but I had fallen making my way across the icy break. As I made it to the ladder Murph was pushing Jaime underwater and her hands were beginning to freeze. I threw the camera aside and climbed down the ladder as Jaime pushed Murph toward me. I grabbed him and helped him back onto the land but Jaime’s hands weren’t working anymore. We linked our arms at the elbows and I pulled her up and as I did blood streamed down her face. As Murph trotted back to the beach I first asked her if she was okay and she said she was alright, just glad Murph was safe. Then I told her that her lip was bleeding, and she asked “how bad?” I told her it was okay probably. Immediately she responded, “well, do you wanna take a picture of it?”

Honestly, most of these photographs are stories like this. Rental cars having blowouts in the middle of the night. There was a time some friends accidentally blew up a propane heater inside of a van (photograph of the orange wetsuit next to the van tires). Falling asleep inside camper vans in sub-zero temperatures (boards storage photograph with the plywood room). Late-night talks of philosophy in relationship to surfing while drinking freshly harvested chaga tea. Moments that felt like I was talking to Gary Busey’s character in point break when he jumps on the desk (someone literally did this haha). I could go on but I don’t want to bore, and if I have, then I apologize. It’s all really fun to discuss and relive for me.

This Week in Photography: I Have A Dream