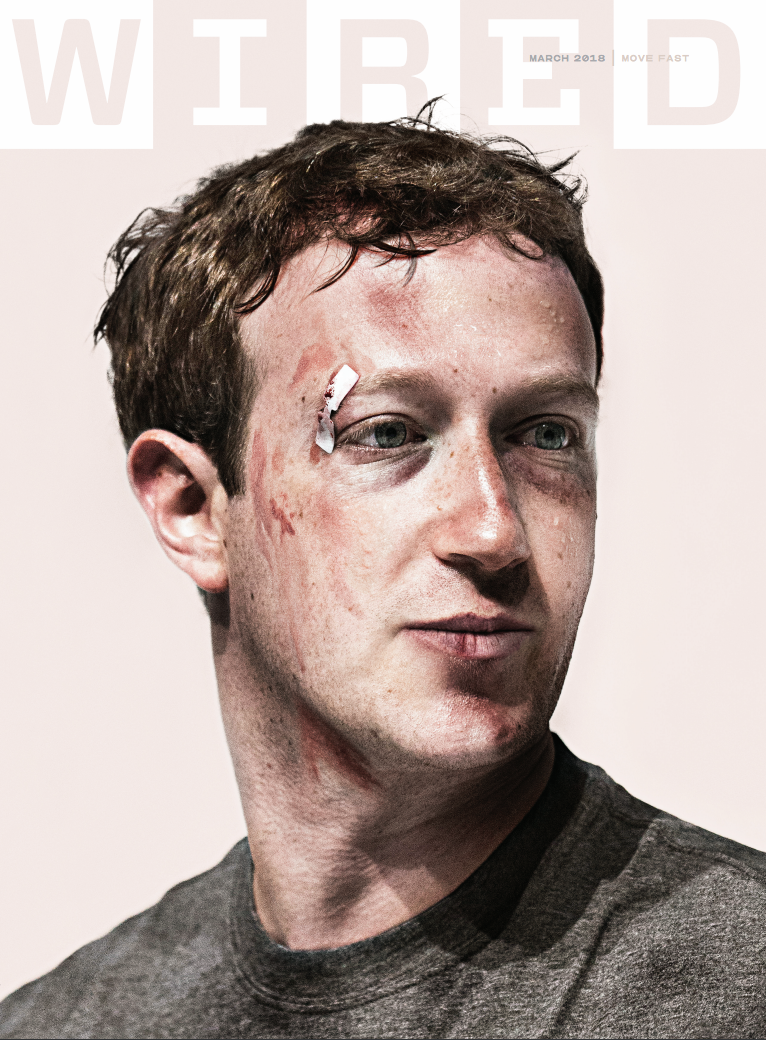 Heidi: The blurred lines between fact/ fiction, fake news are the essence of your work. Tell us how this cover came about.
Jake: The Mark Zuckerberg cover for WIRED came about when the deputy design director of WIRED Frank Augugliaro contacted my colleague David La Spina at Esto, who I’m working with on a new digital imaging studio in New York called Light Manufacturing, and he recommended me for the job. The team at WIRED– David Moretti, Frank, Anna Alexander- wanted a portrait of Zuckerberg looking beat up to reflect the beating he was taking in the media post-Trump’s election. I didn’t know the details of Nicholas Thompson and Fred Vogelstein’s article but was already well aware of Cambridge Analytica’s interference in the election via Facebook through my activism in New York. So it was very exciting to create the piece. I really could not have hoped for a better editorial project since the topic of “fake news” and fact vs. fiction online dovetails perfectly with my digital composite work in portrait photography.

The team at WIRED was amazing to work with and the cover took about a month to complete. The final image is a composite made up of four different photographs: two stock photos and two photographs I shot myself. I hired two models and did the “beat up” make-up myself. I used my photos for the sweat, blood, bandage, etc. and the stock was the main image of Zuckerberg with some manipulation to shape his expression.

Tell us how this style developed for you.
When I started to work with photography I experimented with double exposures, darkroom manipulation, collage and finally began working with Photoshop. It was a natural progression in my personal work over many years. I’ve also been a professional retoucher for over a decade in New York and have worked on a wide variety of mainstream commercial and advertising imagery.

Do all of your portraits involve a casting and a shoot?
No. I mainly work with family and friends in my personal work.

Fact and fiction are blurred with this type of work, how much of what you create is commentary on our media landscape?
I became interested on making a statement about the line between fact and fiction in photography with my family photos starting around 2004. I felt that creating seamless, extremely life-like fictional photographic portraits and making large scale, detailed prints the viewer could walk up to and be convinced what they are seeing is real would be a flash-point for creating a dialog on the subject of fact/fiction in photography, digital media and other technologies as well. Lately, bio-technology is an area that I think about a lot with regards to this work. That’s an area that is obviously going to be rapidly developing in very unpredictable ways in the very near future.

In your eyes, are there any truthful images in the media?
The jury is out on that one.