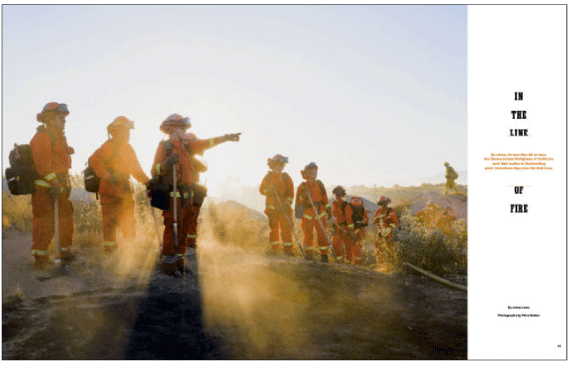 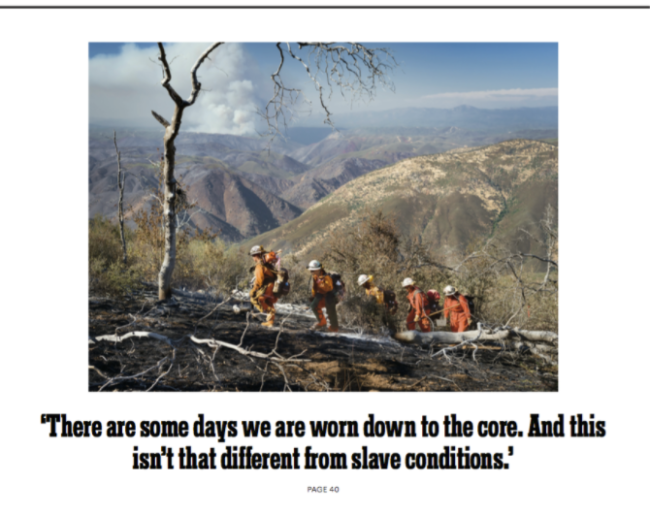 Heidi: What were some of the challenges shooting these female firefighters?
Peter: Fires are obviously unpredictable and dangerous, so this story was difficult to shoot. I started shooting in September of 2016, and I spent much of that October watching for a fire that would involve the Malibu Camp 13 crews. It was an unexpectedly quiet fall, so I wasn’t able to shoot on a fire. Jamie Lowe, the writer, kept working on the story, and this summer I got lucky (if you can say that in regard to wildfires) while shooting Rainbow Camp–they got called out to two small fires while I was there. About half the story was shot on that day. Later on, I was also able to accompany the Malibu crews on the Detwiler fire near Mariposa, CA, and spent an entire 24 hour shift with them, which was an amazing experience. Each day required access to be coordinated through California Department of Corrections and the LA Fire Department or CAL FIRE, and then there is the double-edged sword of fire, which needed to be present but not too dangerous. It was rare for circumstances to align just right.

How much interaction/conversation did you have with them women?
There were some quiet moments in camp or while we were hiking when I was able to have some pretty deep conversations with the women. I was intensely curious about their experiences, and I think the women sensed that and opened up–after all, this was a radically new and different life for most of them too. Most of the women justifiably take a lot of pride in their work and were happy to have me there. I was moved by many of their stories. I could have kept shooting this story forever.

How much support did you get in order to track the fires?
None of it would have been possible without a lot of legwork by Christine Walsh and Karen Hanley at the New York Times Magazine, along with a ton of support from Bill Sessa at CDCR and Chief Stukey at LAFD, who helped us with access. Many people at CDCR, LAFD, and CAL FIRE went out of their way to get me access, and I was blown away by the care and respect they showed for the inmates. Jamie Lowe wrote a powerful story and laid the foundation for the photos. And finally, the women themselves welcomed me into their lives and gave me tremendous access. I’m so thankful to everyone.

Did you pitch this story to the NYT?
No, the New York Times Magazine came to me with this story, for which I am tremendously grateful. A couple of years ago, I spent a year or two working with the National Interagency Fire Center, trying to get access to shoot hotshot crews, and I had pitched the story to the NY Times Magazine. While that story never went anywhere, I think it planted the seed that I was interested in wildfire fighters. My discussions with the NIFC were also useful when it came to understanding what would be required to get onto the fire ground for this story.

How has your love of the outdoors influenced your work and your ability to get adventure assignments.
The outdoors are a huge part of my life–I grew up hiking and camping, and after college it was a toss up whether I would go into photography or outdoor education (or engineering but that’s another story). On a practical level, the foundation of skills I have has really helped me in my work–you need to be comfortable in these environments to keep up with your subjects. In this story, for example, we were hiking off-trail in 100 degree heat wearing 50 pounds of safety gear, and I was glad it wasn’t my first experience with that sort of thing.

But more important, I think, is the connection I feel with nature. I love being in these places and hope that brings a richness to the pictures. Being outdoors is at the center of my life. It’s hard to overestimate the impact it has on my work.

How if at all did your upbringing influence your creativity?
My mother grew up in Switzerland, and I spent many summers there as a kid. I love Switzerland very much, but I neither felt completely at home there or in New Jersey, where I grew up. It is hard to say exactly how these experiences influence us, but I think I’ve always been searching for my place in the world, and I’m very interested in how place influences culture. I feel like this story is very much a part of that thread–the lives of these women are completely shaped by the work they do in the rugged and fire-prone California landscape.

How has cooking shaped you?
I’ve gotten really into baking sourdough bread over the last year or so, and I’ve always liked to cook. I think there’s a real need for me to focus on something tangible and process oriented to balance out a photography career, which can be so unpredictable and ephemeral. I’ve noticed a lot of photographers are drawn to these sorts of crafts and activities–I’m sure road bikes and woodworking are in my future somewhere. After I’ve been traveling a lot, cooking and baking grounds me. I don’t feel like I’m really home until I’ve cooked a meal.

Do you make it a point to practice outdoor skills?
Yes, when there is time. For example, I’m a rock climber but I don’t specialize in climbing photography, so before I shot rock climber Alex Honnold for the NY Times Magazine, I spent a day on the rock practicing my rigging and systems. That kind of formal practice is unusual, but when I have free time, I’m up in the mountains.

Did you feel any pressure after being noted as an emerging photographer?
I don’t think pressure is the right word–I always feel a lot of pressure to make good work. But it was strange to achieve so many goals relatively quickly after a decade of trying to get any work at all. For better or worse, the first part of this year was really slow, which gave me time to focus on where I want my work to go, and to concentrate on a few projects I really believe in, like this one. 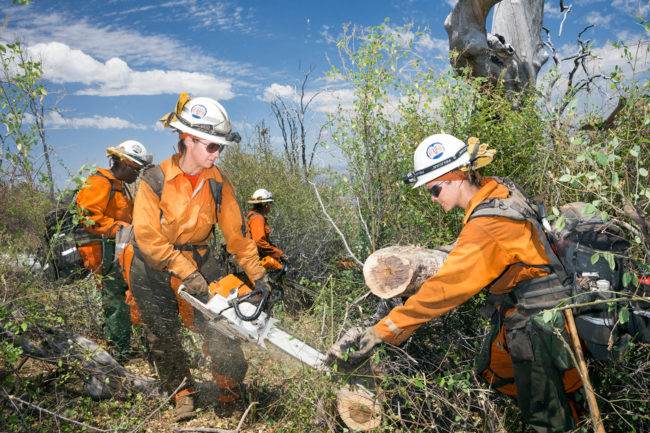 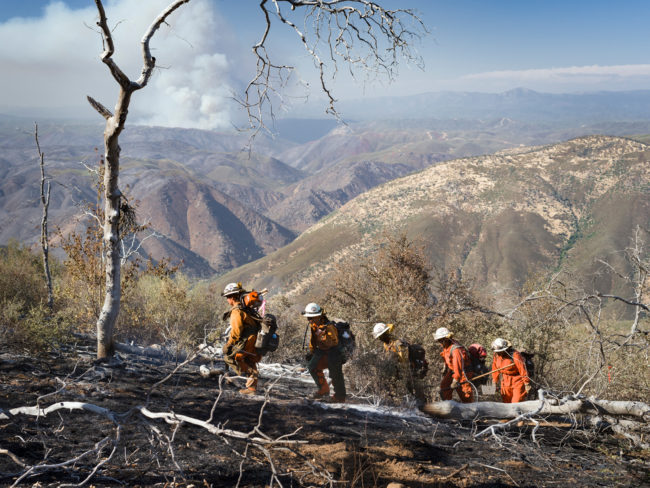 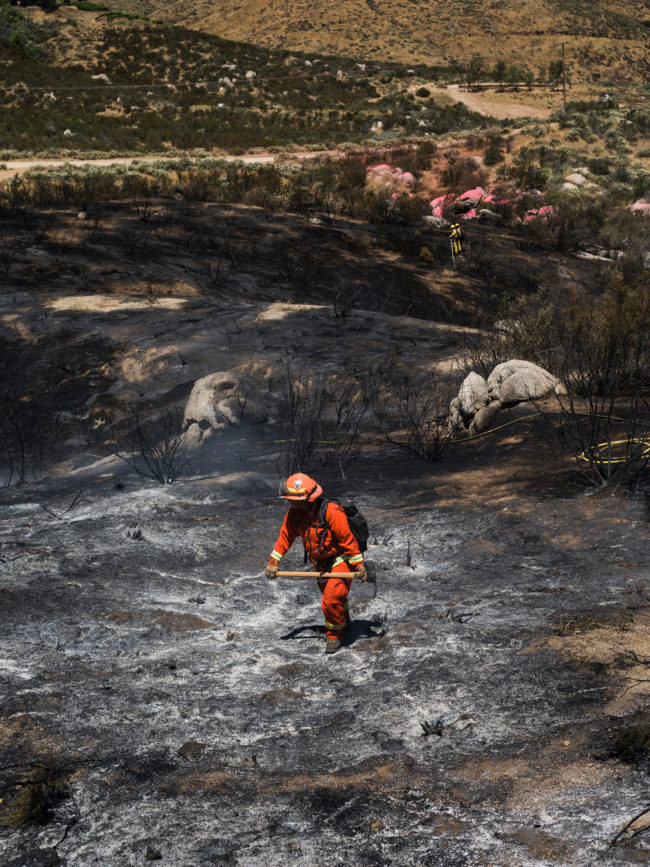