Licensing: Unlimited use of 12 images for one year

Location: A retail location in the northeast 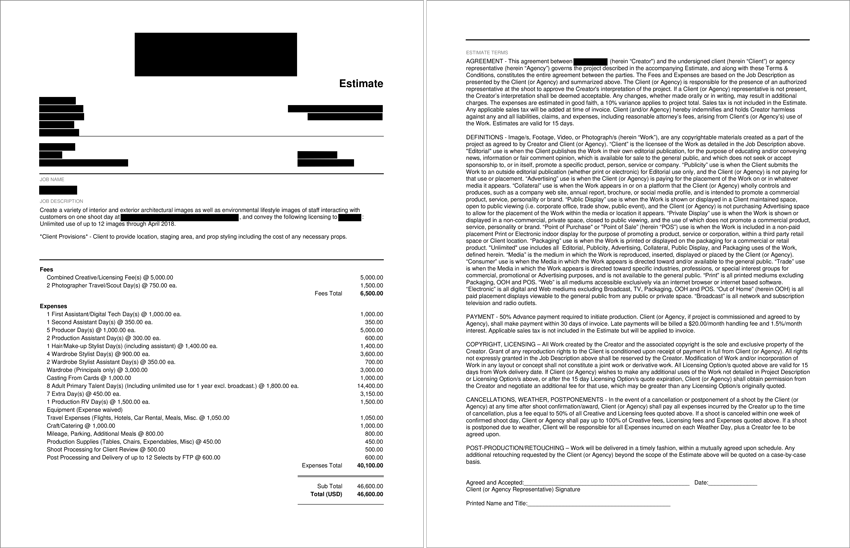 Creative/Licensing: This was the third time in as many years that the client approached the photographer to create images of newly opened retail locations. The first two projects had a similar initial scope in terms of creative requirements and licensing, and a precedent had been set regarding the client’s budget and what the photographer had agreed to regarding creative/licensing fees. In this case, I found out that while the client requested unlimited use of 12 images for one year, their intended use mainly included one image for local advertising use that would likely be minimal, while the other images would end up on the client’s website to showcase the new retail location. I also found out that they had a $40,000 budget they were trying to hit for this particular project.

I’d typically anticipate that for one year of local advertising, an appropriate fee for the first image is in the neighborhood of $3,000. Then I’d apply a discount for the additional images given their likely intended web collateral use, likely pricing the second image at $1,500, images number three to five at $500, and images number six to twelve at $250 each. That totals to $6,250, however, based on the current budget and the previous precedent of the other projects, $5,000 was more appropriate.

Photographer Travel/Scout Days: The photographer would travel in and scout the location the afternoon prior to the shoot day, and then fly back home the day after the shoot. I, therefore, included two travel/scout days.

First Assistant/Digital Tech and Second Assistant: The photographer had a first assistant who could double as his digital tech, and I included $500 for their day with an additional $500 for a small workstation. Additionally, I included a second assistant to help with grip/lighting.

Producer and Production Assistant: I included three prep days (including the time to go scout the location), one shoot day and one wrap day for the producer to line up a crew and coordinate the project from start to finish. Additionally, I included two days for a production assistant; one day to help either the producer or photographer prior to the shoot and one day for the shoot.

Hair/Makeup and Wardrobe Styling: The initial scope of the project called for 15 talent, and the shot list made for a rather ambitious shoot day schedule. Given these factors, I included two hair/makeup stylists, rather than a stylist with an assistant, as we needed an experienced team to help move the styling process along as fast as possible. As for the wardrobe, only the principle talent would need to have clothing sourced for them, while the secondary/extra talent would provide their own wardrobe. I included three prep/shop days and one shoot day for the wardrobe stylist while anticipating that their assistant would be on-site for the shoot, and then handle wardrobe returns after the shoot. I included $3,000 for the wardrobe, anticipating about $375 per principle talent.

Casting and Talent: Rather than doing a live casting, we included $1,000 to cover an additional day for the producer to handle a digital casting process. This included reaching out to multiple local talent agencies, organizing headshots and web galleries of talent for the client to consider, negotiating rates and booking the chosen talent. We included $1,800 for each principle talent, which was appropriate for the usage in this market, and $450 for each extra secondary talent.

Production RV: While the location would offer enough space for all of the crew/talent/client to stay within the building comfortably, I anticipated that the hair/makeup stylists would need a space to prep the talent, and the wardrobe stylists would need an area to spread out the clothing. Also, I anticipated that an RV would be a nice area to get as many cooks out of the kitchen as possible, and if needed, it would serve as a private space with wifi where the client could escape from the production. $1,500 included gas/mileage, travel time, generator run time, dumping fees, and other misc. expenses that RV’s typically charge for.

Equipment: The photographer planned to capture most of the content with available light, and in an effort to keep the bottom line down, we did not include any expense to use the equipment he planned to bring.

Travel Expenses: Round trip tickets to/from the location were about $300, and I included $50 in baggage fees for the outgoing and return trips. Lodging in the area was about $150/night for two nights, and I included $200 for a car rental, a $50/day per diem for the three days the photographer would be traveling.

Mileage, Parking, Additional Meals: This included $200 in mileage for crew members to travel to/from the location. $200 in meals and expenses that the wardrobe stylist and their assistant would incur while shopping for clothing. $150 for miscellaneous expenses and $250 in additional meals for a client/agency pre-production meeting and a client dinner after the shoot.

Shoot Processing for Client Review: This covered the photographer’s time to organize all of the assets and create an initial gallery of images for the client to review.

Post Processing: I included $50/image for basic color correction, file cleanup and delivery of the images. For architectural images, I’d typically include at least $150/image, however, we had already surpassed the client’s budget, and the photographer was willing to give a discount on the post processing.

Results: The client signed the estimate, and the photographer was awarded the assignment. Just as quickly, the client mentioned that they planned to bring in their ad agency to provide further creative direction and help move the project along. While it was surprising, we welcomed the additional clarification. However, we quickly realized that the agency had different expectations for the production that weren’t originally prescribed by the client.

Generally speaking, they wanted a much higher level of production, and the biggest change was that they hoped to shoot throughout the night while the store was closed, rather than shooting throughout the afternoon and into the early evening hours as originally anticipated. The agency also wanted the store to appear as if it were daytime, and have sun coming in through the windows. This meant that we’d need to bring on a grip and a gaffer with a grip truck to rig up large continuous lights outside of the windows, and I added $5,500 to accomplish this ($650 for the gaffer, $450 for the grip and $4,000 in grip/lighting equipment, trucking, generators and misc. expenses). Additionally, this meant that we’d need to feed everyone in a more robust way and ensure the coffee was fresh all night, so we added catering throughout the night.

The agency hoped to see a lot of the wardrobe that was to be procured prior to the shoot, so I added an extra day for our wardrobe stylist to provide pictures of everything and spend a bit of extra time shopping after receiving feedback. Additionally, the agency had insurance requirements that the photographer did not anticipate originally, so we included $1,500 to help increase his policy to meet their standards. Also, as we worked through these updates, the shoot date changed a few times, so we included a bit more in our travel expense line to account for airline change fees. Actually, the ever-changing schedule, increased production level and the re-negotiation of the project across the board meant the producer would be incurring additional time, so we included an extra day and a half for them to handle the workload.

As for the photographer’s fee, while the agency agreed to decrease the number of images licensed from 12 to eight, the shots they removed were mostly variations of similar secondary shots. Overall, I felt the additional shooting time coupled with increased creative requirements was worth an increase to the photographer’s fee, and we added an extra $1,500.

Here was the final estimate for the agency, which was approved: 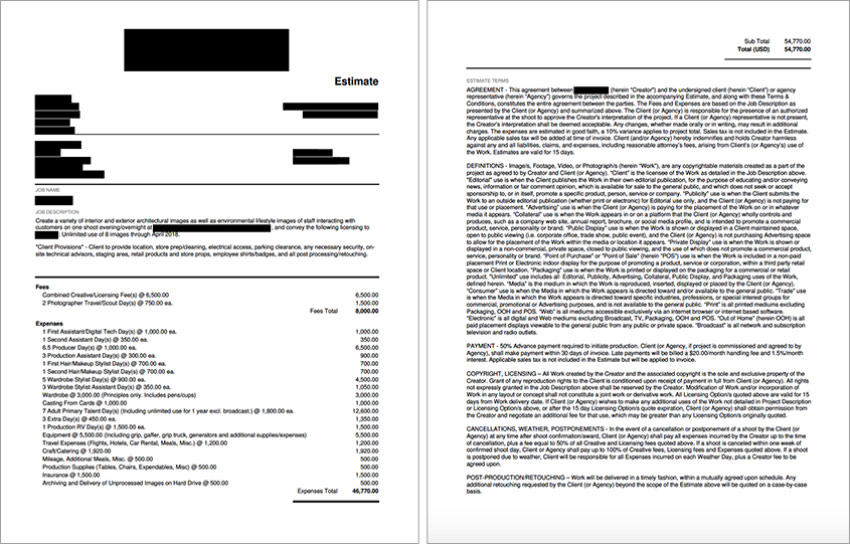 Hindsight: In the end, an estimate that was $15,000 more than the client originally told us they budgeted was approved. The agency let us know that our final estimate was in-line with what they had anticipated for a production like this, and I feel they did a good job explaining to their client why all of these expenses were necessary. It’s highly unusual for a client to approve a project and then have their agency propose different project specs to bid on, but I think this was a result of the project occurring during a time when the client was transitioning from one ad agency to another. Other than the added stress during pre-production, the shoot went off without a hitch, and the images were quickly put to use a few weeks later.