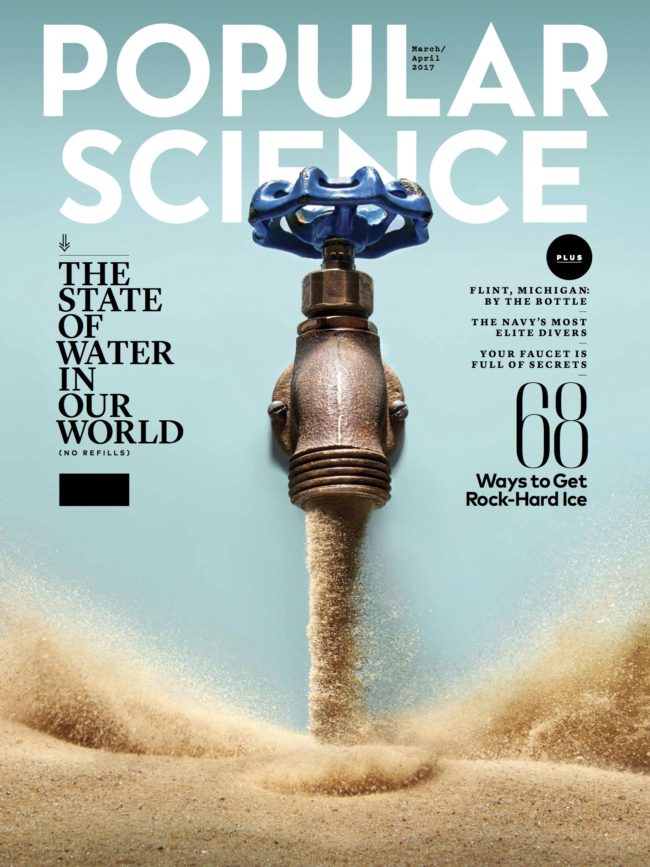 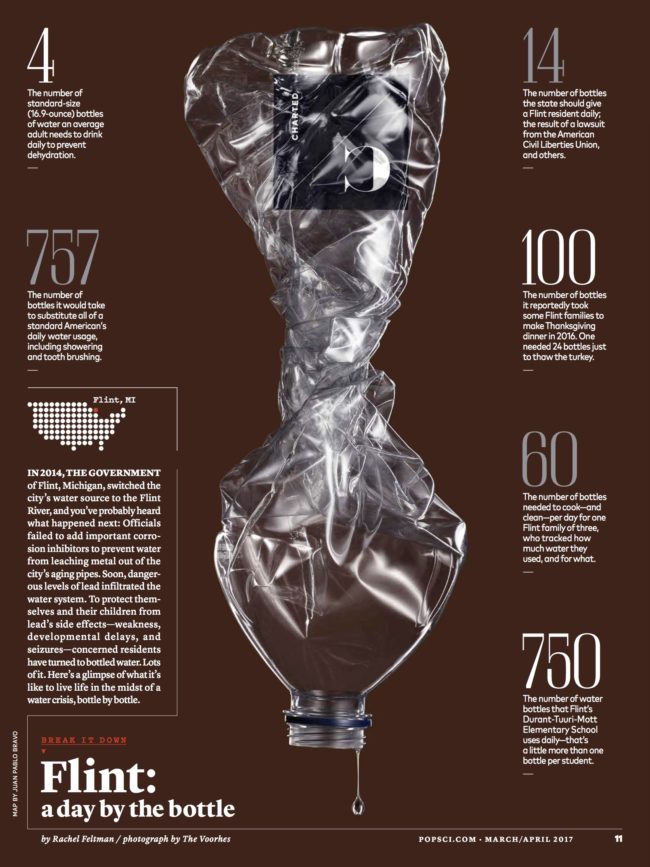 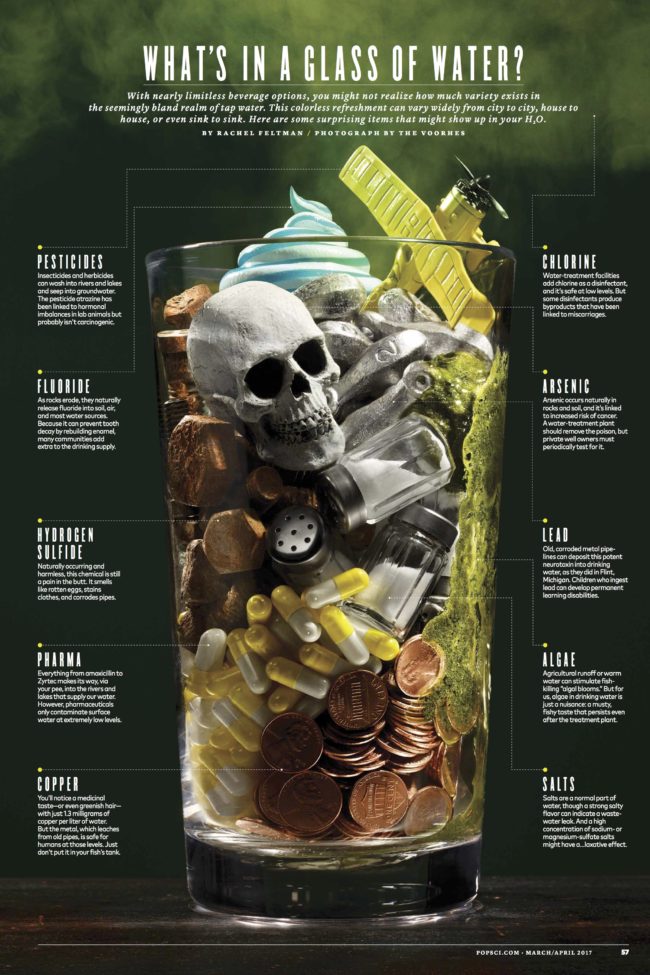 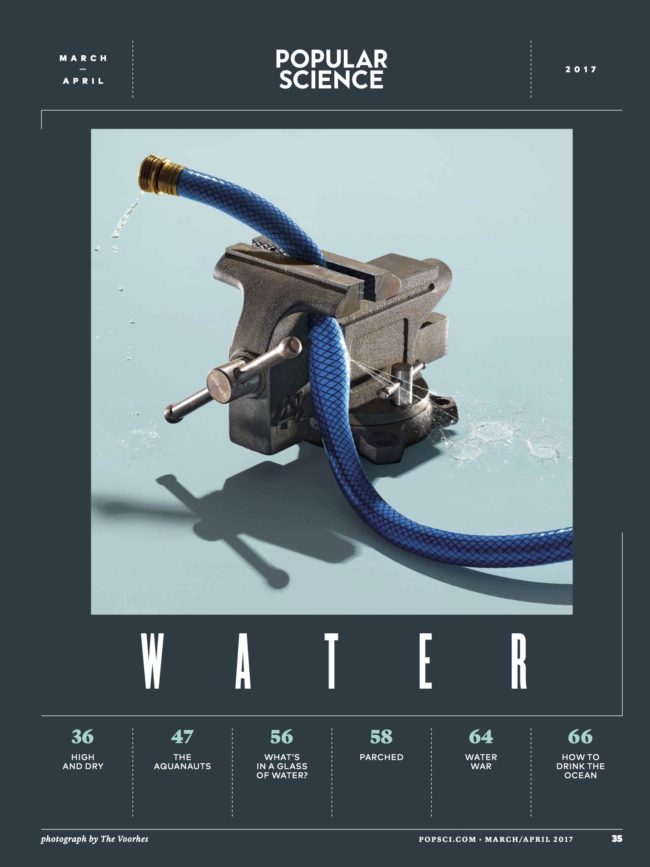 Heidi: When coming up with concepts, what is your process?
The Voorhes: It’s a collaboration the whole way. The magazine sends initial info (like what’s the theme of the issue, what are the features about, any loose initial thoughts. We then sit together (Adam and Robin) and brainstorm/sketch. We bounce ideas off each other, starting with obvious things or maybe not fully formed thoughts, tell them to each other and see how the idea grows. Then we take everything and refine sketches to around a dozen ideas. The magazine then usually take an idea and tweak it to fit the issue better. They send us back a cover mock-up using our sketches and we land on a final direction. Once we have a concept ironed out we fine tune things like color palette, prop direction, light direction, style and overall mood.
Do you journal, draw?
We don’t really think of it as journaling as much as concepting. But there is a LOT of drawing. We usually dedicate an afternoon a week to reading articles and brainstorming (Sunday afternoons on a patio during happy-hour is ideal!). Adam draws thumbnails as we brainstorm rather than taking notes. Robin too but her scribbles are not as legible so notes are required. Some ideas are half formed and some are really solid. We go round and round until we have a handful of solid ideas for each image a magazine needs. Then, later, at home at the kitchen table or at the studio over a cup of coffee we make refined sketches to send in to the magazine. Sometimes our sketches are nice, and sometimes they are pretty rough. Our goal is to simple get as many strong ideas out as we can. 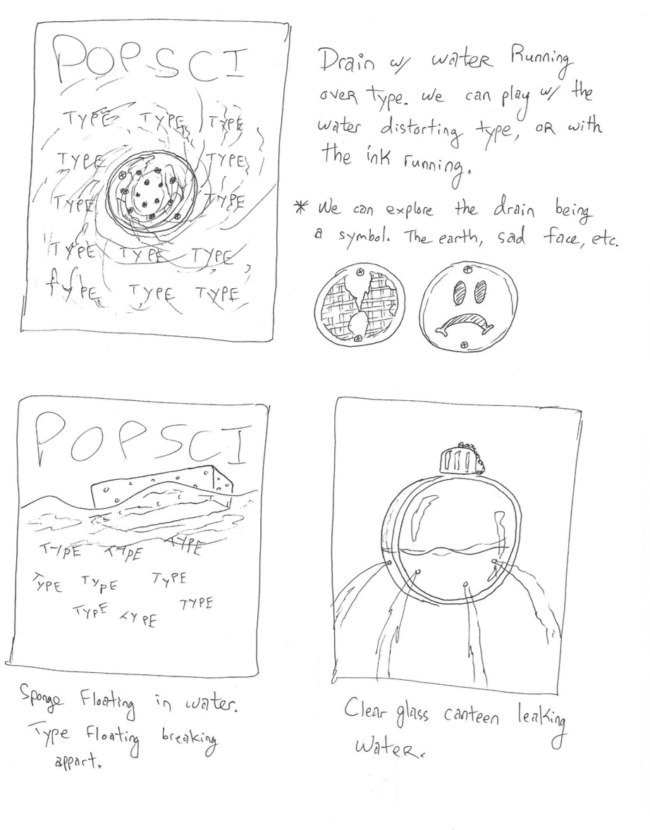 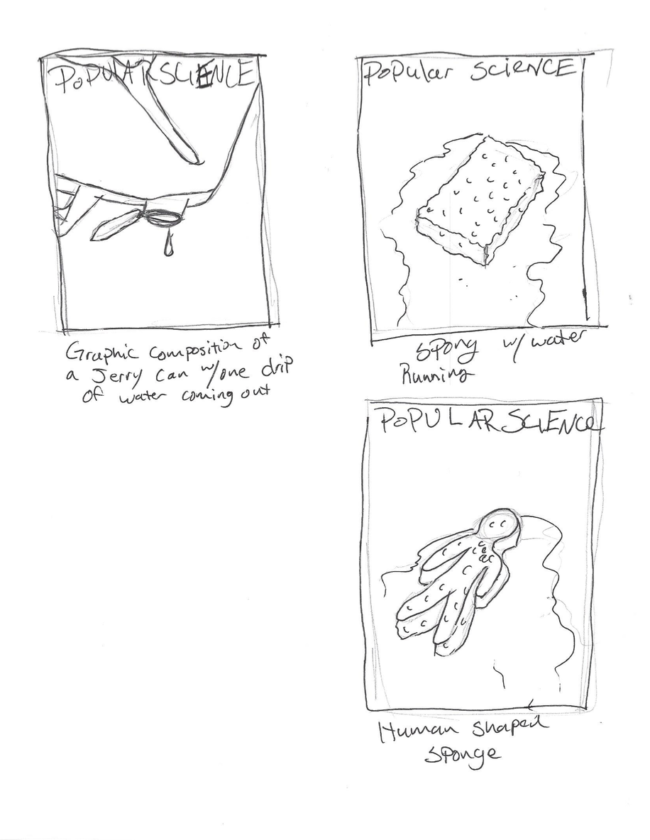 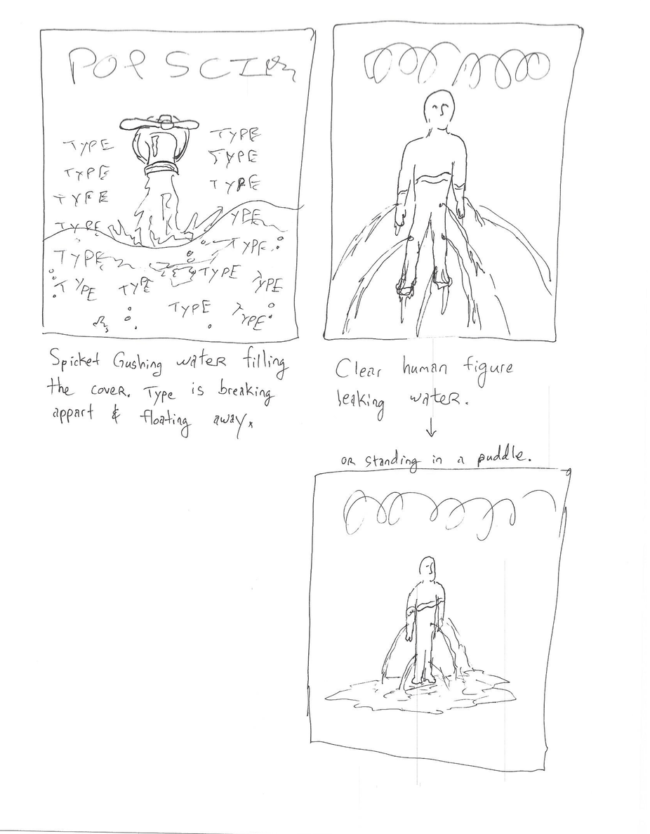 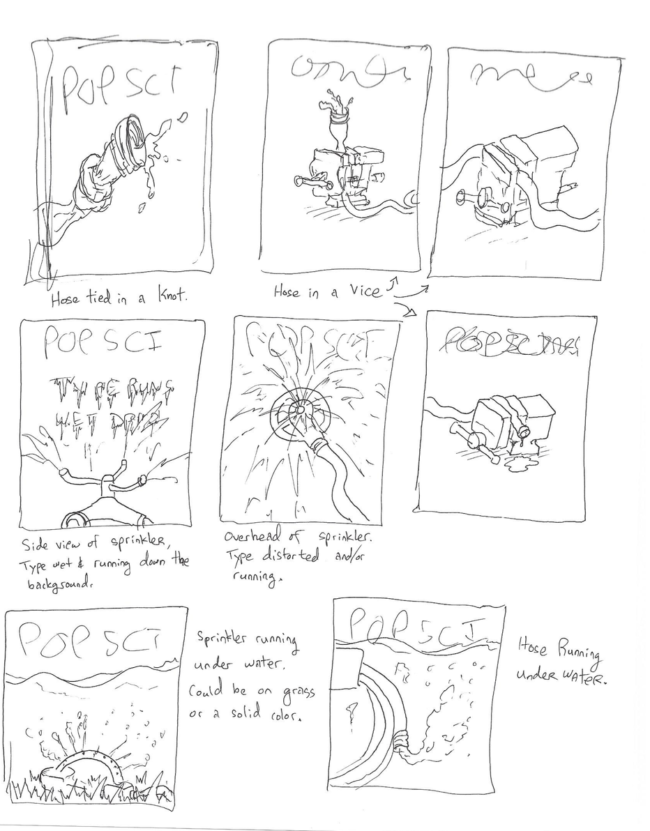 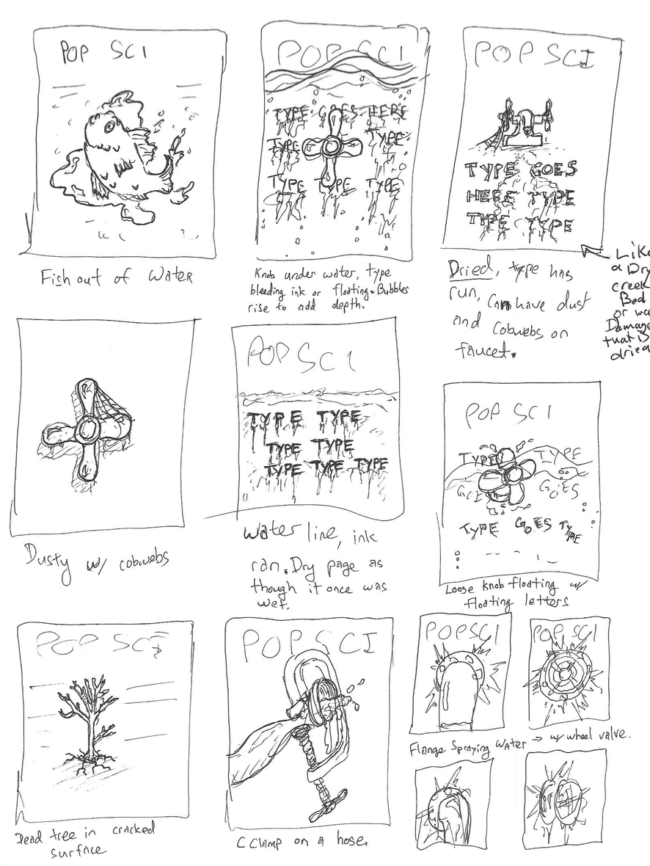 How did this idea develop?
Avoidance I think. The whole issue is about water, the future of water, and in great part water scarcity. So the obvious is to do a play off of a glass of water, right? But we were given specific direction to NOT photograph any play on a of a glass of water. Adam couldn’t help but to doodle a glass of sand. The simplicity of it and the quick read was a draw. We also had sketched a faucet with fatter willing the bottom part of the page, and type was starting to break loose and float. We presented a bunch of ideas to the magazine, some well formed and some loose bits of ideas. They came back with the thought of sand replacing water in the faucet sketch. It was a totally collaboration. A mash up of brains and ideas.
What type of direction did you get from the magazine?
No glasses of water! ;-) Also there were ideas of water interacting with type in various ways. Our main direction was to create a simple graphic image that can be bold on the cover and work well with design. Beyond that it is a general nod to all of the features in the article. Something the wraps it all up into one general idea.During the shoot lighting direction came into play. Adam tends to light things in his head, then sets up exactly what he imagined. This, although a very convenient skill, can result in a lack of exploration. So, once things are lit and dialed in, Robin will ask Adam to light the scene a different way. Then after that she asks him if we can look at it any other ways. Often times the third variation is something new. It is one way we try to elevate out work.So this time we made options of pooling light from above, then we made a graphic option with crisp shadows. Same image, totally different vibe. We shared the light directions with Thomas at Pop Sci. He was digging the symmetry and cleanliness of the pooling light, so off we went!

How many ideas did you have before arriving at this one?
Oh man, maybe 30 on our end? Not that they were all GOOD ideas. And the magazine had a bunch to. It’s a journey sometimes.

How did you decide what was the right amount of sand to make things proportional?
The amount was decided on set with what looked right. The sand had to be completely dry to not clump together. We spread out and dried a couple big bags of sand from the hardware store then sifted it till we had around 40 pounds of really fine sifted sand. As we started putting together the set we realized we had WAY more sand than we needed. The sand was overpowering the faucet, so we came in closer, reduced the sand surface, and ended up maybe using 10 lbs of sand total. Then we had to take design and type into account, so there were some tweaks. For example the distance from the faucet to the sand surface was increased to accommodate type.
Were there any obstacles to getting the water shot? ( what’s in your water )
We shot this in January after a freeze. There was no alga floating on the lakes. Our assistant figured out how to make something that looked like alga using egg whites and matcha tea. It looked good for about an hour then started to get gross and dark. Other than that scale was an issue. Finding the right items that related to each other size wise and could all be styled into a vessel together so we would not have to make a Photoshop composite was tricky. Thank god for mini salt shakers and aquarium decor skulls.
What was the biggest challenge with this cover and feature assignment?
The details. Nothing was an overly complicated prop fabrication. But the details of each object mattered. Getting the right flash duration on the sand to have just enough drag to feel in motion but not blurred. Having light that is beautiful and just a touch dramatic. Pulling focus in a macro scene with moving subjects. It’s just attention to detail and a constant effort to make better work.
Where did you get the faucet?
We bought a variety of new faucets from the hardware store and tried various aging methods on them. While they looked fine, they were not quiet right. We needed something with character to be worthy of a cover. One of our assistant, who we keep asking to go get a tetanus shot, went to a metal recycling yard and spend an afternoon digging through rust piles till she found 5 different vintage faucets with PLENTY of character. The final faucet was with the knob from one and the spout from another. She still has yet to get the tetanus shot despite us telling her to go.