Licensing: Use of up to 15 images in a custom publication as well as perpetual collateral use.

Location: A retail store and manufacturing facility in East Asia

Agency: Large, based in the Northeast 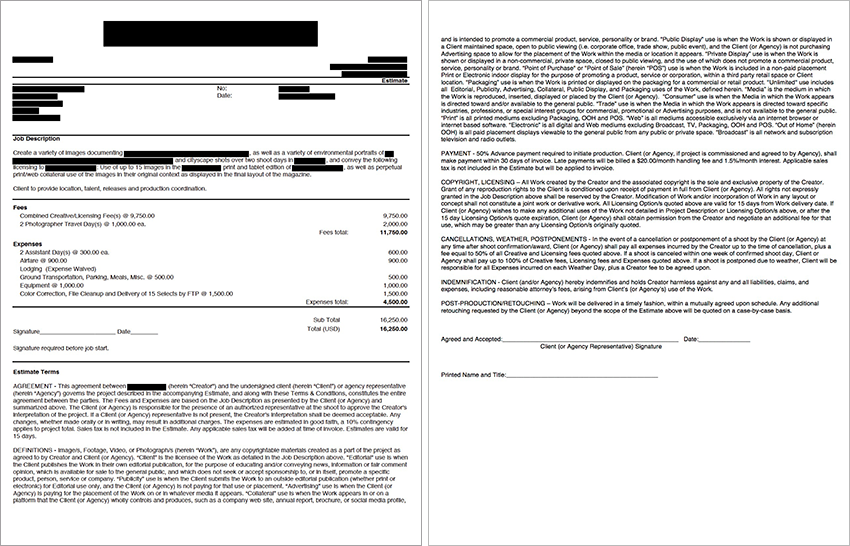 Creative/Licensing: The agency/client hoped to document the manufacturing process of a product associated with their brand, as well as a few portraits of the fabricators and cityscapes in and around the area where the facility was located. One day would focus on capturing images within the facility and portraits of the employees, and the other day would be dedicated to capturing still life images of the products, as well as photojournalistic images of the area around the facility. The primary use of the images would be for a custom publication with a circulation of up to 500,000. In addition to the custom publication (which would also have a digital version available online), they also anticipated using the images in direct mail pieces and emailers while using them on their website and social media outlets. These other collateral uses would feature the images within their final layout to promote the publication, rather than being used independently and out of context. Additionally, while the use within the publication would be limited to a single edition, the collateral use would be perpetual.

Based on previous experience with similar projects for custom publications and the information I was able to acquire from the agency, I came up with a tiered pricing structure. I determined the first image was worth $2,500, images #2-5 were worth $1,000, images #6-10 were worth $500 and images #11-15 were worth $100, which landed me at $9,750. Prorated, that broke down to $650/image and just under $5,000/day if the client were to look at it that way, which I was comfortable with.

Photographer Travel Day(s): The photographer actually split her time between New York City and the location in East Asia. This was one of the reasons the agency was interested in working with her, as she was fluent in the language and already familiar with the area. While she could have worked as a local if it really came to it, we wanted to include a fee to account for the time it would take to get there and back before and after the shoot. Given the location and flight durations, it would actually take two days to get there and one to get back, however we wanted to keep the travel expenses palatable to the client so we left it at two days total.

Airfare and Lodging: While the photographer wouldn’t need a hotel since she had local connections, the airfare was around $700 for the dates the client had in mind, and we added about $100 each way for oversized baggage. I’d typically include business class fares for flights like this which would have been pricier, but as I mentioned, I wanted to keep the travel expenses to a minimum so we estimated for economy seats.

Ground Transportation, Parking, Meals, Misc.: I included $60/day for the photographer’s meals over four days, and added an extra $30/day for her assistant’s meals over the two shoot days. On top of that, we included $200 for taxis and miscellaneous expenses.

Equipment: I included $500/day for two shoot days to account for the minimal grip/lighting that the photographer would be bringing with her each day. Again, to keep apparent travel related expenses to a minimum, we included equipment expenses as if she was working as a local, rather than charging for the rentals over the entire course of the trip.

Color Correction, File Cleanup and Delivery: I included $100/image for basic processing and delivery of 15 selects. I’d typically charge a few hundred dollars to do an initial edit and provide a web gallery to the client, but I felt we were already pushing the limit on what their budget might be, so we left it out.

Feedback: A few days later, we heard back from the agency, and we found out that their budget was $15,000 (we weren’t far off). However, based on availability of the facility and subjects, they hoped to stretch the project and add another shoot day while also adding on five more images. After a conversation with the client, they knew they wouldn’t be able to keep the $15k budget while adding this, and were willing to increase the budget to make it work.

I looked at this a few different ways in order to determine an appropriate price increase. First, I considered the tiered pricing structure, figuring that these five additional images would probably be worth the same amount as the bottom end of the range I calculated, perhaps as low as $100 each. If I went this route, I wanted to make sure we accounted for the photographer’s time, which would be more valuable than the additional licensing in this scenario. Ideally, I would have added $2,500-$3,000 to account for the additional day on top of the $500 licensing fee. The other way I could have approached this would have been to prorate the cost based on the original fee and number of images, and multiplied that times five more images. Both of those approaches brought the total creative/licensing fee to around the $13,000 mark.

We also adjusted the expenses to account for the additional day, which quickly pushed the bottom line up over $20k, and I felt it was worth another phone call to the agency just to double check how far they thought we might be able to increase the budget. I found out that they anticipated their client would be willing to go up to a max of $19,500, and asked to see what we could do to make that happen.

With that budget in mind, we made a few concessions while keeping an eye on the photographer’s true out of pocket expenses. We brought the travel days down to $750/day, added just $200 for equipment, and cut the processing to what broke down to $60/image. We also increased the assistant by a day and increased the transportation and meals by $200 as well. This brought us $100 under their budget, and we sent it off to the agency. Here is the estimate:

Results: The client opted to move forward with the three-day version, and the photographer was awarded the project.

The Art of the Personal Project: Wilson Hennessy