Henceforth, I’ll be the guy that announced his wife’s pregnancy in a book review. There’s no way around it. That’s me now. I’m that guy.

And what of it? It means I’ve decided to share details about my life with you, our readership. Why would I do such a thing? Is it to ensure that these articles are interesting enough to hold your attention? Sure.

So now you know that I’m going to have a daughter at the end of Summer. I already have a son, and a brother, who also has two sons. What do I now about raising a girl? Not much.

On the plus side, as an artist, I get to discuss my feelings. Heck, I get to be aware that I have feelings, which is more than I can say for many an American male. But yes, I have plenty of feminine characteristics to balance out the testosterone. Just last night, I had a chat about emotions with my Mom. Sure, I made her cry, but it was the good kind.

But as to rearing a little baby girl from scratch? I haven’t got a clue. I was weaned on sports, smacking my brother around, and slogging through the stream in the backyard. I’ve never played with dolls, (action figures are different,) and like many a man, have long harbored deep fears about what it will be like when my daughter’s first boyfriend (or girlfriend) shows up at the door with a smirk on his/her face. It’s a common fear, and one I’m looking forward to meeting head on.

But really, what am I in for? Where should I turn for a glimpse of what the future holds? How about a photo-book? (Yes, I’m sure you saw that coming this time.) In particular, let’s take a look at “Sasha,” by Claudine Doury, recently released by Le Caillou Bleu. (With an essay by my good friend Melanie McWhorter.)

I think someone made a comment about “Haiiro,” something about judging a book by its cover. Well, you can do that here as well. On a beautiful block of green fabric sits a black silhouette of a bird. Smallish, it might be a finch, or something like that. (Lacking details, as it’s black, we can’t tell.) But it sure is pretty. Open up and the inside of the cover is mauve, which is like a cross between pink and lavender. Again, pretty. (And it goes so well with the green.)

Flipping towards the photographs, which ought to be more important, we see a succession of images featuring a girl, whom we can only presume to be Sasha. She’s a late adolescent, maybe 12 or 13, if I had to guess, and is joined by a friend or two in many of the images. And what do they do? Play dead, imagine things, frolic in the mud, cavort covered with weeds, conjure spells cast with burning witch-ly sticks. In short, they live in imaginary worlds, no different from boys, in theory.

I suppose it’s a feminine version of what I did with my buddies back in the day, and what my son does now. In pre-school, we fought over who got to be Superman, and co-ordinated our Underroos. By Kindergarten, the teacher made us take turns pretending to be Luke Skywalker. On the playground, it was an endless blur of kickball games that always seemed to end in tears. (Yes, mine. I was a sensitive lad.)

No, really, back to the book. The photographs are well made, with a somber earth tone palette, and a healthy dash of mystery. Like when Sasha walks on water. (Thank you, Photoshop.) When the girls are running in mud, they made me think Ana Mendieta and her Earth art. Buried under the tall green grass up to her neck, eyes averted, Sasha plays dead. She’s always up to something, whether staring at leeches, presenting a blonde pony tail in a box, petting the bird from the cover, or pretending to suffocate while covered in a plastic sheet.

Is this my future? I don’t know. None of us do. But as I always say, I like to be surprised by a good photo-book, to learn new things, to witness fresh perspectives. “Sasha” did this for me; helped me visualize the unknown, which is the scariest thing of all. Will it do the same for you? 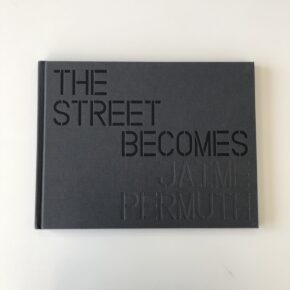