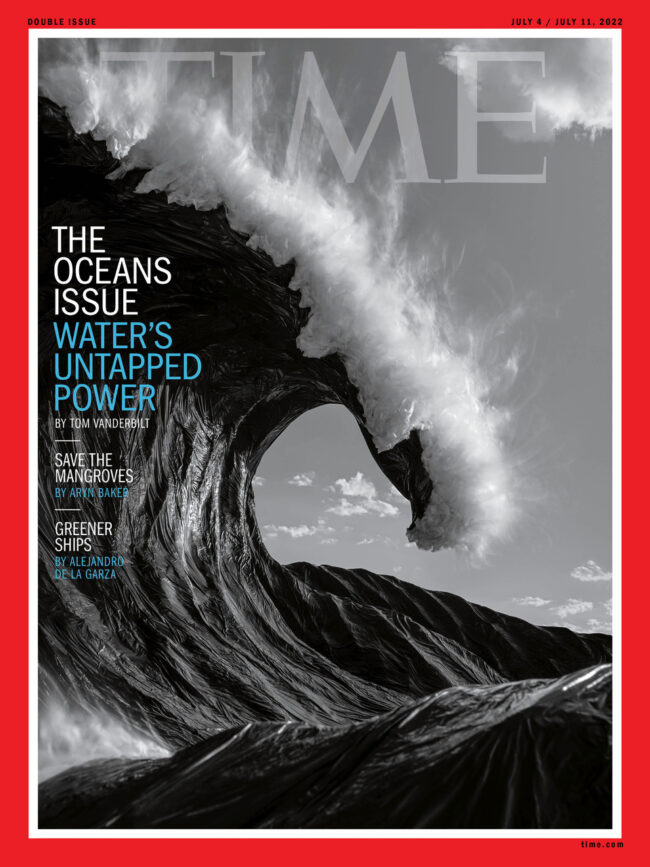 Heidi: How did the idea for Plastic Waves come about?
Hugh: I had been working on a personal environmental project around water using recycled, repurposed, or rejected plastic sculpted into water effects. I would take the sculptures to specific locations and photograph them in the right light.After about a year, I saw a Robert Longo charcoal drawing at a gallery here in LA, and that was when the idea for Plastic “Waves” hit me. The artwork was from his Epic Wave series, and his masterful rendering of texture made me think of plastic garbage bags. Although a completely different interpretation, this one image out of the series is closest to one of Longo’s waves. It’s the one I saw in the gallery that day. Since then, I’ve shifted away from that first project, titled Mirage, and solely working on the Plastic “Waves” series. 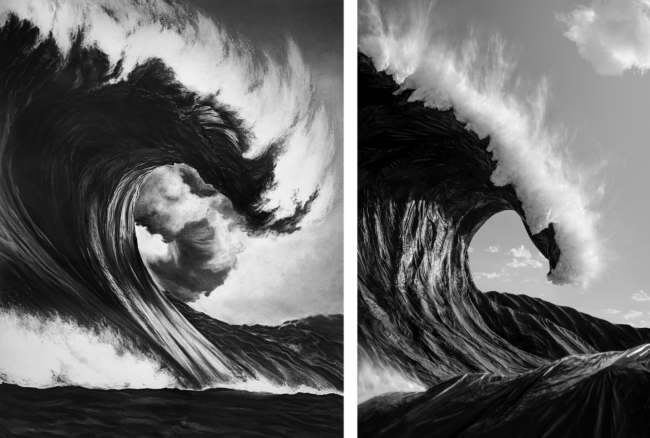 Where did you photograph the sculpture? ( it looks like the wave is built in two pieces)
It was during the early days of the pandemic when every public outdoor space was off-limits, and the beach where I photographed the first one was on that list. So, I had to hike the sculpture and gear up to a fire road near where I live in the Santa Monica Mountains. It’s a remote trail that was closed, but I set up behind a bend at the foot of the trailhead, out of view. Yes, this sculpture was designed in two parts. I wanted to force depth in the image and frame the smaller section in the foreground and close to the lens. It gives the perspective that feels as if you’re swimming in the ocean, watching the wave go by. 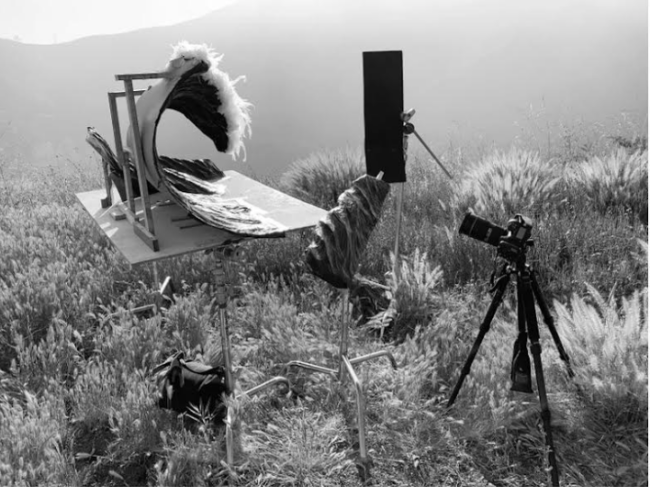 What did you use for the waves and the wave’s foam and spray?
The process starts with chipboard as the base that defines the overall shape. Then repurposed pillow batting is applied to the surface, giving the sculpture visual volume. On top of that, I lay an aluminum screen over the entire area that is visible to the camera. The screen provides tooth for the next application, paper pulp made from old newspapers combined with a binder. Once it dries, I laminate black plastic garbage bags to the surface using a spray mount and a hairdryer.

The last step is the most time-consuming: recreating the foam and spray. It’s critical because that is where the eye goes first; the details must be as realistic as possible. That area is made from a translucent garbage bag of different thicknesses, each serving a particular purpose. The foam is loosely crumpled from a thicker plastic to hold its shape, while the spray is made from a thinner version. The spray is where most of my time is spent. I make hundreds of little pompoms that I hot glue to the surface and add hundreds of longer ones that I speckle throughout. During capture, I use a neutral density filter, small aperture, long shutter speed, and an electric leaf blower that gives off the illusion of motion to the spray.

How much testing did you do with the plastic bags?
I didn’t test the plastic bags so much as learn how to turn a 2D artwork into a 3D sculpture. The first wave I attempted resulted in four iterations before I could get it right. That means starting over from scratch each time. I’ve gotten a lot better at controlling the issues by altering the techniques I use and having a complete understanding of what types of bags work best for each area of the sculpture I’m working on. Ultimately, it is all about the light and reflection and how it interacts with the particular garbage bags. I’ve been at this for a while and now design the waves in a specific way depending on the light at any given point in the year. The wave’s design has to be oriented to the right for summer projects, while the winter months require it to face the opposite direction. 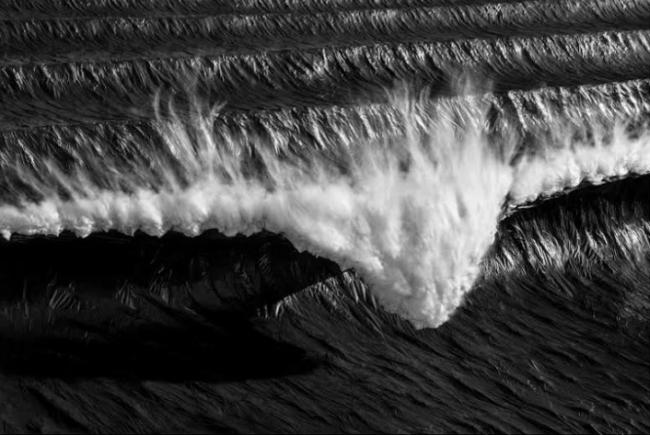 What was most challenging about the build for the cover image and the wave image?
Creative Director DW Pines selected a photo from 2020, and I didn’t explicitly create it for the cover. He had already designed the cover with my image and sent it to me with his initial inquiry. But he asked about creating a shot in the week we had, but I told him they can take weeks, sometimes months, to make, and there wasn’t enough time. And time is the most challenging aspect of this work. The process has a mind of its own and is unpredictable, and is due to the materials I use not bending the way I want. However, I’ve changed the techniques to work around those issues. The capture phase of the project is also a challenge because I usually end up photographing the sculpture four or five times before I feel it’s right. Until the sculpture is ready to be photographed, I haven’t seen the sculpture in the intended lighting, and that’s when all the flaws and issues appear. So, I’ll bring it back to the shop, make the necessary changes, take it back to the beach and try again. 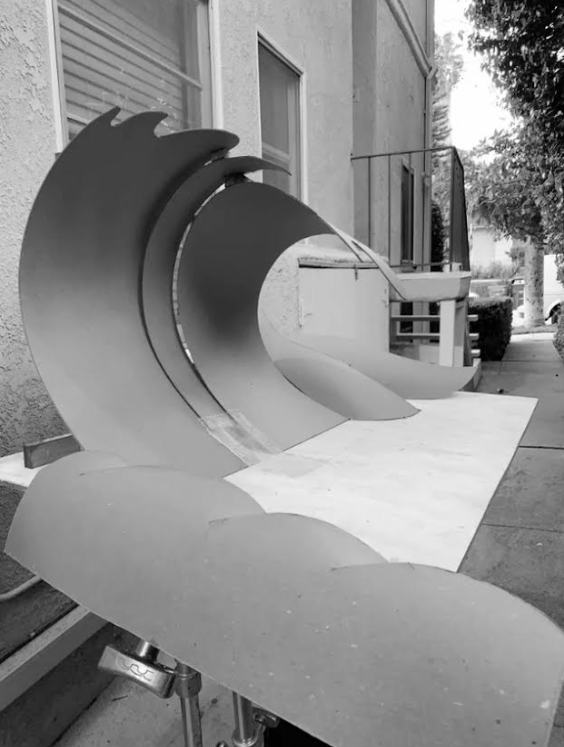 What was your intent for these images?
One point I’d like to share is my intent for these projects. Plastic “Waves” and Mirage were both started because I wanted my work to have a purpose, and environmental causes are what these projects’ primary objective is geared towards. I want to benefit nonprofits devoted to water conservation through gallery print and book sales. This syndication is my first opportunity to do so, and I’m very proud to be writing that first check.

The Art of the Personal Project: Claudine Williams