This Week in Photography: Say What?

To keep this weekly column going, for 10.5 years, I have a few tricks up my sleeve.

If I were an actor, the “self” I share would be considered a character, like when Jerry Seinfeld played a “version” of Jerry Seinfeld on his hit 90’s television show, “Seinfeld.”

But I’m not an actor.

So people assume the “me” I’m sharing is authentic, whole, and thoroughly considered.

Really, it’s two out of three, as I present a slightly more daring, absurd, and risky side of myself here, for entertainment purposes.

Why am I telling you today?

Last week, I wrote a passionate long-read, taking down all of San Francisco as “uncool,” due to decades of unabated gentrification, rabid capitalism, raging income inequality, and failed public policy.

I held nothing back, and was heavily motivated by the heavenly metaphors embedded in the human shit I kept finding at my feet.

(Not subtle, those metaphor gods, when I was in San Francisco.)

But the “aging hipster calls whole city uncool, as way of reifying his own cool status” narrative…

So when I got called out on Twitter by my buddy Matjaz Tancic, who last I checked was in a LITERAL FUCKING LOCKDOWN in Shanghai, I heard what he said.

There is more to every story, and unless you’re running around late at night, seeing what the parties look like, listening to the bands, checking out the underground galleries, it’s not exactly fair to judge. 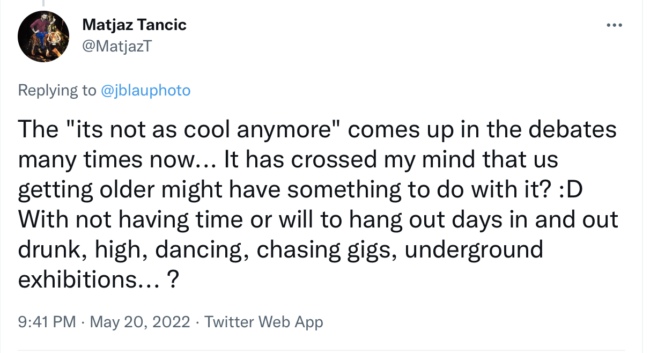 I hear you, Matjaz!

So I admitted my “take” was a little reductive.

But I’m claiming the columnist’s privilege:

Sometimes, we see a particular narrative form in our heads, think it over for a bit, and then write it up as it happened, because it makes for such a great story.

Matjaz was not alone in his critique, though.

Over the many years of this column, one person has kept reading all along, while consistently sticking his neck out to share opinions in the comment section.

(It’s like having a super-fan, but one who cares enough about books, ideas, and photography that he’s willing to add his perspective, making the article better for the extra chunks of wisdom at the end.)

This person is Stan Banos, based in San Francisco, and I’ve certainly given him random shout outs over the years.

In my opinion, Stan is always intelligent, considered, historical, and contextual in his commenting.

I don’t know if I’ve ever disagreed with anything he’s written, in all my years.

His karma is good by me.

So when Stan commented that I need to get out of my SF bubble, even in jest, I felt it was worth hearing.

Imagine my surprise, then, when I went to the book stack this morning.

I found a package from May 2021, and it seemed the one for today.

But just below it was a Blurb book, which must have come in around the same time.

Certainly, it had been here so long I didn’t know what it was, and the post-mark was beyond-smudged.

There was no way to know exactly how old the book was, but it felt right.

So I opened the Blurb book box, (with the smudged postmark,) and would you believe what I found?

A beautiful, little production named “SAY WHAT?” by none other than Stan Banos himself.

I treated his work with the same critical eye I would anyone else’s, but it made me think of a theory I just shared with a client the other day.

From start to finish.

So as artists, we need to plan every aspect of that viewing experience.

How long does it take to get through?

Where does it lag?

How can we keep the viewer’s attention locked in our story, whatever it may be?

This book, “SAY WHAT?”, totally nailed that for me.

The cover and page 1 show us images of graffiti in an urban environment, and sure enough, that’s the theme.

Page 2 has a concise, direct statement from the artist, (Stan,) theorizing there are declarations of need, cries for help, hidden messages, and occasional wit encoded on the streets and super-structures, if only one would take the time to look.

Again and again, we see images of messages; things I would have walked past.

Things so many of us HAVE walked past.

Collecting these photos in one sequence, as a book, is a home run for me.

At one point, we see an image of some sort of screed, or manifesto up on a wall, by Zoe Leonard, and after I squinted to read it, realized it was printed right there for me, below.

Page after page, I took time to read each piece of graffiti, and then imagined the photographer, walking slowly around his neglected city.

It made me think about how quickly I rushed up and down the hills.

How quickly I rushed to judgement.

Because this book is cool, and Stan’s cool.

So there must be other great things still going on in San Francisco. 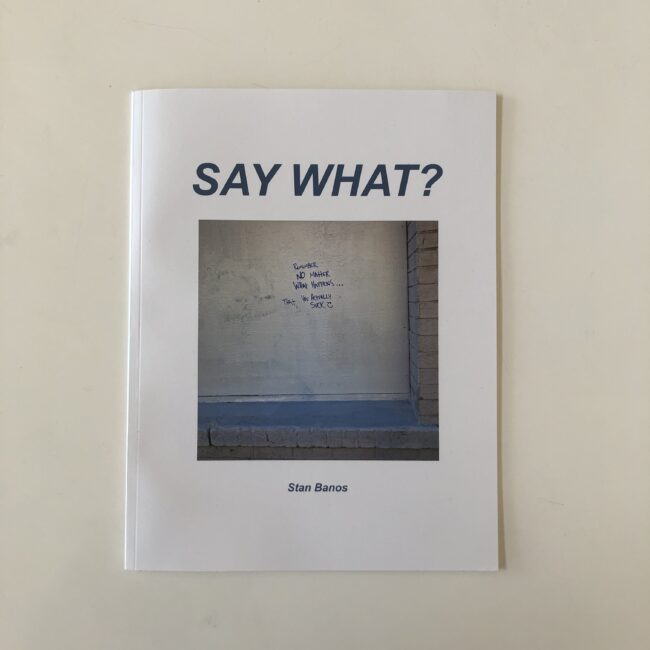 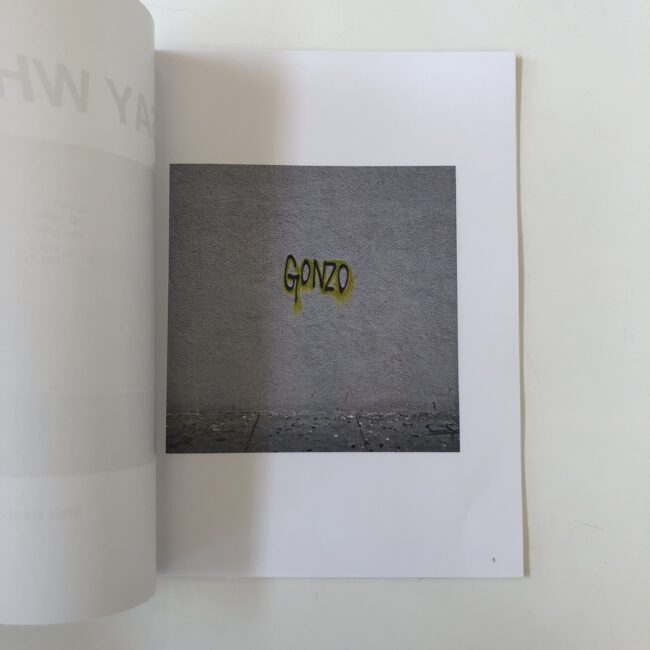 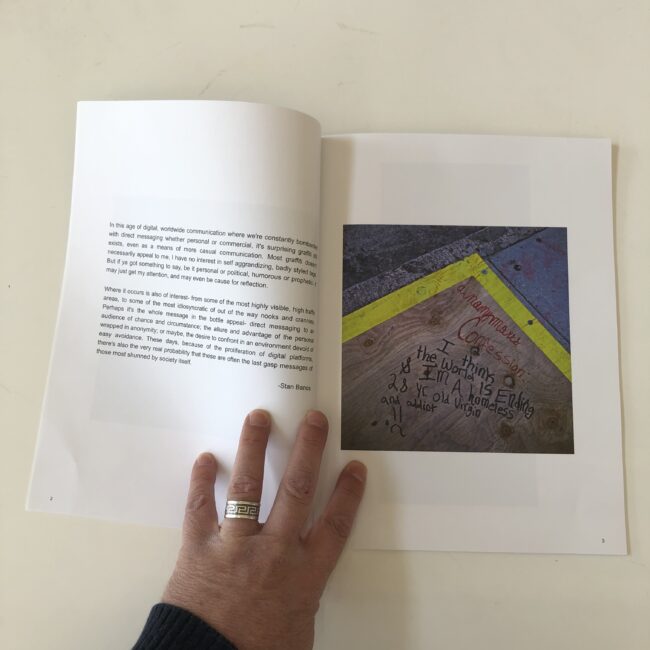 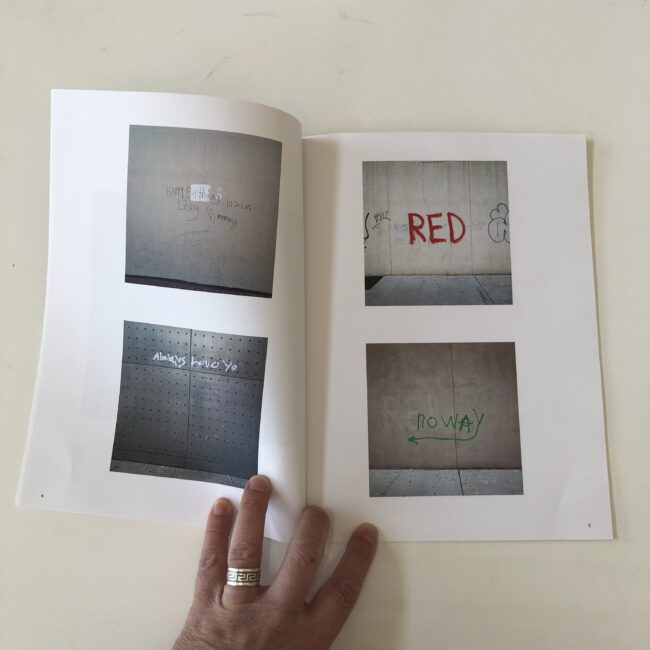 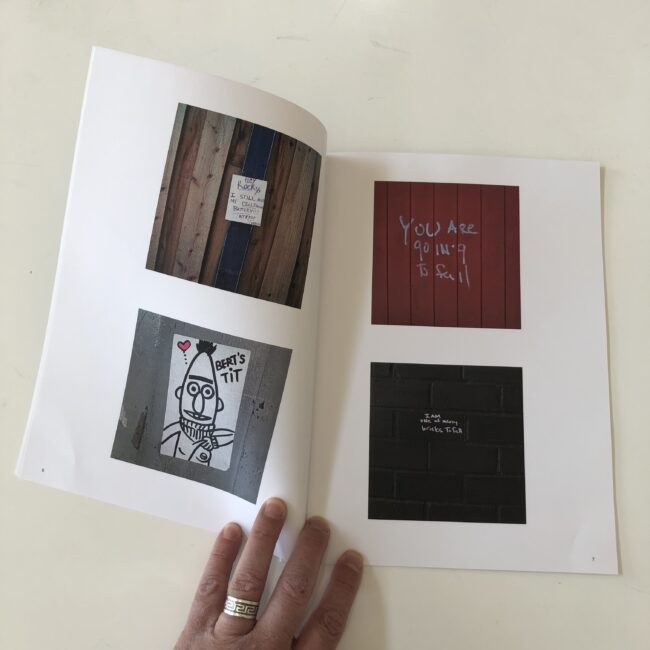 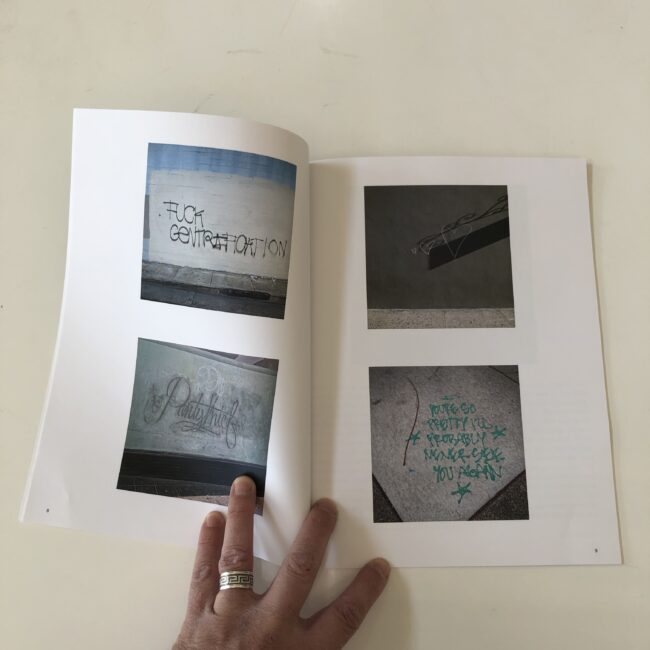 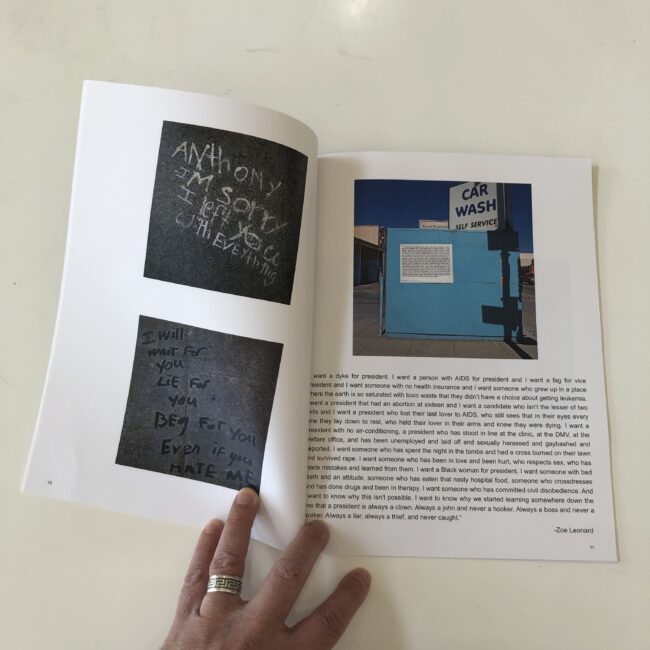 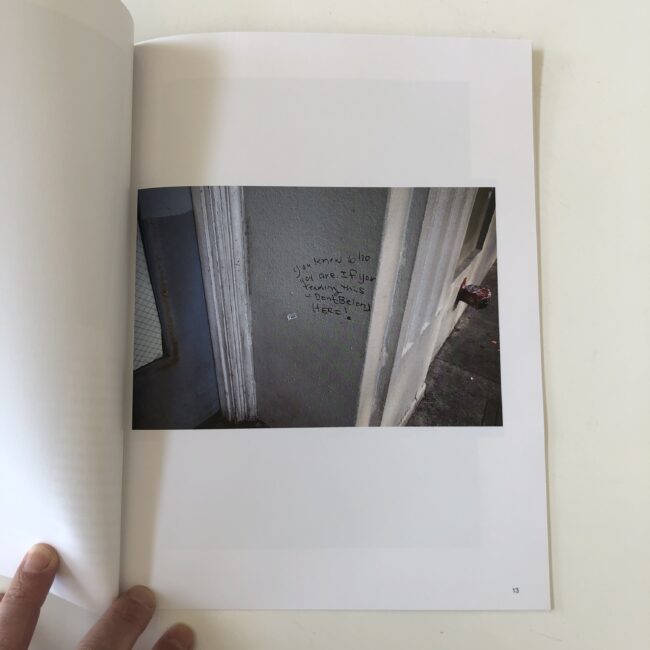 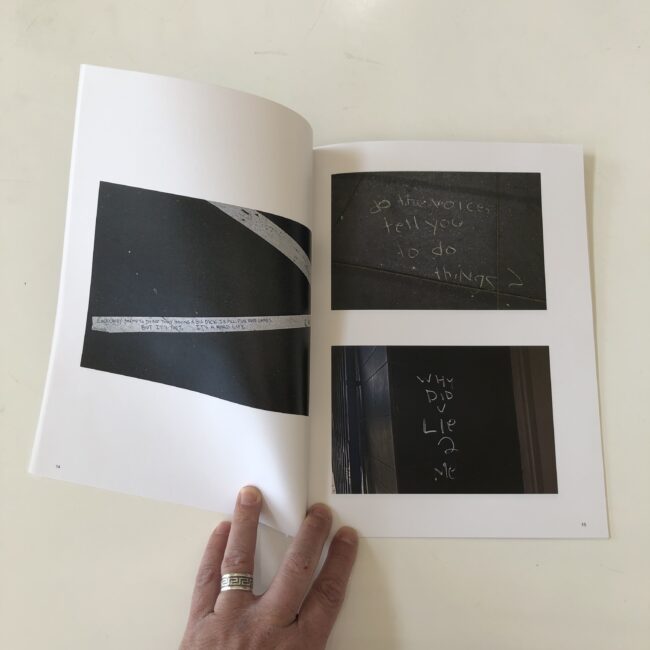 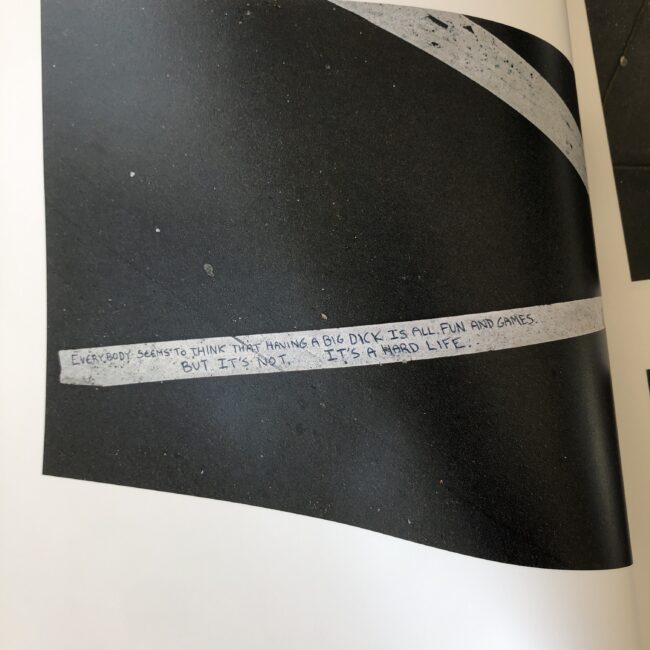 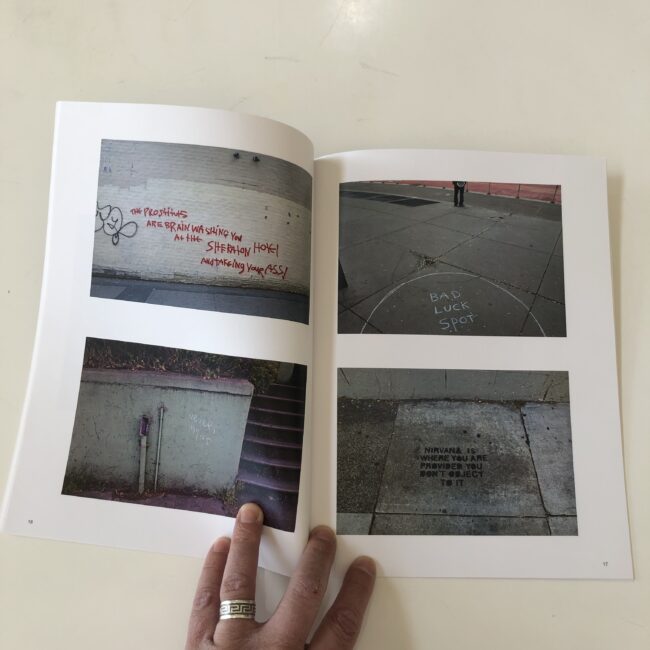 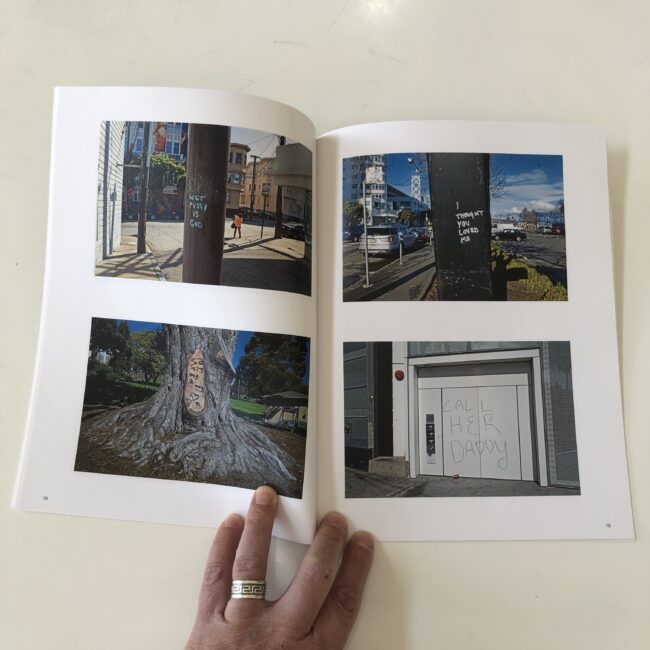 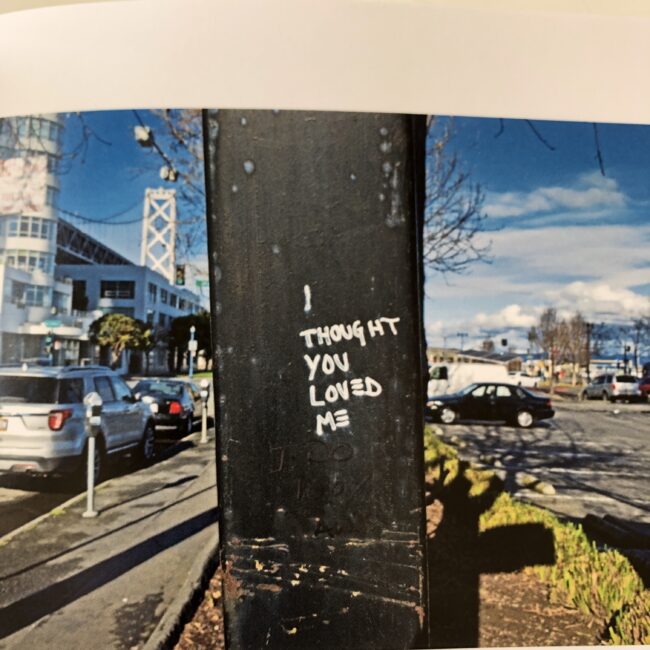 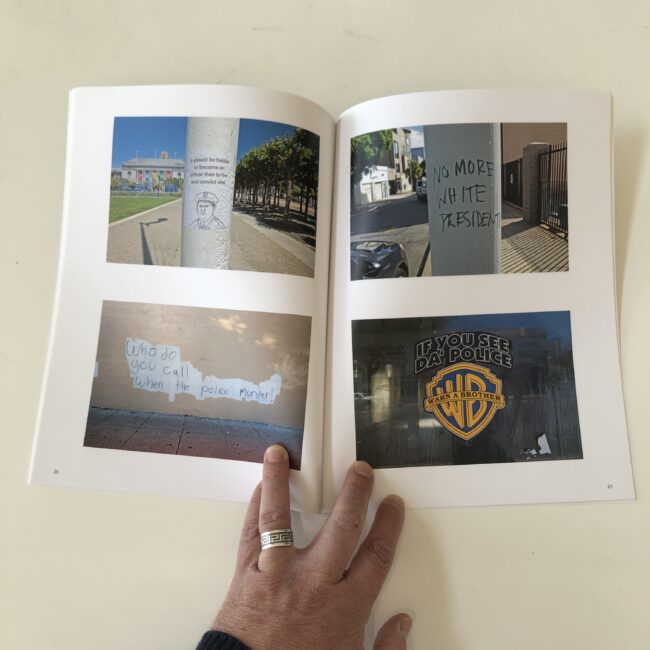 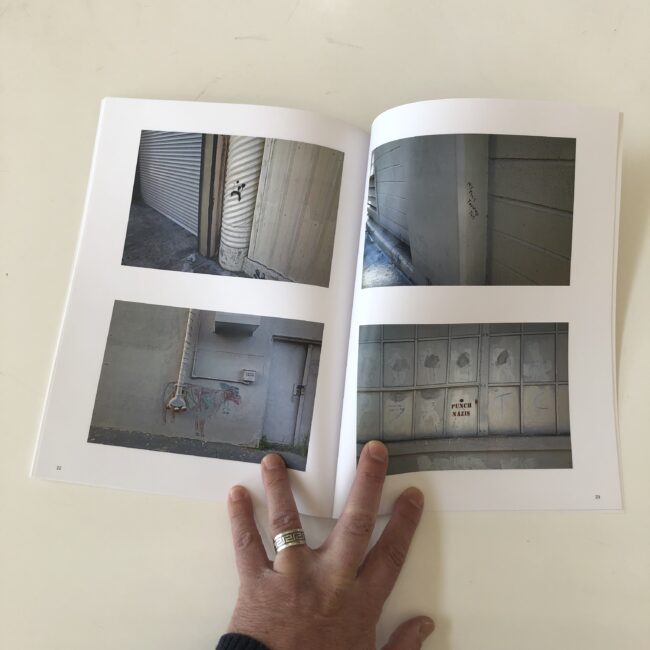 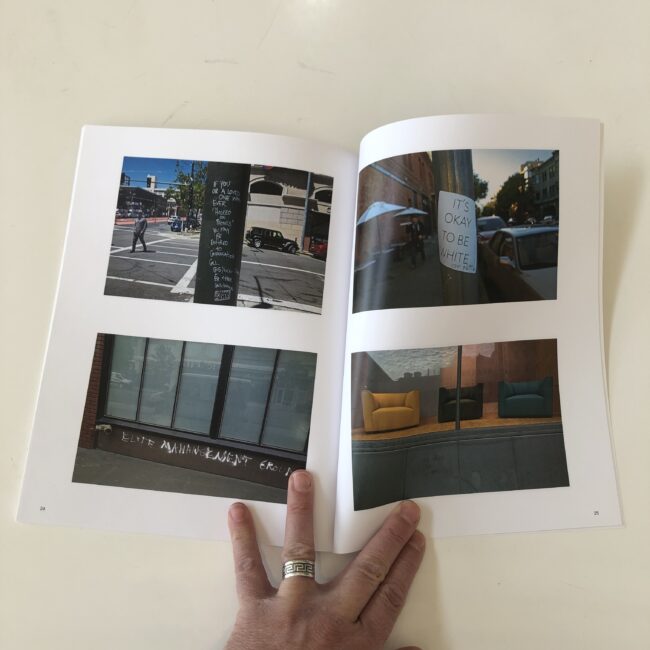 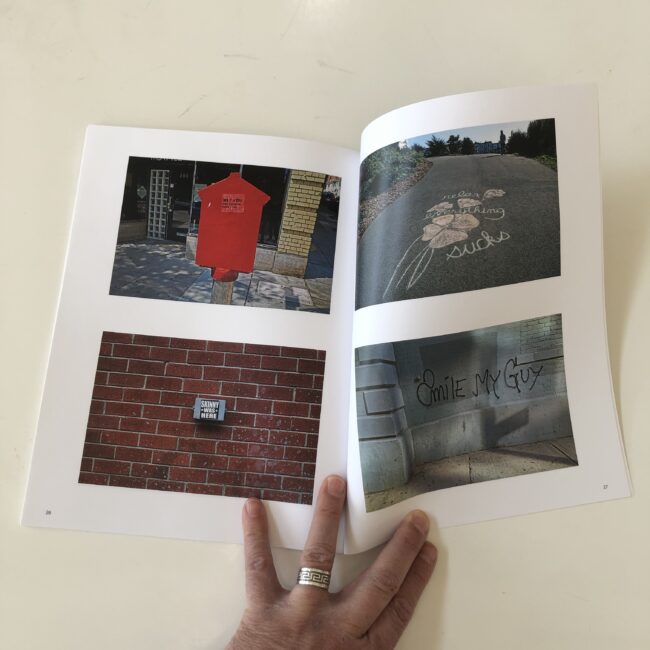 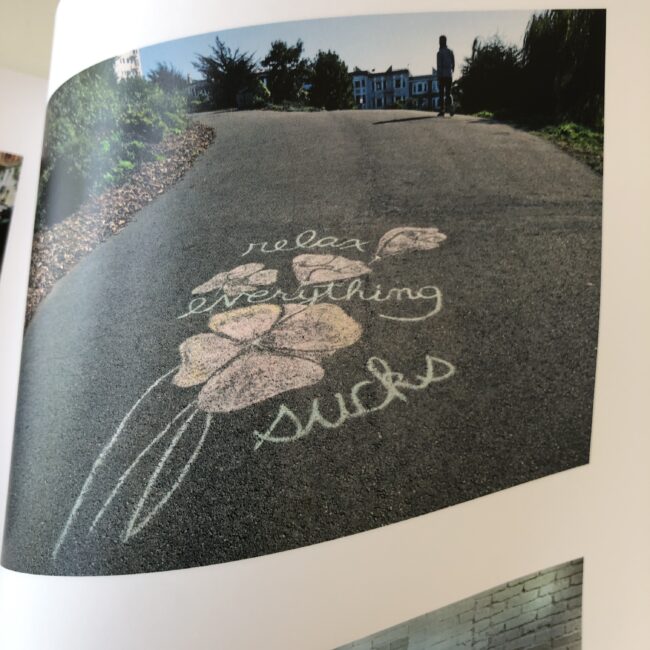 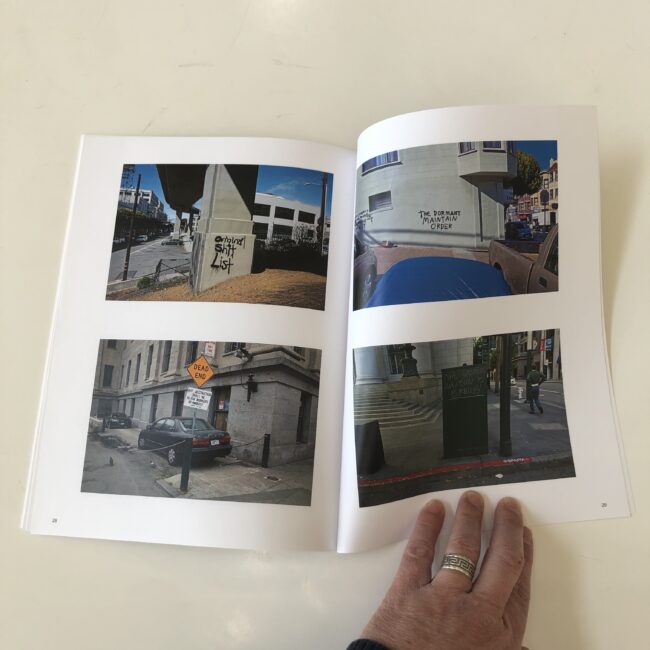 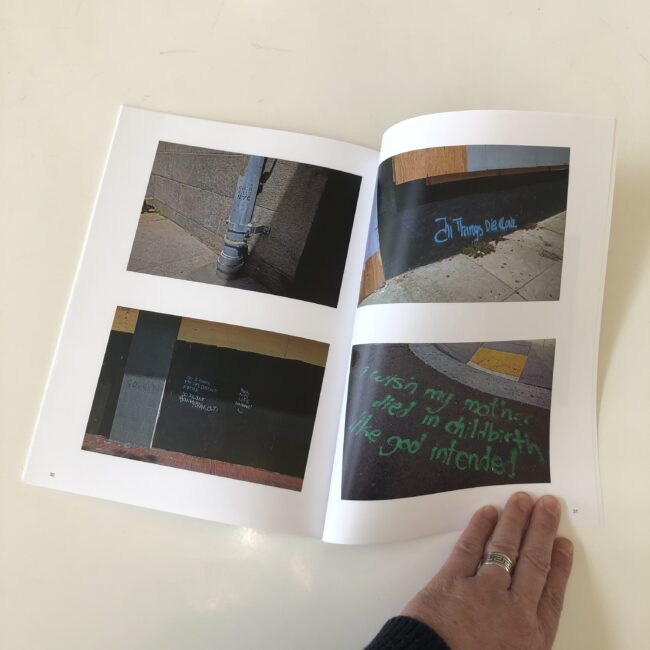 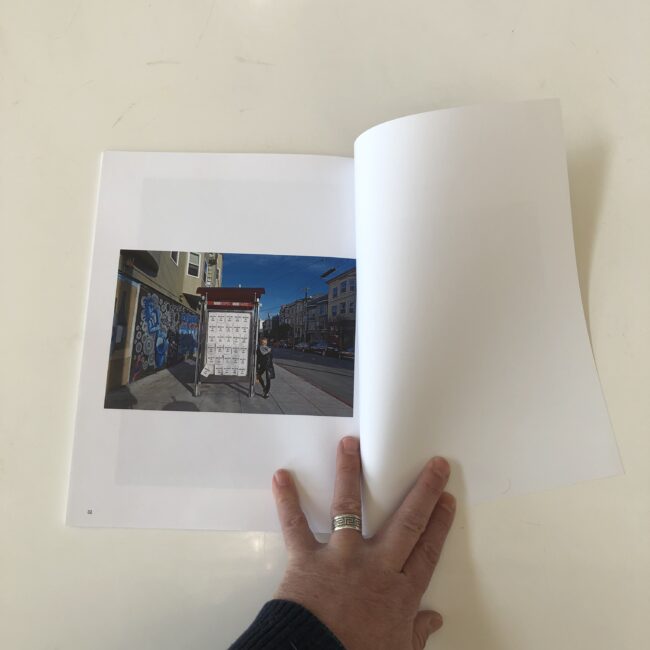 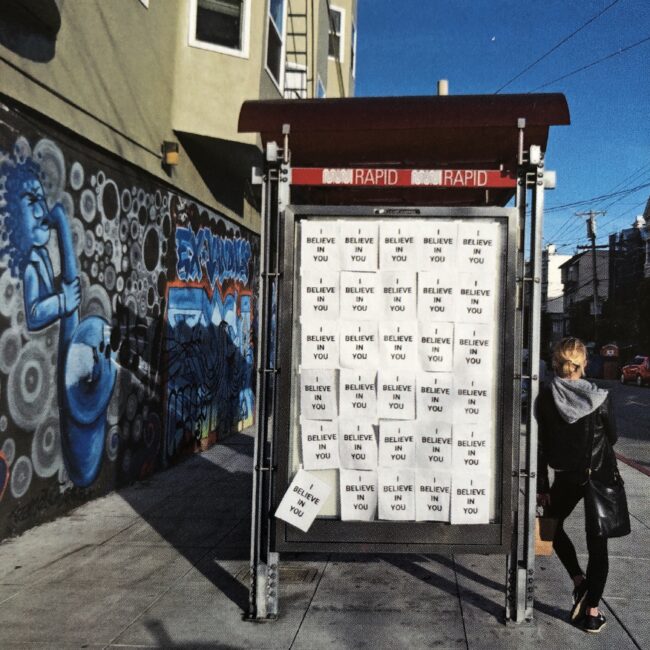 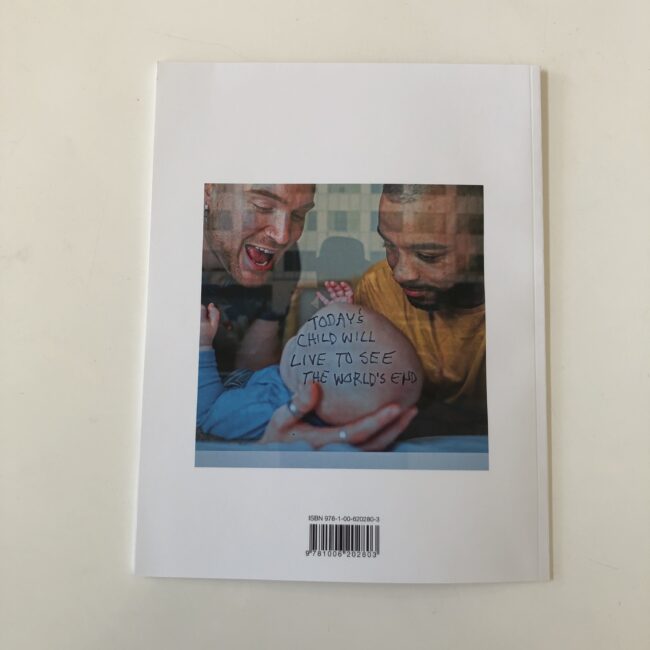 The Art of the Personal Project: Judy Polumbaum