Six years ago, I and my wife, Claudia Brose, who is from Germany, moved from San Francisco to Appiano, a small town in the far north of Italy, close to the Dolomites. Claudia has her own company, the IF/Academy, which organizes photography events and workshops, mainly for clients from Germany and Switzerland, including an annual four-day Summer Academy with a group of top photographers at an historic winery. During the rest of the year several 3-4 day workshops are offered for smaller groups of 5-8 people.

A few years ago, we traveled for the first time to Naples (Napoli in Italian) for Claudia’s birthday and we were impressed by the energy and warmth of the historic southern Italian city. In recent years the IF/Academy has offered workshops in Venice, which were successful. But we always had the idea to return to Napoli one day to do a workshop there. Two years of Covid restrictions placed that idea on hold. But this year we were finally able to offer it and the idea was so well-received that we ended up doing two workshops, back-to-back, in March. We made a scouting trip a few weeks before, to shoot, make some local connections and plan what we would do and where we would go during the workshops. The theme was to be Street Photography and Napoli is a street photographer’s absolute dream location. It is a city which is a non-stop theater of life with a population and culture that is warm, open, and vibrant. And fun. Very, very rarely does anyone object to being photographed, especially if you are just friendly and kind in your approach. The sensory stimulation in Napoli is intense and more or less constant, so much so that at times it can be overwhelming, and you may feel the need to retreat to a quiet space for a while. But at the end of some long days of shooting, always traveling light, with a minimum of gear and walking, a lot, we usually returned home with a very good and diverse selection of images.

So… I fell in love with Napoli. It’s a wonderful, sometimes difficult place, with a long history. It has a glorious past but a not-so-glorious present, thanks to lots of poverty and years of neglect. The well-documented history of organized crime and its grip on the city, as well as the popular, long-running TV series Gommorah, about the Camorra, the Neapolitan mafia, have also not put the city in the best light. It’s a chaotic and dirty place for sure, and more than a little run-down in many places. But the people win you over, cheerfully and admirably just improvising and getting on with life in spite of the obstacles. Napoli definitely has its more prosperous neighborhoods, like Vomero, Posillipo and Chiaia. But the really interesting places are elsewhere, in historic areas like Spaccanapoii, Rione-Sanità and the Quartieri Spagnoli, those crowded, poorer neighborhoods of narrow alleys and busy streets where life is largely lived loudly and out in the open. Napoli, and Neapolitans, are unfortunately frequently looked down upon by much of the rest of Italy, especially by those from the more prosperous north of the country. Although I suspect many of the city’s critics may have never even been there and are just repeating what they’ve heard, the common belief that it is simply wiser to avoid Napoli if you can.

Two things you see everywhere are motor scooters and pictures and murals of Diego Maradona. The Argentine soccer legend, who died prematurely in 2020 after a long period of post-career drug and alcohol addiction and personal turmoil, in the late ’80’s and early ’90’s led the local professional soccer team to unprecedented glory, winning two Italian championships and the UEFA Cup. He will always be revered almost as a saint in Napoli for having brought respect and dignity, nationally and internationally, to a city that had rarely ever received much of either. The week after his death the gigantic San Paolo soccer stadium in Napoli was renamed after him. The ongoing veneration of Maradona probably explains a lot about the city’s collective psyche.

I have been warned many times over to be wary of pickpockets, thieves and tricksters while in Napoli. While they surely exist, in truth I have never encountered any. I have had only positive experiences that make me want to just get up every day and go out to make more and more pictures of this enchanting contradiction of a city. And to return as soon as possible so I can do it all over again. My desire to do a street photography workshop here has now evolved into an ongoing personal project. It feels almost like a mission at times. I want to give this place its due, I want to reveal it as it really is, or at least as how I perceive it to be. And in so doing bring more awareness, if not respect and dignity, to this complicated but always magical place. 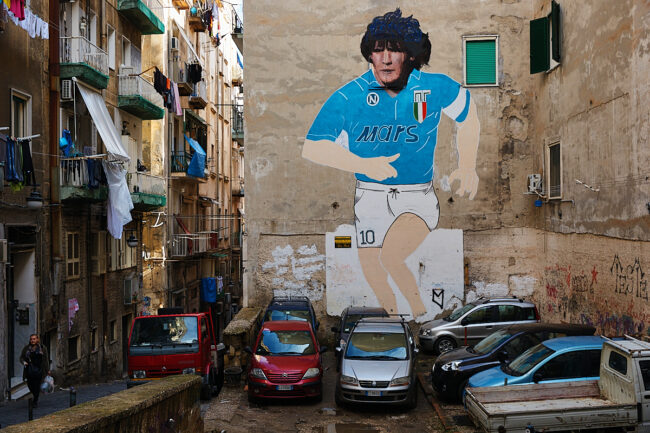 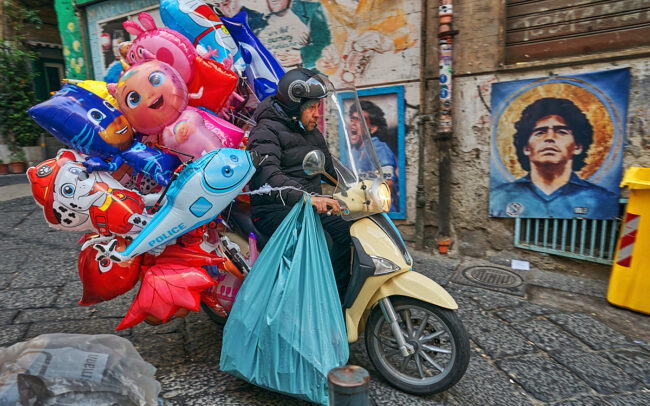 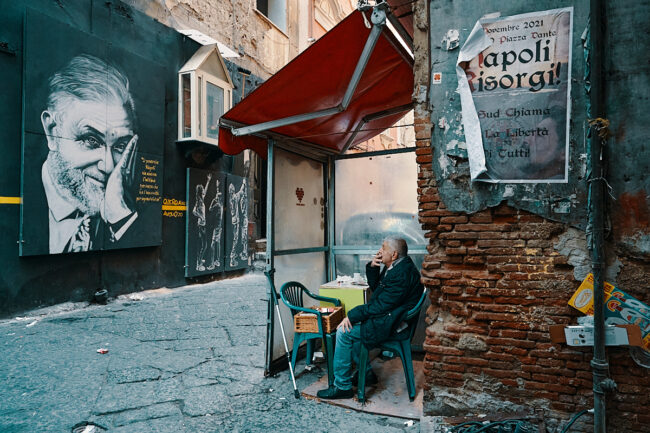 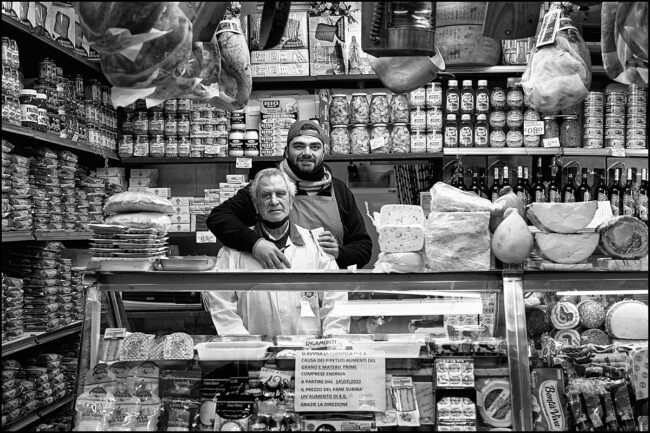 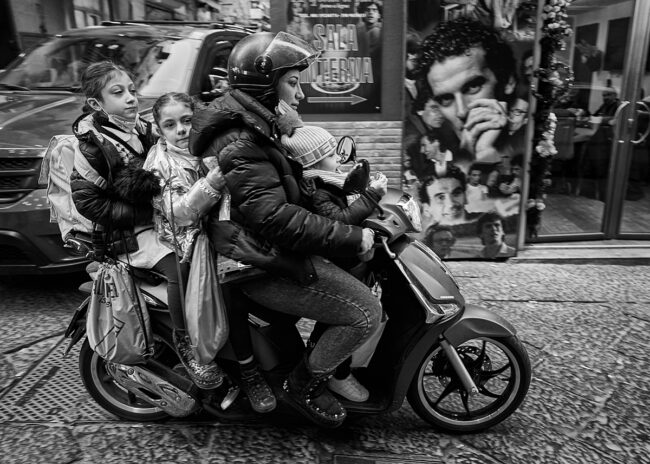 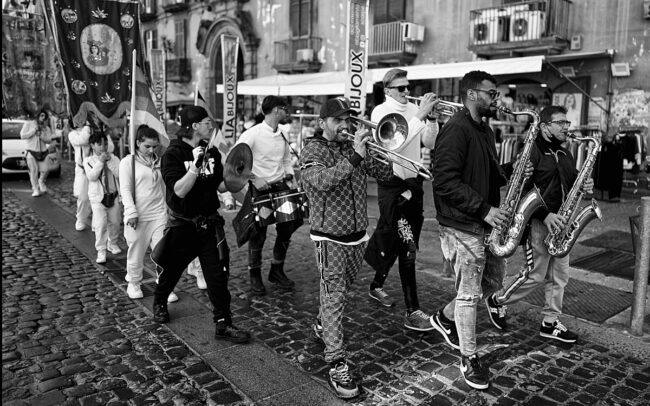 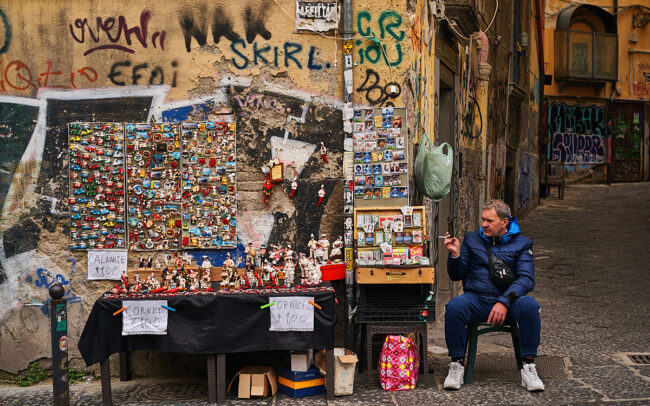 To see more of this project, check out my Napoli Street Photography video on YouTube: https://www.youtube.com/watch?v=kzQ0sWtFK24