This Week in Photography: Voting Time

“Now that I’m home, and the road is behind me, I’d like to thank everyone I met who showed me a good time, and reminded me that we need no Orange King to make us great again.

I never intended to be political.

But I was given this amazing opportunity, to write for thousands of smart artists, editors, writers, educators and photographers, and I’ve always taken it seriously

So speaking my mind, with respect to politics, was a natural evolution. Why would I keep such an important part of my world-view to myself, in a long-running weekly opinion column?

With all this freedom, to stay silent on the biggest issues of our times would have been moronic.

Will any polling places get shot-up with AR-15’s?

Will mask-wearing voters rumble with anti-maskers in the streets of America’s cities?

Would such a sentence have even been comprehensible if it appeared in this column 4 years ago? (Maskers and anti-maskers…WTF!)

If you read the opening quote carefully, you’ll note that I had just been out on the road, as I’d covered Chicago, NYC and LA all within a few months.

Travel, and fresh impressions, were aplenty.

(Now, I walk in circles around the dirt roads of my neighborhood, multiple times a day.)

I also called Trump an Orange King, as I’d been critical of him for years, by that point. (And I was very, very worried he would break the world.)

But I also took a pretty Pro-America, positive stance, which is not something I’d do so easily 4 years later, now that Trump has indeed broken the world.

It’s been much easier to criticize this society, as it’s gone to seed, and Americans have turned on each other to the point that trying to save other people’s lives has become such a contentious political issue.

(You can’t force me to respect other lives! It’s my freedom to do what I want! When I want!)

But here we are.

It’s cold outside. Taos County, where I live, has seen a 50% spike in Covid-cases in under three weeks, and the future of our country, (if not the entire world,) is at stake.

Everyone needs to vote.

Some felons are stripped of the right, and in other cases, the legal hoops required to register flummox citizens into giving up without trying.

But at least women can vote, right?

I mean, can you imagine if they couldn’t?

It seems like a pretty ridiculous thing to say, but the truth is, (of which most of us are oblivious,) that it was only 100 years ago that women were granted the right to vote in America.

In the big picture, that’s nothing.

Within the last 160 years, this country had slavery, fought a war against it, took all the West from the Native Americans, and then slowly allowed certain segments of society to attain rights, but only when they fought for them.

That’s the big point I want to make today.

Just because things are so crazy, so perpetually on fire, we assume the world is irreparably wrong, or America is in a death-spiral, and that’s that.

The cynicism of the Trump era, on top of the mendacity and fear-mongering, has worn us all out.

But as creative people, we have the talent and skills to communicate big ideas and messages. (It’s literally what we do for our living.)

So sometimes, fighting for our rights, demanding things get better, and shouting it from the rooftops, is absolutely the way to go.

It’s what allowed each insane batch of prejudices and morally bankrupt ideas to fall away, a bit at a time.

I mention all of this for obvious reasons, to get you inspired, but also to give props to two different groups of my colleagues, who are making a difference.

First up, this column was motivated by A Yellow Rose Project, a website/curatorial venture put together by Meg Griffiths and Frances Jakubek, which features the work of 100+ female photographers.

Each was given the chance to make work in honor of the 100th Anniversary of the 19th Amendment, and it features dozens of super-talented women that I’ve met on my festival travels over the years.

So many photographers I’ve written about here, or shared a meal or a coffee with.

It’s an amazing cross-section of our field, and I highly recommend you check out the work on the website, though I’ll feature some images from the homepage below.

Secondly, I wanted to also give a shout out to Andy Adams, of Flak Photo and associated projects, who recently launched a collective online effort to get out the vote.

It is an opportunity for photographers to be creative, try to push others to do the same, and in a non-partisan way, hopes to get more Americans involved in the voting process.

I’ll also include some screen-grabs from the # on IG below, but encourage you to search through the archive. (Editors note: The archive is much less visible than it was yesterday. Not sure why, but it seems Instagram has changed some rules before the election.) 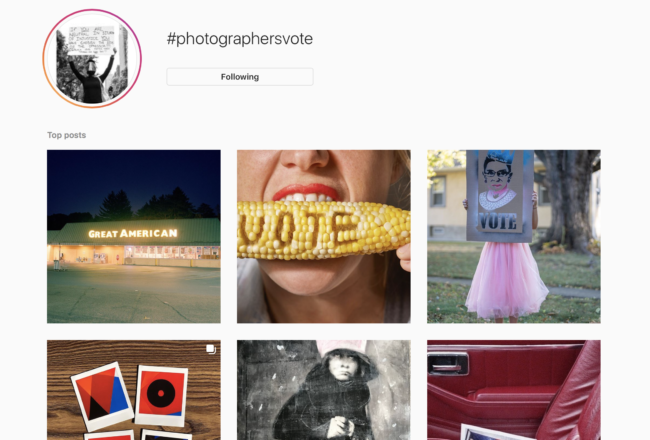 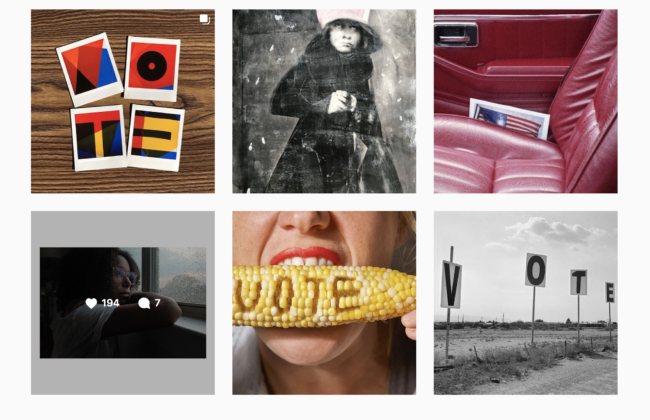 I chose to participate, and posted some images from my voting day experience, and you can too.

If we care about the outcome of this election, and want to vote the Orange King out, it’s the least we can do. (Or you can also donate money, write letters, make phone calls, or put on a scary mask and get yourself arrested.)

Hopefully we’ll know the outcome by then, but I doubt it.

The Art of the Personal Project: Marsha Bernstein