As much as change makes us better, though, we rarely seek it out.

People don’t choose it, if left to our own devices. One needs training, which art school often provides, to temper our natural fear of change, and to learn to trust its inherent process.

Most of the time, though, change is thrust upon us.

It drops out of the sky, like an asteroid, ready to lay waste to the dumb dinosaurs below.

I mentioned this today, (writing on Wednesday,) because by the time you read this, it will likely be public knowledge that the New York Times Lens blog, my erstwhile employer, is shutting down at the end of this month.

You guys know me, and writing as I do here, straight from me to you, is my particular speciality. Yet for 6 years, I learned how to write like a proper journalist.

No fucks, or shits. No first person narrative.

Thanks, NYT, I appreciate it!

But I only wrote a handful of times a year at Lens, by the end, and the money won’t make a difference in my life. (Though, like working with teenagers, I’ll miss the action.)

Rather, I feel for all the photographers who won’t be spot-lit across the globe. That blog had reach, and reach can = impact.

Speaking from experience, having “The Value of a Dollar” go viral from Lens MADE my photo career. That work is on the wall in a museum in Germany now, in 2019, and that never, ever would have happened without Lens.

These days, there are other places to publish such work. Sure. But for the photographers, losing Lens means losing opportunities.

And other places will have to pick up the slack.

Here in my column in APE, I’ll tell you that we intend to do just that.

For the rest of the summer, we’ll have portfolio review articles, exhibition reviews, and adventure pieces from the field. Between Denver, Portland, and wherever the hell I end up in Europe next week, there will be many stories to tell.

And I intend to show you the work of DOZENS of photographers.

There will be much to see, and after years of book reviews, we’re going to chill a bit on that, and bring them back at the end of summer. (Unless I need a brief break from all the action.)

Speaking of action, given the headline on this piece, I should be talking about my take on New York City and New Jersey in the 21st Century.

The Big Apple, and one of its primary suburban arms.
(Two thirds of the Tri-State Area, if you will.)

When last I left you, we’d talked about the development of NYC architecture, specifically Hudson Yards, and how a new NYC was rising in the ashes of the old. 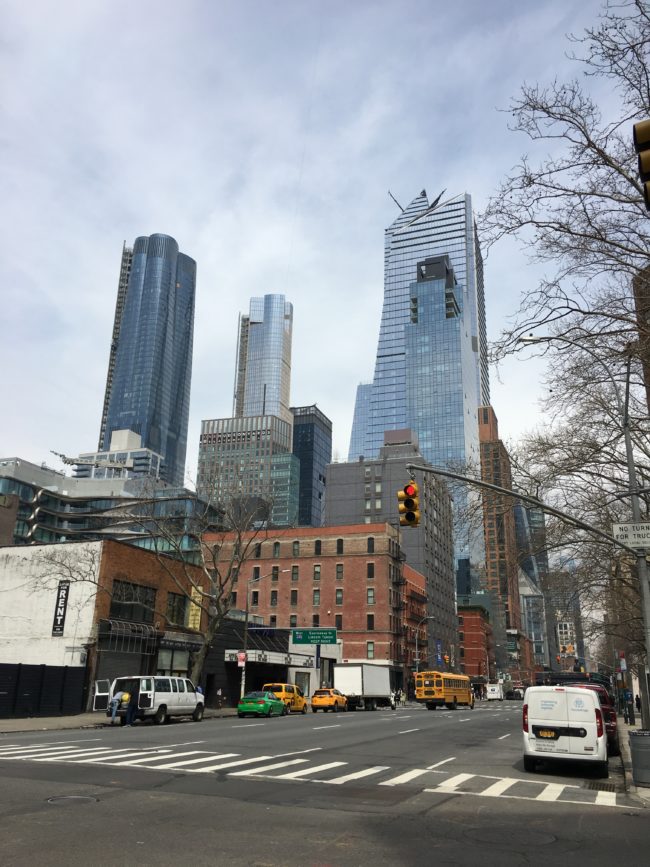 View of Hudson Yards from the South

Sure enough, when I spoke with a long-time New Yorker in Portland, and mentioned that I’d written about the Hudson Yards Project, his first comment was to complain about how it impacts locals.

I shit you not.

The first words out of his mouth.

Change is not only scary, but it doesn’t always work out for everyone. Particularly, when people aren’t actively working to embrace change: to learn and grow from it on purpose.

(Or when they perpetually get the crap end of the stick b/c of Capitalism, Racism, etc.)

I’ve had some nasty headaches the last few weeks, and I’m sure it’s because I’ve been pushing myself so hard to have new experiences this past month.

Making new neural pathways makes us smarter and better, but I’ve found that it can nearly cause a migraine. (As did all the Op-Art I saw in Portland, but that’s another story for a different day.)

Whether it’s the New York Times deciding there’s no money in a photojournalism blog, or a proud city regaining it’s mojo in 2019, change is only predictable in its unpredictability.

So while I can laud NYC for its ability to provide the most amazing 14 miles of eating, walking and looking a husband and wife could ask for, and will tell you about it briefly, I get that the “New” New York has more than its share of detractors.

As I’m pretending to be my former mentor Tony Bourdain for the summer, (#RIP Tony,) I’ll first share that Grand Sichuan, on 9th between 24th & 25th, on the edge of the Chelsea galleries, is totally boss.

I love it, have always loved it, and recommend it highly.

As Jessie and I ate our cold spicy noodles and egg rolls, sipping our (complimentary) tea on an extended walking break, she reminded me of the time my cousin Ron took us there for the night with his wife.

Back in the early aughts.

Ron was something of a foodie, had gone to culinary school, and knew to order off the Chinese Only menu. (We had chicken that was killed that afternoon.)

We drank, ate too much, and laughed all night. A few months later, Jessie and I had Christmas dinner at Ron’s house, and decided to move back to New Mexico.

He was one of the early victims of the opioid epidemic. A nice Jewish guy from Jersey.

The canary in the coal mine.

(Hard to segue off of this, now that I think about it, so let’s just keep going.)

Jessie and I ate our way across New York, and thank god we were burning the calories. 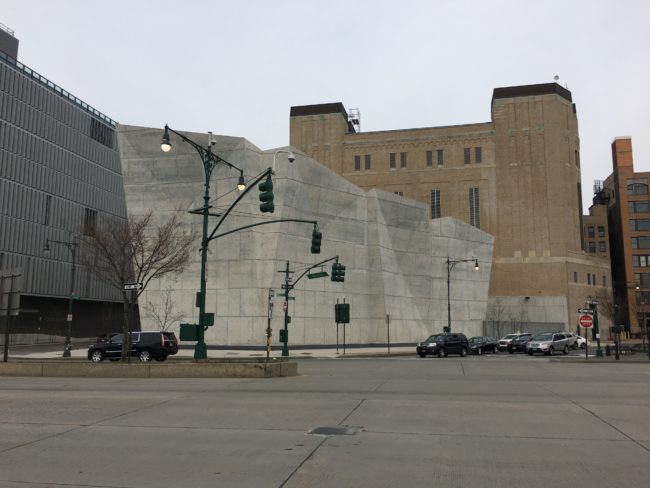 Concrete architecture at the mouth of the Holland Tunnel

Because as soon as we walked East from the Tribeca waterfront, near the Holland Tunnel this time, we stumbled, quite literally, upon the cronut place. 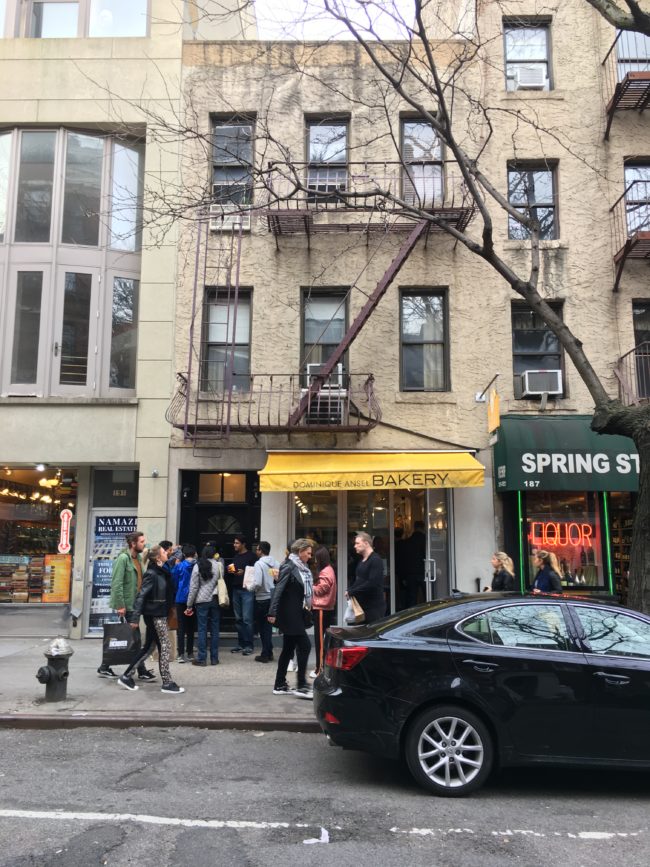 Dominique Ansel Bakery. We read a sign about the line as we were walking by, but there were only 5 people in it. So we joined up, waited a few minutes, and then had some great coffee and pastries.

The salted caramel eclair was divine, the almond coconut chocolate croissant was really good, and the Nutella milk bread was highly disappointing.

They have a lovely outdoor courtyard that was quiet and spacious, which I highly recommend, and the massive Cafe Au Lait powered me up for the walk back to our hotel in Koreatown.

At the recommendation of Darren Ching, of Brooklyn’s Klompching gallery, we went across the street from our hotel to Madangsui, a Korean BBQ place, and ended up eating everything the next morning as breakfast. (As I told you in Part 1.) The food was brilliant: kimchee pancake, and a stone bowl bulgogi bibimbap that the waitress turned over table-side. 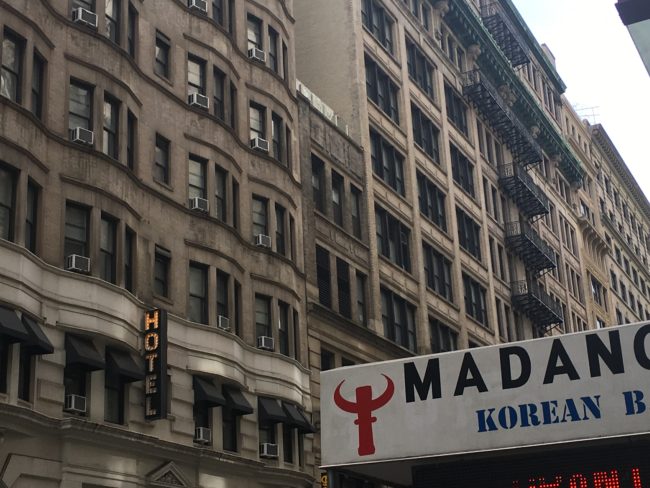 Yes, we ate in New York. The food was so good, and surprisingly affordable. As for the art, Jessie and I visited the Rubin Museum, in Chelsea, and saw some transcendental Tibetan and Buddhist work, including a re-created shrine that gave me goosebumps. 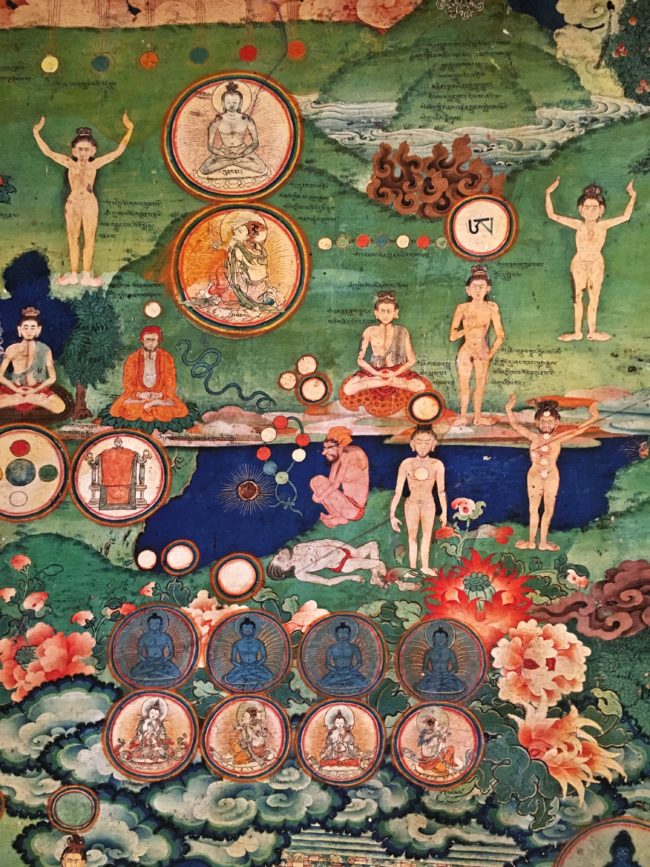 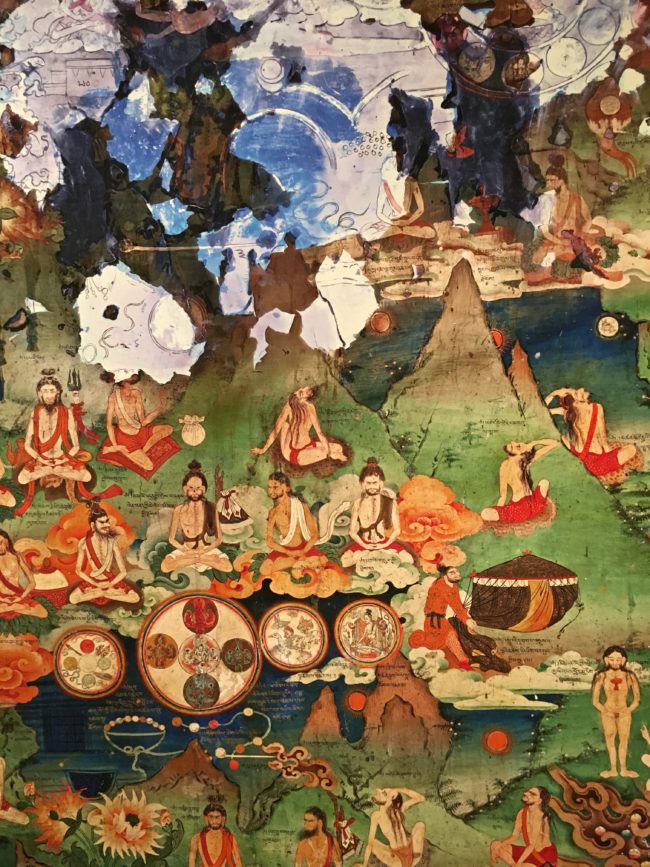 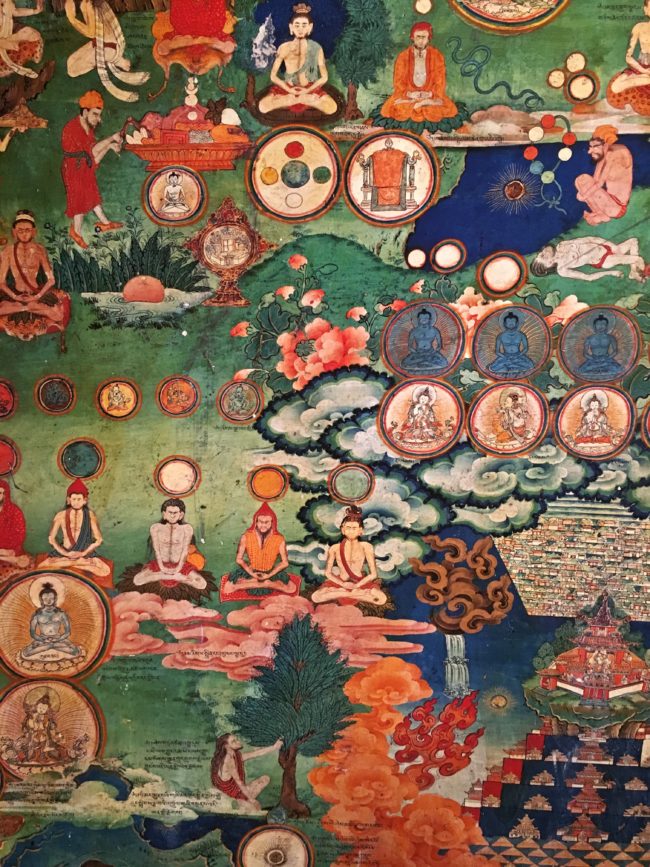 Five stars for sure.

But anyone can tell you about New York City.

New Jersey, though, requires a deft touch. (Me and David Chase. A short list.)

New Jersey never really changes, I thought. The shore, the nasty refineries along the Turnpike.

Bruce Springsteen, and the Best Pizza in America.
Skee ball and strip malls and Down-to-Earth people.

The world I knew was made of 2nd and 3rd generation Americans, the children and grand-children of immigrants who arrived at and ultimately fled New York City.

We had all sorts of Asian-Americans growing up in my hometown of Holmdel, NJ, because there was a gargantuan Bell Labs facility in the center of town.

A massive complex, set a half-mile back off the road, with a trippy-ass-space-ship looking tower in the front, which was as strange as it sounds.

For the uninitiated, Bell Labs was an offshoot of Alexander Graham Bell, and for much of the 20th Century was the most important research facility in the world.

Sure. Why not.
Along with Livermore and Los Alamos, I guess.

It was right there in the heart of Holmdel, a place where they discovered, invented or refined radio wave technology, lasers, internet stuff, and all sorts of things.

It was a Nobel Prize factory, in the middle of corn fields that had been tended by Dutch colonists since the 17th Century. (Legit 1600’s for sure.)

All of a sudden, it was Lucent, and then it was gone.

Out of business.
Permanently.

So an enormous building sat there empty, for years, reeking of the ghosts of America’s past

An Orthodox Jewish developer came along, called it Bell Works, and turned the entire Saarinen-designed-space into a mixed use development. Hotel, conference center, restaurants, shops, an indoor soccer field.

What?
And indoor soccer field? 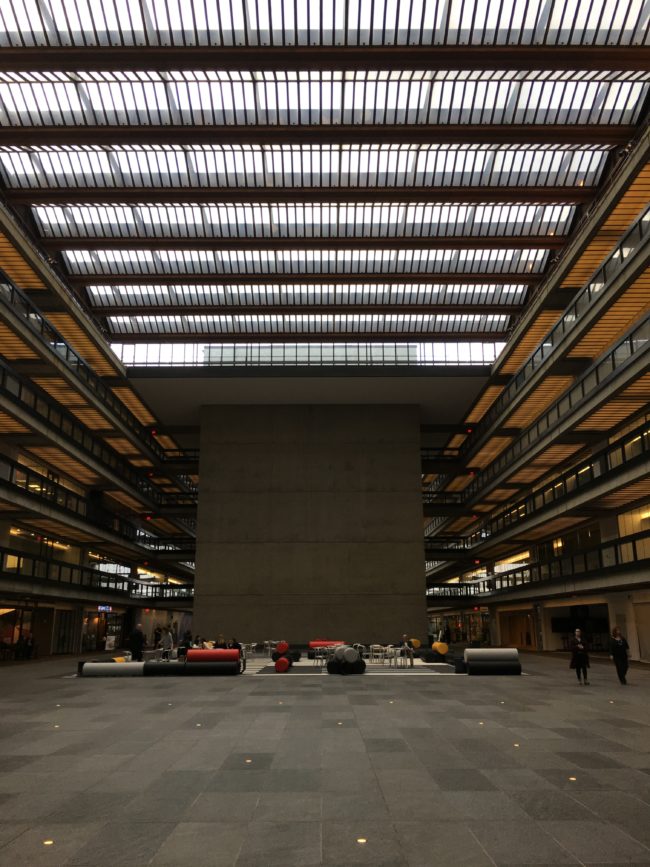 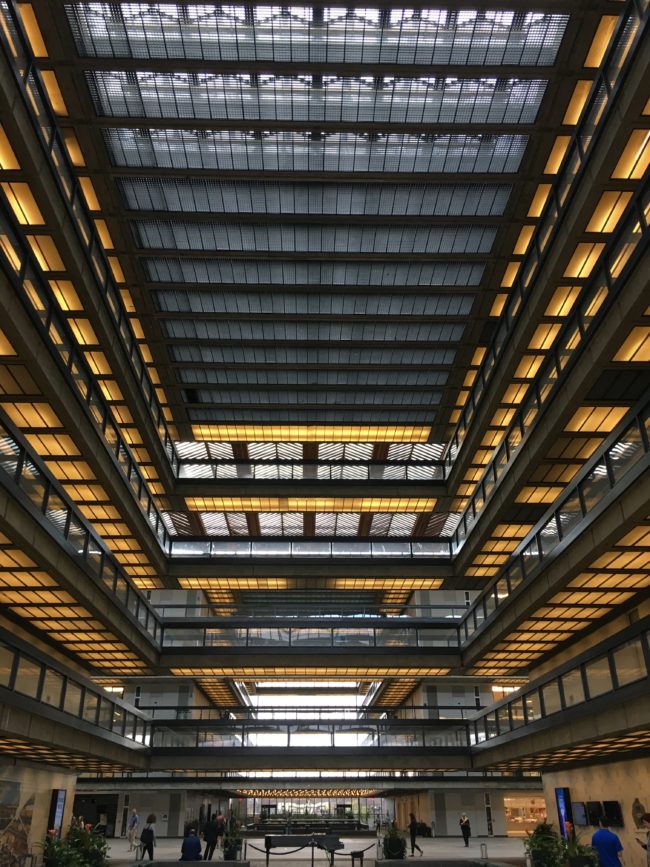 The Holmdel Public Library moved in, and they have a museum area dedicated to Bell Labs and its history. Plus, the place backs up on public park land, so it can be accessed on foot as well as by car.

Jessie and I ate samosas from an Indian-American-run convenience store INSIDE Bell Labs. With tamarind and cilantro chutneys. And it was really good!

Back in the 70’s and 80’s, you could have pizza or Chinese food, burgers in bar joints, or maybe Jewish Deli, and that was about it.

But it’s not the 20th Century anymore.

Not by a long shot.

And New Jersey, like its big brother NYC, also suffered tremendously from Hurricane Sandy as well, which I wrote about here back in 2013 or ’14. (Even I lose track sometimes.)

Sure enough, just like NYC, the Jersey Shore, which had been annihilated by Sandy, is now thriving.

I read in the Star Ledger that Pier Village, a shore development in Long Branch that DID NOT EXIST when I was in high school, was adding an additional 450 condominium units.

And then I went there, as my buddy Felt moved into an ocean-front apartment last year. (My wife and I helped him decorate the place on a stoner ramble through NYC last April that I didn’t write about…)

Me and Felt, (who’s real name is Matt,) hung out at the Bat Mitzvah in North Jersey that drew me East, where thankfully the Italian-American food was flowing, and I drank Hennessy all day like it was going out of style. 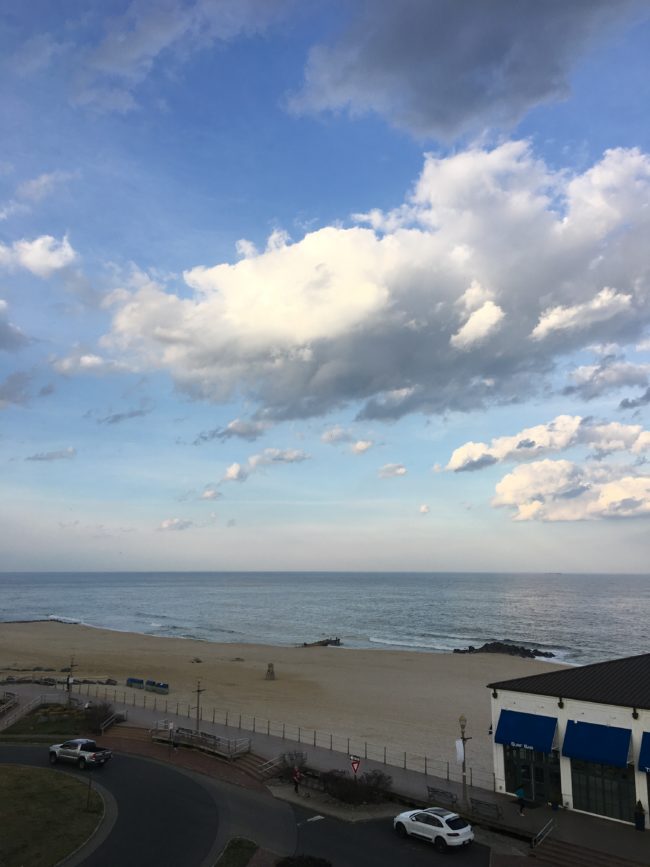 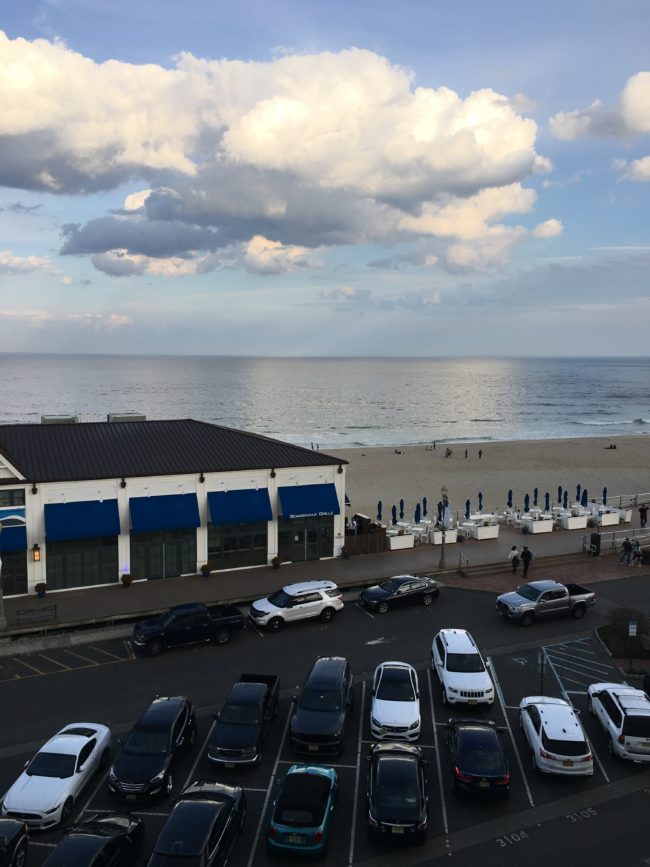 And as Sandy destroyed so many buildings, clearing land, new developments were everywhere, trying to peddle chic.

“South Beach at Long Branch” is a thing.

My theory is that once the Millennials decided Asbury Park was cool, as it gentrified, and they lacked the same biases against Jersey that their parents had, (Hamptons or bust,) it only made sense that these other beach towns, closer and MORE accessible, would start getting hot. 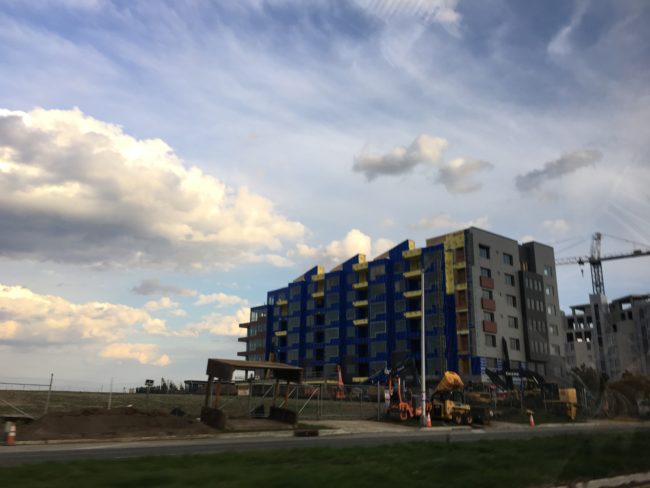 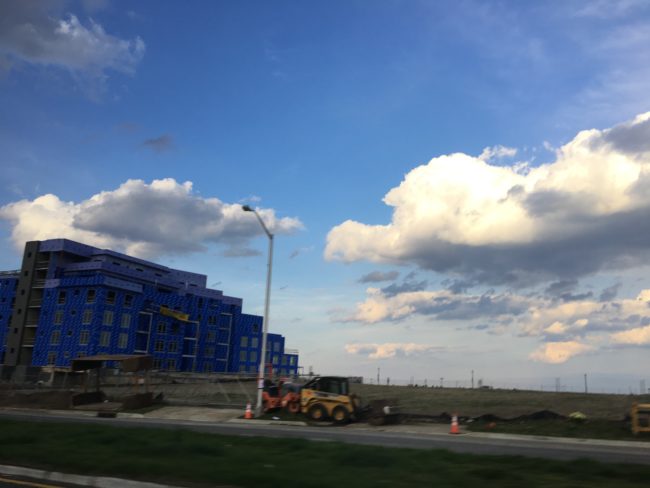 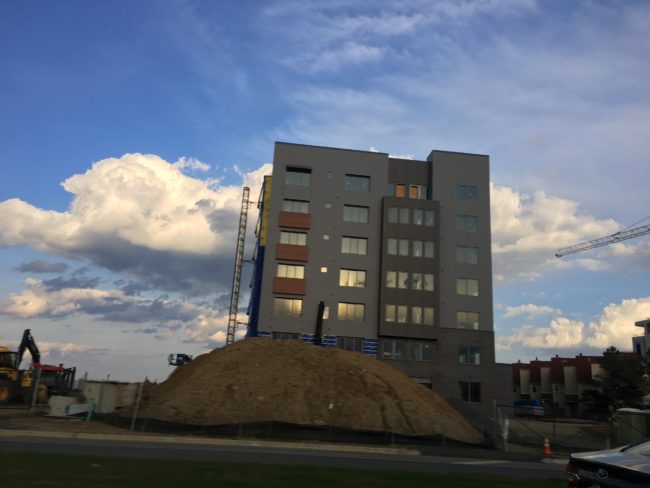 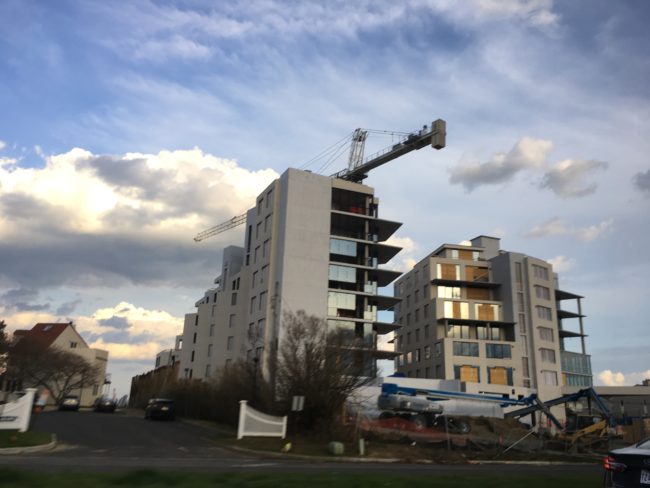 Rather, I think anyone who hangs out at the Jersey Shore will just end up getting Jersified.

So do ya-self a favuh, eat some great calamari at Rockafellers, ride some waves this summuh, and make sure ta tell ya friends.

You know what I’m sayin’? 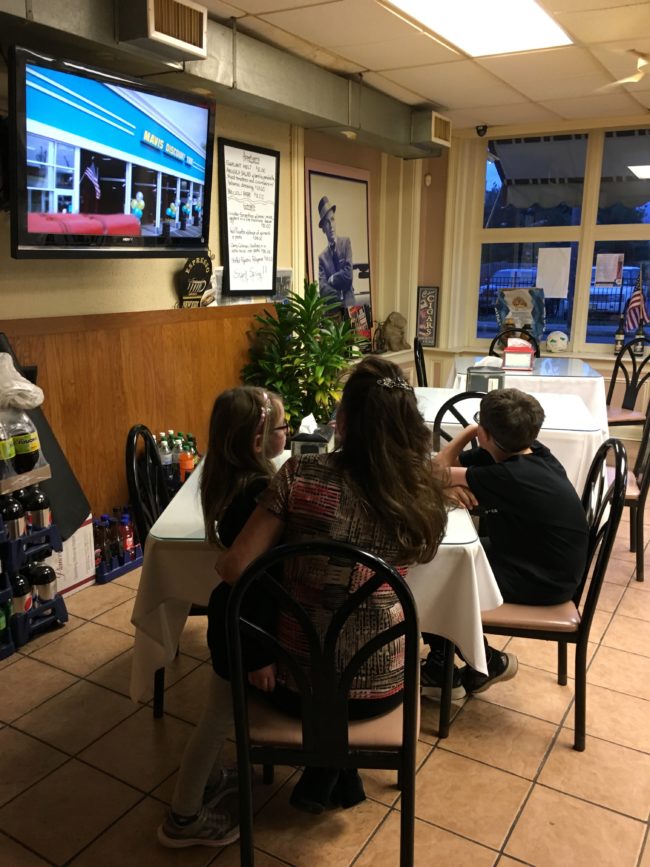 My Aunt and kids after dinner at Rockafellers.

There Are 7 Comments On This Article.