Of the American cities I know well, Chicago might be my favorite.

(Though San Diego and New Orleans are in the conversation.)

Chicago offers everything, at a world-class level: beaches, architecture, art, food, music and diversity, in a walkable, clean, urban megalopolis. I’ve said it before, but the buildings are so gorgeous, it’s like walking around a massive, public art installation. 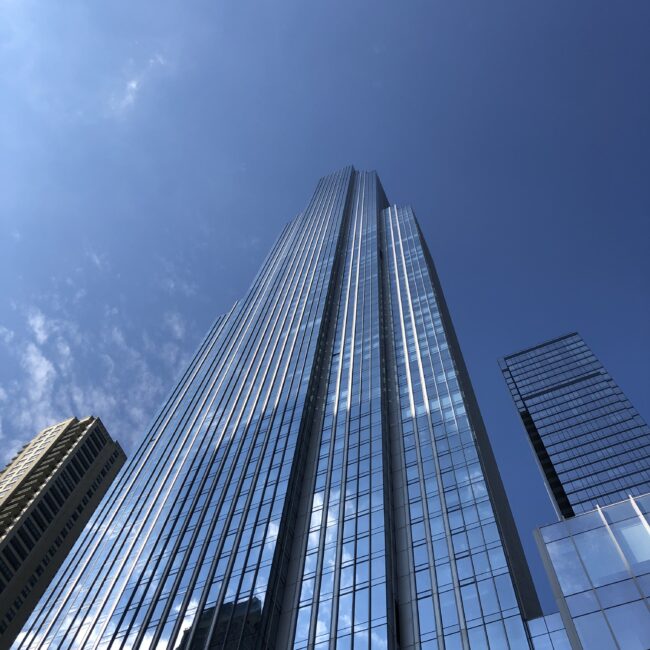 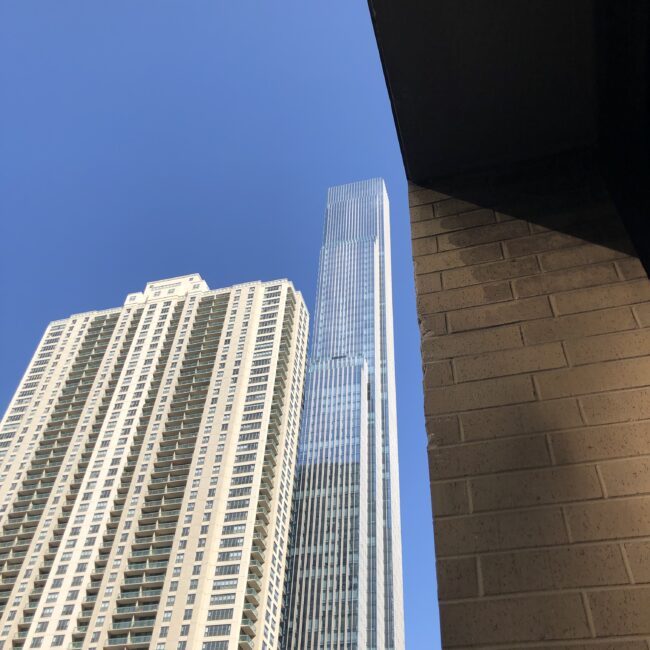 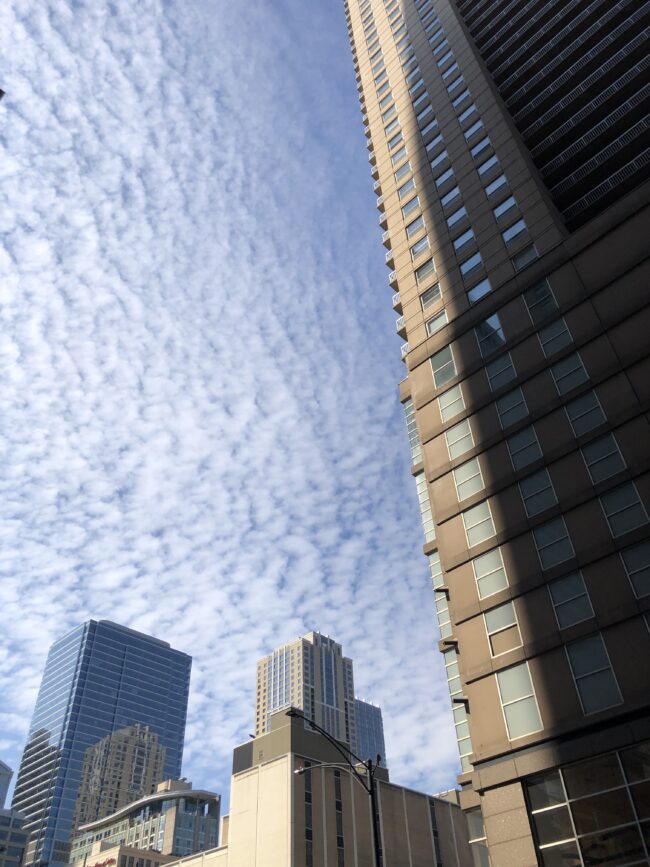 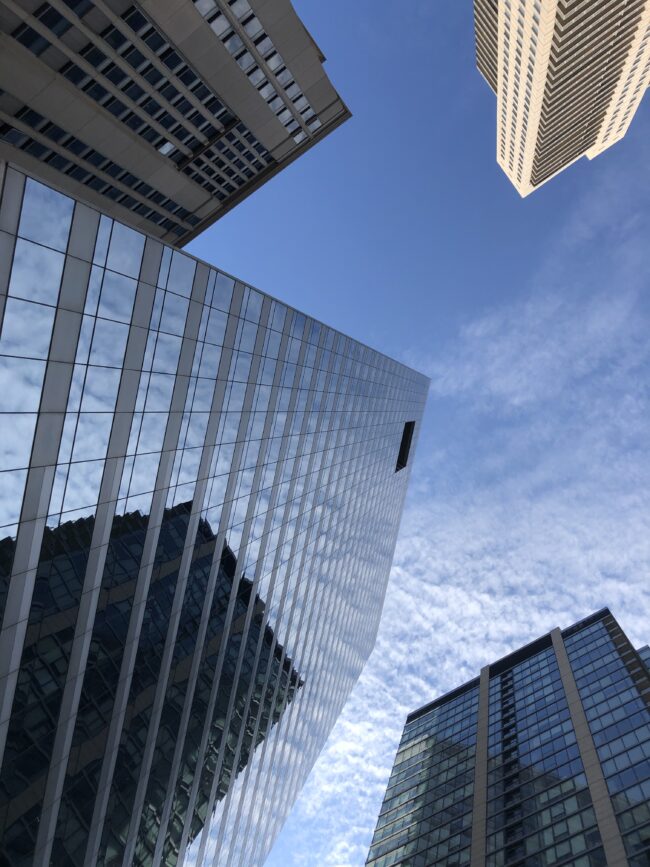 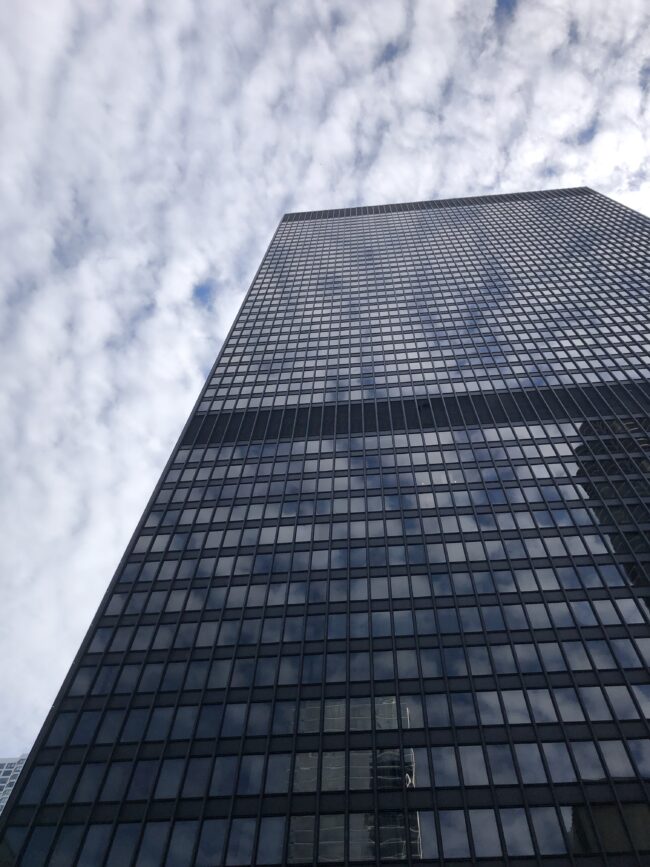 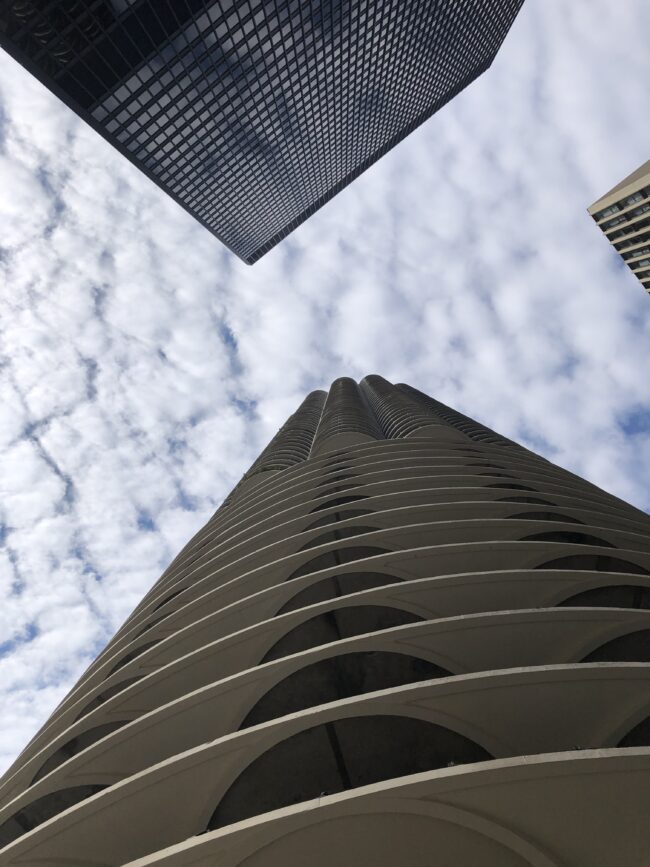 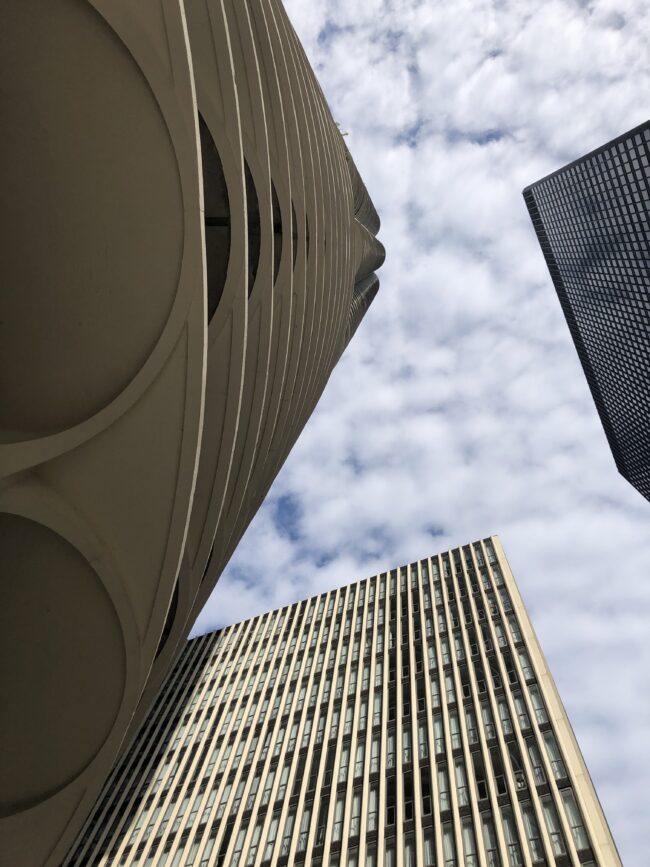 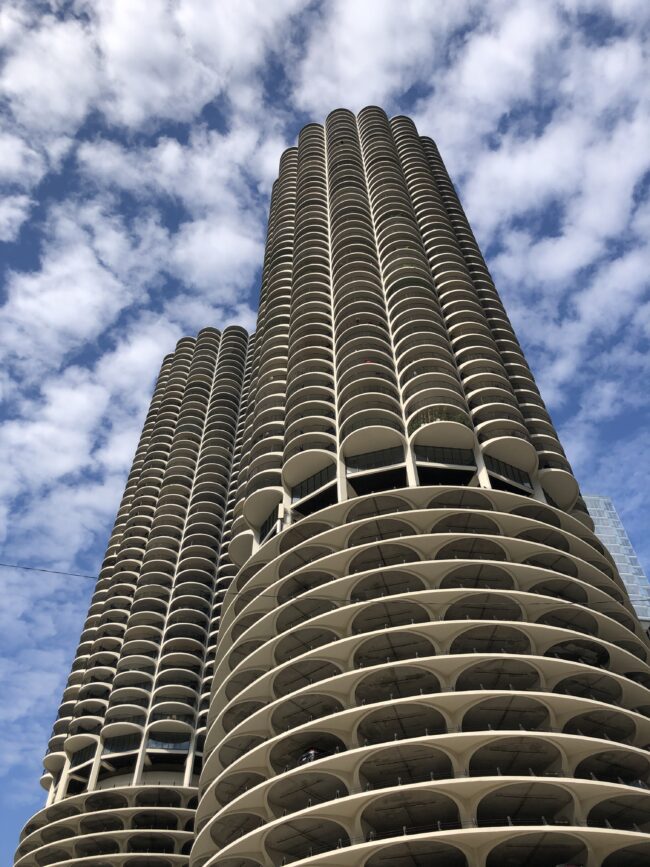 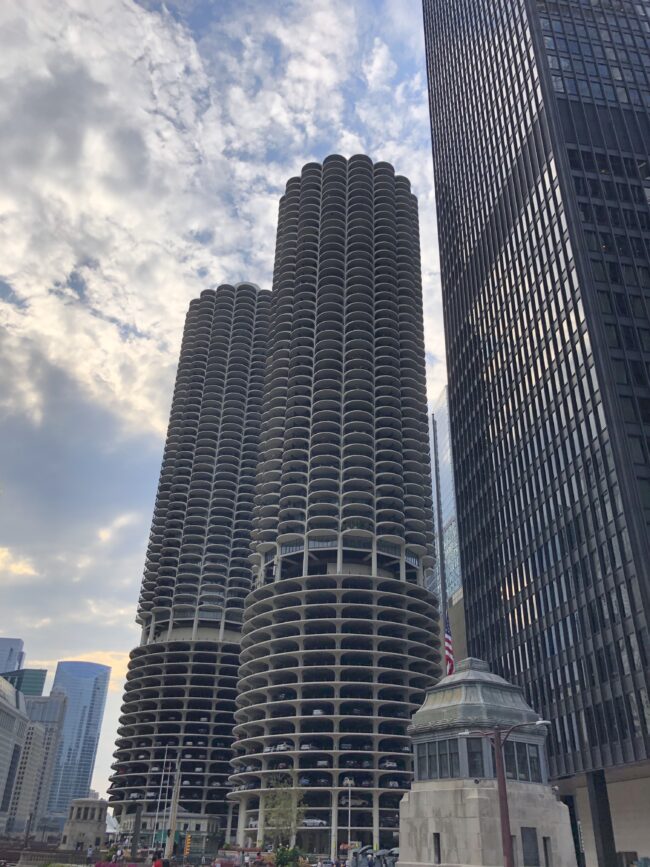 That Chicago has always been a little-brother city means it’s had to work extra-hard to distinguish itself.

New visitors are surprised by how big it is, how clean, and how picturesque is the setting, with the ocean-blue lake and serpentine green river.

The Chicagoans are nice, hard-working, and humble as the day is long. So when I visited last week, (just got home Sunday,) I was expecting a tight-gripped, large-person, bear hug, as Chicago always treats me well.

This was my 7th visit since 2015, and I’ve spent well over a month in the city since.

I have great friends, always talk to strangers, eat well, and never have drama.

This time, however, I got a little cocky, (acted too big for my britches,) so I got a proper Chicago-style beatdown.

While my trip was efficient, as I said, it left little time for stopping to buy food.

And as soon as I got to the 21C Museum Hotel, for the Filter Photo Festival, the rest of the reviewers were heading out the door to the welcome party.

(So that added time pressure.)

Trader Joe’s was literally across the street, and I’ve already told you about my room-booze technique, which saves a lot of money at the bar.

Bourbon sounded like the perfect thing to put some pep in my step, so I bought a bottle of Bulleit, but was too tired to think about searching for food, (and too intimidated to roam the TJ aisles.)  So I showered, threw back a few glasses of whiskey, and was out the door for the 1+ mile walk North.

Do I know better than to drink on an empty stomach?

Of course I do!

Then, I didn’t dig the food when I got there, and as I’d jumpstarted my evening with the bourbon, and switched to white wine at the party, I was quickly too inebriated to make good decisions.

So not eating, and mixing drinks.

At the bar afterwards, my friend Doug offered me a pint of Guinness, and then someone else gave me a light brown beer.

We stepped outside to smoke a couple of times.

Because I was so tired from the travel day, and hadn’t bought any food at Trader Joe’s, there was also no late night grub in the room.

(Nor leftovers, as I hadn’t had time for takeout.)

And we weren’t in a part of town where there were restaurants open.

That was mistake 3, adding nothing to the sad stomach, after the fact, to soak up the booze.

Oh man, was it going to be a nasty morning.

Earlier in the week I’d bragged on a group text, arrogantly saying I never get hangovers.

That I had the perfect remedy, and really, getting too drunk was for suckers.

Unfortunately, I got cocky in Chicago, and the city doesn’t cotton to hubris.

To say I threw up four times before 8:30am is to be factually accurate, but contextually mild.

I definitely called my wife, begging for empathy, and genuinely wondered if I might have caught a bug in the airports? At first, so sure of my own invulnerability, I couldn’t imagine my pain was self-inflicted.

I’m a dude who knows how to handle himself. It’s a part of my identity.

Yet there I was, curled in a fetal position in the shower, begging my poor body, which I’d just abused, to find enough energy to review 14 portfolios that day.

I’m told I looked like death, with bloodshot eyes, raccoon-bags beneath them, and ashen, waxy skin.

By afternoon I’d rebounded, and by evening, I began my 3-types-of-pizza-in-3-days foray, which we’ll talk about next.

But the big moral of the story was explained to me a few times over the next few days.

If you’re going to be too full of yourself, stay out of Chicago.

If, however, you make an ass of yourself, but then learn your lesson, take your humbling like a pro, and grow from the occasion?

After the beatdown, Chicago picks you up, dusts you off, and gives you a hug.

My friend Louie Palu has railed against Deep Dish as long as I’ve known him, claiming it’s not pizza.

That it’s for tourists.

They’re a block away from each other, and apparently begat the trend, back in the day.

They’d been recommended to me before, so I was down to try it, but truth is, it was the first food I was going to eat since I was sick, and as Pizzeria Due was on the corner of my block, that’s as far as I was going to order it. 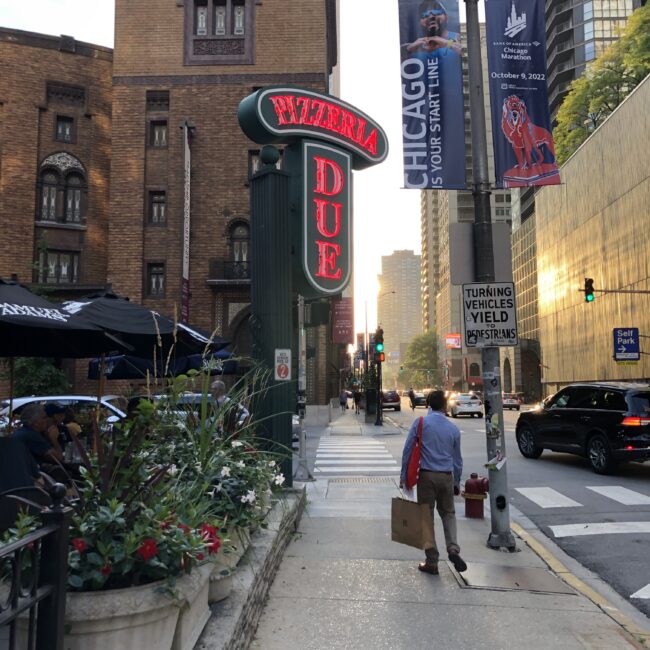 The place reeked of character, and when I saw a pizza with spinach and broccoli on the menu, I was sold, because I needed a little nutrition to jumpstart my system.

Did I assume I’d be the only person ordering that pizza that night?

So when I got the pizza home, and after I took the picture, I was a little surprised not to see much green inside. 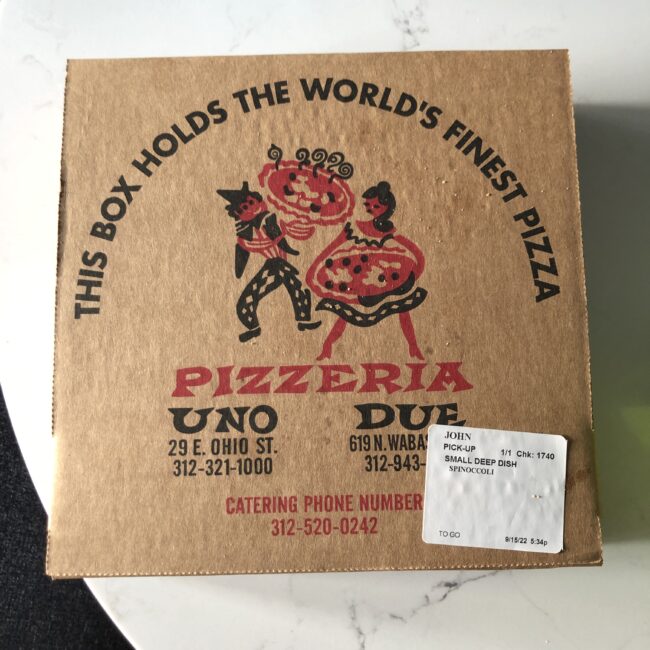 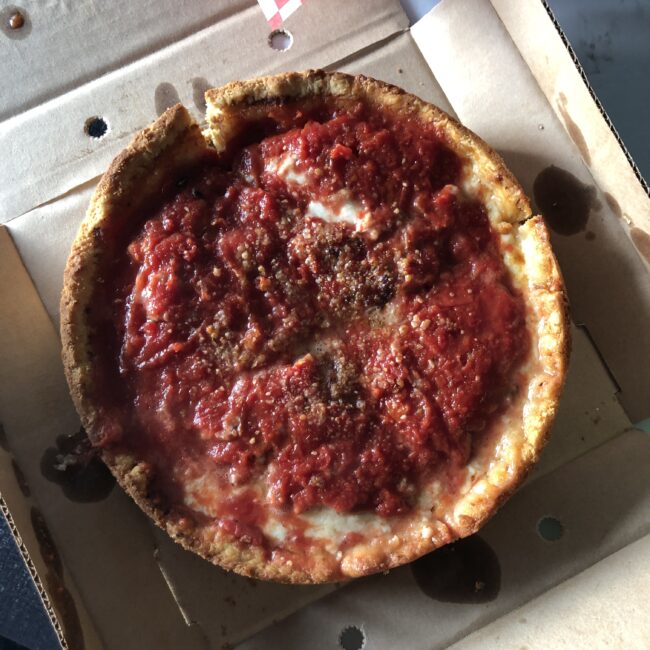 Still, I thought, the veggies have to be in there.

I cut into a slice, (which looked quite good,) and wouldn’t you know it, I bit into a piece of sausage, but no veggies.

(For those of you who don’t remember, last year, at Tempo Cafe, they gave me sausage in my eggs, rather than green veggies, in the most Chicago of all flexes, and I ate it, b/c sending it back would have taken forever.)

This time, though it tasted good, I didn’t feel I had an option.

My hung-over body was begging for green vegetables, (just like in Jersey,) so I called Due, the woman apologized and said my pizza was there waiting. I went down the elevator, made the quick walk, and came home with a veggie pizza.

Which was sad, I’m sorry to say, and definitely not as good as the pizza she made me return.

(Seriously, once I’d eaten from it, maybe let me keep it? What else are you going to do with it? It wasn’t my mistake. The sticker on the sausage pizza said spinnocoli.)

As to the pizza, the cornmeal crust was too-thick, and flavorless. The pizza had too little cheese, and the sauce was weak.

Pizzeria Due
1 star out of 4

The next day, though, I had pizza at Eataly, the Italian food mega-emporium chain that was started by the (since-culturally-defenestrated) superstar chef Mario Batali, and his partners, the Bastianich family.

I’d done the walk-through the day before, and found it to be a well-stocked joint, but a bit confusing to figure out.

On my return visit, having done the proper scope, I knew just where to go: La Pizza & La Pasta.

I ate with a few friends and colleagues, and was clear that I’d only share my pizza once I was done with it, as I was terrified of getting stuck with an unfavorable pizza experience, given the nightmare that was Due.

(Good thing too, when anchovies and mushrooms were suggested as possible toppings. Gross!)

We began with some arugula and parmesan salads that hit just right. 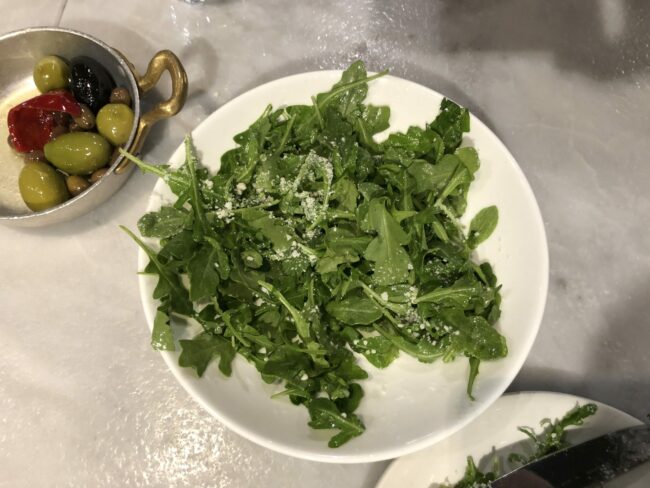 The pizza was in the Neapolitan style, and I got an eggplant parmesan pie, which was sublime.

The pizza had char, for looks, a firm-yet-chewy, flavorful crust. There was plenty of melty, high-end mozzarella cheese. Overall, the perfect balance of texture and taste. 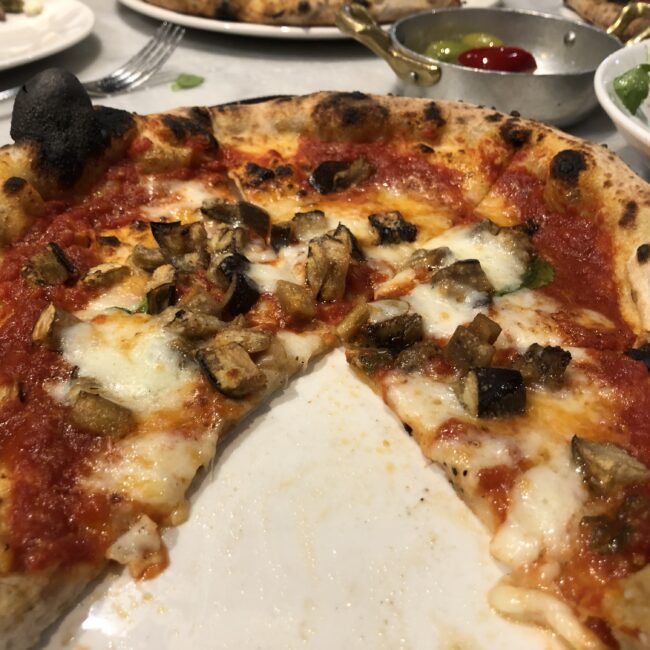 The eggplant was not deep-fried, and offered a nice melt-in-your-mouth component.

Frankly, it was pizza bliss.

Last, but not least, I returned to Eataly to buy some Italian cookies for my wife, on Saturday, right before I needed to walk 30 minutes South to the Columbia College Student Center, where the Filter portfolio walk would be held.

After giving the store a quick once-over, I spotted a gorgeous $6 hunk of Pizza Margherita, in their Pizza Alla Pala station. 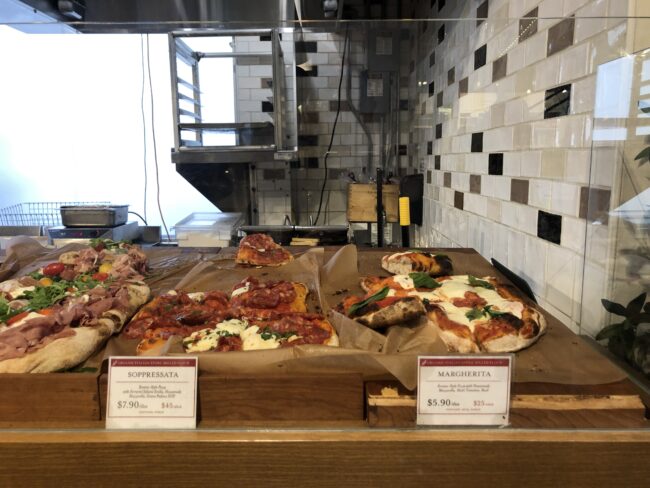 It’s where they attempt to recreate Roman style, but fail.

Here, there are pre-cut slices of gourmet, rectangular pizza.

In Rome, you walk up, tell them how much you want, and they cut you a rectangular hunk.

(Not the same thing.)

Then, after I waited 7 minutes, I got a little pushback from the pizza worker, just for choosing the piece I wanted.

There was a $14 slice of burrata and fresh tomato pie, that included a full ball of burrata, which looked like art, and would likely have been amazing.

(But my stomach didn’t want to eat a literal ball of cheese.)

When I got back to the hotel with my takeout slice, (one block away,) and opened it up, my heart sank.

The Eataly-pizza-attendant has smushed some wax paper down into the slice, and nearly all the cheese had come up onto the paper.

I spent a few minutes scraping the cheese, which helped a little, before I ate it in a dejected condition.

And I was not impressed.

The sauce was zingy, at least, and the crust was thick and crunchy, with a bit of olive oil to it, so I could only wonder what might have been?

The Art of the Personal Project: Stephen Voss 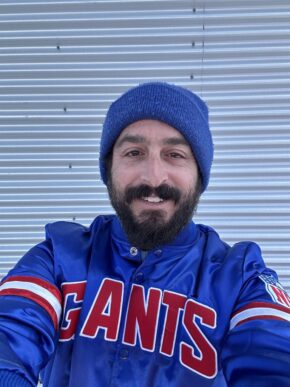 This Week in Photography: Signing Off 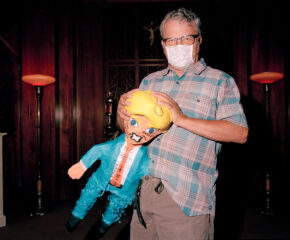 This Week in Photography: The Best Work I Saw at Filter Part 2

This Week in Photography: The Best Work I Saw at Filter