I’ve lived through three seasons in the last ten days, and it’s making me crazy.

It was 80+ degrees here in Taos until October 1st, when fall arrived in earnest, with yellow trees and cooler days. (Nothing too bad, but definitely not summer.)

Then we drove into Colorado at the beginning of this week, and some freezing rainstorms blew in at 7000 feet, where we were staying.

It was the worst of cold-wet-nasty-late-autumn for sure.

It snowed at the higher elevations, so on Tuesday, we drove over the Rockies, near 10,000 feet for two hours, and there was a blanket of thick snow covering everything.

Total winter in every way.

You’re not supposed to experience three seasons in ten days. That’s not the natural order of things.

And to top it off, I just got out of the car after a six hour ride, coming back across to the Western side of the Rockies yet again.

There were sections of slick road where the slightest misstep would have meant peril. We passed chunks of the landscape that had been ripped through by wildfire in June, and already green things had grown up in between.

What I’m saying is, I’m in one of those mind-spaces where I’m a bit bleary, or punch drunk. I’d be willing to consider almost any strange idea with an open mind, because I’m a tad woozy.

Almost boozy.
You know what I mean?

I remember one time when I was jet-lagged, just back from Rome to NYC, and I got hired to scan an old, highly damaged piece of nitrate film. (The kind that could spontaneously combust.)

I’ve never before or since seen a negative as scratched up. It was more like a Seurat painting than any proper photograph. No sane, regular person would have attempted to retouch it.

But I wasn’t sane. I was jet-lagged.

So I started, (just to start,) and constantly moved around to different parts of the negative, in random ways, so that it didn’t seem to repetitive.

In honor of that woozy-brain moment, (and the fact that the film didn’t catch fire and kill me,) I’m going to consider another seemingly impossible idea: what if Evolution had played out in a completely different way?

What if human beings didn’t descend from apes? What if we’re not cousins with chimps, but rather evolved from a common bird ancestor?

What if human-bird hybrids were real, and the god-creatures we see in Mesopotamian relief sculptures were actual beings, rather than scary masks?

What the hell am I on about? Am I actually drunk, as opposed to metaphorically?

This week’s book, “Aunt Paloma Was A Pigeon: An Alternative Theory Of Evolution,” created by Alice Garret-Jones, turned up in the mail recently.

I’m glad it did, because this is one of my favorite books in a long time.

It’s strange and absurd and thoughtful and surprising. The book is exceedingly well done in every way, and as photography makes an eventual appearance, we’re going to consider it enough of a photo book to review here at the column.

What if we evolved from birds?

In New York City, (and likely elsewhere,) they call pigeons flying rats. People have concocted these metal-spike-impediments to prevent them from nesting in many places. (Have you seen them?)

But Ms. Garrett-Jones presents a parallel universe where things played out differently.

I must admit, I studied Biological Anthropology at Duke, as I needed to take two science classes, and they were reputedly the easiest.

That we were literally apes, all hairy and making chimp noises, is pretty fucking strange, when you think about it.

Is it that much weirder to imagine we were Bird-People?

Or what about Simon and Garfunkel?

“Coo-coo-ca-choo, Ms. Robinson?” Is that some coded shout out to our avian ancestors?

I’m being silly here, and in fairness, the book is serious about it’s charmingly funny conceit.

It has statistics about how male pigeons are better Dads than humans, and uses drawings, graphics and type-face to great effect. Ms. Garrett-Jones considers attention span, so the reading/looking pace is smart and snappy.

I think my favorite page, (though it’s hard to pick one,) is the side view comparison between a human arm and a bird wing. It’s printed on vellum, (one of several surfaces throughout,) and the similarities are so striking.

Is it any weirder than coming from monkeys?

That’s about all I’ve got for you this Thursday evening. (Yes, I’m writing at the last minute, by my standards.) I hope you have a great weekend, and that more books in my submission pile turn out to be this good.

If so, we’re all in for a treat this autumn.

To Purchase “Aunt Paloma Was A Pigeon: An Alternative Theory Of Evolution” click here 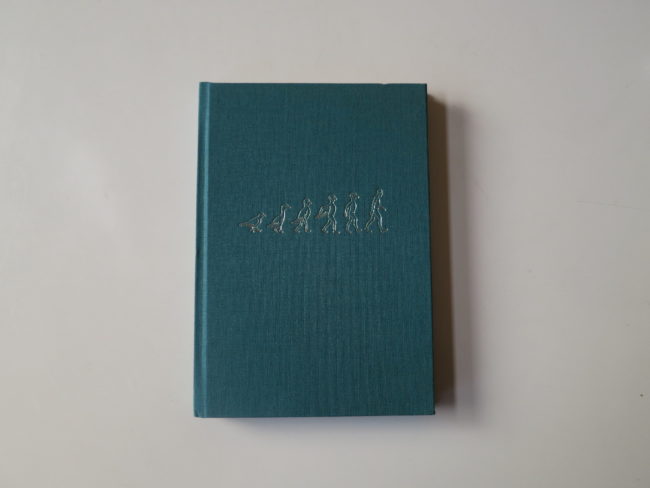 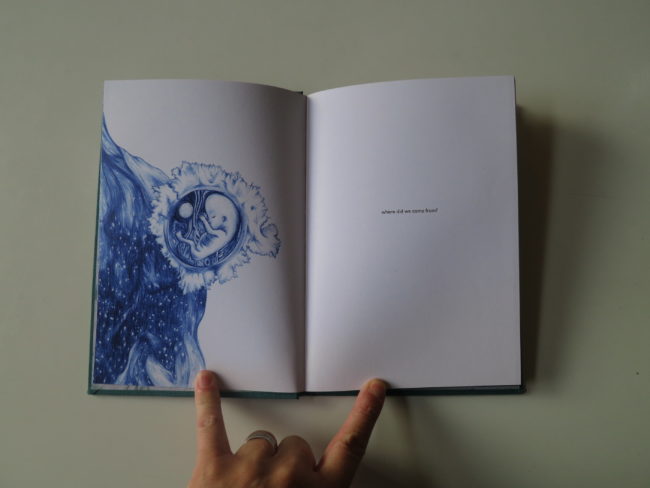 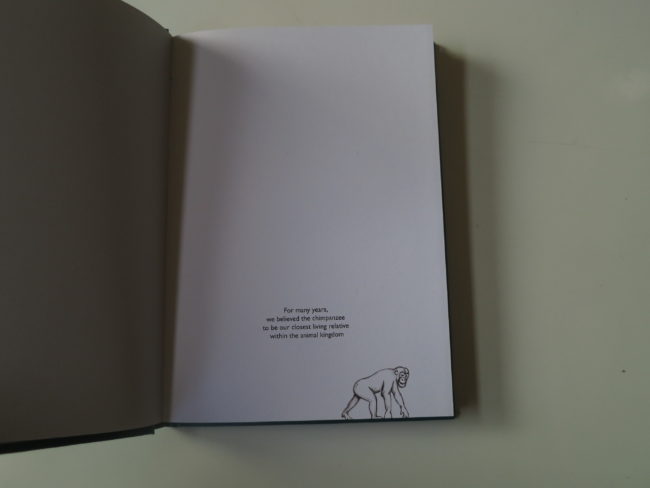 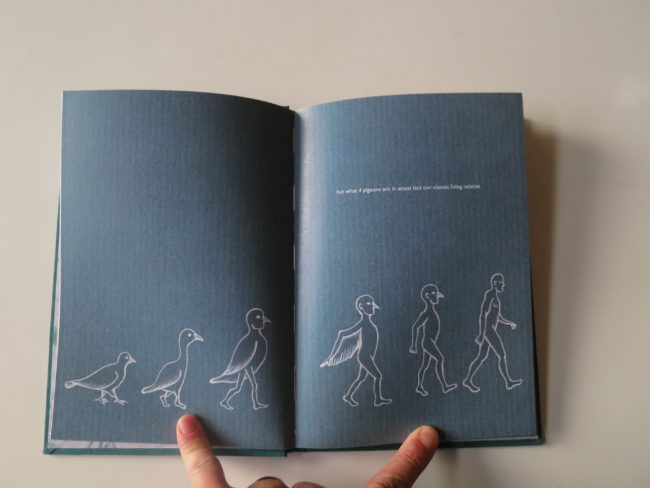 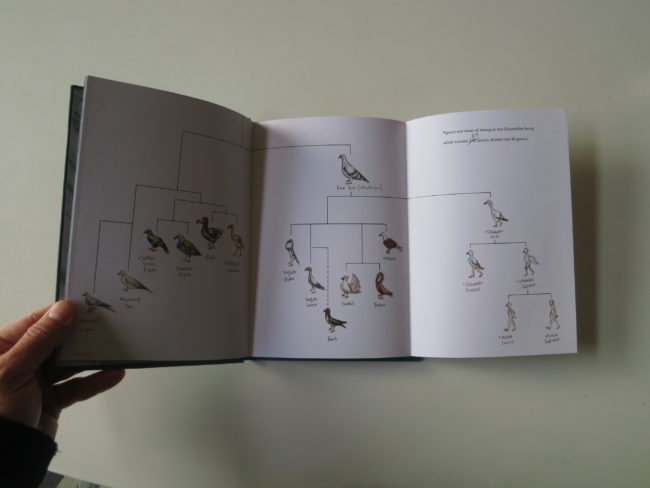 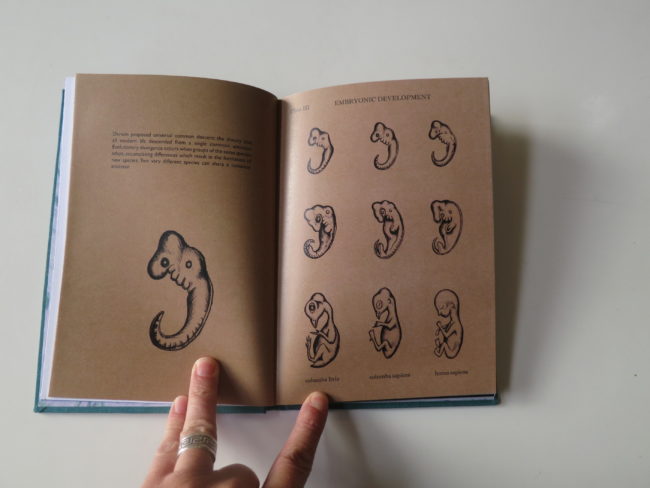 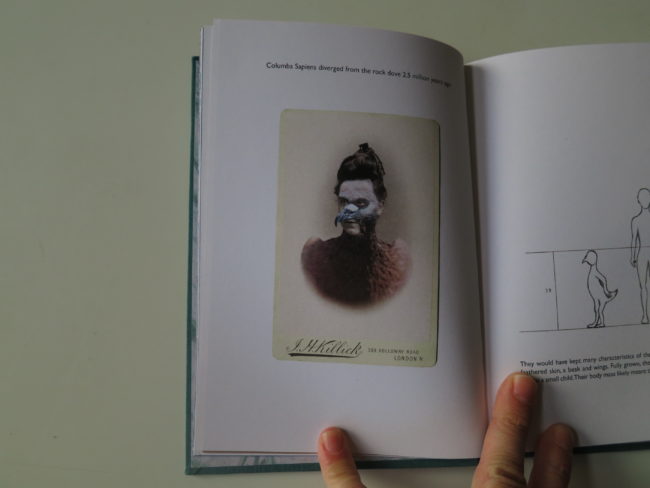 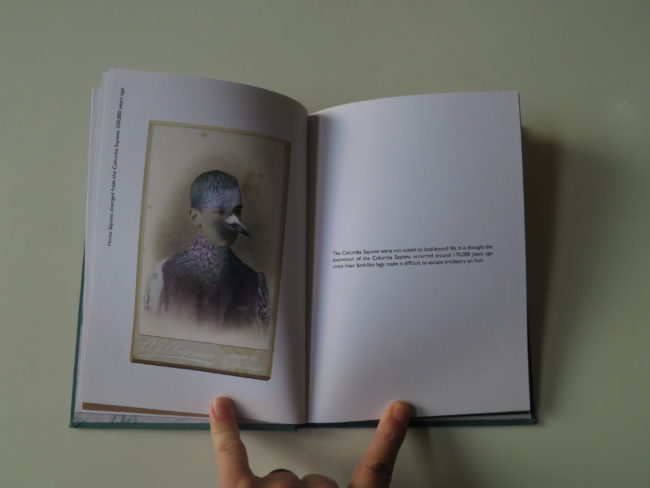 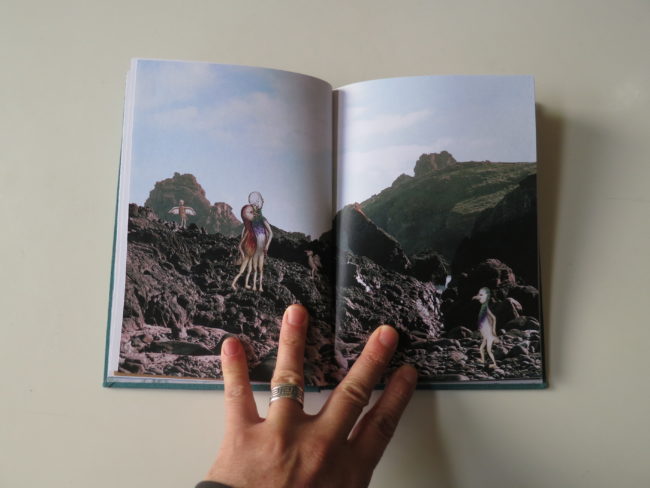 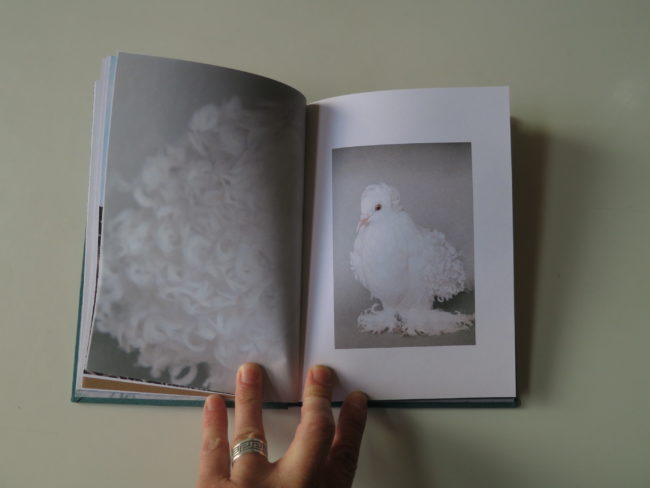 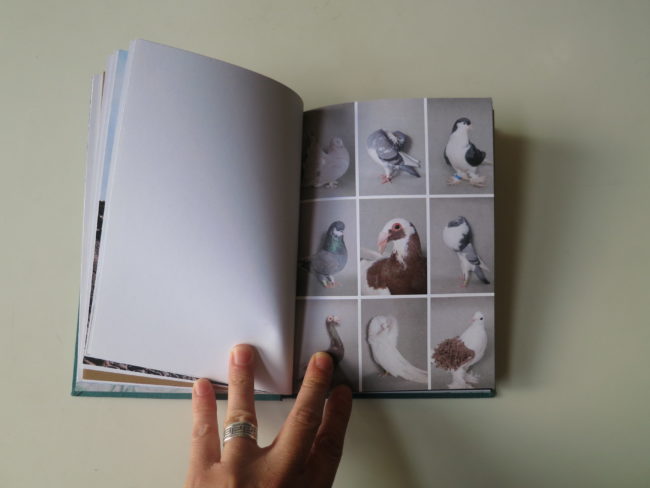 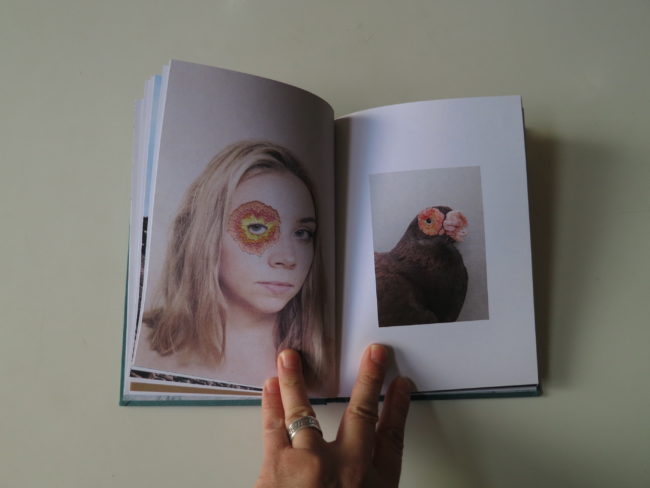 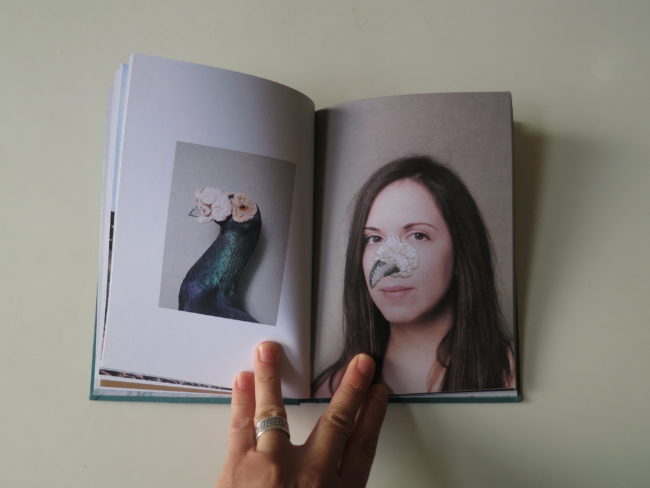 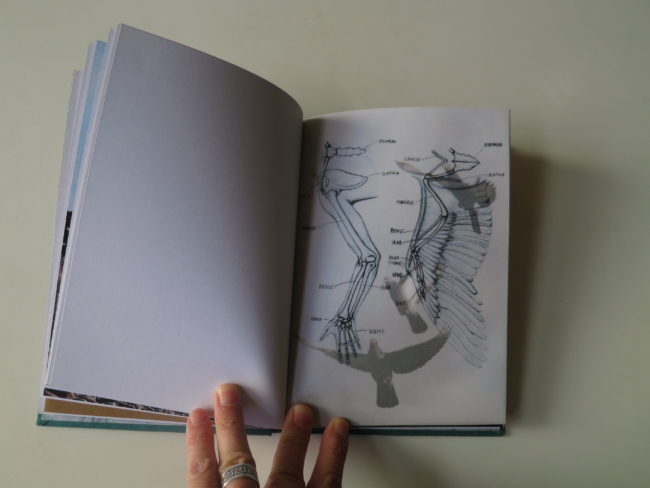 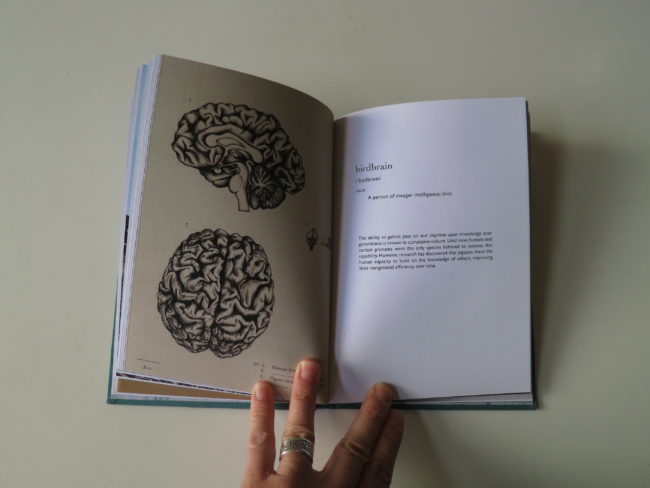 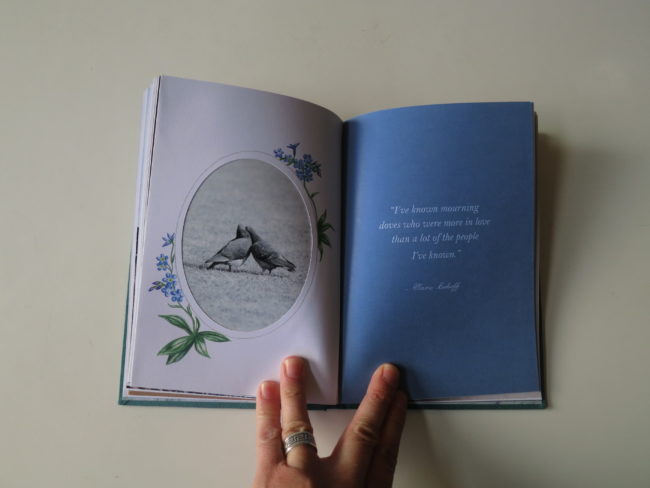 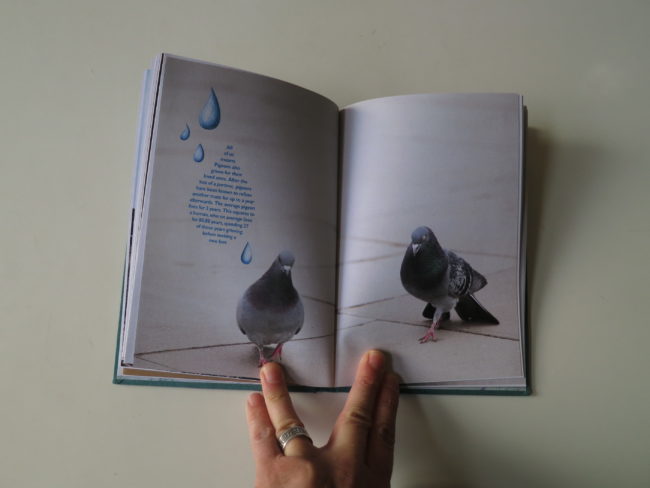 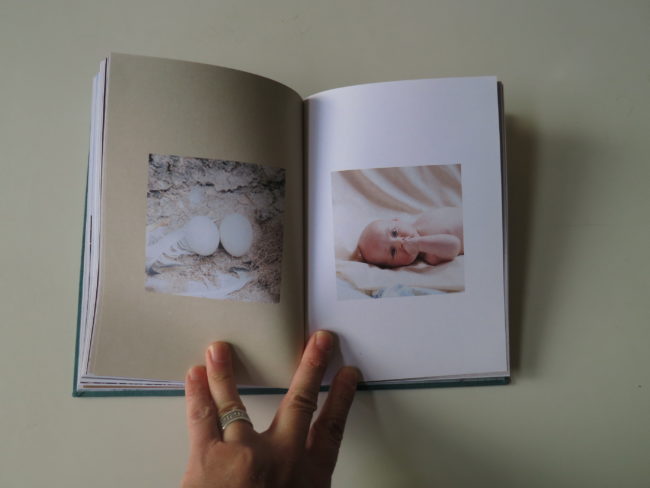 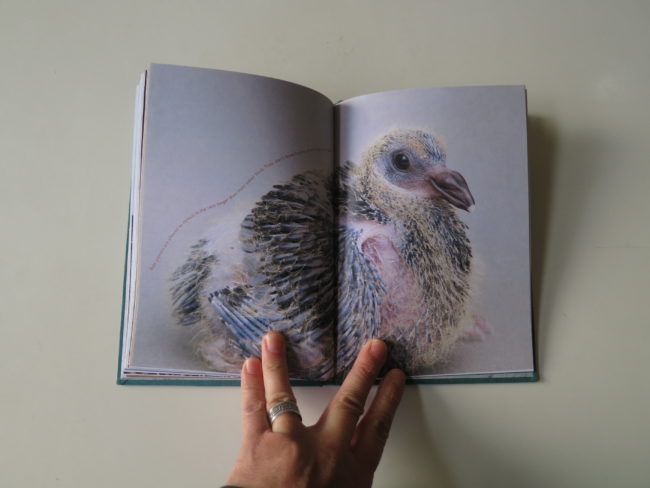 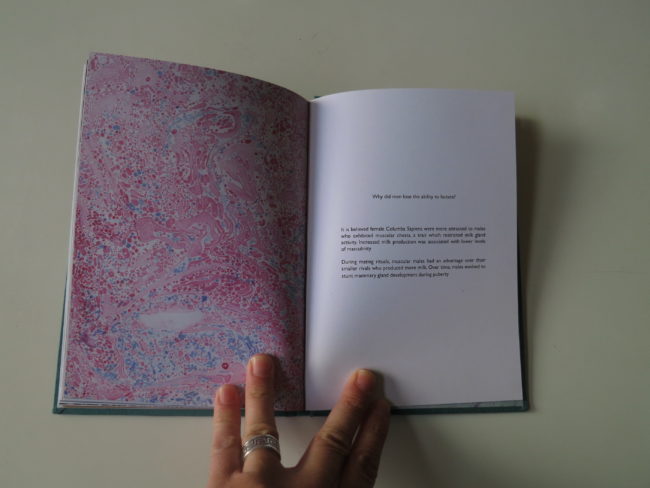 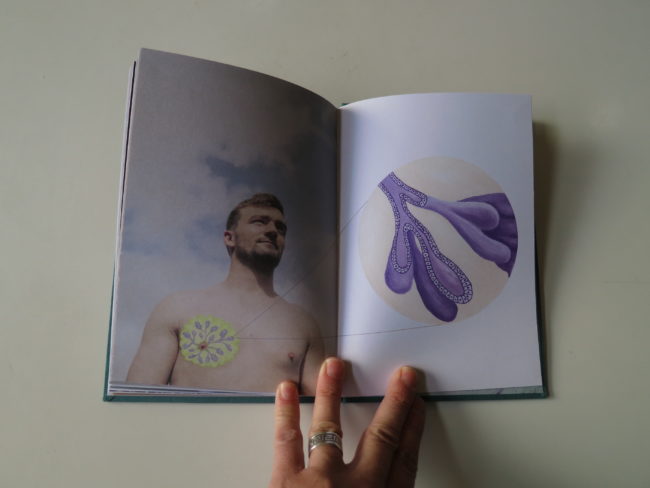 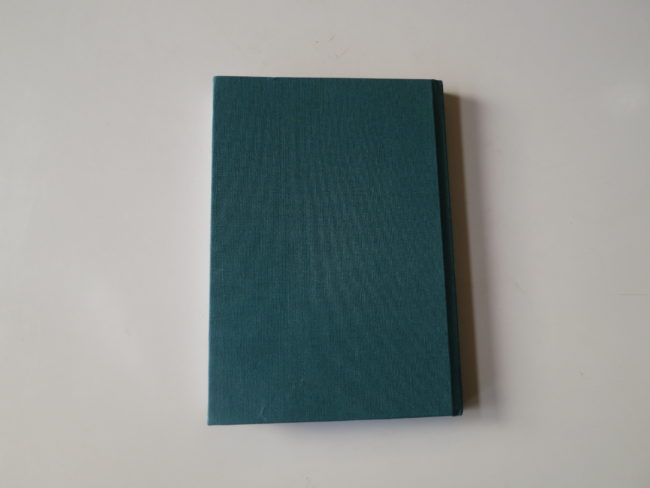