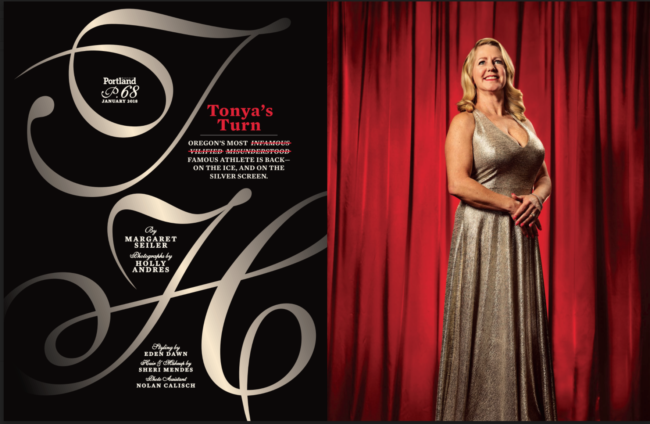 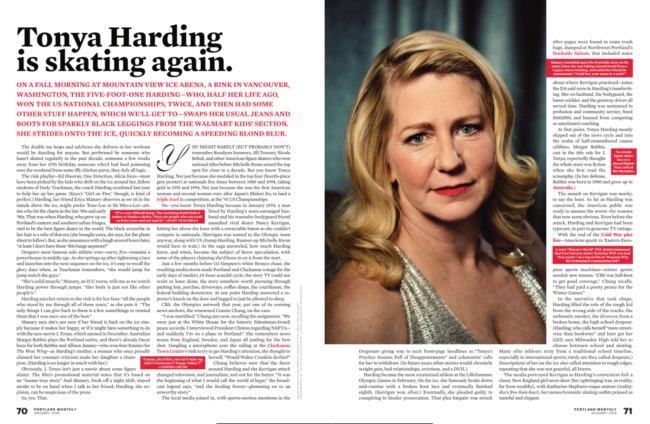 Heidi: How difficult was it to reach Tonya?
Margaret: There are a lot of fake sites and fan sites for Tonya Harding that claim to be official, but I found one that seemed like it might actually be connected to her, and had been emailing a contact I found there every few months for more than a year. I wanted to talk to her about growing up in Portland and her life today, not rehash “the incident.” I had read and seen plenty of interviews with her and knew her responses on that tended to sound kind of canned and repetitive. With the movie coming out at the end of 2017, we were finally cleared to set up an interview in October. Since we were all in such close proximity we made arrangements to watch her skate at her regular rink just over the river, with an interview and photo shoot to follow at a nearby country club.

Why did you choose  Holly?
We hired local talent Holly Andres, who has made a career out of telling complex emotional stories through her photography. We photographed Tonya Harding in the club members’ private wine room.

How did the styling direction unfold?
Her manager suggested our style editor, Eden Dawn, just take Tonya shopping at the mall for something to wear. But Eden and I wanted her to look like a movie star. I could remember seeing images of her on TV when I was a skating-obsessed kid (well before “the incident”), and it had often seemed like people had gone out of their way to get unflattering shots or to cast her as a certain type of character. There are people who view her as a villain, a hero, an antihero, a rebel, a criminal, washed-up—in Portland, where she’s from, a lot of people had had encounters with her and had their own varying views. We wanted to transcend all that and just show her looking really beautiful, befitting the red carpets she now finds herself on with the award attention for I, Tonya. Earlier that day our art director, Mike Novak, had gone to Eden’s house to jump-start her car, and just after I left the rink I got a message that it was dead again. “Can Tonya jump you?” I texted Eden. “She’s kind of a gear head.” I made a U-turn to rejoin Eden, and was just digging the jumper cables out of my car when Harding and her friend emerged from the rink. I was embarrassed to not know where my Volvo’s battery was or where the cables connected, so we definitely needed their help. Tonya had her friend pull up next to Eden, and then she leaned under her hood to put the clamps in place.

Tell us about Tonya on set as this is a coming out of sorts for her.
Hair and make-up shared some of Tonya’s experiences as a kid living in not-quite-Portland. Sheri could even talk hunting with her. (There also may have been a few cocktails involved.) Tonya said she felt like a movie star, just like Marilyn Monroe. We told her to look up pictures of Veronica Lake when she got home. Tonya really wanted to keep it, but it was most definitely not in our budget. She had to settle for keeping the heels she wore with it, which Eden had picked up at Target. In the end, even though it was an all-day event, the actual shooting had to happen very quickly due to time taken up by the interview, hair and makeup, and dead car batteries. We probably had about an hour of actual shooting time before we had to break down the set and be out of the country club.

Tonya told us we were the first media people she’d consented to talk to in a long time, and the end of the day was all tears and hugs and thanks for treating her with such kindness and respect. Since the movie came out, she’s done loads of other interviews inspiring plenty of similar stories, so maybe we were her gentle entrée back into the spotlight.