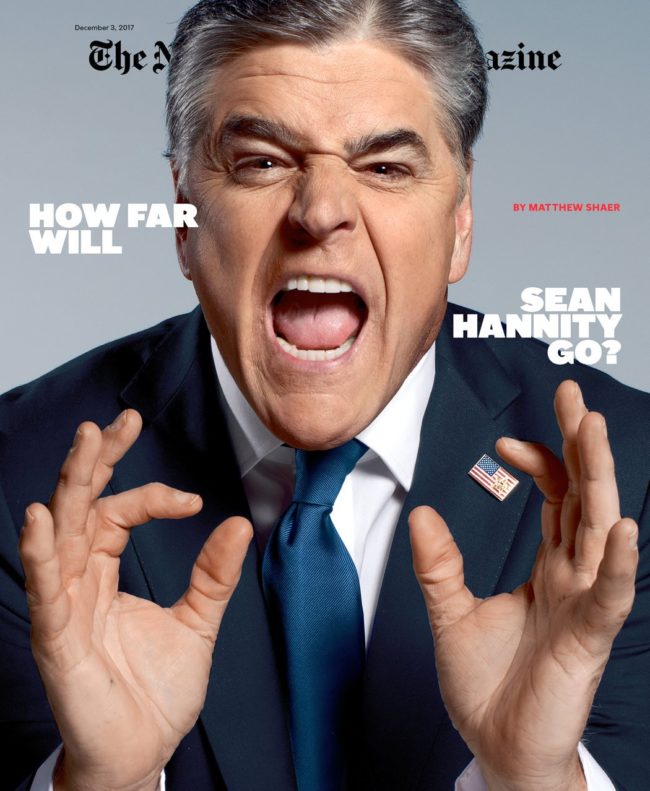 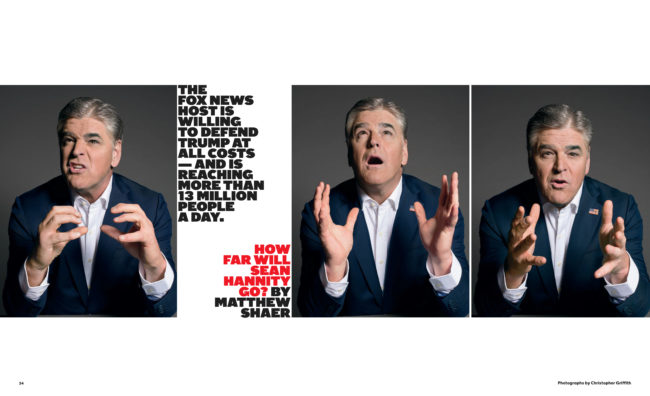 Heidi: You shot Sean Hannity for the cover of the NY Times magazine? Where did the shoot happen and what was the mood on set?
Christopher: We set up an entire studio on the set of the Hannity show at Fox News in midtown Manhattan. Since we were shooting for the NY TIMES there was initially the sense of entering the belly of the beast, but frankly that was our own bias as everyone was incredibly accommodating and pleasant.

I really had no idea what to expect. I have on occasion watched Hannity show with all its accouterments and became increasingly on edge with every minute that passed as we awaited Mr Hannity’s arrival. I found myself pacing all over his TV set that could easily be mistaken for The NFL Today. Sean finally burst into his set an hour late with a ready to go attitude that I must admit was a relief. His duality of frat boy charm and bravado gave me the sense it could change at the drop of a hat, but at that moment I felt I might get something decent out of him.

From the moment he sat down, he is off and running. We had built a table for Sean to ‘lean in’ on and lean in he did. I am sitting no more than 3 ft from him when he leans in and says ‘Right… so you want to get up in my grill’? Indeed I do and off we go. It is a rapid fire frenzy. At 3-4 frames per second bursts, I could barely keep up. I had told all involved on set that we were shooting untethered as the computer can’t keep up, when in truth I just did not want any preying eyes, nor opinions. 29 minutes and 700+ images later Sean walks out and turns to Kathy Ryan and Stacy Baker and says, ‘I have done this a lot over the past 30 years and this is the best guy I have ever worked with’

It rang as a sort of complement, not dissimilar to certain candidates on the campaign trail fishing for local endorsements.

Were you surprised by his reaction to the cover once the published story was released?
So, yeah. He clearly would appear to not have loved the cover; so much for compliments? He complained about it for days and there were multiple knocks on articles I turned up on-line. I found myself listening to his show 2 days after the cover had gone live and he mentioned the cover and the ‘liberal media bias’ 3 times in half an hour. Maybe it is me who is naive. I thought he might love it, because a lot of his followers did. I can understand that he might personally not love the image as it might not be an image that you care to live with forever, but this was business. He either does not understand his brand identity, or he understands it well and has used this cover as a means to attack the assumed liberal media bias and thus only strengthen his appeal to those ears that are listening.

What is interesting about this cover is the extended coverage it got in the press due to his complaints. Do you think he has a justified complaint, or was he scaling the exposure by complaining?
When I initially saw the image in question in my initial edit, I imagined it could be a front-runner for the cover as it personifies a significant part of Hannity’s media persona. The cover illustrates the power of a photograph when compared to motion. Hannity gesticulates this kind intensity to camera at some point of his program each and every week. These moments are fleeting and live solely in our memories.  The beauty of a photograph and maybe this cover image is that it captures an accurate depiction of his on-screen character and what is a major component of his viewer appeal.

My take on his reaction against the published images is that he is either super naive or he is kind of clever. I am leaning to the latter because he has got a bunch of liberal media bashing out of it. His reaction has been all about how he has been depicted as angry and that this is all part of the liberal media bias against conservatives. That said, I might be over thinking, it might just be vanity.

I’ve read that he feels he was misled. Once you sit for an editorial image, the subject takes part in the creation of the image, it’s a collaborative process.
All things said and done, and whatever your opinion is of Sean Hannity, he was in no way manipulated or misled by anyone. He gave a performance and a very good one at that. As Director of Photography Kathy Ryan has said ‘We have never seen anyone so animated during a photo shoot’. Maybe it was my brilliance as a photographer in making him so comfortable, but sadly I think not. I actually think it had little to do with me. He knew exactly what he was up against and what he was giving to us as a portrayal of his character. If he wanted to play it safe, he would have done so. He gave me (us) everything… and I for one think he did on purpose. He might not like it, but it is totally accurate. And he knows it.