Pricing & Negotiating: Stills and Video for a Pharmaceutical Company

Licensing: Unlimited use (excluding OOH) of up to three images for two years

Location: A studio in the Northeast

Agency: Small, based in the Northeast 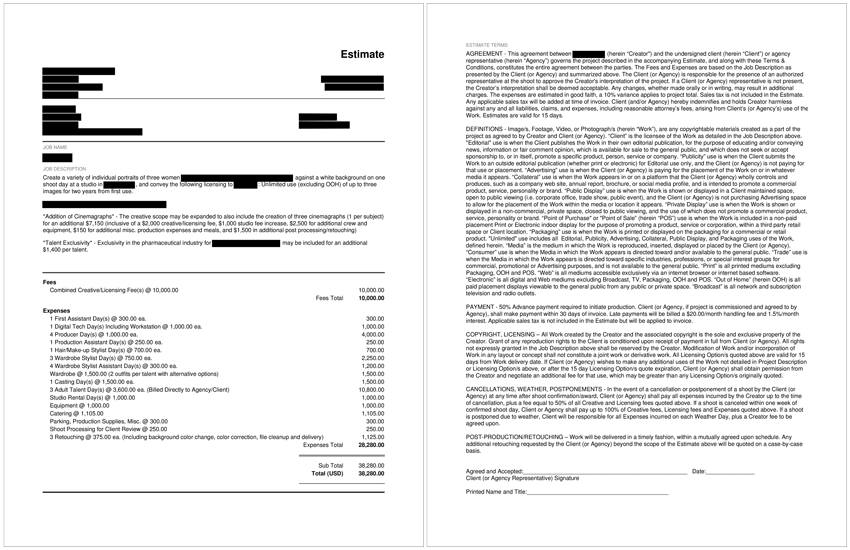 The concept was straightforward: the agency/client hoped to photograph three women of a specific demographic individually against a white background. The agency was redesigning a website for a new drug the pharmaceutical company was manufacturing, and while this would be the main use for the images, they also had plans to run a few consumer-facing print ads over the course of two years. Additionally, they were considering the possibility of creating cinemagraphs of each woman, however, the exact creative concept for this was still being developed.

While the simple concept put strong downward pressure on the fee, their requested usage drove it up. I decided to price the first image at $6,000 and the second and third images at $2,000 each as it was clear based on the creative brief that one of the women would be the “hero” talent and her portrait would be used much more heavily than the others. $10,000 felt a bit low at first, but considering the client’s intended use, the straightforward nature of the project, and the fact that there were a handful of other known local photographers in the mix for the project, I felt it was in the right spot.

As for the cinemagraphs, the agency asked to see ballpark costs to add them later if desired, so we noted an optional creative/licensing fee of $2,000 in the job description section of the estimate (we also noted the expenses, which I’ll detail later). I based this on $1,000 for the first, and $500 each for the second and third cinemagraphs, which would live on their website if they chose to move forward with this option.

Assistant and Digital Tech: The photographer was comfortable with just one assistant, and we included a digital tech for $500 while including another $500 for their workstation.

Producer and Production Assistant: This included two prep days, one shoot day, and one wrap day for a producer, and they’d bring along an assistant for the shoot day to be an extra set of hands throughout the production.

Hair/Makeup and Wardrobe Stylists: We just needed one hair/makeup stylist since there were only three women, and we’d have plenty of time to get each one ready on the shoot day. As for wardrobe, I included two prep days and one shoot day for the wardrobe stylist, and two prep days, one shoot day and one wrap/return day for their assistant. The agency anticipated that we’d shoot each of the three women in two different outfits, so I included $250 per outfit for six total non-returnable outfits.

Casting and Talent: This particular market had relatively affordable casting and talent rates, and we included one live casting day and a talent rate that would easily attract a wide pool of talent to choose from. The rate was a bit higher than I’d typically include for this market/usage, however, we wanted to provide the talent with an incentive for their likeness to be used to promote a drug while portraying them as a person who may be afflicted with a certain sensitive illness. Additionally, the client requested an optional rate if they were to acquire exclusivity on the talent for this within the pharmaceutical industry, and we noted the appropriate increase in the rate, which was based on a conversation I had with our casting director.

Studio Rental and Equipment: We included one day for a local studio, and added an equipment fee to either use the photographer’s personal equipment or cover rentals from the studio or local rental houses if needed. We also detailed that if they wanted to create cinemagraphs, that it would likely require an increase in the studio expense to afford a better-equipped space for capturing video (mainly appropriate power/electric access). Additionally, if video for the cinemagraphs were to be captured, we would need to light the entire set with continuous lights as opposed to strobes, so we detailed a price increase to include a grip, gaffer, grip truck and plenty of lighting in order to achieve this.

Catering: There would be 17 people on the set, and I included $65 per person for breakfast and lunch.

Parking, Production Supplies, Misc.: This just covered $100 in parking, $100 in supplies such as tables/chairs, and $100 for any unforeseeable expenses that might have presented themselves during the shoot.

Shoot Processing for Client Review and Retouching: We included $250 for the photographer to go through all of the shots and do a basic once-over in order to present a web gallery of options to the agency. Additionally, we included $375 per image to cover the time it would take a retoucher to process the images and swap background colors, which is something the agency mentioned would be a possibility as they developed new brand colors for the client.

This of course also impacted our expenses. We added additional wardrobe along with the talent rates requested, adjusted for catering, misc. expenses, and retouching while adding a hair/makeup stylist assistant to help move the shoot along since we had one extra talent to prep. We increased the studio as well to accommodate the equipment, crew size, and electrical access needed for the video, and we incorporated the grip, gaffer, and additional lighting equipment into a single line item. We also noted a TBD overtime rate, as we were now proposing to shoot four talent, each in two different outfits, with stills and video for each. While that would take a while, I was still confident we could make that work in a 10-hour shoot day, but I wanted to note the rate ahead of time. 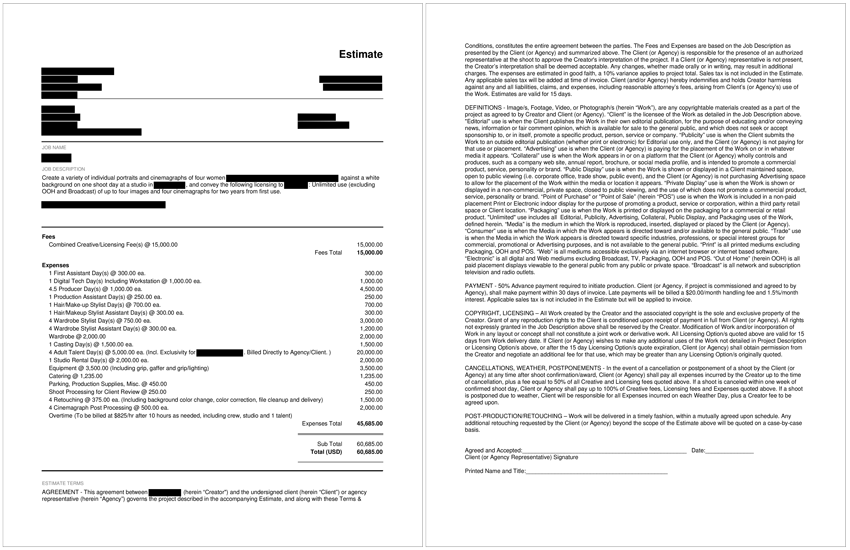 Feedback: Again, the estimate was well received, however, they decided to revert back to three talent, instead of four. Also, at this point, the cinemagraphs became better defined as we started to inquire more about the creative concept. The success of a cinemagraph typically relies on some sort of environmental element moving or changing in some way, but since we were just capturing a few women in front of a white background, our options were pretty limited. After a creative call with the agency, it turned out that they just hoped to capture short videos of the women making subtle changes to their expression and slightly moving their bodies (often referred to as “video portraits”), and we were told that the agency would handle the video editing.

We made a few tweaks to our estimate, and submitted the following: 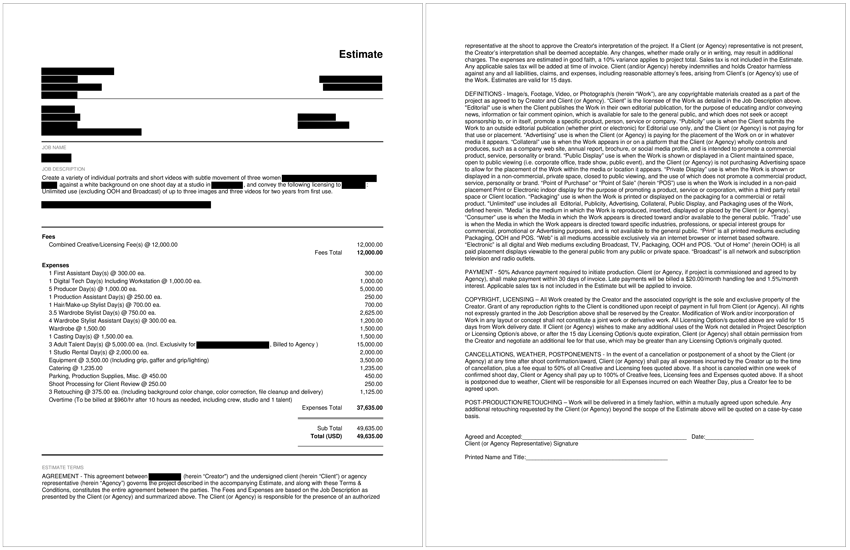 Results: The photographer was awarded the job, and we coordinated the production.