Shoot Concept: Portraits of a professional athlete against a solid background captured on location alongside a video production

Licensing: Advertising and Collateral use (excluding out-of-home and broadcast) of up to two images for one year

Location: A stadium in Los Angeles

Agency: Medium in size, based in the Midwest 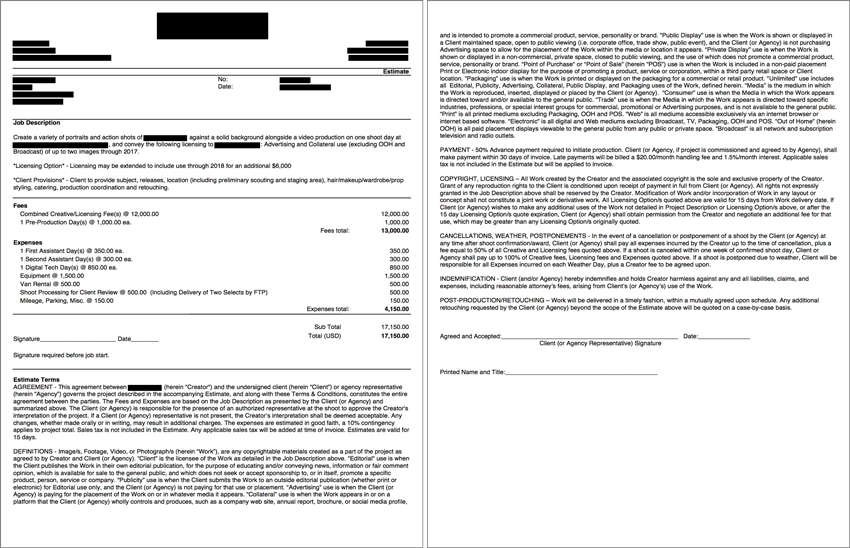 Creative/Licensing: The agency was in pre-production for a video shoot featuring a professional athlete and they hoped to capture portraits of the athlete alongside that project on the same shoot day. Given the availability of the athlete and the busy shoot day, the agency anticipated that the photographer would have about 30-45 minutes to capture two types of portraits; one posed shot of the athlete holding the product, and another shot of the athlete in action with various equipment. Other than the time constraint, the portraits were rather straightforward, especially considering the agency planned to provide the location, styling and general production coordination through the video team.

Based on the layouts/comps we received, it was clear that they intended to use the images primarily for in-store displays and other collateral pieces, however the requested licensing included use for all advertising and collateral purposes for a year. Based on this, I valued the first image at $8,000 and the second image at $4,000, totaling $12,000. They also asked for an option to extend the licensing to include an additional year, which I priced at 50% of the 1-year rate.

Pre-Production Day: I included one day for the photographer to line up his crew and correspond with the agency and video team to prepare for the shoot day. It’s often expected that a photograhper will bring on a producer when shooting alongside a video team to handle correspondence with the client, agency and video production team, but for this project it was clear that the art buyer from the agency would be filling this role.

Assistants: I included two assistants for the shoot day, both of which would help with lighting and grip equipment while also lending a hand with any last minute needs during the short window of shooting time.

Digital Tech: The digital tech the photographer works with charges $500/day plus $350 for a mobile laptop workstation, which would help the agency/client see the results as they were being shot. We also anticipated the athlete’s publicist would be on site as well, since we knew they’d want to approve the images being captured.

Equipment: This included about $800 for camera bodies and lenses, and $700 for grip, lighting and expendables.

Van Rental: One of the shots required the athlete to jump in the air and land on a large pad. The photographer needed a van to transport this pad (which he already owned) to the shoot, along with his equipment.

Shoot Processing for Client Review: This accounts for the photographer’s time to edit the images and deliver a web gallery for the agency to choose from, as well as the delivery of their two selects. The agency was to provide any retouching, so we didn’t include any additional post processing fees.

Mileage, Parking, and Miscellaneous: This covered parking at the stadium and miscellaneous expenses throughout the shoot day.

Results: The photographer was awarded the project, and the client came back a few months later with another similar project featuring a different athlete.