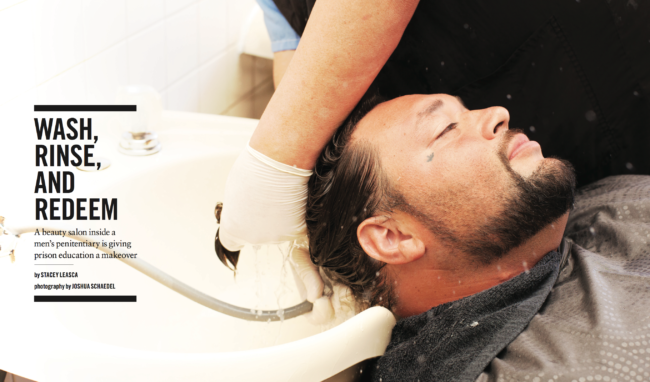 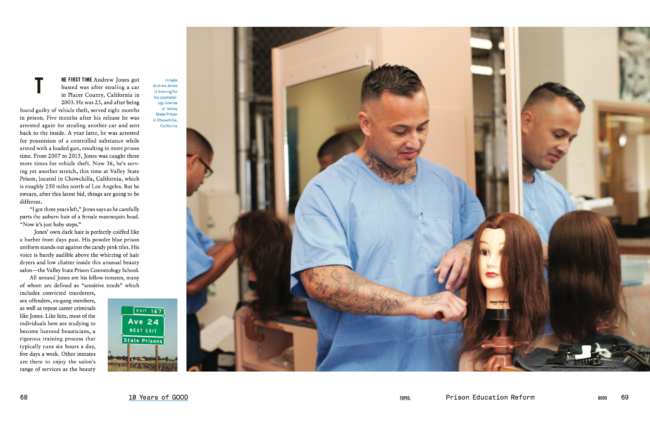 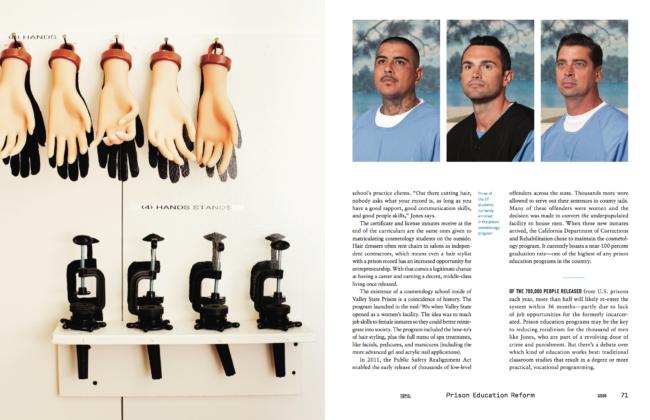 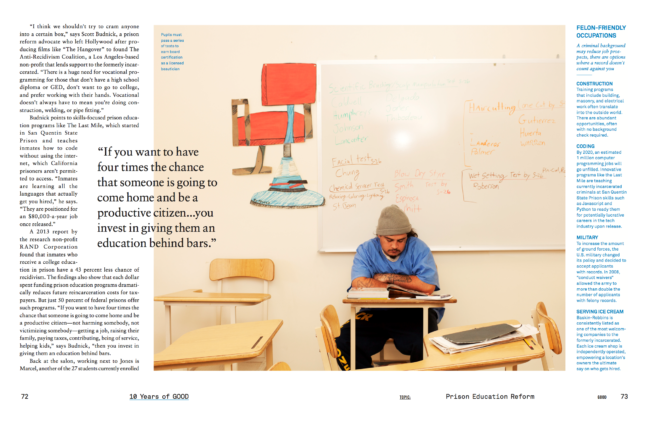 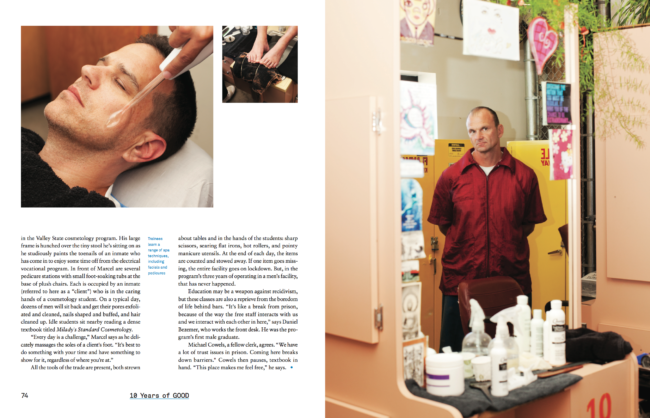 Heidi: What type of direction did you get from the magazine?
Josh: Art Director Tyler Hoehne, the writer Stacey Leasca and myself talked a little about the direction of the piece and the type of emotion that was needed conceptually. Luckily, I have worked with Tyler on a few assignments before; he mentioned certain pictures that I had made in the past for Good, and how to pull some of those moments into this project. The communication was great so I had a pretty good idea what I was after prior to arriving on site.

Did you pitch them this story or was it assigned?
No the assignment was based on the writer Stacey Leasca’s story that she pitched to the magazine after doing a related story on the female prison that is located directly across the street from the men’s facility. Stacey wrote, “The existence of a cosmetology school inside of Valley State Prison is a coincidence of history. The program launched in the mid-‘90s when Valley State opened as a women’s facility. … In 2011, the Public Safety Realignment Act enabled the early release of thousands of low-level offenders across the state. Many of these offenders were women and the decision was made to convert the under populated facility to house men. When these inmates arrived, the California Department of corrections and Rehabilitation chose to maintain the cosmetology program. It currently boasts a near-100 percent graduation rate—one of the highest of any prison education program in the country.”

Did you send promos to the art/photo director?  How did you meet Tyler and how did your creative relationship develop?
No, Tyler came to my studio in Pasadena to hang out with my studio mate and business partner Ben Sanders. We ended up talked a little bit about our photo-illustration business “Those People” and I think he eventually hired us to shoot a food related concept for Good Magazine. Tyler was on set that entire shoot and played with props and lights with us. We really had fun and hit it off. A couple of months later he reached out and said he had a cool assignment that he thought my documentary style would fit for. I had such a great experience on that next assignment and myself and everyone involved just hit it off. After that, Tyler just continued to send me on really interesting assignments.

How many days were you at the prison?
I just went in for a single day. Stacey and myself were allowed in after the inmates were settled in for the day at the Cosmetology school. We went through a normal day of their routine and then just before their day was over we had to go back. In all, I think we spent about five hours with the guys.

Were you able to interact with the inmates without supervision?
There was a Lieutenant that escorted us around but for the most part but once we were in the class we were allowed to walk around the salon pretty freely. If I am correct, to be in this particular program most of the men are exceptionally well behaved. From my perspective, everyone that I met in the cosmetology school really wanted to be there and I never once felt like I wasn’t in a salon.

Were you able to connect enough with the inmates to ask why they pursued this?
I definitely was able to connect with some of them. I have even received a few letters from a couple of the guys that I met. I never really asked them that specific question but for the most part the guys that I talked to said that their ambitions were to take the skills that they learned while they were in this program and find a job. One guys told me, “ It doesn’t matter what you did as long as you make a proper cut.” Some of the guys told me that they had dreams of opening their own Barbershops and Salons when they got out. One gentleman told me that his biggest goal was to get out and cut his daughter’s hair, that one really stuck with me the most.

At any time on this project did your mind ever wander to thinking about why crimes they committed?
During the time I was there I definitely thought about all the stupid things I have done in the past and how lucky I wasn’t on the other side of the lens. I was cornered by a guy on the street, and in defense, I got in a stupid fight near my apartment in Hollywood. I beat the guy so bad I thought I might have well,  don’t even want to say. I waited with bloody hands for hours for the police to come get me but they never did. I went down stairs and it was like nothing had happened. No cars, no cops, no guy, nothing. It was a big wake up call, I got help for my issues, and it changed the entire course of my life for the positive. I have only told a few close friends that story but it was essential for me while shooting this assignment. I went into the assignment knowing I was no better than them and I think they somehow knew that.

I know you are a recent Art Center Grad and have had success with your personal work as well, tell us about your publishing company.
Well, the publishing company, The Fulcrum Press, grew out of my relationship with my business partner Rebecca King. I met Rebecca King after she moved back to LA after graduating from SVA in New York. We hit it off pretty quickly and we started working on a series of publications for a few art shows that I had. It has really become a labor of love, not a day goes by that I don’t think about our publishing company and all the decisions that we are making.

I really love it and love the people that we are working with. We are luck enough to have some really good friends over at The Ice Plant who has really helped us out a lot. Right now, we are pretty excited about the two publications that we are working on and are trying to finish up before the end of 2016.We are not really rushing anything and are just taking our time and enjoying the process of collaborating with our friends, making cool publications that we emotionally and conceptually are attached to. I’m  really fortunate to have such an amazing, like-minded business partner in Rebecca King.

What has been the biggest surprise for you after graduating in terms of commercializing your images?
Ha-ha, that I know nothing. You can only learn so much in school and no matter how much you work on your craft the only way to see what works for you is just trying different things outside your comfort zone. For me the biggest surprise that I learned is how much I really love collaborating with so many different kinds of people. It may sound cheesy but it’s true; it is all about the people that you work with that determines how your day is going to go and how good the images are going to turn out. Good collaborations makes photography so enjoyable. In addition to that, how much you need a good set of friends who will help you along your way. Everyone needs help and having other good friends in the photo industry is such a valuable asset.When a client asks you a question and you can turn to a friend who has been there and they can give you sound advice that makes all the difference in the world. I was really surprised by how many unexpected people really helped me out and supported me and it has motivated me to do the same and pay it forward.

Was there anything that you wish your education prepared you for?
This is hard question for me because I really have no complaints now that I have some distance and perspective. I think every school is different and they have their strengths and weaknesses. I felt like I got a great education at Art Center. I was lucky because I had to paint houses for extra money all the way through school and because of that most of my teachers went out of their way to help me. I still maintain very close relationships with some really great teachers who I still turn to for advice. It’s funny, now that I am teacher, I am asking all of them for teaching advice.

I personally don’t think you are really ever prepared enough till you have to make real life decisions. Balancing life and work and art is difficult after school and getting over that hump and transitioning into a professional practice from an educational practice is tough and you have to learn to forgive yourself for making mistakes. It takes time, which seems like is different for everyone. It’s just one of those things where you have to find your own way of doing things that makes you happy and just don’t stop making pictures. How you act and how you treat people while you are in school will dictate most of your young professional life. It is kind of silly but I wish someone had said that to me.

I think I got really fortunate; I was lucky to have some really great teachers/ mentors while I was going there. I made a lot of really good life-long friends and I don’t know where I would be without the relationships that I made while I was in school. To be honest, nearly every opportunity that has come my way has been a direct connection through some friendship that I made while I was in school. Anything I didn’t learn from my teachers I learned from my friends. Hindsight is always 20/20 but I really can’t complain, I am really happy these days.

To see some more of Josh’s work,
NowSpace is presenting YIELD, a joint exhibition by Josh Schaedel + Aaron Farley  both are artist in residence there.

Pricing & Negotiating: Still Life for Print and Out of Home Advertising