A Visit To The Getty

The phone beeped in the middle of the night. A text. Must have been Dad, I thought, shaking off my dreams. He wakes up at 3:30 in the morning. He must have sent me good wishes on the trip.

Jesus Christ, Dad. It’s the middle of the night. Give me a f-cking break.

I swatted at the phone to shut it up, and went back to bed. I was due up super-early to head to California, so I was none-too-pleased to have my anxiety-ridden sleep interrupted any further.

When the phone beeped again, this time as an alarm clock, I rolled out of bed at 5. My eyes refused to open, like a recalcitrant clamshell. I looked at my messages, mentally composing a text to Dad that would have included some impolite language.

Except it wasn’t Dad. It was Southwest airlines. They’d texted me at 3:55 am to say my flight had been cancelled.

I had a serious cortisol drop, and tried to reschedule through the website, but that was useless. So before you know it, I was talking to a grumpy customer service rep, who’d been working straight through the night, trying to figure out how to salvage my trip.

(You try being civil and polite under such circumstances.)

When all was said and done, I made it to LA. But I routed through Vegas, and lost a bunch of time. Time I meant to spend at the J. Paul Getty Museum, looking at art, so I could report back to you.

They’d graciously set up a few meetings on my behalf, to have some of the curators show me work, as their photo exhibitions were changing over. They had to move things around to accommodate, and I had to apologize for the airline shenanigans. No harm, no foul, I suppose.

I only mention the drama because I’d been bragging to my wife the night before about how good I’d gotten at avoiding and managing stress. I’m a road warrior, I said, or something like that.

By the time I turned up at the museum, improperly dressed for the 85 degree day, I was salty and grouchy and spent. Not much good to the world, unfortunately. Much less as a journalist who was meant to at least APPEAR intelligent.

Luckily, for those of you who don’t know, the Getty Center is set on a hilltop overlooking all of Los Angeles to the East, and the Pacific Ocean to the West. It is as beautiful a setting as you are likely to find, for a museum, anywhere.

So I sat down for a few minutes, when I finally arrived. Caught my breath. Took in some sun. Breathed deeply. And I felt better.
Who wouldn’t?

My first move was to go to see Peter Paul Rubens’ gigantic tapestries in an exhibition that had just opened. Apparently, in the Baroque period, some Spanish royalty commissioned him to design 20 foot wide tapestries that depicted the victory of the Eucharist. The dominance of Catholicism.

Spain controlled the Southern Netherlands, which is now Belgium, and wanted to take over Holland, which was Protestant. The artist first made a series of phenomenal oil paintings, which were also displayed, and then had those pieces transcribed into cloth, on an enormous scale, by other artisans.

As near as I could tell, it was straight-up propaganda. (Nothing new, if you’ve seen European art before.) The Catholic Church was the prevailing power structure, and had plenty of funds, so it was a solid patron, albeit one with a clear agenda.

I looked at the work for a while, in the dark room, and then stepped outside and looked at the Pacific Ocean. I repeated the pattern two more times. In all my years of looking at art, visiting museums, and traveling around, I’ve never done anything like that before.

The fresh air helped me suss out my thoughts. The paintings were taut and packed with energy. Once translated into another medium as tapestries though, they lost the viscerality of the originals. What was forfeited in emotive power was more than likely gained with the impressive scale, as far as delivering the message. Fear us. We are coming to convert your souls. The Eucharist bows before no man. (Or something like that.)

Soon enough, I found myself in the innards of the museum, still wearing my puffy vest in the 85 degree weather. At least it will be freezing in there, I thought, so I’ll be glad to have it. This place, unlike every other museum I’ve visited, was not chilled to perfection, though.

So I ended up sweating as the meeting got started.

I took the vest off, allowed the air-con to do its job, and began to parse what was going on before me. Which I will report to you, finally, now…

The Getty had arranged for me to meet Nancy Perloff, a curator at the Getty Research Institute, who was putting on a large exhibition about World War I, and the propaganda imagery that flooded the Continent. (In honor of the Centennial.) She was interested in the visual language that was used to depict the War, but also the manner in which imagery was manipulated to present one’s enemies in unflattering ways.

The exhibit, “World War I: War of Images, Images of War,” has since opened, so you ought to go see it. I did not have the opportunity, I’m afraid. We were joined in our conversation by Mazie Harris, a curator from the photography department.

Ms. Perloff presented us with a 6-photo panel piece made in London in WWI. She said it was the only photography that was included in the exhibit, so they carted it over to show me. Very decent of them.

The images were made of a German dirigible that hung over London, in 1916, lobbing bombs down below. It seemed like an early version of a drone, where superior technology enabled one side to pummel another from a safe distance.

But those Brits were crafty, so the series showed the floating beast lit up from below by spotlights. And then it was shot down, probably by airplanes, though that was not entirely clear in the pictures.

The first two were straight black and white, then a third was more of a sepia color. The last three pictures, while the wreck descended in flames, were rendered in red. Totally expressionistic.

We discussed the photographer, H. Scott Orr, of whom I’d never heard. Had he made money off the images by releasing post cards? Ms. Harris showed us some provenance work she’d done, when other such images came on the market. We discussed the degree of research that goes into the job.

Curators are often seen as glamorous these days. Practically art stars, in the public’s opinion. But I must say, whenever I spend quality time, I see them as scholars and historians. Right there in LA, talking about history, war, culture, and research, it was clear that I was dealing with people who’d devoted their lives to discovery.

Were the flaming blimp pictures propaganda, I was asked? I thought not, because H. Scott Orr was just making his work; doing his thing. If he’d been commissioned, like Rubens, and supplied with a message beforehand, I would have said yes.

We wondered how the colors were achieved? As the resident photographer in the room, I suggested toning. I’d seen a heap of hand-colored Russian images at FOAM in 2013, and they look very different.

After a while, our discussion broke up, and Ms. Perloff and Ms. Harris moved along. Amanda Maddox, who’d been quietly doing her work, right there in the room the whole time, looked up from her notes and introduced herself. She’s also a photography curator, and was working on the new Josef Koudelka exhibition that has since opened.

She’d spent the better part of six years on the project, which was meant to be the first major, complete retrospective of the artist’s career. They’d given over their entire photography exhibition space for the show, which was also a first.

Ms. Maddox showed me “The Wall,” an accordion-fold book that Mr. Koudelka had made for “This Place,” the Israeli photo project we’ve discussed thrice in my book review column. Apparently, Mr. Koudelka’s solution to being invited was to focus on the wall dividing Israel from the presumptive Palestine, and then make only two copies of the book.

As they stretched the book wide, which would ultimately reach nearly 40′, I was reminded of that classic SoCal accordion-fold book, “Every Building on the Sunset Strip,” by the ultimate LA guy, Ed Ruscha.

At that moment, in walked Virginia Heckert, the chief photo curator at the Getty. I pointed out the comparison, and she mentioned the book review I wrote where I called “bullshit” on Mr. Ruscha for claiming he’d never heard of Stephen Shore, Robert Adams, Lewis Baltz, or Nicholas Nixon. (FYI, Mr. Baltz has since passed away. RIP.)

I asked Ms. Maddox why Koudelka? If she was going to devote 6 year of her life to something like this, marrying her passion, work ethic, research skills, and all the other component parts, why him?

There must be a reason.

She replied that Mr. Koudelka had demonstrated a level of commitment she found fascinating. After he had to leave Prague for publishing anonymous photographs following the Soviet invasion, he based himself in London. But he soon began photographing the Gypsy, or Roma communities, for which he became famous.

For years, she told me, he was essentially homeless. Following the human migration, sleeping outside, where he could. He’d head back to London for the winters only, as it was too extreme to live outdoors. He’d given his life for his art, Ms. Maddox said, and so she was devoting a chunk of her own to honor that.

She also showed me some mini-accordion-fold books that he makes, by hand, and keeps in his back pocket. They’re his maquettes for book ideas, though they look as much like a Hello Kitty version of a photo book: adorable, and the kind of thing you want to touch. (They didn’t let me, though. Touch them.)

After a couple of hours, I let everyone get back to their jobs, and set out to do more of mine, which meant wandering around the museum until it closed, looking at art. Chatting up the people who worked there. Having a good time.

Honestly, the staff I encountered at the Getty were just so nice. And helpful. The folks at the info desk, the security guards, the coat check lady, the curators, media contacts. Everyone. I’m sure it takes a ridiculous sum of money to keep that place running, though with the name Getty attached, I doubt we have to worry about their endowment.

Aside from a fee to park, the museum is free. There is a vast amount of amazing things to see. Gardens to walk through. Views to take in.

If you live in Southern California, or are heading there any time soon, I’m telling you to go there. As soon as you can. I was embarrassed to admit I’d never been to visit before. Now, I can’t wait to go back.

The Art of the Personal Project: Mike Marques 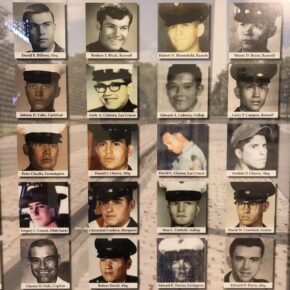