Everybody loves a good idea. The best are often simple and elegant. What if we could build a machine to let people fly like birds? What if people could fit their entire music library in the palm of their hand? What if we could all share tiny bits of information, for free, with anyone, anytime, anywhere in the world?

Good ideas would not exist without their counterparts: bad ones. The worst are often genius, in a bad is good kind of way. (i.e., the mullet.) Most often, though, they’re just plain bad. For a while, my favorite bad idea occurred when I was hired to photograph the bloody slaughter of some local New Mexican cows. My client was a restaurant that wanted to use the snuff pictures to market hamburgers and steaks. Not surprisingly, they are now out of business.

As high as that one might rank, though, while driving from Houston to San Marcos, Texas the other week, I witnessed the granddaddy of all horrible ideas. El numero uno. El jefe. The boss.

I was headed NW on Highway 80, between the little town of Luling, and San Marcos. En route to the Texas State campus, I was excited to see Kate Breakey’s new exhibition, Las Sombras/The Shadows, at the Wittliff Collections.

While carefully minding the speed limit, as I was reminded many times that Texas cops are best avoided, there it was, just off the road to the East. I saw the wrecked plane before anything else. Like the car crashes I mentioned in last week’s column, plane crashes, while less frequently seen by the side of the highway, are equally riveting.

The plane had a crumpled nose, mushed into the dead grass. (Well, sir, you have my attention.) Next, I saw the sign next to it… for skydiving lessons. The hanger loomed in the background, like a kid at a soccer game, ashamed of his dad for berating the ref. Shall I summarize? A company that sells sky-diving lessons thought it wise to advertise said services with a plane crash. I have to nominate this as the worst idea of all time. Anyone care to disagree?

Without bad ideas, though, there would be no such things as good ones. (Yin, yang, etc.) And Kate Breakey’s exhibit was the perfect antidote to the ridiculous wreckage. Should you live anywhere in Texas, or plan to visit Houston, San Antonio, or Austin before July 7th, I’d recommend that you drive to San Marcos to check out the show.

I’d seen an installation of Ms. Breakey’s work at the excellent Etherton Gallery in Tucson back in 2010. I was intrigued. The taste whetted my appetite, and was the impetus for my 3 hour trek through Texas.

Speaking of appetite, I was fortunate to stop at Luling City Market for some of the best Texas barbecue on Earth. It’s so good, when I pulled up outside the joint, a fat man jumped out of a still-moving mini-van next to me, so excited was he to stuff his face. The sealed smokehouse in the back of the restaurant offered some seriously brilliant meat. Cows and pigs, which I rarely eat, called out to my rumbling innards, and insisted they make their way inside my belly. Mission accomplished. (What would a Texas series be w/o at least one George W. reference?)

I’ve always been fascinated by the dichotomy between animals and meat. Alive, they’re animals. Living creatures. Sentient beings. They moo and oink and quack and baa. Dead, they’re food. We don’t call them animals anymore. But if you don’t want to eat them, or kill them, or sell them, there are yet other ways to enjoy a good carcass.

A few years ago, Ms. Breakey got the great idea to pick roadkill and other dead things up off the ground, and turn them into art via the simple, direct process of a photogram. (Talk about preservation technique.) The resulting images do justice to the realities of nature: death is the inevitable conclusion to the cycle of life. And it also perpetuates the food chain, in each and every ecosystem. Bug eats grass, lizard eats bug, bird eats lizard, bobcat eats bird.

There are over two hundred images on display, in different sizes and random vintage frames. Save mountain lions, wolves, bears and humans, the biggest predators around, we see as categorical a display as I can imagine of life and death in the mythical American West. Snakes and birds and mice and rats and frogs and javelinas and foxes and leaves and everything in between. (Including the ominous vultures, which were everywhere in Texas.)

The exhibition map gives all the specific names, but dead, in shadow and repose, there is no way to tell the difference between a yellow-billed cuckoo and a black-throated sparrow. They all just look beautiful, and a little bit horrible as well. The basic human fascinations with collecting, categorizing, preserving, memorializing, and fetishizing are all interwoven.

Some animals repeat, but I was told no two prints are alike. The vultures are huge, as are the coyotes, but the bald eagle is the picture guaranteed to grab your attention. (Like a crashed plane by the side of the road. Sorry, I couldn’t resist.) Apparently, the eagle photo was the most difficult to obtain, as bald eagles rarely drop dead in front of roaming photographers. But strings were pulled, and there you go.

The group of photographs, which I enjoyed in a large, empty gallery, with the subtle sounds of the air conditioning unit in the background, is absolutely fantastic. As a resident of the Southwest, I can attest that the fascination of living in the midst a raw and dangerous natural world is real. If you bump into the wrong creature on the wrong day, you might just end up dead yourself. But the ability to communicate those feelings via art is extremely difficult.

I’d heartily suggest that those of you who can see the show do. There are a few parking spaces reserved for visitors to the Wittliff Collections, in a parking structure under the college library. Kids on skateboards will whizz by you, daring you to hit them with your tiny rental car. (I came so close.) The gallery is on the seventh floor of the library building, and the entry way welcomes you with classic Southwestern decor, including a Saltillo tile floor.

One installation in said entryway was a particular favorite. An eagle, a snake, and a cactus were brought together again. Otherwise known as the sign that led some bloodthirsty Aztecs to found Tenochtitlan so many years ago. (Now Mexico City.) Of course, this wouldn’t be a good story if I hadn’t seen an eagle with a snake in its mouth fly over my shrimpy rental car on the way out of town. Is this true? Do you have to ask?

The invisible photographer had been caught 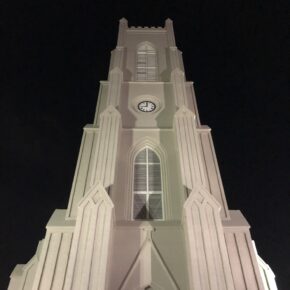 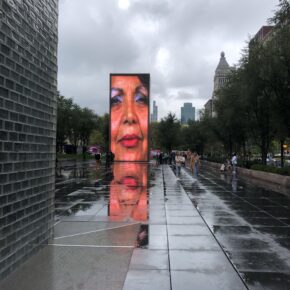