With the ease of assembling stop-motion videos on your computer from the bazillion still photos you can now effortlessly take, I predict we will all be sick of this by the end of the year. I’m still entertained:

Found it on Bohemian and he’s got another cool video there too only this time with tilt-shift (here).

I recently re-watched the Johnny Cash movie, Walk The Line and even though it’s such a cliché for artists, it still sent tingles up my spine when the scene occurs where Johnny goes in to make his first record and runs into what must have been the most prescient record producer in the world, who delivers the mother of all lines to Johnny. Here’s how it  goes in the movie:

Hold on. Hold on. I hate to interrupt… but do you guys got something else?

Was it the gospel or the way I sing it?

Well, what’s wrong with the way I sing it?

I don’t believe you.

You saying I don’t believe in God?

No. I want to understand. I mean, we come down here, we play for a minute… and he tells me I don’t believe in God.

You know exactly what I’m telling you. We’ve already heard that song a hundred times… just like that, just like how you sang it.

Well, you didn’t let us bring it home.

you telling me that’s the song you’d sing?

That same Jimmie Davis tune we hear on the radio all day? About your peace within and how it’s real and how you’re gonna shout it?
Or would you sing something different? Something real, something you felt?
Because I’m telling you right now… that’s the kind of song people want to hear.
That’s the kind of song that truly saves people. It ain’t got nothing to do with believing in God, Mr. Cash.

It has to do with believing in yourself.

I hear the train a coming, it’s rolling around the bend and I ain’t seen the sunshine since, I don’t know when…

‘Some people have said to me that Pieter’s subject is so dramatic that it would be hard to take a bad picture,’ says Biondi, ‘but, you know, a photographer chooses his subjects, and that, too, is an important part of having a great eye. Photographers go where their instinct leads them and then try and work out their fascination for the subject through the photographs they take. That’s what Pieter’s doing but in a kind of extreme way.’ She pauses for a moment. ‘He has a vision and he pursues it relentlessly. He has what it takes.’

Read it (here), Via, Subjectify.

One of the more underrated skills of great photographers.

When I used to send Teru Kuwayama out on assignment I would marvel at the amazing images he would coerce out of a piece-of-shit Holga and how he was never afraid to rely on it for some of the most important shots in the story. And, I’ve always been a fan of imperfection in photography so when I find a photographer who does their primary work with old, unique and sometimes crap cameras I make a note of it because they always seem to bring something interesting to the page.

Here’s a site (Andreas Wolkerstorfer :: cameras) where the photographer runs film through all types of cameras so you can see what kind of pictures they take and although the general theme seems to be vignette with the older cameras, I still enjoy seeing images that aren’t perfect. 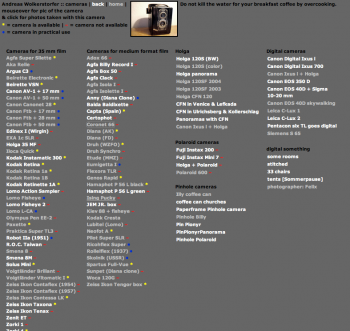 Portrait, Fashion, Fine Art, Photojournalist, Still Life, Lifestyle and Car Photographer. There’s more but this is just to illustrate something that happened recently. A photographer who’s top 3 for me in one of these categories tells me he also shoots in another category which I don’t have a problem with, I just don’t think he realizes that in the other category he’s number 54 on my list.

Unless you are a “named” photographer we use tags to describe how you shoot. Pick the tags below that best describe your photography to see how I refer to you.

I think there’s something insightful here like having a 2-4 word description is bad because there are so many people that have the same 2-4 words and over 12 is probably bad because then it gets hard to remember all the words.

You can tell me all the tags I forgot and I’ll add them in.

I worked with an editor once who–fairly often when I brought him photos–would tell me the photos sucked. I would then try to tell him that no, you’re using the wrong words, you should be saying “I don’t like those photos” which is fine because you’re an editor and therefore you know nothing about photography. This is why I work here.

In the editorial and advertising world, photos are good when they do their job, but it all depends on where you’re standing.

I’m standing over here with other mainstream consumer magazines. My magazine has a specific agenda that involves overshooting our audience’s taste in photography to attract elitist advertisers, favorable press and awards from the NYC photo mafia.

If you’re standing over in corporate head shot universe there’s no need to get all Terry Richardson on their asses because that will get you fired because it’s bad photography.

Usually, when my editor doesn’t like photos it means I’m doing my job.