I recently helped one of our East Coast photographers quote on and negotiate a project for a well-known NGO. The creative brief from their ad agency described still photos showing the client advocates in heroic poses on a white background. The photos would be stripped into other backgrounds provided by the agency (and the agency would be handling the post-production).

The photos were intended for an OOH (Out of Home) campaign honoring those employees and would be primarily used on billboards and bus shelters in the U.S.

The photographer would be one of several photographers shooting subjects in different cities around the country.

After creative calls with the agency and client, and with the understanding that the client wanted to stay within a $15k budget, I put the fees at $500 per unique image for each of the 10 images, totaling $5,000. They asked for the cost of additional images, and I priced each with a 10% discount at $450 each. The per-image fee is low for OOH use, but the photographer is a supporter of the non-profit’s cause and was eager to be a part of this project. I added $500 for the photographer’s pre-pro time to include meetings and securing crew and lighting equipment.

We included two assistants to make sure the photographer had enough help with lighting. We added a DigiTech to manage the files as well as run a Zoom remote viewing for the NYC-based agency not on set. These fees were consistent with previous rates the photog had paid these people on past productions. We added $1,000 for a producer to help book the studio, confirm crew, organize catering needs, and manage the remote viewing and client communications during the shoot.

I included $1,100 for cameras, grip, and lighting rentals. The photographer brought their own cameras and lenses and rented lighting and grip from the studio. $500 was estimated by DigiTech for their needed gear rentals. I also included $350 for 3 hard drives.

We included $750 for a combo Hair/Makeup stylist. This rate was estimated by the stylist.

We included $1,300 for a studio rental day at a studio the photographer had worked in previously and found suitable. This fee included the studio cleaning fee.

$675 was estimated to cover a light breakfast, and lunch needs for 9 people on set. The $75pp also included simple craft services the photographer would bring to the set. Water, soda, snack bars, fruit, etc.

We included $2,000 for third party on-site testing. The testing agency would bring PPE as well for the 9 folks on set.

We had $350 as miscellaneous expenses. This would include $200 of insurance for the photographer for, cover mileage and parking for the crew, as well as any additional snacks/beverages before or after their time on set each day, and tiny bit of buffer for any unforeseen expenses that might arise.

Retouching was to be handled by client, we chose to not charge for the first edit in order to keep the estimate under $15k.

We included a Client Provisions note that all talent, talent coordination & releases, wardrobe and props styling, as well as all image retouching, would be handled by the production company.

The photographer was awarded the project, and the shoot was a huge success! OOH ads for the project were running this past winter up and down the East Coast I-95, as well as a few locations in Detroit, Chicago, St. Louis, and SoCal.

If you have any questions, or if you need help estimating or producing a project, please reach out. We’re available to help with any and all pricing and negotiating needs— from small stock sales to large ad campaigns. 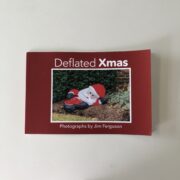