“I am more interested in creating bridges across which we can experience realities other than our own, whether it be those of marginalized people or not.” Eric Gyamfi

Part I. The Intro

Yes, it’s another one of those articles where I begin with a quote.

For all columns I’ve written over the years, I’ve only done that a handful of times.

It was hard to know where to go, in a week like this, because it feels like the Earth is shifting under our feet, minute to minute.

Just last Tuesday, I had a Zoom call with a bunch of my Antidote students, and life seemed at least a little normal.

Not NORMAL, obviously, but we were able to focus on life and work.

Coincidentally, there were folks in Minneapolis, Indianapolis, Oakland, LA and Brooklyn.

Within a day or two, almost everyone but me was living in a world filled with riots and protests.

Just like when the pandemic dropped, it seemed a new reality had been created, fully formed, and it was not like the one that came before.

Oh, by the way, almost everyone on the call was white.

I find myself in the odd position of having already written about almost all of the underlying causes of this new reality, in this column, over the last 8.5 years.

Those of you who have been reading all along know that via photo books, exhibitions, and travel experiences, in my opening rants, I’ve covered systemic racism, class exploitation, Donald Trump, and America’s disgusting history of oppression.

All while trying to maintain a sense of optimism about the future of the country, and the world.

And while I’m obviously a Jewish-American, I’ve done the best I can to empathize with, and humanize, people from around the world.

I do the best I can to keep it real, and check my bias at the door, but given the privilege with which I grew up, I know there are some experiences I can’t “know.”

As a Caucasian in the suburbs of New Jersey, I had safety, security, and could walk into a store, or down the street, without anyone profiling me.

(With my big nose, I did hear Jewish jokes, but that’s not the same thing.)

It was all pretty chill for me in Jersey until 2003, when I was began my MFA thesis project at Pratt, which required repeated visits to my hometown of Holmdel, NJ.

Given that 9/11 had happened only 2 years prior, and that the suburbs were known for quiet streets, simply walking along, minding my own business, taking pictures with an early version digital camera, I became a target of the police.

Twice, I was stopped, and harassed, because I had a pony tail, a goatee, and a camera in my hand.

Eventually, my Aunt, who lived in town, reached out to the Chief of Police, and got me an official letter, claiming I was a former town resident, and had his permission to be there.

That alone is a mark of privilege.

But then, a couple of months before we moved away in 2005, I was visiting my Aunt and Uncle’s home, and when we pulled up in front, Jessie and I were arguing a bit, so we stayed in the car for two minutes to sort out our business, before going inside.

After the two minutes, we looked up and saw a police car.

They pulled up, stopped, got out, and approached the car.

By now, I should mention that I had a black Chevy blazer, in decent shape, and the dented back bumper would have been out of their view anyway.

But we had New York license plates, and it was not a Mercedes. Or a BMW.

That was enough, and when they approached, and started asking questions, we told them who we were, and why we were there.

I grew up in town, and graduated near the top of my class. I attended the elementary school that was only two hundred yards behind us.

They profiled us as hippies, undesirables, and told us they would not leave until we were let into the house.

I was scared, even though I’d grown up in Holmdel, and knew my family would open the door.

It was a terrible feeling, and when I complained to my Uncle, he said, “Good, I’m glad they stopped you. People like you don’t live here, so it’s their job to keep an eye out.”

This is a true story.

And though I still love my Uncle very much, he is, in fact, a Republican.

Part 3. Getting to the point

I could tell you that my son has been discriminated against in his school, because he’s white.

He had to defend himself in fights, multiple times, and then got cut from the 6th grade basketball team, because it was Hispanics and Native Americans only.

His friends even admitted it to him, openly, because everyone knows that the white kids play soccer.

I’ve felt plenty of racism here too, over the last 25 years, but at least I know it comes from resentment of American oppression.

It’s more what the color of my skin represents, rather than the skin itself.

It represents power, and the fact that America took this territory from Mexico.

Which is why, despite the anecdotes I just shared, I have no illusions that I know what it’s like to be an African-American man in America.

I try to imagine the feeling, but that’s as far as I’ll get.

Even so, that hasn’t stopped me from writing politically here, for years, nor has it blunted my desire to speak truth to power when I can.

Part 4. I thought you were getting to the point

I want to write more about Amsterdam for you, to joke about the fun I had, and tell you how I almost died.

But it doesn’t feel right.

Rather, I went back through my photographs, to jog my memory a bit, and thank the art gods, I have just the right thing for today.

The opening quote, which I did my best to illuminate from my own perspective, comes from Eric Gyamfi, a young Ghanian photographer who won the Foam 2019 Paul Huf award.

Part of the prize was a solo show at FOAM in Amsterdam, and I was lucky enough to see it, back in February.

(Before the world changed, and shut.)

The opening gallery, with diaristic photos of various sizes pasted to the wall, was kind of cool. 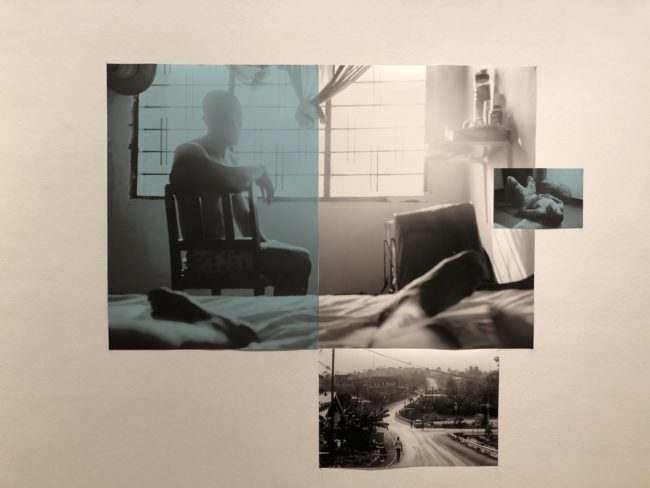 But it didn’t blow me away.

And even after reading an article about Gyamfi and Queerness, in Aperture, I’m still not sure if the artist identifies that way.

But it doesn’t matter.

Because the next set of galleries represented one of the best photo exhibitions I’ve seen in years, and while it was perfect for the moment, (pre-pandemic,) it’s even more appropriate now. (During the protests and riots.)

As you’ll see in the photos, and video, the walls were covered with thousands of portraits of an African male. 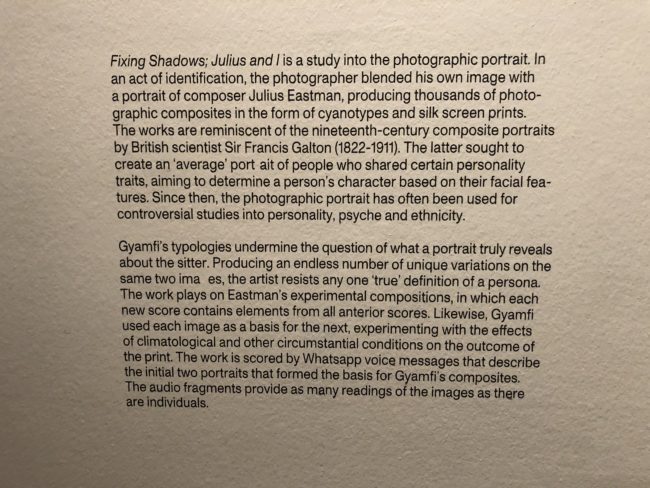 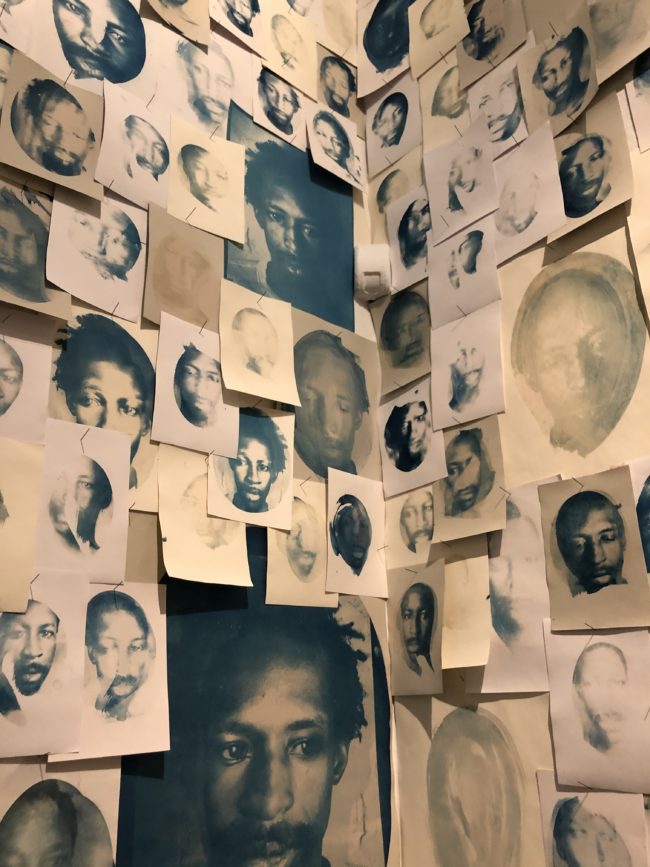 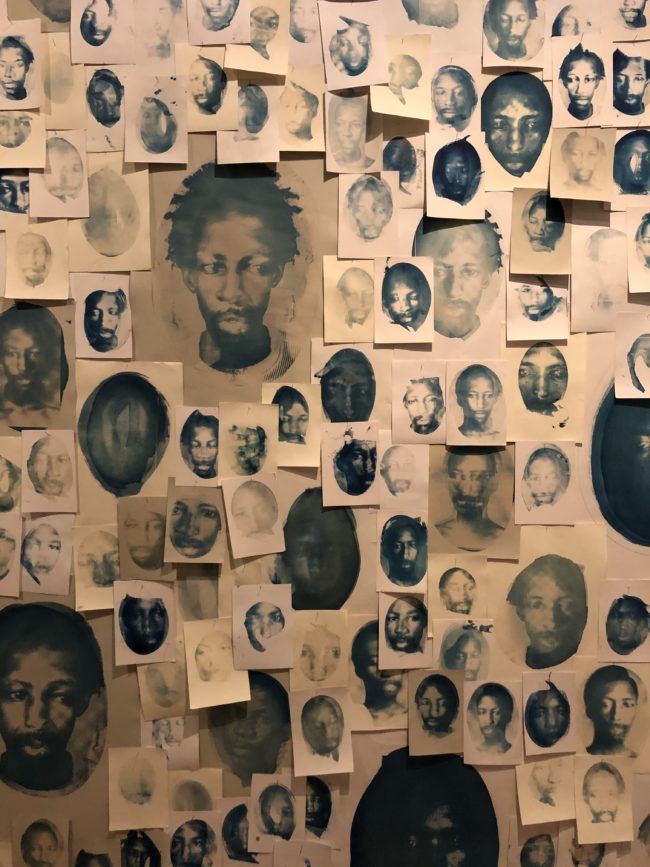 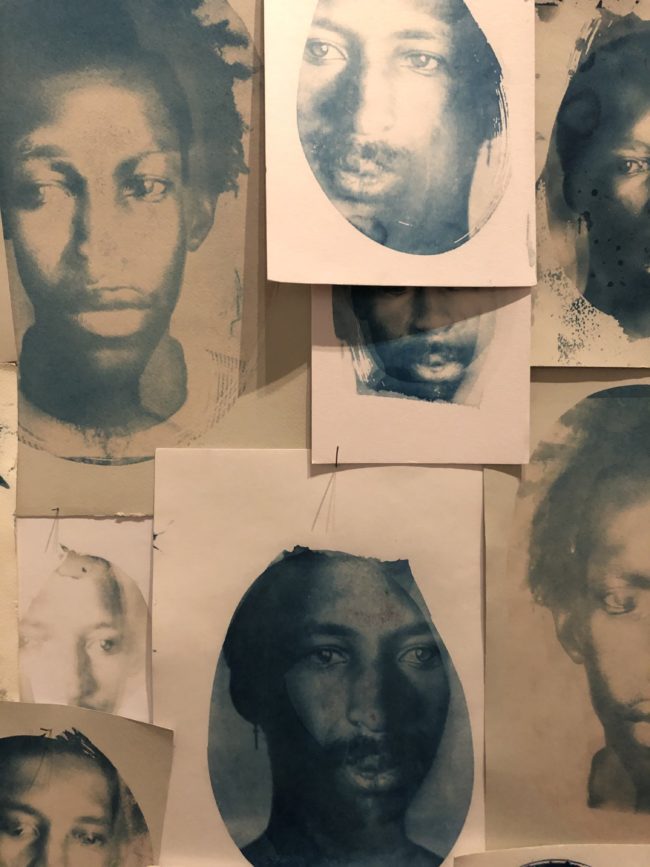 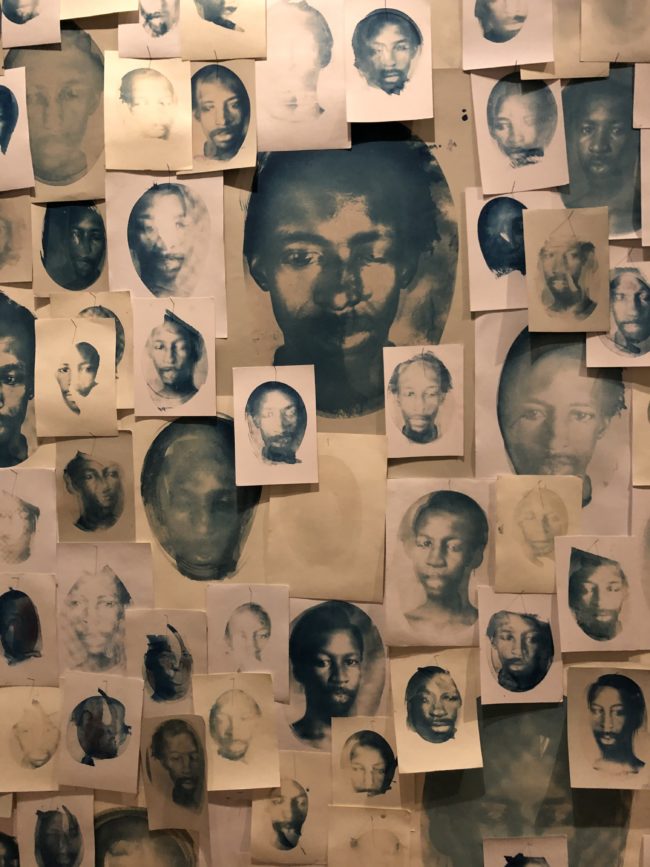 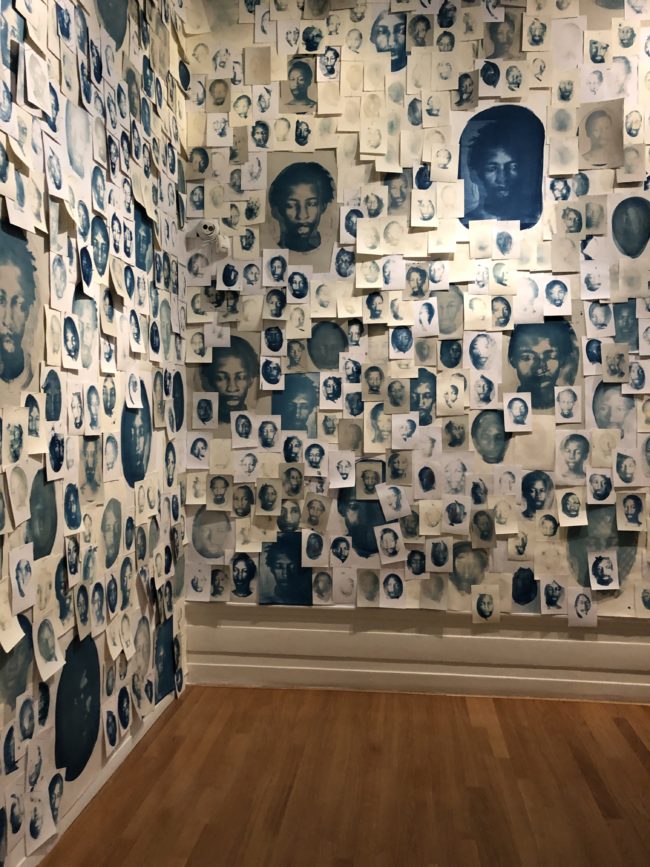 (If Gyamfi were from here in the US, I’d say African-American, but he is not.)

They’re cyanotypes, which made the rooms a sea of calming blue, but some of the pictures reminded me of post-lynching portraits.

These were not happy pictures.

Nor were they even images of a real person.

In a conceptual hook that is not as interesting to me as the results, the artist made composites of himself, and an experimental music composer, Julius Eastman, so they should all be at least a little different.

There were mirrors in several places, so course a selfie-obsessed populace was taking pictures the entire time.

I’d make sure to take some time to look at the walls, to “see” the art, and then I’d pull out the camera again, and set myself up in just the right spot.

Of all the other people I saw in the gallery, everyone was so busy shooting pictures of the work, (and themselves,) almost no one was looking at the walls without a camera.

At one point, someone even tried to explain to me where to stand, to get the best angles. 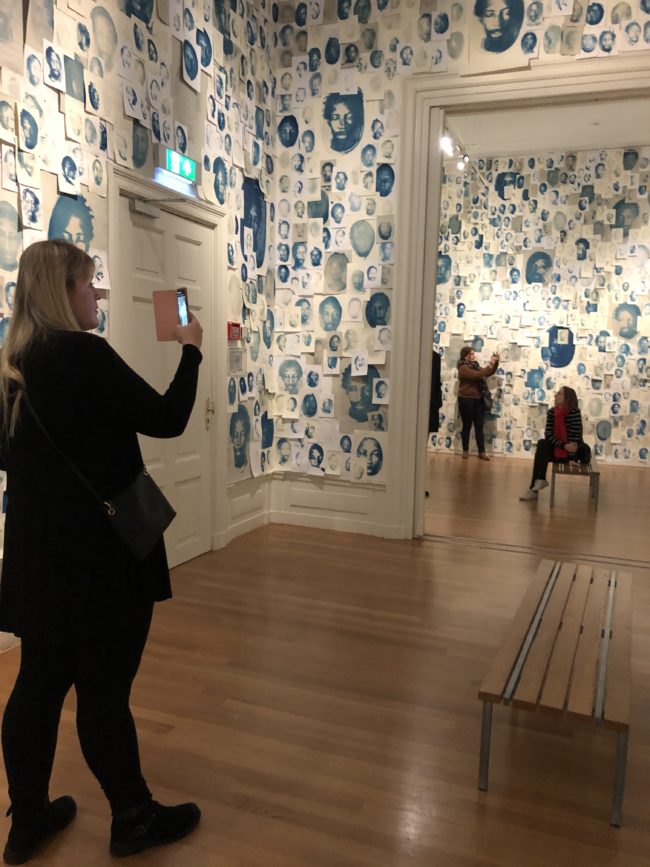 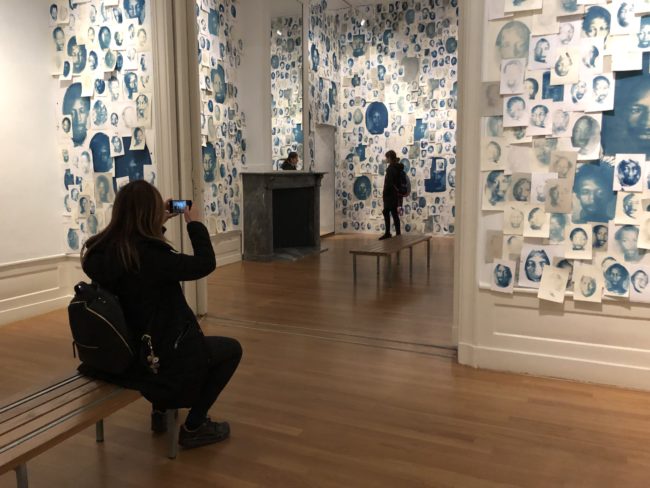 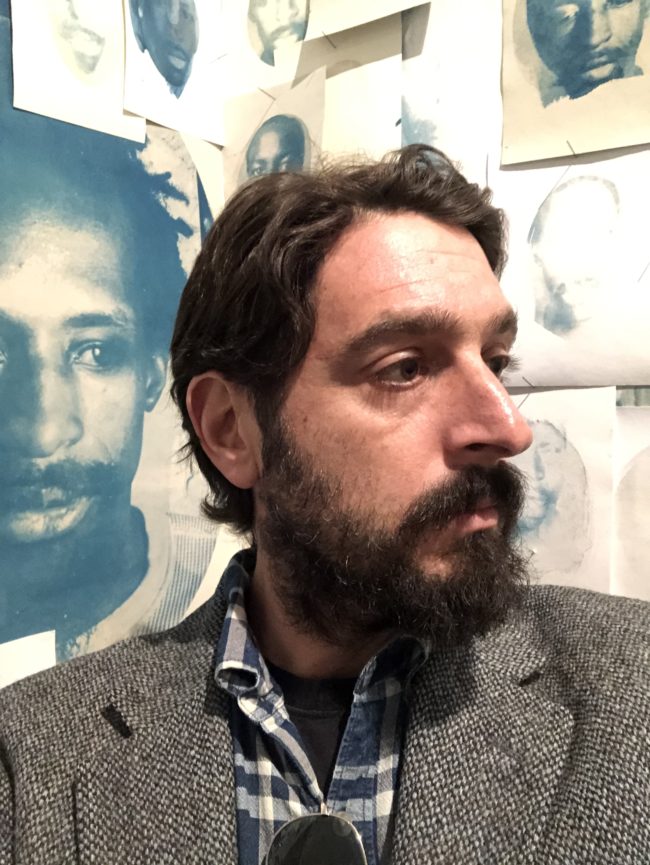 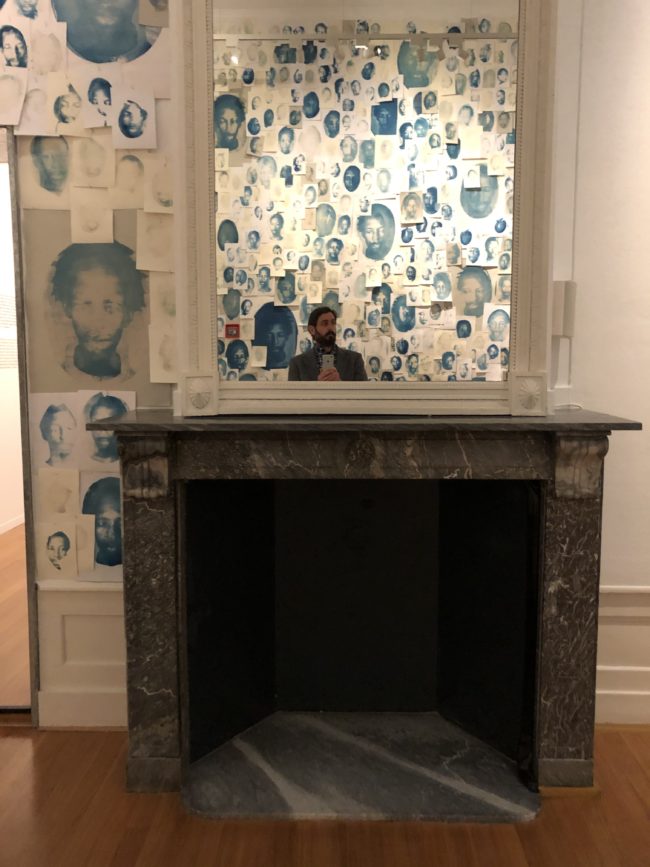 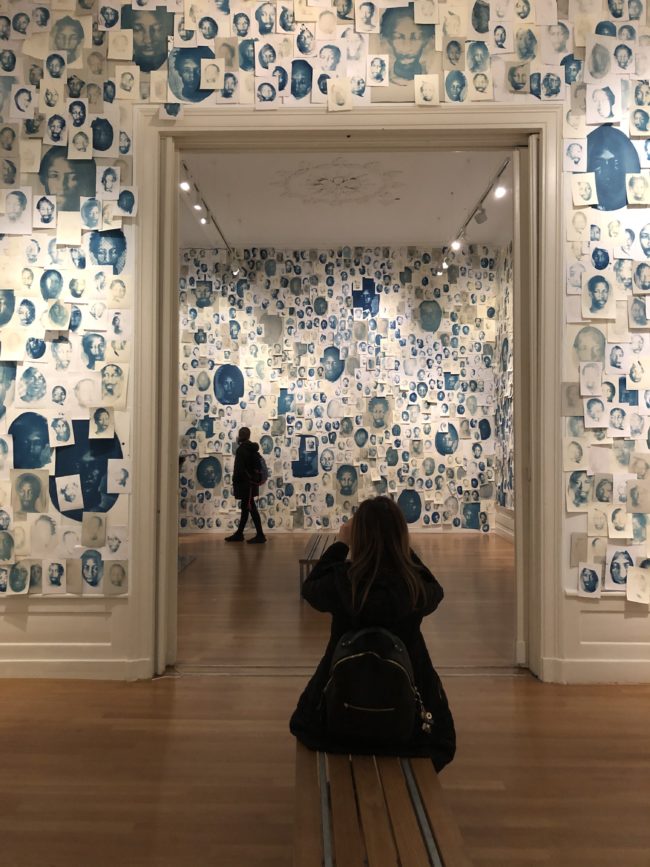 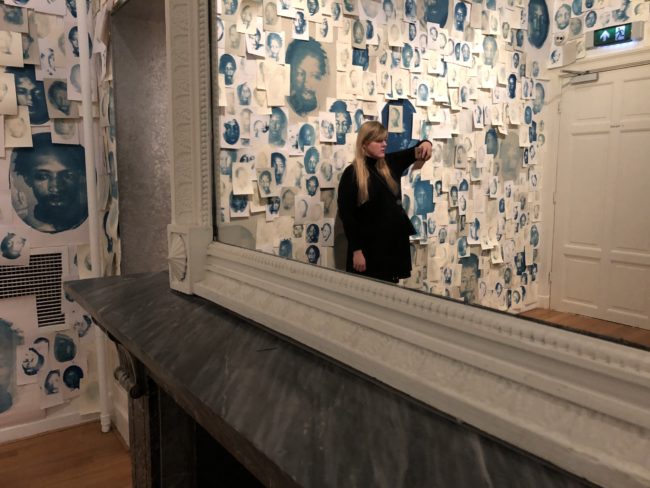 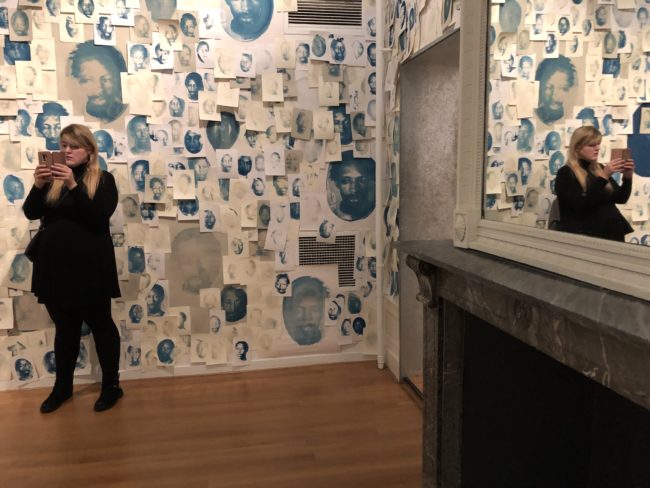 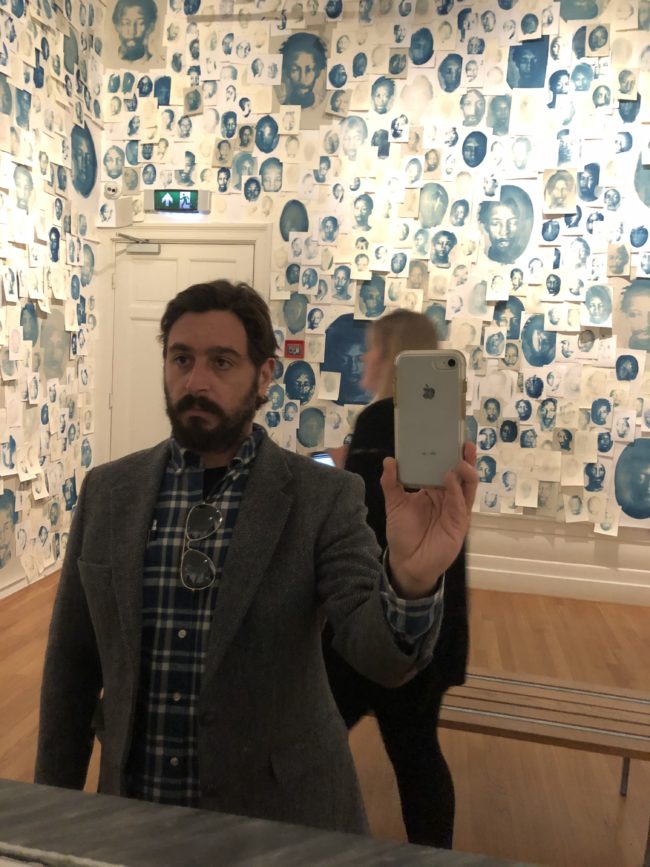 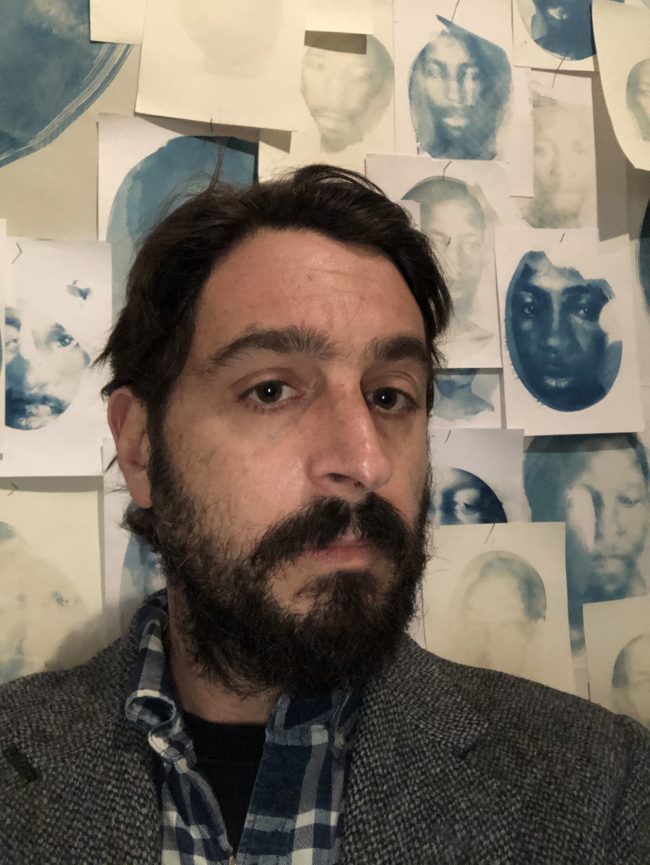 I have to imagine the artist expected this reaction.

That he wanted it that way.

Because while art often reflects us back to ourselves, this was showing human behavior at a crass, dehumanizing level.

But then again, the subject of the pictures was not even a real human.

Instead, a computer-generated hybrid.

More a stand in for all African, African-British, African-French, African-American men who are not seen as themselves.

They’re seen for the hoodie, or the stereotype.

George Floyd, for example, was a massive guy. His friends called him a gentle giant, but Derek Chauvin didn’t see a man.

He saw a creature.
An animal.

And he murdered the man, the human, because he didn’t see him as human.

Nobody would do what he did, on camera no less, kneel on a man’s neck until he’s dead, unless he thought he could get away with it.

(And I say this having been in choke holds before, and having applied them, in martial arts.)

That act, (along with the previous thousands, and the recently publicized murders of Ahmaud Arbery and Breonna Taylor,) so perfectly represented what it means to be a person of color in the United States.

It means you don’t get justice.

It means the cops can kill you, and people can harass you wherever you go, and there’s nothing you can do about it.

The rage builds and builds.
Gets worse and worse.

And finally, when the match is lit, the fire erupts.

We may hate to see images of looting, it may fill us with dread, or maybe it doesn’t?

Either way, we can’t understand it without at least attempting to imagine how it would feel to be powerless against a system of oppression and state-sanctioned violence.

Of insane proportions of Covid-19 deaths, compared to other races.

In the last 6 months alone, here in the column, I asked if China’s imprisonment of the Uighurs was any worse than the millions of African-Americans locked up here in the US.

And I wondered whether our culture, which always values the individual over the society, was in a more precarious position than we realized.

Then, just a few weeks ago, I invoked Karl Fucking Marx, to try to make sense of the naked exploitation of the working class.

I’m no Communist, believe me, but there was no other idea set that could explain that evidence.

It suggested we were on the verge of a Revolution, in attitude, if not in reality.

I’m also no Anarchist, and I’m rooting for the USA to figure this shit out.

To care about justice for all.

To do the hard work of humanizing ourselves to each other. And the Other to ourselves.

So I’m trying it here today.

I know that I’m not a racist, and I’m proud that I try hard to relate to, and appreciate, people from other walks of life.

But then again, I had an Aunt who knew the Chief of Police, and he wrote me a letter of protection.

And I took selfies in that blue room, that psychological experiment that Eric Gyamfi created in Amsterdam, which means I’m complicit too.

And if we’re going to get out of this mess, we’ll have to find new levels of respect and appreciation for each other, and our differences.

Because while an eruption in the streets is often the result of generations of exploitation, while it draws attention to injustice, it cannot solve the problem alone.

Stay safe and healthy out there, and see you next week.

The Art of the Personal Project: Karan Kapoor 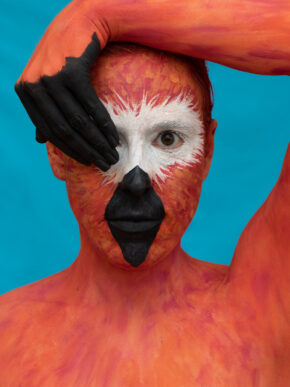