This Week in Photography: Recipes for Disaster

Part 1. The Heads Up 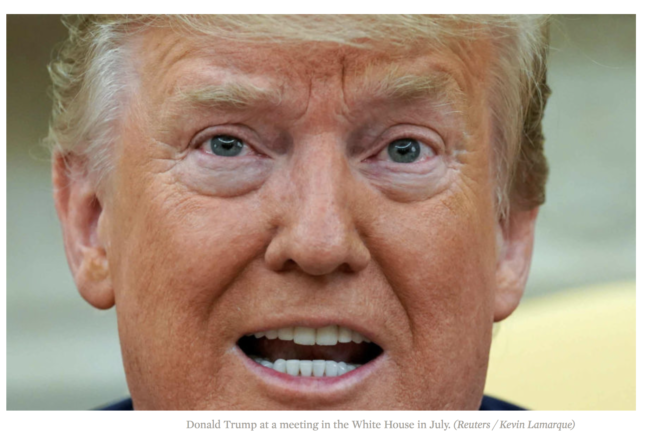 Last week, I wanted to avoid staring into the darkest parts of reality, but today I have no choice.

I’ve been chatting and texting with my good friend, and erstwhile collaborator, Iván. (He was my professor of Globalization Theory in graduate school at Pratt, and has a PhD as well.)

We did some successful modeling of potential Great Recession outcomes at its outset, and then properly predicted the multi-polar world that followed, some years later.

But when we spoke at the beginning of The Troubles, it wasn’t any fun, as he always takes the pessimistic, idealistic side of the argument, and I go for the realist/pragmatist/optimistic angle.

There is not much optimism in our current global affairs, so the chat was grueling, and way too soon for either of us to have made any real observations yet. (Mid-March)

In the last two weeks, though, we’ve talked twice and texted ten times.

Before I get to that, though, I should mention one more thing.

When I met Iván, on the first day of class, he claimed he was a Mexican, Marxist Yankee Fan.

I laughed out loud, and challenged him on the spot, saying there could be no such thing.

The Yankees represented the heart of Capitalism, always outspending their way to World Series titles, and Karl Marx invented Communism.

These were antithetical concepts.

(I once compared “Das Kapital” and Ayn Rand’s “Atlas Shrugged” in an economics paper at Duke, so I am familiar with the material.)

Iván said he was a Guatemalan-by-family, Mexican-by-birth, Jewish, long-time New Yorker, and entitled to root for the Yankees, because he lived in Upper Manhattan, a short subway ride from the Stadium.

(I’ve picked that bone with him ever since, in jest.)

But last week, having finally connected the dots, his words from our second phone call still ringing in my head, I called Iván.

“Listen,” I said, “I don’t have much time. I need to go on a walk with the family, but I can’t get this one idea out of my head. About what you were saying. About Marx.” 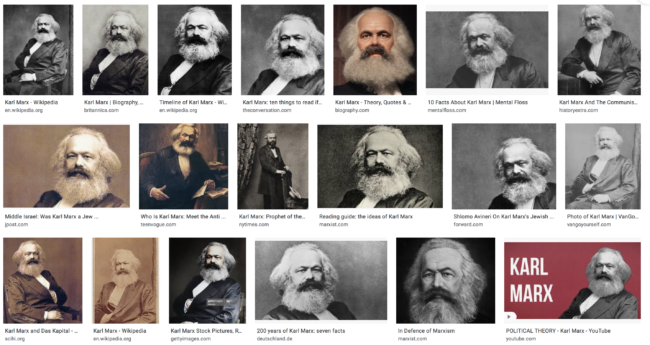 “As I understand it, Donald Trump invoked the Defense Production Act to force meat-packing plants to stay open, and meat-packing workers to report for work, or lose their jobs.

Because god forbid America goes a week without eating all its cows, chickens and pigs.

But the workers are going to get sick, and they have, and they’re dying too.

These workers are lower class, and often Mexican or Central American immigrants, who are also demonized in our culture. Given the low status and wages of the jobs, how good will their health care coverage be?

(Or more likely, they won’t have employer health care at all, because surely some of them are part-time or contract workers.)

And because we live in a country without a robust, free public health system, if these people get sick, and don’t have the right insurance, they might go bankrupt.”

“All so the higher classes can get their meat,” I continued.

“And don’t forget, these plants are also factories of death, assembly lines that kill and dismember live creatures. And the entire industry is also one of the largest drivers of Climate Change.”

“Then I learned in Reuters that China actually owns the largest pork processing company in the US, Smithfield, and that some of the meat processed in the factories, which are being forced open by Donald Trump, is being exported, while American grocery stores are rationing meat.

“That’s Marx,” I told Ivan. “As much as I’ve teased you all these years for calling yourself a Marxist in the 21st Century, what’s happening now is what he described.”

“Exactly,” he said. “The workers must be exploited, surplus value must be derived from them, for the owners to extract profit.”

“Yes,” said my friend. “That is true, and tragic. And it is what Karl Marx critiqued in the Capitalist system.”

And as to being a Mexican, Marxist Yankee fan…in the end, I apologized for teasing him all these years.

The world is infinitely complex, and one can be a Marxist, and a Yankee fan simultaneously.

(Or an American and an environmentalist.)

By now, you likely know I published a book called “Extinction Party,” and I’ll be writing about that, in conjunction with the Amsterdam series, soon enough.

Today, though, I was actually inspired by the book I mentioned last week. The one that was really good, but too bleak for my mood.

(It was THAT book, and not my own, that inspired today’s column.)

Like the excellent Sheri Lynn Behr book I reviewed a month ago, this is also self-published, with a similar construction, and a suggestive cover.

Looking again, now I see the outline of North America.

Open it up, and it’s called “Recipes for Disaster,” by Barbara Ciurej + Lindsay Lochman, an artist team from the Midwest.

Though they haven’t been in the column much before, (if ever,) I’ve been a huge admirer of their work for years.

Barbara and Lindsay do food based, studio, conceptual, still life constructions, using absurd humor, so you can see the connection.

(They showed me a nearly-finished version of this book at Filter Photo in September, so it is definitely not pandemic-response art, despite its timeliness.)

Open it up, and we see, for Chapter 1, what looks like an appropriated graphic poster, which has been partially redacted, of a family around a table. (Black rectangles over the eyes.)

It’s the lead to “Expunge Cake,” which references Trump’s early gambit of removing all Climate Change words, and the like, from government websites.

Feedlot brownies, with all sorts of statistics about the cost of the cattle industry.

Crust, with a skeleton baked on what looks like desiccated Earth.

Can you see why I didn’t want to write about this last week?

It’s so in your face!

Frankly, I feel like some of my favorite work by the team is a bit more subtle, but this is not a subtle moment, is it?

And since we’re all baking these days anyway, now you’ll have this stuck in your head while you’re doing it.

Bottom Line: Wicked, satirical recipe book about the end of the world 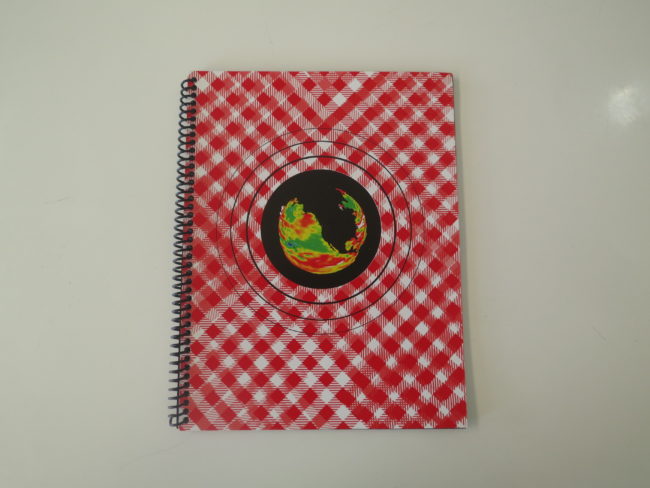 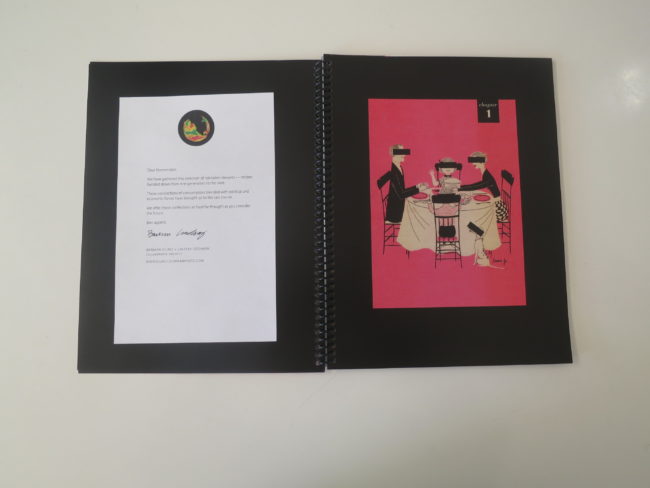 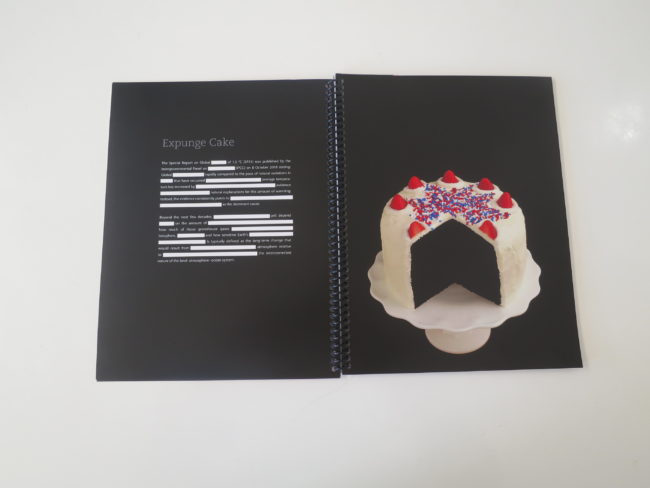 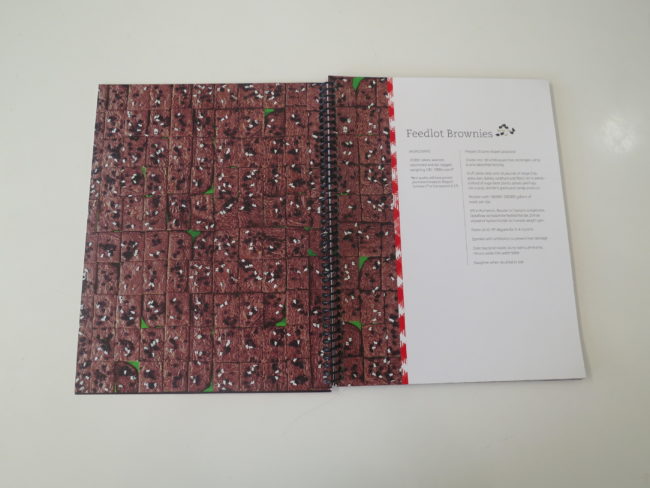 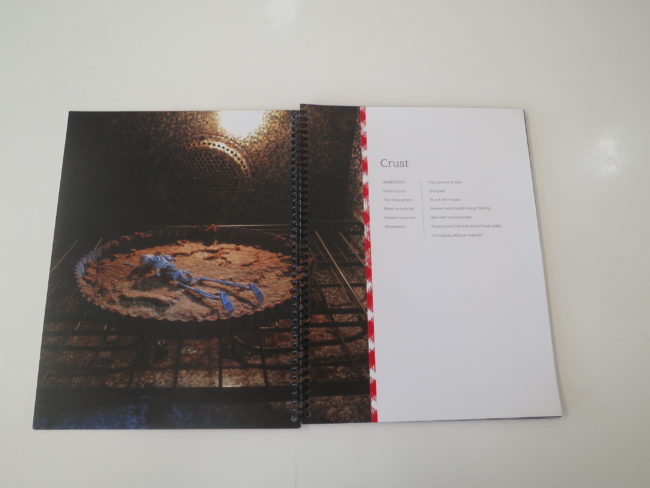 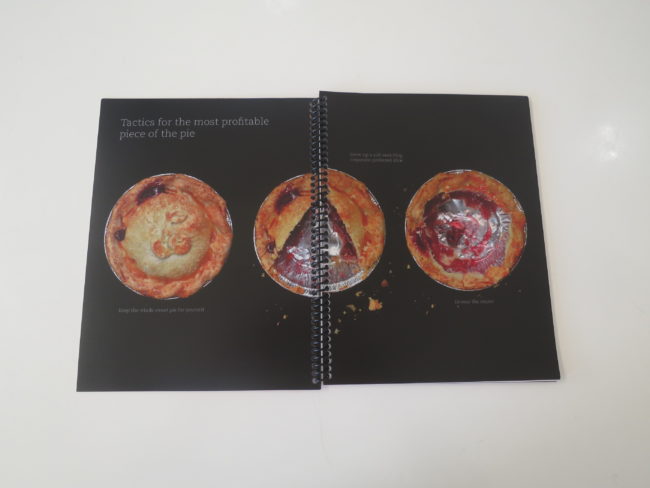 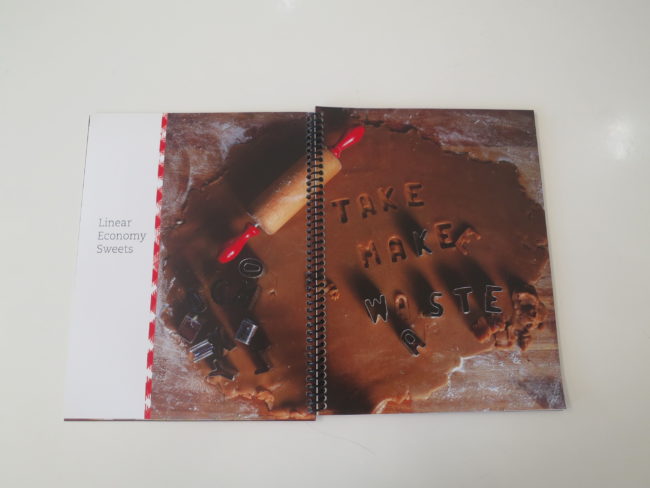 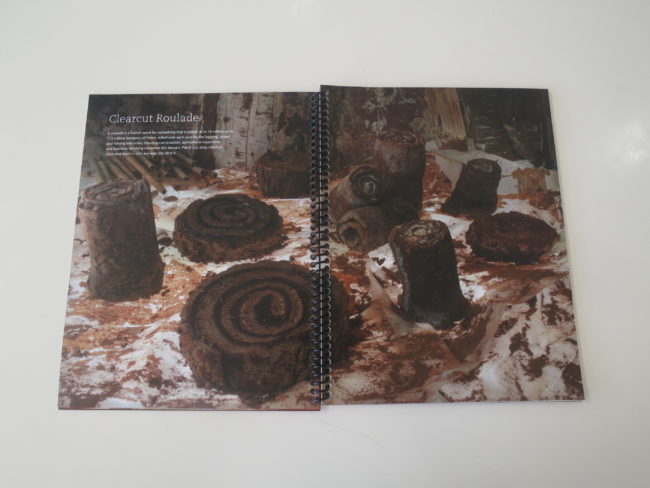 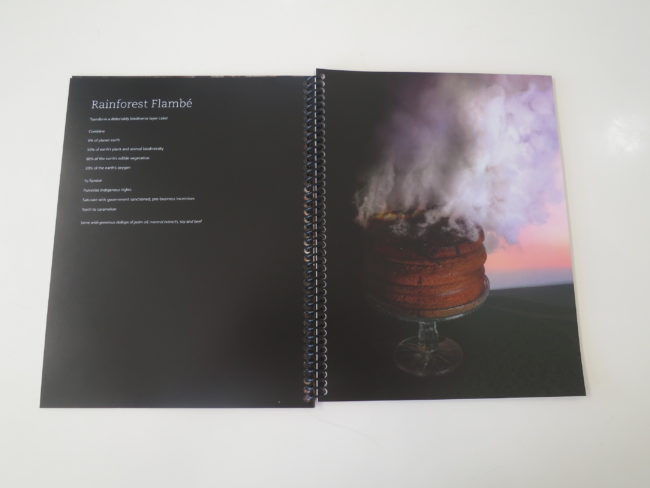 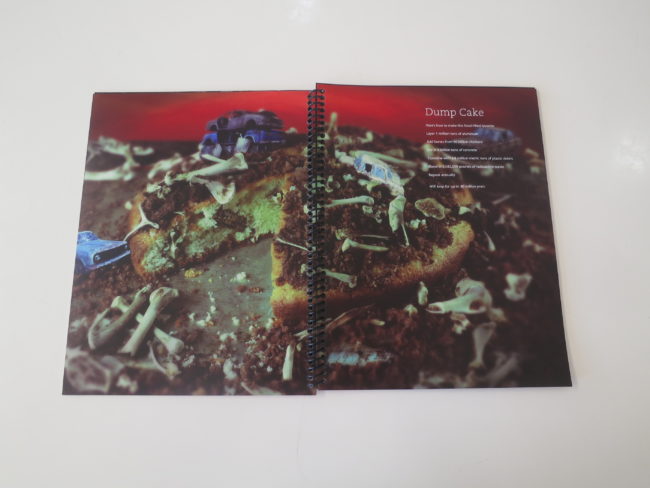 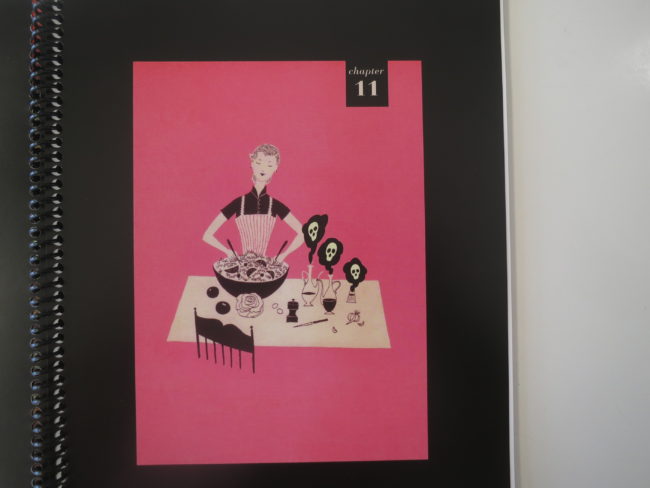 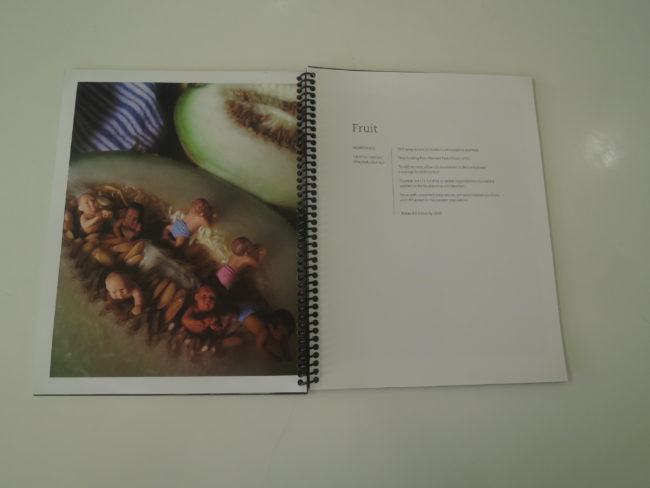 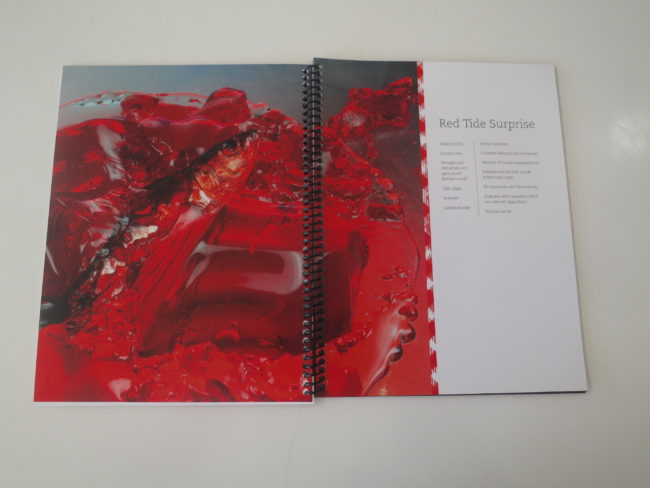 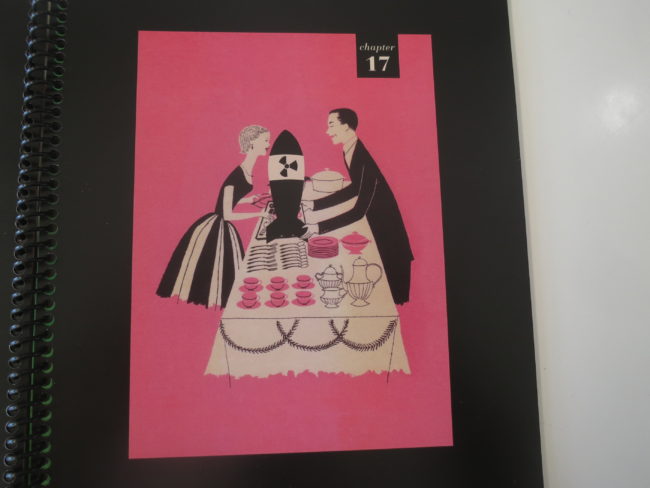 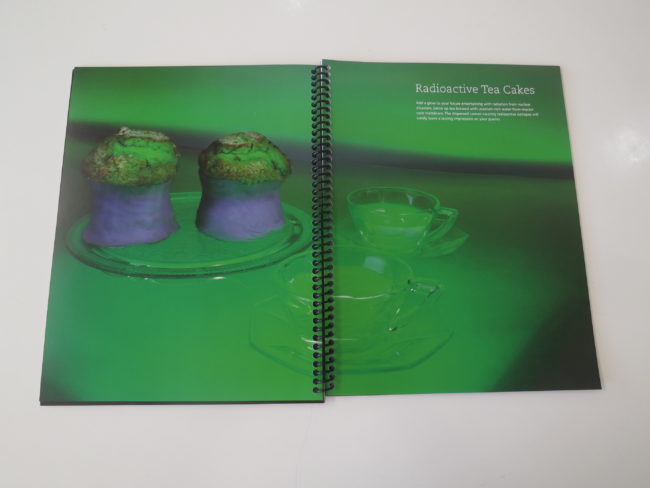 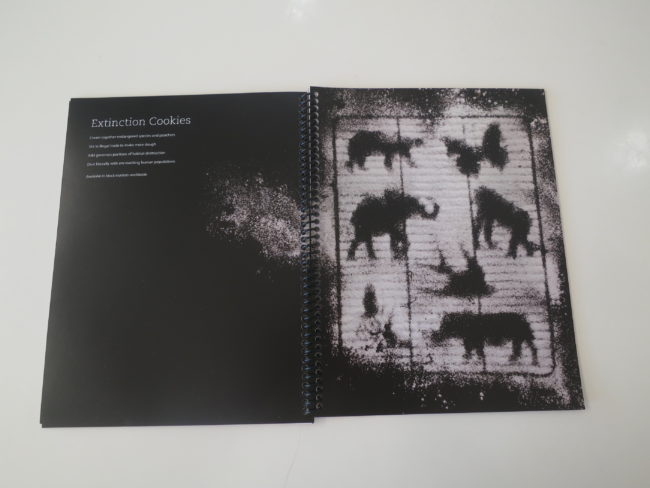 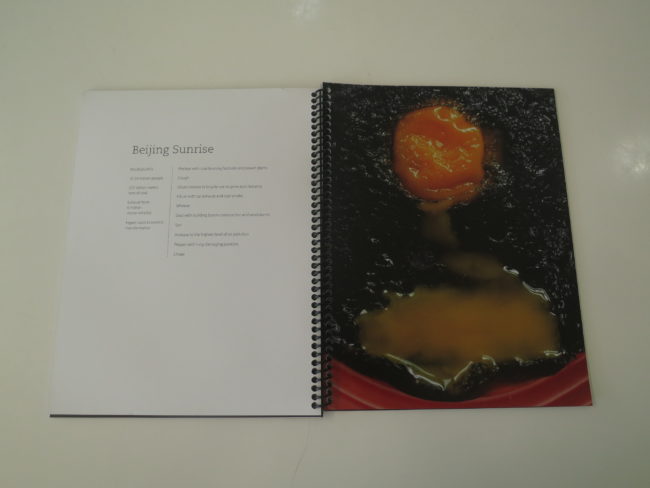 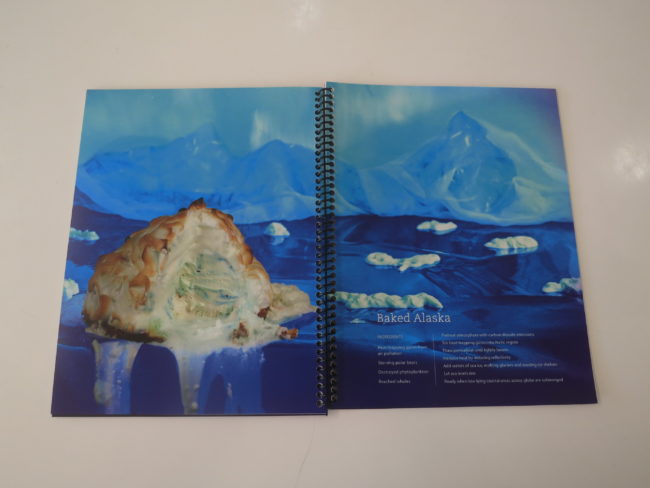 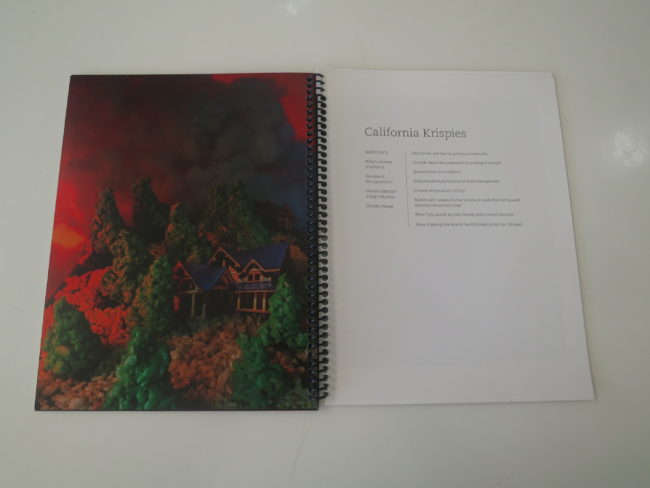 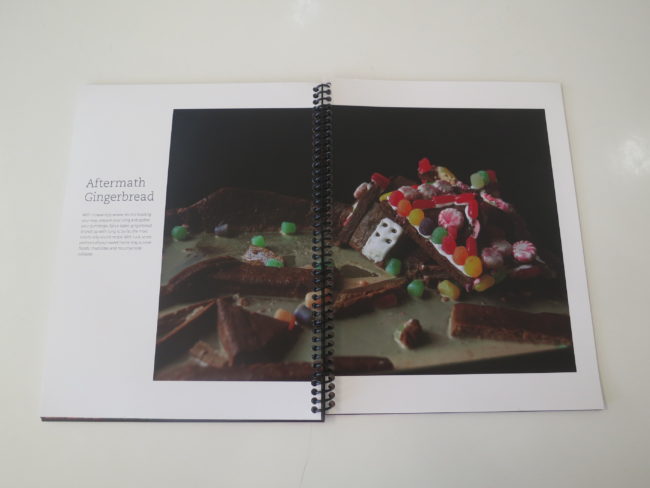 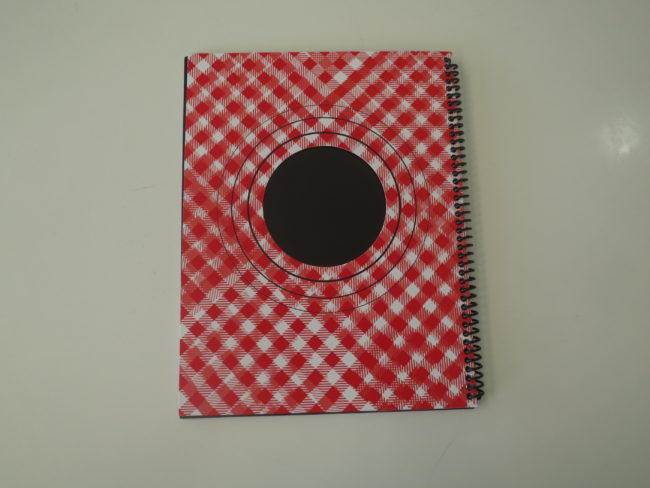