Have you ever heard of Bitty Schram?

Don’t worry. It’s a pretty obscure Pop culture reference. (Even for me.)

Bitty Schram is an actress who’s best known as the player in “A League of Their Own” at whom Tom Hanks shrieks, “There’s no crying in baseball!”

But if you think this is a column about the World Series, (Red Sox vs Dodgers,) you’re very wrong. I don’t give a shit about baseball anymore. The steroid era, (and the fact that baseball’s boring,) quashed any love I might have previously had for America’s former pastime.

Some of you might know Bitty Schram, though, as the sassy, spunky, spirited, Jersey-girl foil to Tony Shalhoub’s famous-early-aught’s OCD detective Adrian Monk, in the long-running USA series “Monk.”

Bitty Schram, (yes, I love typing that name,) co-starred as his assistant and sometime nurse Sharona Fleming, who was as Jersey as Bruce Springsteen and Jon Bon Jovi combined. (It helped that the actress was a Jersey girl herself.)

My wife and I occasionally watched the show back in the day, (it first aired in 2003,) and recently re-discovered it in its current incarnation as a streaming option on Amazon. (Or Prime Video. Whatever. Same shit.)

I remembered that they replaced the Sharona character at some point with a very bland, far-less-talented actress, and that we eventually stopped watching because the she kind of sucked. (No offense, Traylor Howard. If you’re reading.)

So this time around, I began to feel wistful for Bitty Schram, as the show evolved, knowing she was not long for this world. I even did a bit of Googling and discovered that she and two other co-stars had advocated for more money, (so they say,) and she was summarily fired and replaced mid-way through the 3rd season.

The male actors, who according to the internet were in solidarity with her, (including Ted Levine, Buffalo Bill of “The Silence of the Lambs” fame,) were not fired however.

And Bitty Schram was essentially never heard from again. (According to IMDB.)

We counted down the episodes until we knew she’d be kiboshed, and wondered how they’d handle it. An astute viewer could see that the chemistry was not quite right, towards the end, but as there was little warning for what the producers would do, Bitty Schram was there one week, and gone the next.

(They said she moved back to Jersey, and that was the end of it.)

Ironically, though, as they essentially cleansed her from the opening credits, there was one shot left in which her curly hair, just a hint of it, can be seen at the edge of the camera frame as she supports Monk’s arm.

It’s impossible to miss, if you know what you’re looking for, and that little bit of Bitty haunts the show each time I see it. (Sorry, that was a terrible pun.)

For a week or so, I felt really bad for her, and internalized her struggle.

But then you could see the creators clearly wanted to pivot, as the meta-narrative became less about Monk’s paralyzing OCD and germaphobia, and less of a who-done-it murder procedural.

Rather, they wanted to increase the physical comedy, and give the brilliant Tony Shalhoub more time to shine. His new assistant, as bland as a piece of wheat toast with no butter, was there as straight-woman only.

Still, the hint of Bitty Schram sits at the edge of that frame, each episode, reminding me of all the under-appreciated women who stuck their necks out, only to get their heads chopped off. (Metaphorically. There’s no decapitation in “Monk,” to be clear.)

We take women’s issues seriously here at APE, which is why I’ve been on a year-long-crusade to increase our submissions from female photographers. Rob and I agreed that having balance was necessary, and vital, and it wouldn’t happen on its own.

You may have noticed our repeated request for such submissions at the end of each column, and you can trust that I also respond enthusiastically each time a publisher offers to send a cool book by a female artist.

And today’s no exception.

“Hidden Mother,” a recent photo book by Laura Larson, published by Saint Lucy Press in Baltimore, turned up in the mail recently, and I’m so glad it did.

Photo geeks are probably aware of the 19th Century trope of child portraits taken with mothers stabilizing their kids, hidden beneath a cloth so they didn’t become photo subjects themselves.

It leaves most people to question, “Why not just include Mom with little Timmy or Sally, (more likely Harriet or Woodrow,) and it’s a question the book poses directly too.

I assumed, when the book was offered, that it was a collection of these creepy pictures put together in one volume, and wouldn’t it be perfect around Halloween? (Coming next week, making this my official Halloween column.)

Boy, was I wrong.

Laura Larson has instead created a hybrid project that includes some intellectual-speaky essay writing, (replete with obligatory Roland Barthes reference,) but even that is a feint.

Mostly, the super-strange and unsettling “Hidden Mother” pictures are interspersed with poetic, lovely, personal stories about the process through which the artist adopted a little girl from Ethiopia.

As a single mother, no less. (Just like Sharona Fleming.)

Honestly, this is an excellent little book, and I love everything about it. The size is perfect, making it intimate, and just-right in the hand.

The writing is wonderful, and manages to straddle the line between formal language and a vulnerable spirit. And of course the pictures are great, in particular the set in which the “Hidden Mother” has literally been scraped away.

Sometimes, rather than leave her covered in the frame, they removed the emulsion, a complete eradication that is symbolically resonant in ways I need not explain in 2018.

Later, rather than expose the pictures she took of her daughter, Gadisse, (which she wants to keep for herself,) Ms. Larson describes the imagery in words.

Never too many, and never too few.

(It’s just right, like that fairy tale about the sassy, spunky, spirited girl who ate porridge that did not belong to her.)

According to the book, before she was united with her daughter, Laura Larson felt an almost umbilical-like connection to Gadisse via photographs she received through the Interwebs.

In turn, she sent selfies to Ethiopia that she made using Photo Booth on her Apple computer.

The 21st and 19th Centuries marry so well here, as do the imagery and text. It’s a killer book, and I hope you’ll read a few of the text pages below, rather than just look at the pictures.

It’s a great reminder, (to the many parents out there,) to take nothing for granted. If you’re lucky enough to have healthy kids, hug them tight, and make sure they don’t eat too much candy next week.

(But you can. You’re a grown up. Kit Kat’s for everyone!) 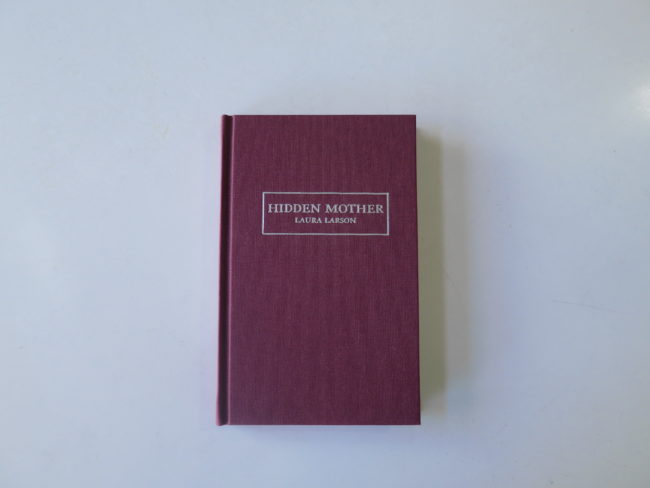 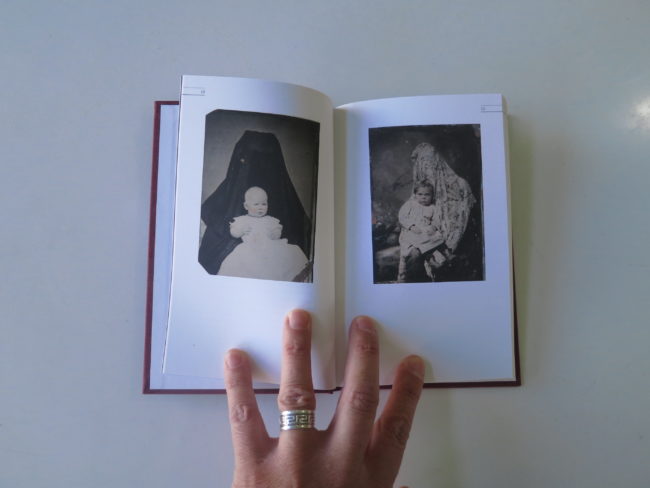 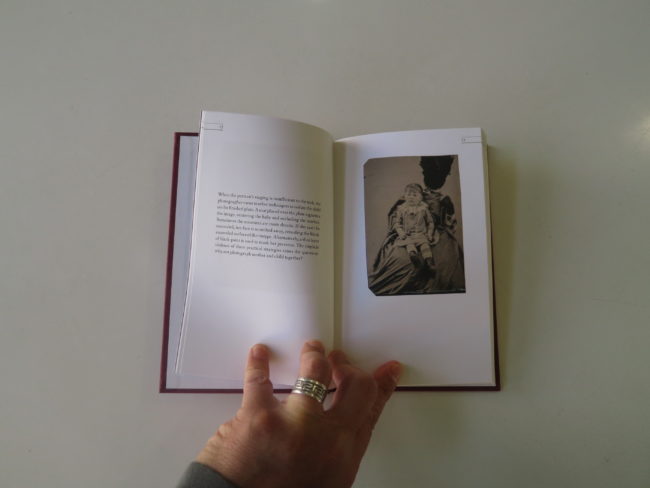 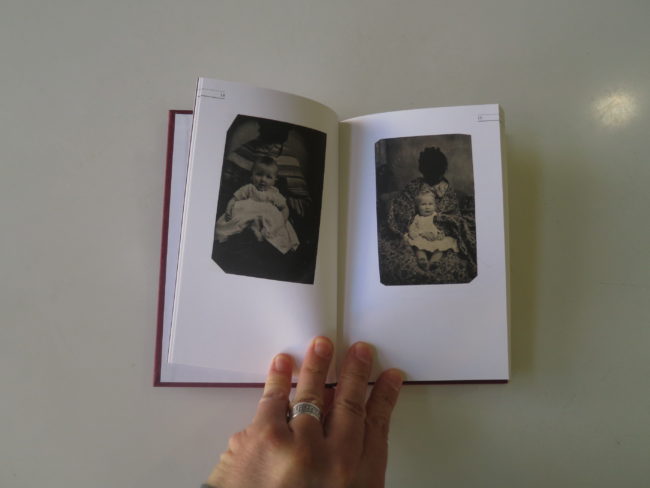 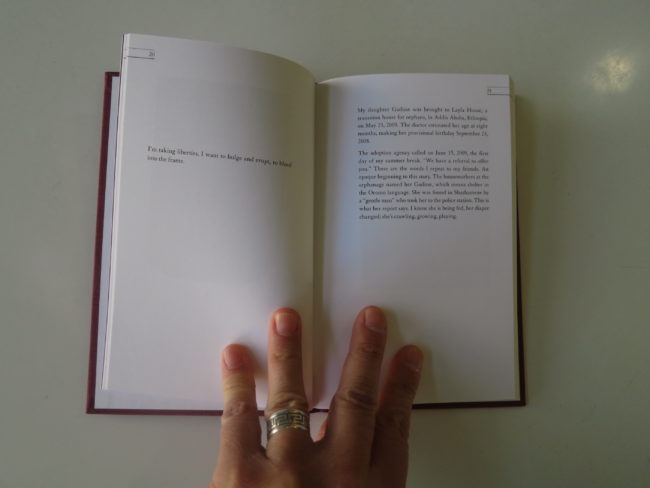 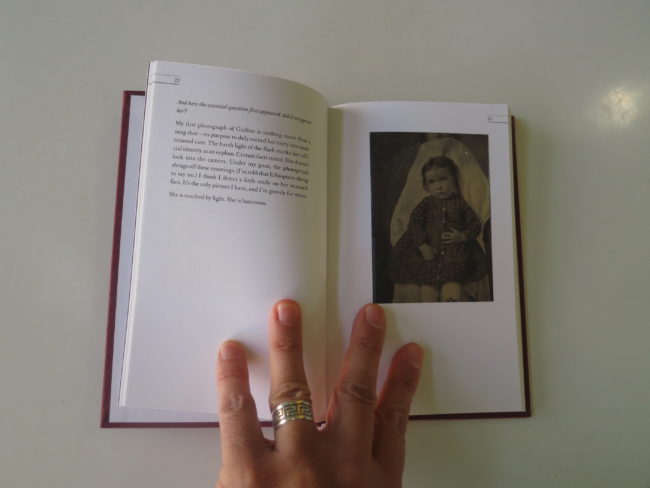 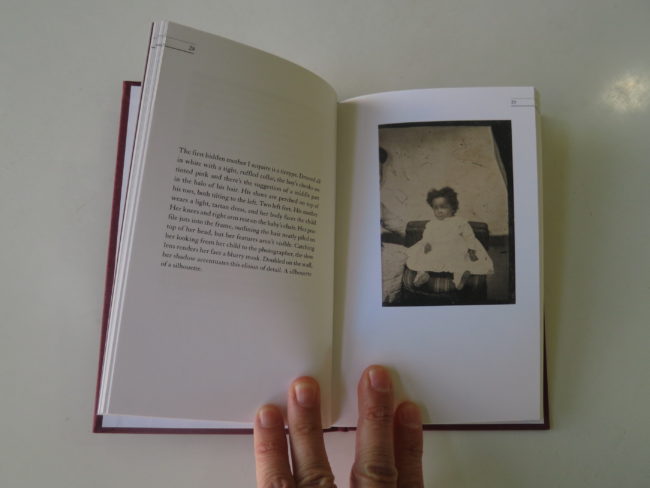 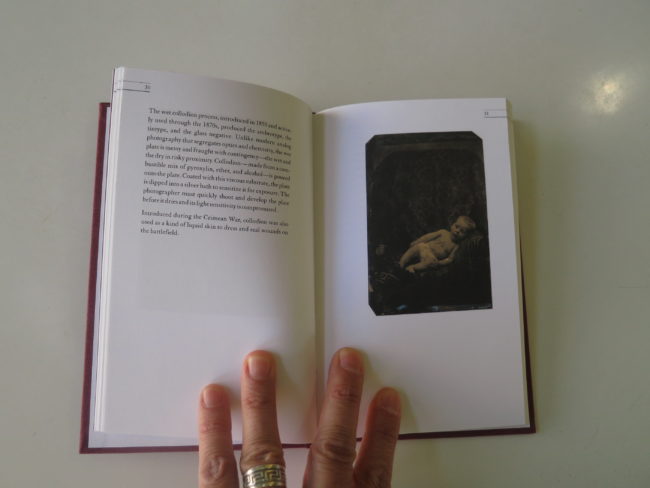 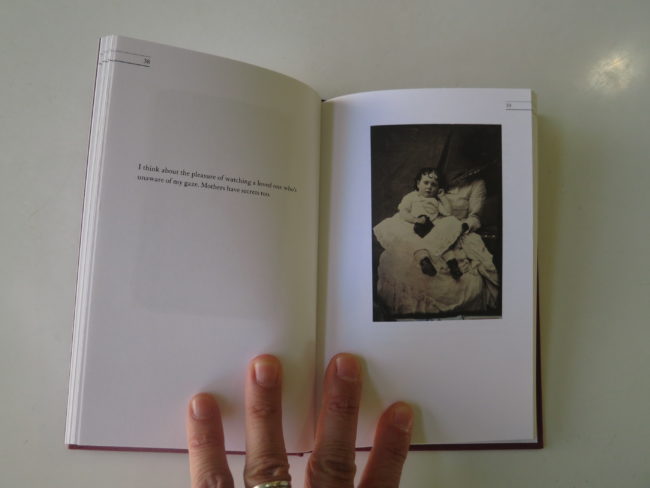 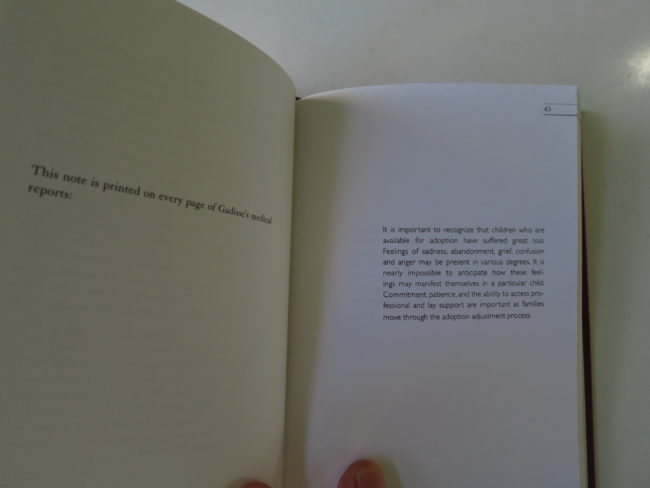 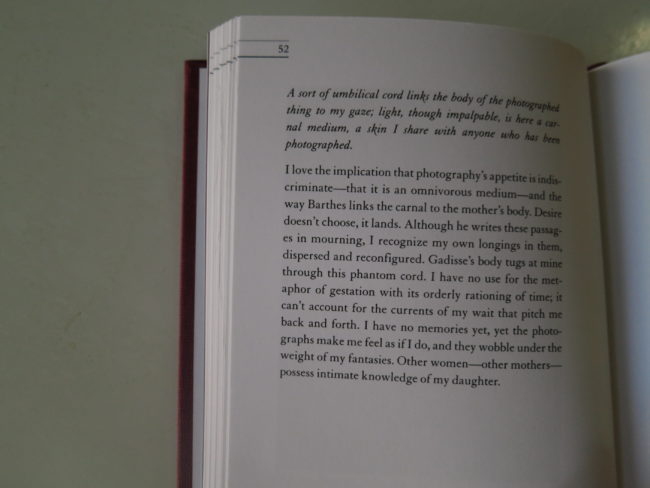 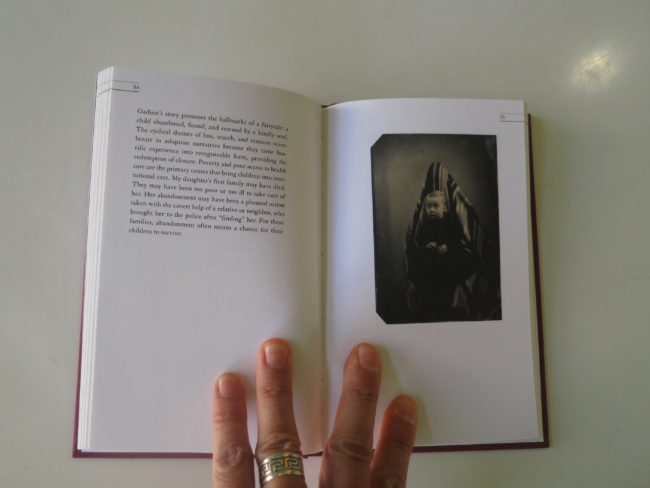 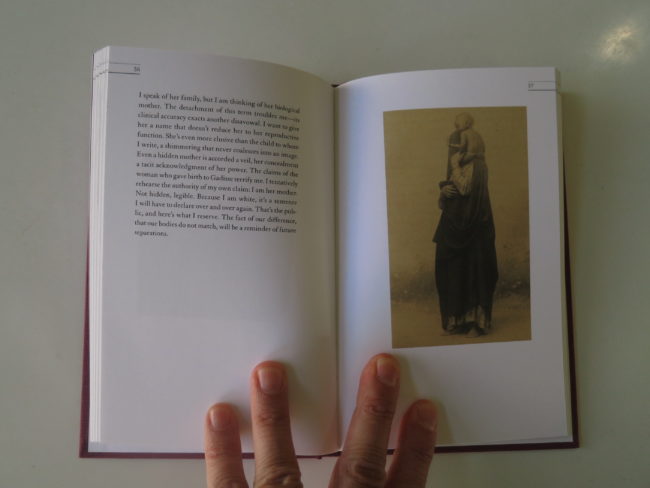 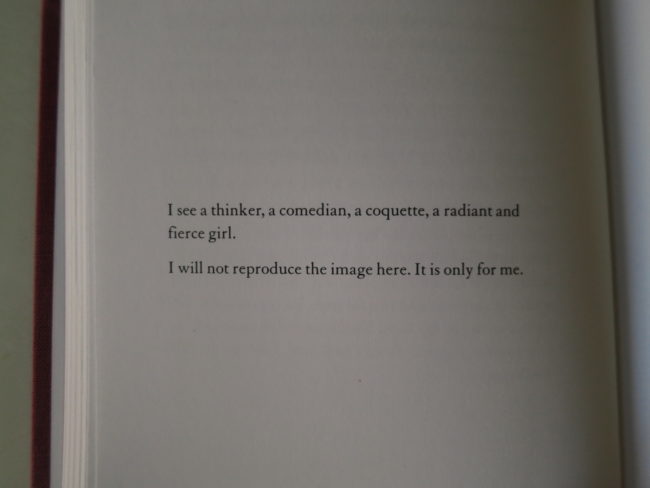 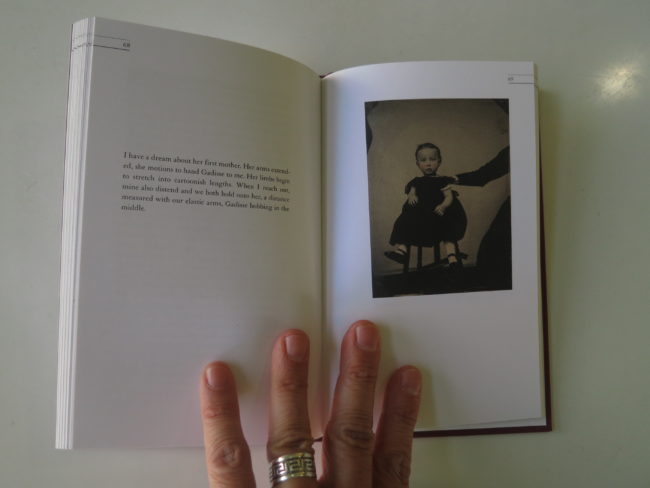 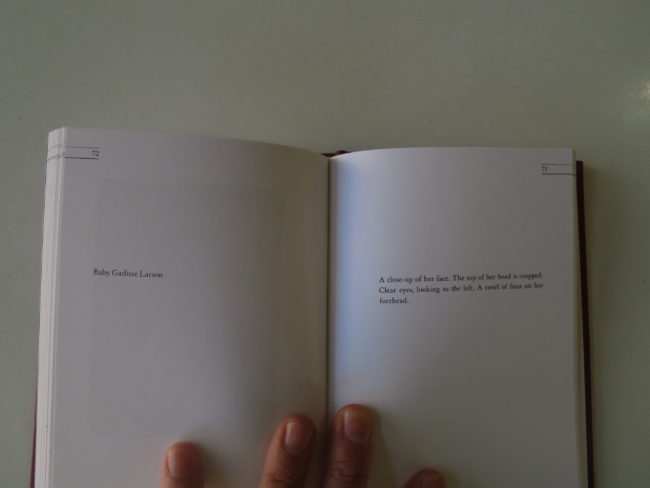 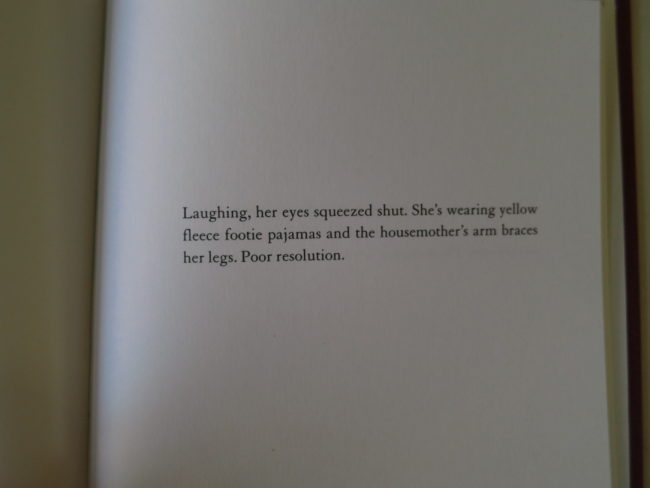 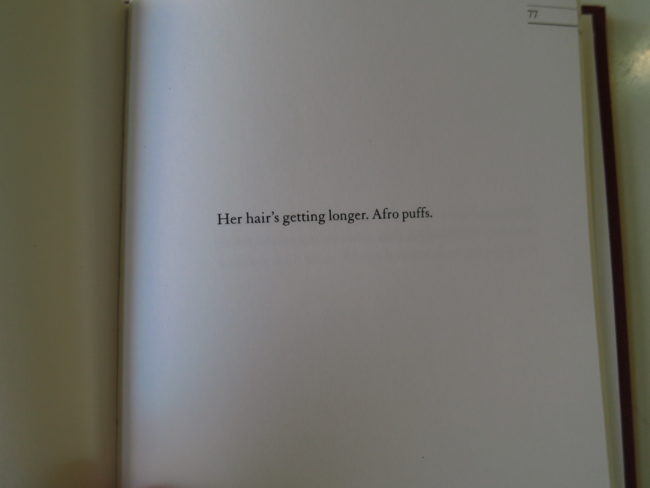 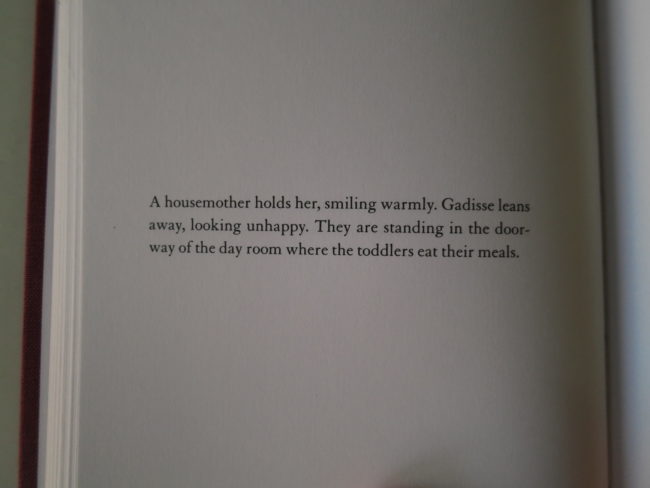 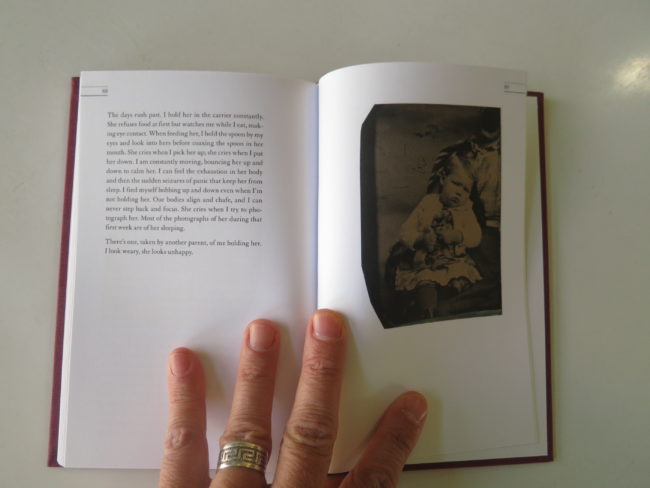 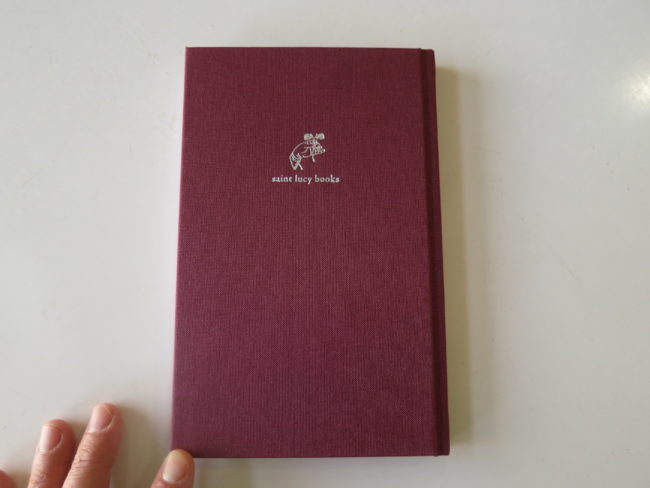