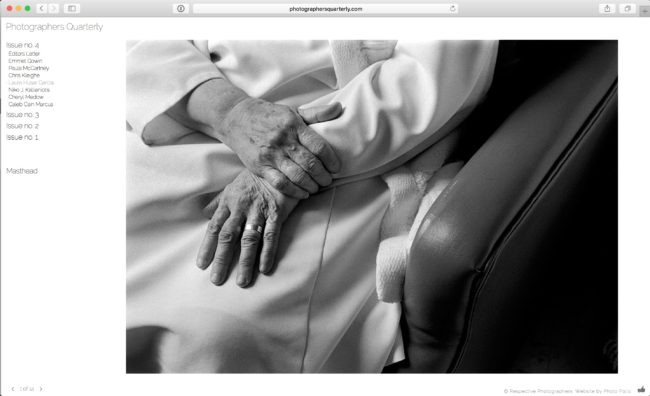 When you name your magazine Photographer’s Quarterly, there’s an implicit promise of 4 issues a year.

But I’m famous for my honesty, so here comes a dose. When I first pitched Rob on the idea for PQ, I had a lot more time on my hands. Back then, hours might fly by, unaccounted for.

But my life changed.

I took on a new job, with more responsibility than I could reasonably handle. As a result, I’ve been constantly behind this school year.

This issue was edited with Winter in mind, as I expected to have it ready in February. That’s the truth.

Now it’s May, and many of us are thinking of Summer. Will we squeeze in three more issues in 2016? Perhaps. I guess. (But it’s not bloody likely.)

That said, the last four weeks here in Taos have been a bombardment of snow. Winter, which took a hiatus in a beautiful run of March and February weather, came at us hard this Spring.

I write this not two days after our most recent snow storm, on May fucking first, when flakes fell from the sky like dollars raining down at an Atlanta strip joint. (Random reference, yes, but you get the point.)

Speaking of getting to the point, I’d like to introduce the artists we’re highlighting in this, the Spring issue of Photographer’s Quarterly. As usual, we’ve aggregated cool photo projects for your perusal. Though they were originally envisioned as being elegies to, or respites from, Winter’s icy gaze, now they’ll have to stand in for rebirth, renewal, and all the good juju Spring has to offer.

Not that we favor the famous here at PQ, but today, we’ll start off with a small sample of pictures from the legendary Emmet Gowin.

Though he’s super-well-known for his family pictures from the 60’s, and his environmental, aerial work later on, this particular group of photos, from early this millennium, has not been widely seen.

It includes butterflies, made in Central America, and images of his lovely wife Edith, who has aged along with Emmet. Though Nick Nixon is more renown for giving us proof of the ravages of time on flesh, by photographing Edith later in life, Emmet has produced a counterpoint to the vision of his sassy beloved, pissing on a barn-wood floor in Virginia.

I’ve seen Paula McCartney’s work around the web a lot in the last few years. Unfortunately, I still haven’t seen it on the wall. But her project “A Field Guide to Snow and Ice” is simply beautiful. Not much explication needed here, but I suspect you’ll dig the pictures.

I met Chris Kleighe at the Filter Festival in Chicago last Fall. Such a great guy. He showed me a book of his photographs taken at Caral, an ancient site in Peru that’s recently been proved the oldest in the Americas. Its 5000 year old society changes the historical narrative, as we now know that the Western Hemisphere had a major settlement as old as Egypt, China, and Mesopotamia.

The pictures are pretty excellent, as they document the ruins in various types of light, and mashup closeups of art objects with sky shots of geoglyphs made from a hot air balloon. Chris is passionate about spreading the word, as archaeological knowledge often takes a long time to codify, and Caral has only been understood in the last decade or so.

I also met Laura Husar Garcia at Filter, though not during the reviews. (We threw back a few drinks at a party.) Luckily, I got to see some of her work when I judged the Critical Mass competition last year. Her project about aging Nuns is obviously poignant. Rarely does the choice of black and white end up being this crucial, but it works perfectly here.

Niko J. Kallianiotis emailed me to check out his work late last year. We try to include viewer submissions here in PQ when possible, I really liked his pictures from his native Greece, though he’s currently based in the US. All year long, we’ve heard about the migrant crisis in Europe, and how it’s affecting Greece. (Unless the stories focus on Greece’s nightmare economy.)

Furthermore, when most people are jonesing for Summer, they dream of perfect Aegean beaches, cold beer, and salty spanakopita. (At least I do.) So I thought this group of pictures, which presents a more mundane reality, was a cool thing to show you guys.

We’ll thank Critical Mass again for introducing me to the work of Cheryl Medow. Her project photographing exotic birds is not something I’d normally show, as it lacks that edgy, weird vibe I like to highlight here at PQ. But man, are these pictures compelling.

I think it’s predominantly the hyperreal aesthetic, as the creatures look like they were birthed in Maya, or some other rendering software, rather than coming out of eggs kept warm by their mother’s bottoms. And thinking of Tropics might just get us through the last few cold snaps, before Summer is here in earnest.

Last, but of course not least, we have the work of Caleb Cain Marcus. I’ve reviewed two of his books in APE already, and am officially bringing the first project back here, as a long-form photo essay, because I like it so much.

These pictures depict real glaciers. Mountains of ice on which the artist actually walked. But his manipulation of scale, and savvy digital skills, have rendered the subjects as hyperreal as Ms. Medow’s birds.

We’re killing this planet because people are so disconnected from the natural world, and from the consequences of their actions. These photographs, which make real nature look so discomfiting and artificial, are the perfect way to honor the vulnerable victims of our collective appetite for consumption.