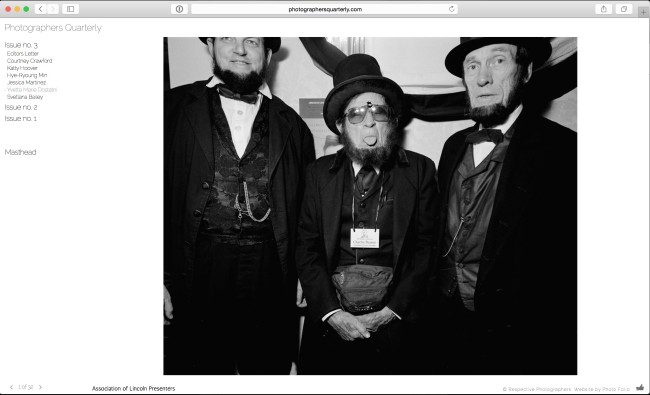 I was never what you might call an “artsy” kid.
Not me.

I was a decent-enough jock in a suburban town, in the days before the Internet.

Sports were all we had.

I would have been fine, socially, if my younger brother hadn’t been better looking, more popular, and a better athlete than I was.

Rather than thinking myself well-adjusted, I spent much of my youth jealous of him. Brooding. The fact that we didn’t get along only exacerbated my sense of ennui. Eventually, my artistic soul outed itself.

Because the more I get to know myself, the more I realize something inside me craves to see new things, to make pictures that push boundaries, and to write from the heart, no matter the consequences.

As I’ve said in my regular writing gig at our parent blog, A Photo Editor, I like the edgy stuff. The things that aren’t for everyone. The visions that make you uncomfortable, so you can then ask why?

This is now our 3rd issue of Photographer’s Quarterly, the online magazine Rob and I dreamed up so we could show whatever we want. Long-form-visions that would otherwise be chopped. Pictures that may not need an explanation, but might well put you off as much as they engage you.

It’s fun to make up the rules as you go along.

Though there’s already snow on the ground here in Taos, it is still Autumn, technically. Fall is the time for change. The leaves drop, and so do our natural defenses. (Gotta get your flu shot.)

Now that you’re more vulnerable, we’re pushing this venture up to hyperdrive, to see if we can make a bigger impact on your psyche.

We’re always hearing about why there needs to be more diversity in the photo world. Some people blog about it, or Tweet about it, and others just take it as gospel. We need more opportunities for young artists, women, and people of color.

I love it all, frankly, and hope you will too. But if you hate some of it…if it makes your blood boil and your eyes expand until they implode in your skull… that’s fine too.

We’ll begin with Courtney Crawford, a young African-American artist currently studying for her MFA at Columbia College in Chicago. She’s originally from the San Antonio, Texas area, so I do wonder how she handles those Windy City Winters. (We met at Filter.)

Courtney told me that she has a chronic gastrointestinal disorder. She’s not well, unfortunately. So she uses her art to explore her insides; to investigate what makes her ill. In this series, she’s used Deer guts as a stand-in for human innards, but does it really matter?

I met Katty Hoover at Review Santa Fe in June, alongside the rest of the ladies we’ll feature. She’s based in Reno, NV, where she tells me they’ve already had a boatload of snow. (Go, El Niño, Go!) Katty is originally from Florida, which most people know is the craziest place on Earth. (Though Nevada is not far behind. Guess Katty goes for the weirdos.) Katty photographed in a nudist colony in the FLA, and there are most certainly a lot of penises on display. Should it be penii, I wonder?

Hye-Ryoung Min is a Korean artist based in New York City, married to a Guatemalan Jew. (Yes, it is the 21st Century.) She travels back and forth between the two countries, which seem so different, on the surface. Her solution was to create a hybrid of her two worlds: Seoul and the NYC. These photos are composites, though you’d be hard pressed to find any seams. She’s made her own digital homeland, which represents neither, and both, of her selves.

Next we’ve got Jessica Martinez, who’s currently studying at Syracuse University. She’s originally from South Central LA, so I’m guessing like Courtney, she must be pretty sad once the gray skies roll into Upstate New York. (Cold. Gray. Monotonous. No thank you.) Jessica’s pictures, which she was uncomfortable showing here, depict a playful but twisted take on sexuality and identity.

Lots of people use those words, I know. They’re buzz terms in the art world, and always will be. But you show me another series with chicken feet on a naked back, and kittens in someone’s mesh under-pants, and then we’ll talk about whether she’s an original or not.

I’ve already written about Yvette Marie Dostatni for another publication which we shall not name. But from the moment I saw her project “The Conventioneers” in Santa Fe, I knew I had to have the jpegs for PQ.

They combine humor, pathos, irreverence, wit, and curiosity at humanity’s foibles, and I couldn’t get enough. That Yvette is an open-hearted Chicago girl that you can’t not love…had nothing to do with my ebullience. This work rocks.

Last, but of course not least, we’ve got Svetlana Bailey, who was born in Russia, raised in Germany, and then lived for years in Australia. Got that? Now, she’s studying at RISD in Providence, RI.

These pictures don’t make a lot of sense to me. I actually had trouble reading the first picture or two she showed me, and I rarely get fooled. I thought I was looking at digital composites, but Svetlana assured me they were all straight photographs.

These window displays and quick street scenes are so strange, but I can’t my finger on why. That’s the reason ambiguity never goes out of style in art photography. Always leaving them guessing…

The Art of the Personal Project: Erik Goldstein