I used to be overweight as a kid.

Not always, but often. I would gain and lose weight, in phases, but I never had a perfect body.

Hell, at my wedding, I must have weighed 20 pounds more than I do now, courtesy of Tony’s Pizza in East Williamsburg, Brooklyn.

“Hi, I’d like to order a large grandpa pizza for delivery please.”

Do that every Friday for six months, and you too can pack on the pounds. The aftermath might not be pretty, but damn, that shit tastes good.

All kidding aside, any discussion of the concurrent obesity and diabetes epidemics in the United States is likely to be fraught. It almost perfectly pits the personal against the societal, and that’s not a battle that can be won.

In one corner, we have identity politics and issues around body shaming. Who are you to tell me how I should look? Or to judge me because of how much I weigh? It’s discrimination, it’s wrong, and you are an asshole for even thinking that my body is your business.

In the opposite corner, we have a genuine public health crisis, with millions of people eating themselves into disease. Why that happens is related to poverty, culture, access to healthy food, cooking knowledge, government subsidies for corn production, and the insidious advertising and food science efforts put forth by large multinational corporations peddling crap food.

Like I said, this issue is a field of quicksand suspended above a Florida-sink-hole. (Good intentions get sucked down faster than a shrimp-head at a Louisiana crawfish boil.)

Enter Art into the discussion, a notoriously subjective product that revels in ambiguity, and you’re guaranteed to draw some attention. And so it has been, for three projects I’ve noticed over the last few years.

Jen Davis, and then Samantha Geballe, have both photographed their large bodies in a self-portraiture format. Ms. Davis, whose work I saw at the Library of Congress, and wrote about, uses color. Samantha, whom I met at the Medium Festival a couple of years ago, and also wrote about, prefers black and white.

They both made striking, uncomfortable, compelling images of their own bodies. They stood in for the masses with weight issues and said, “Here I am. Look! Don’t avert your gaze. I am worthy of your attention, every bit as much as a skinny model with vapid eyes!”

Both artists subsequently underwent gastro-bypass surgery. (How’s that for ambiguity?)

I’m not sure about Ms. Davis, but Samantha has also documented her new body, and the vestiges of her old one. The pictures are great, and will be on display at the Houston Center of Photography from May 13-June 10.

There is one other artist I know of working with these themes: Haley Morris-Cafiero. I heard about her project, “Weight Watchers,” but as sometimes happens, I knew of it, saw tweets about it, but never caught the pictures themselves, beyond a social media thumbnail. (The iconic pic of her walking on the beach.)

A few weeks ago, a respected colleague wrote to see if Ms. Morris-Cafiero could send me a book for a potential review.

I said sure, as I always do, with the caveat that I never know what I’ll review until I pick it up. This one, most definitely, is worth discussing here.

So let’s get on with it.

“The Watchers,” published by the Magenta Foundation, is a book that grabs you from the cover, quite literally. There are words embossed into the white rubber/plastic coating, and red text leaps off in the other direction. The words seem to come from comments about the project, and are a little incendiary.

(Sample: “You are courageous. You rule. Fuck everyone.”)

The overall design is excellent, as the red text on white returns again and again, as Internet comments are juxtaposed against each other. Negative trolls on the left hand side, positive supporters on the right. According to this format, this artist seems to summon wrath and kindness in equal measure.

But what does she do? What is her take on this very tricky subject?

Well, near as I can tell, she walks or stands around, while an assistant waits to snap the shutter the second someone looks askance at Ms. Morris-Cafiero.

Really, that’s the gist of it.

Ms. Morris-Cafiero, who is overweight, stands around by the side of a walkway, or in Times Square, or under the Eiffel Tower, and the camera-person captures people who look at her.

The obvious message is that people are put off by her body, which is often visible, as she wears bathing suits or workout clothes. The picture quality is good-but-not-amazing, as it seems as if these were snapped with a compact point and shoot camera, or maybe a digital SLR?

Things like light quality, color palette, and formal compositions are understated, I gather, to enhance the feeling of reality as it happens. But by gutting the efforts of technique, it puts a lot of pressure on content.

This is obviously a very smart idea, but I’m not sure it stands up to deeper scrutiny. There are several images in which passersby shoot Ms. Morris-Cafiero some serious shade; pictures in which you can tell that random strangers are being rude.

But there are other images in which the strangers’ intentions are much less clear. A sideways glance is not an indictment of someone else’s character.

Furthermore, in many of the set-ups, Ms. Morris-Cafiero adopts very noticeable body positions. Her feet are splayed, or she looks confused, or dazed. Then there are the pictures in which she is holding a map, and looking confused, which will certainly draw the attention of many a person walking down a city street.

Despite the fact that I’ve already admitted this is a complicated subject, I’ll openly state that people who body-shame, or mad-dog someone else just because of how much they weigh?

Those people are dickheads.

There.
I said it.

But just because it happens to Haley Morris-Cafiero does not mean that I have to love her art project. Especially as I’ve seen, and written about, other projects that deal better in nuance.

This feels more like a Jackass outtake, to me. It’s clever, original, and clearly means well. I get the ideas it wants me to get. So it’s successful in that regard.

Maybe it’s even intentional? A viral-esque style for a project that was always going to go viral?

But it also feels like it’s taking advantage of some of the strangers, judging them the way Ms. Morris-Cafiero feels judged. I was inclined to like this project, but came away feeling unsure.

Or maybe it’s just that by making it a book, she included images that don’t support her message? Too many pictures made me think: “That’s not a dirty look. That’s just someone turning his/her head.”

What this book did is put me in an uncomfortable place, and I think that’s a big part of its allure. (Structural metaphor, anyone?) Do anything other than lavish praise, and I set myself up to be accused of being disrespectful, or biased. As I’ve written at length about so many difficult issues over the years, I’m clearly not afraid to offend.

So let me end thusly: This is a very interesting, edgy book, that draws attention to a murky, difficult subject. I think this artist has done something smart, if flawed, and I look forward to seeing what comes next.

To Purchase “The Watchers” Visit Photo-Eye 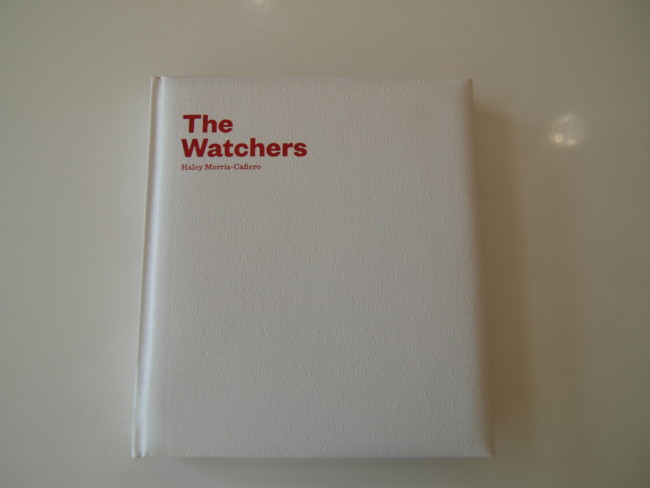 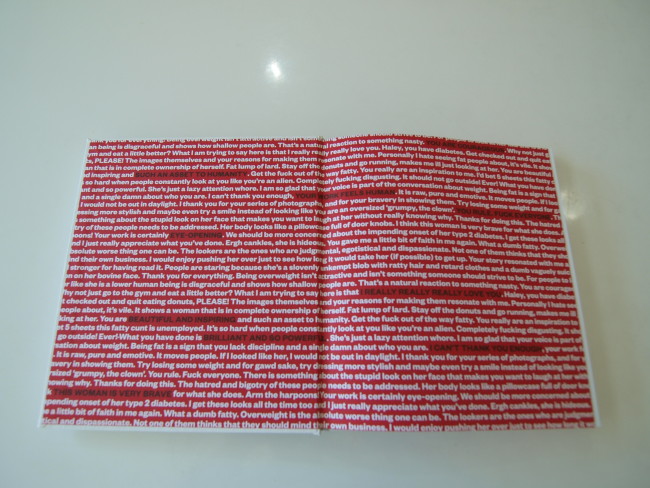 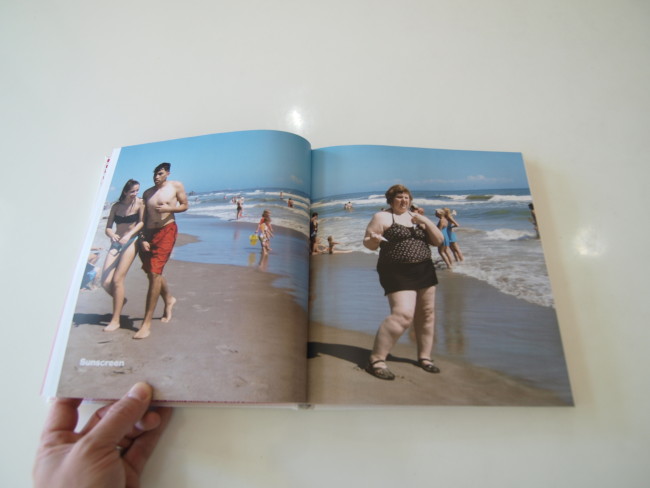 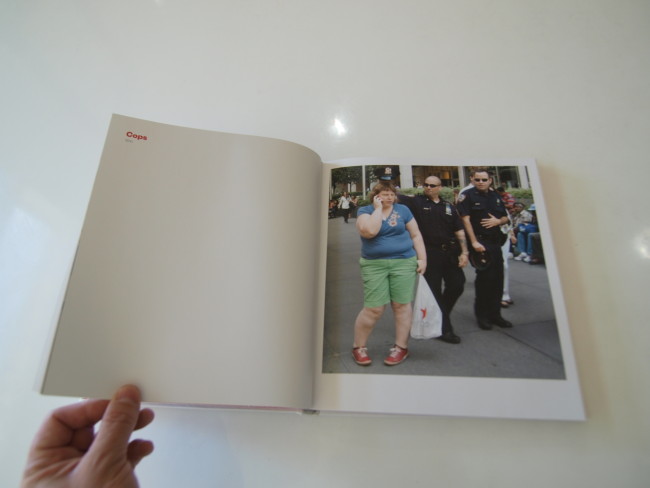 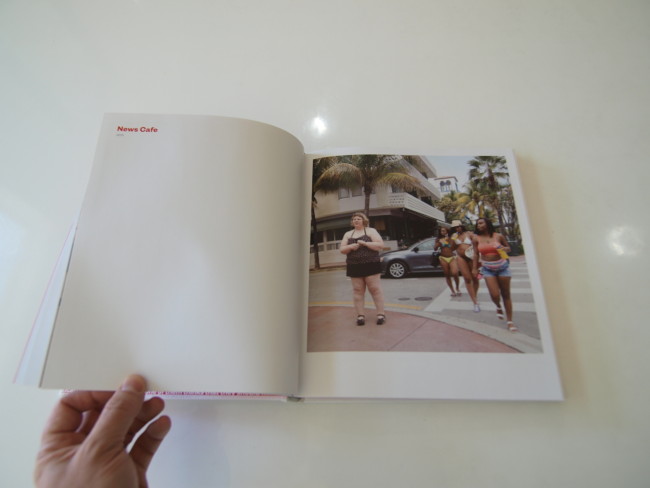 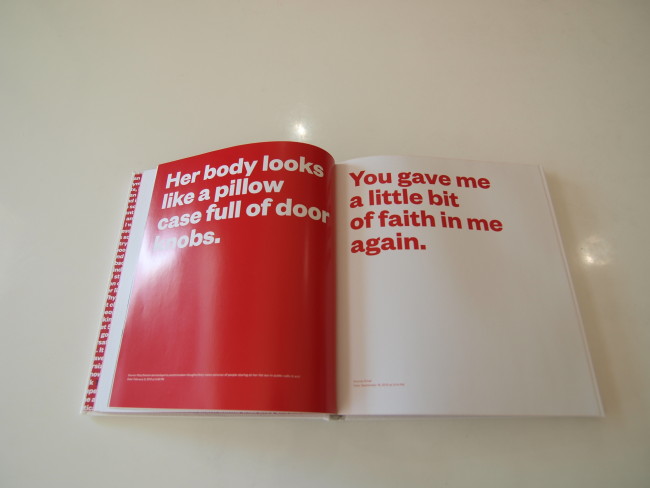 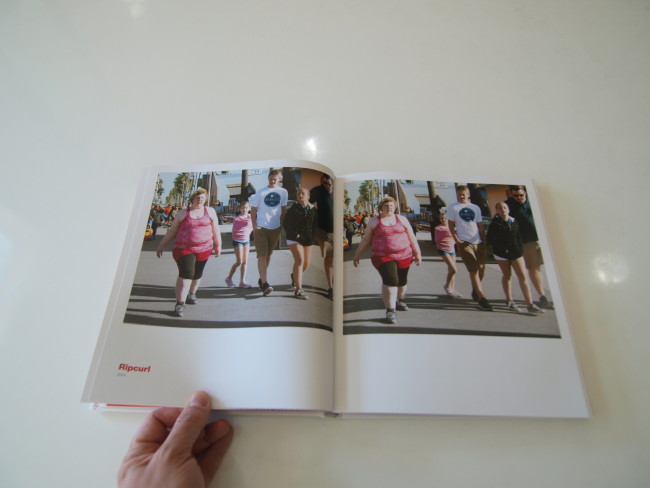 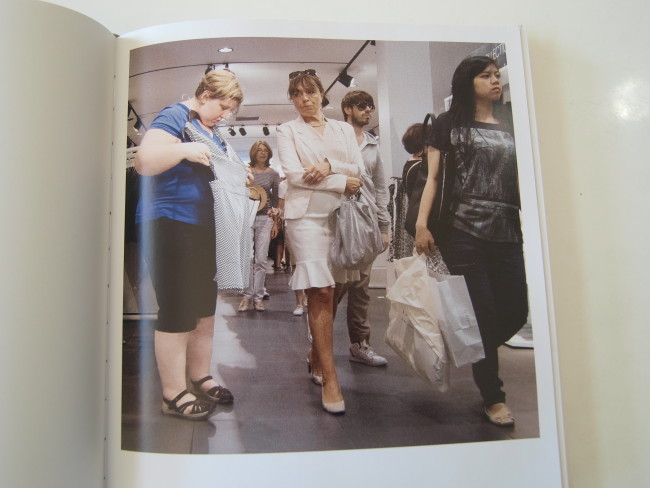 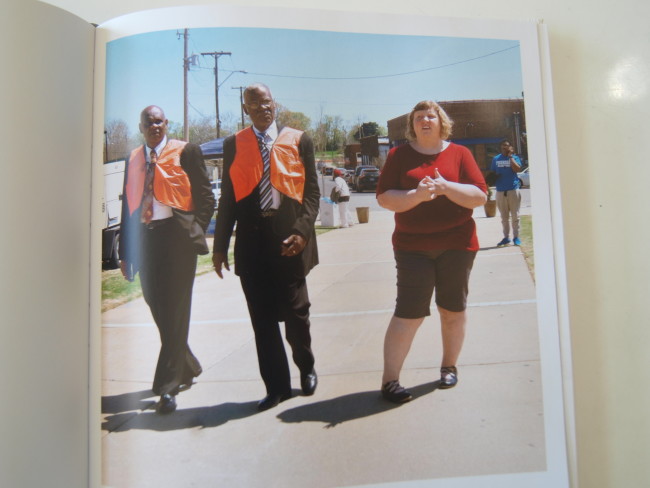 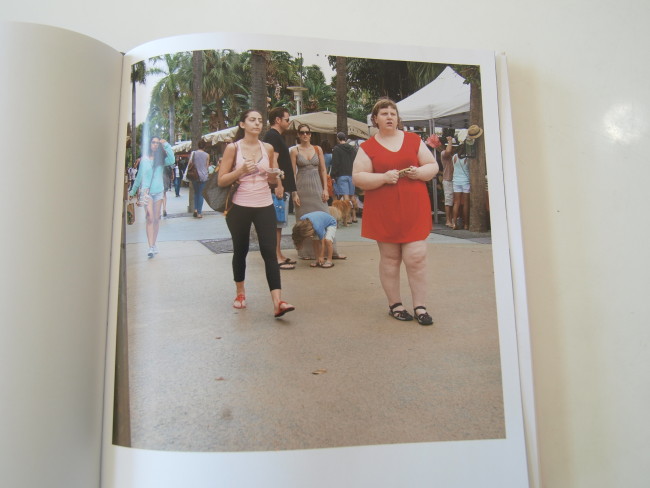 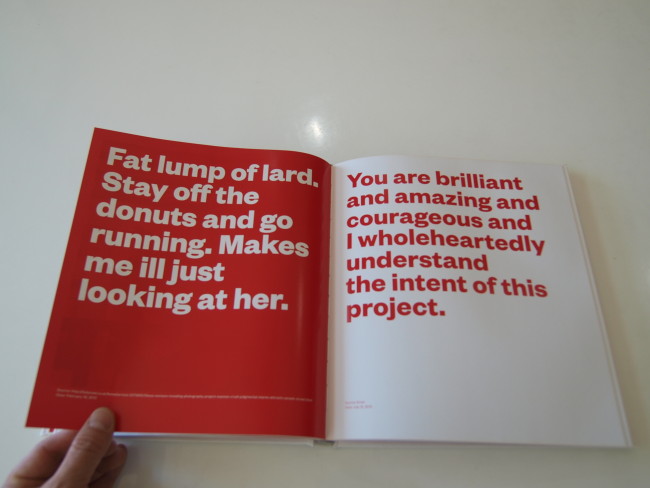 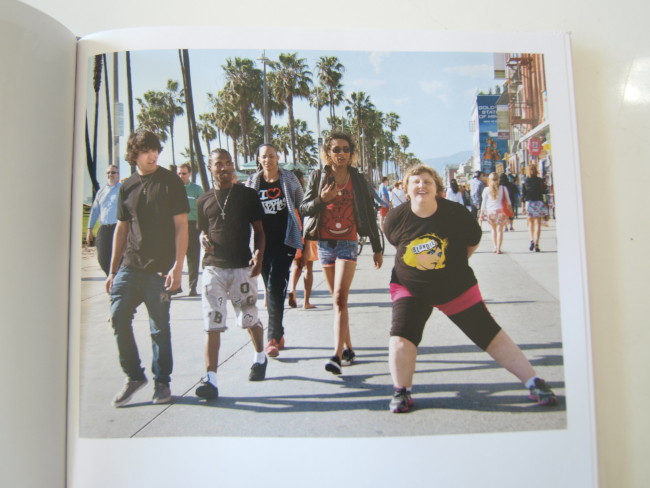 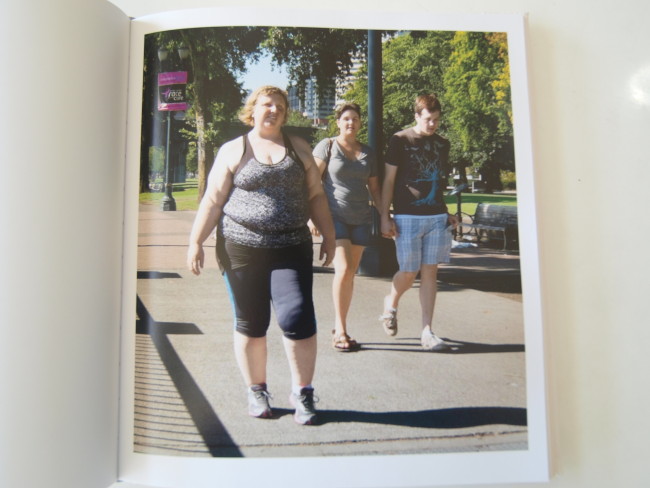 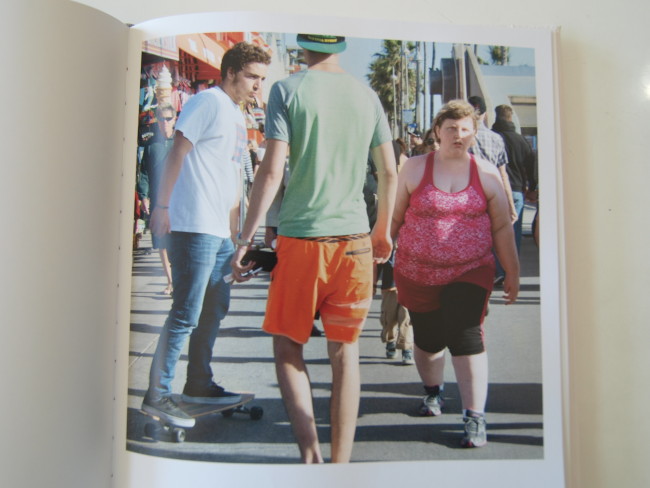 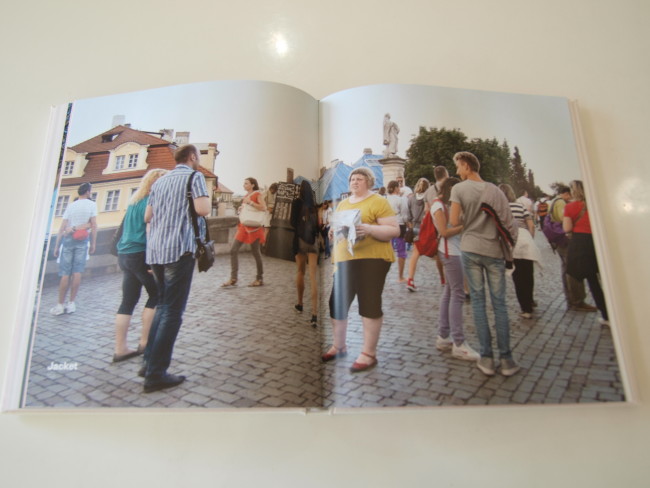 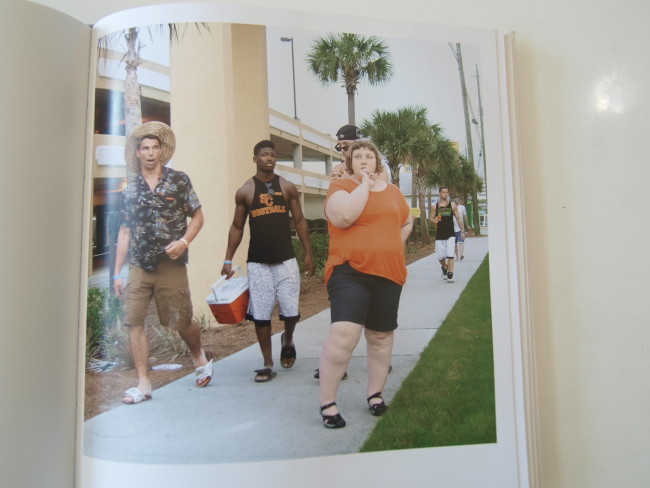 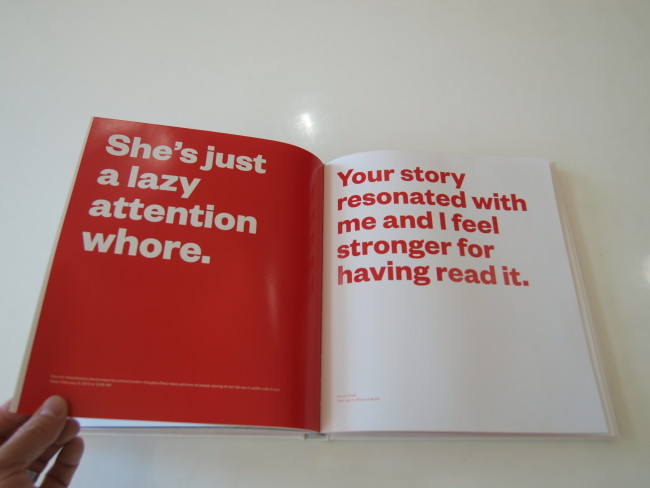 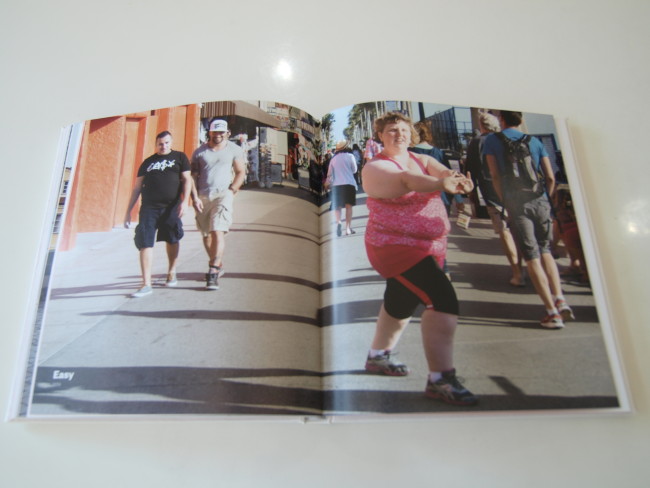 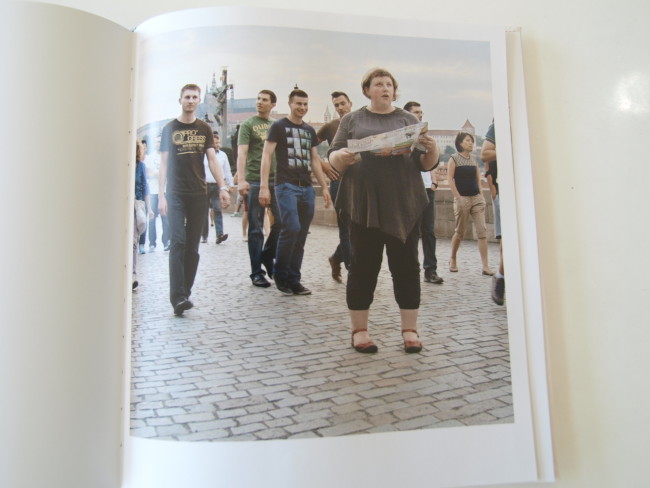 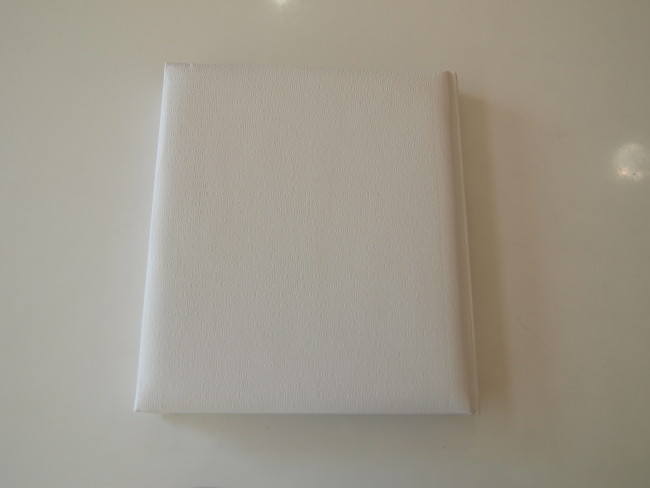 The Art of the Personal Project: Hollis Bennett