I’ve got Boston on the brain at the moment.
Why, you ask?

I caught “The Departed” on cable over the holiday weekend. It’s one of those movies that’s better the second time you see it, though I don’t know why that is. Matt Damon, God bless him, rocks the thick Southie accent like the pro that he is.

Jack Nicholson, however, doesn’t even bother trying. One out of every 25 words has a half-accent, but that’s about it. Still, given his massive JACK charisma, I really didn’t mind. I always thought this was a minor Scorsese film, and it may well be. But when Martin Sheen, Alec Baldwin, Damon, Nicholson, Vera Farmiga and Leonardo DiCaprio are giving excellent performances, I’d be a fool to dismiss it.

Then, the next day, I was leafing through a copy of The New Yorker, and began to read a piece about the Salem witch trials, from the late 17th Century. It’s an engrossing article, as they always are, but I was stopped cold by a period map, showing the entirety of the Massachusetts Bay Colony.

At one point, it was “The Frontier.” Hard to believe nowadays, as highways tie those places together tighter than a courtesan’s corset.

History is always less-popular than entertainment, but in this case, the strands wrapped around each other, like a helix, and encouraged me to speculate. Why did all those Pilgrims emigrate, given the almost psychotic odds stacked against them?

Because they wanted a better life.

Were the current occupants of the Continent happy to see them? No, they were not. (Understandable, given the subsequent Genocide.)

It seems that’s always the case with immigrants, though. No matter how pressing their case, locals wish the newcomers would just keep moving along. How else to explain the crisis enveloping Europe at the moment?

Could any group of people have a more valid reason for fleeing than the Syrians? These poor folks are literally stuck between Bashar Al-Assad, and ISIS. The former used to be the worst person in the world, but somehow, ISIS managed to top it. Those that stay behind face the tragic risk of a painful death.

But many Europeans, fearful for their jobs and economic security, would just as soon see people beheaded. It’s mind-boggling, but there you are. People have no choice but to leave, yet they’re unwelcome where they’re headed.

Frankly, it makes me think of the Tsarnaev brothers. Remember them? How were they treated in Massachusetts, I wonder? I wrote a piece in 2013, admitting my guilt at feeling a touch of empathy for young Dzhokhar. He seemed like a dumb kid caught up in a horrific world of someone else’s making.

Were these immigrants embraced by their new community, or shunned? Does it even matter? Nothing can excuse the mayhem and misery they unleashed, but still. I’d love to know how it all went down.

That’s impossible, I’m afraid. But what of the aftermath? The shutdown of Boston? The massive manhunt? What must that have looked like?

Finally, a question I can answer without resorting to another question. I need not imagine the manhunt that ultimately found Dzhokhar, as I’ve just finished looking at “Lockdown Archive,” a new book by Mike Mandel & Chantel Zakari, recently put out by 18 publications. (Though apparently printed by Blurb.)

We always make our way back to book, don’t we?

While I’m unfamiliar with Chantal Zakari, I know Mike Mandel from his famous Photo World Baseball card series, which I wrote about in a review of Pier 24 a few years back, and his seminal project re-contextualizing found imagery with his partner, the late Larry Sultan. (That was one long sentence. Apologies.)

That knowledge helped me appreciate this fascinating and genuinely impressive book, assuming images were found, not taken. The volume is broken down into small sections, all of which purport to show what was happening in Watertown, MA, on April 19, 2013, the date of the big manhunt.

As the premise of a lockdown means the artists couldn’t have been out and about, making images, I guessed that the pictures within were taken from the Internet, TV, and other media sources. The end notes confirm as much.

Which means that no living soul saw, with his or her own eyes, the entirety of the situation as we see in this book. Gray teams, black teams, swat teams, helicopters. It’s all here.

Evacuations. Press conferences. Rolling Hummers. Sad children. An African-American man, in a classy hat, with his hands up at gunpoint. Bullet holes and screened-in-porches and Red Sox gear.

The end notes also tell us that so many law enforcement officers showed up to help, uninvited, that the entire endeavor was a logistical nightmare. It was almost like a Wild West posse formed, just to make sure that a bleeding 19 year old boy had nowhere to hide.

Ironically, it was only after the lockdown was lifted that a resident was able to go outside, notice his boat had been invaded, and call in the big guns.

We all know what happened next.

My favorite part of this job is looking at books that show me things I’ve never seen before. I drop that standard on you all the time, because the more I see, the harder it is to accomplish the goal.

This week, we have something that none of us has seen before. So I trust you’ll be satisfied. (At least I hope so.) 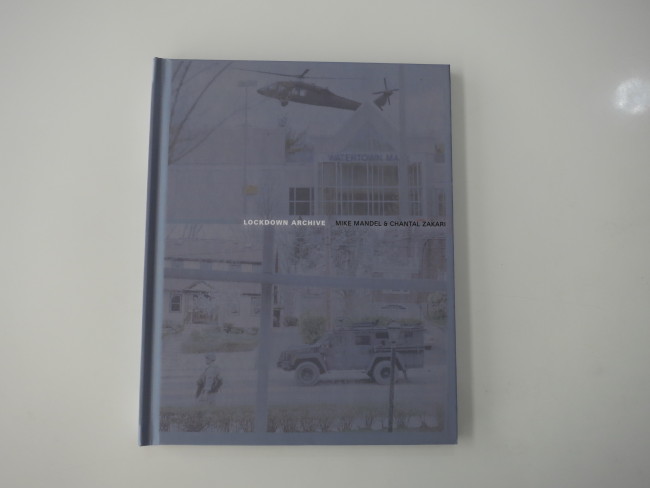 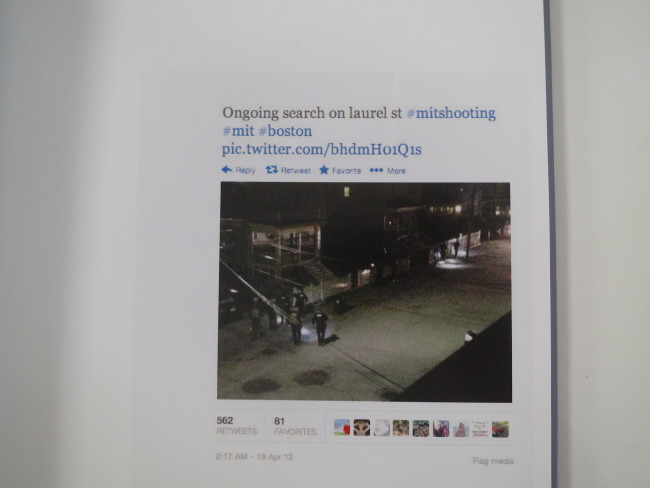 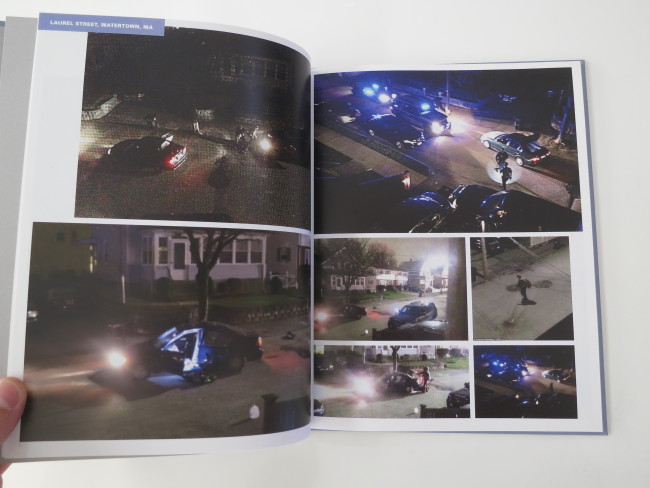 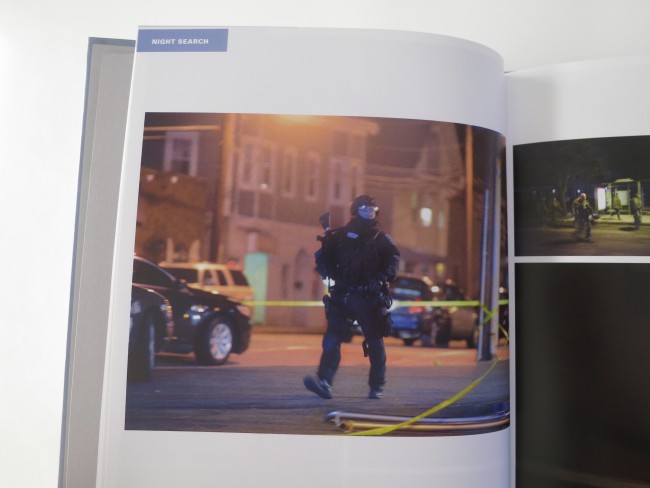 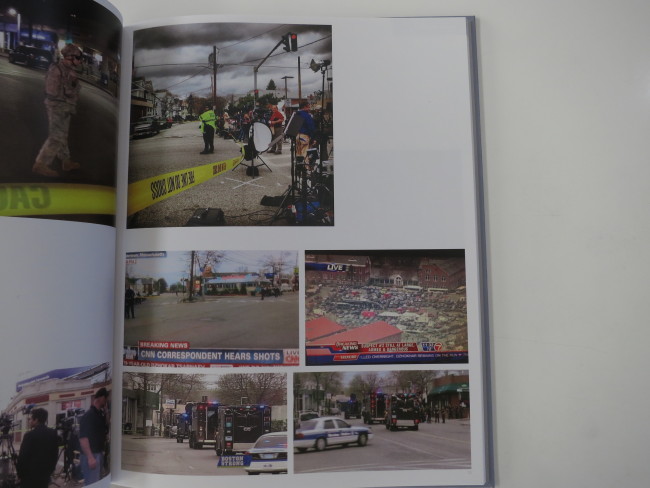 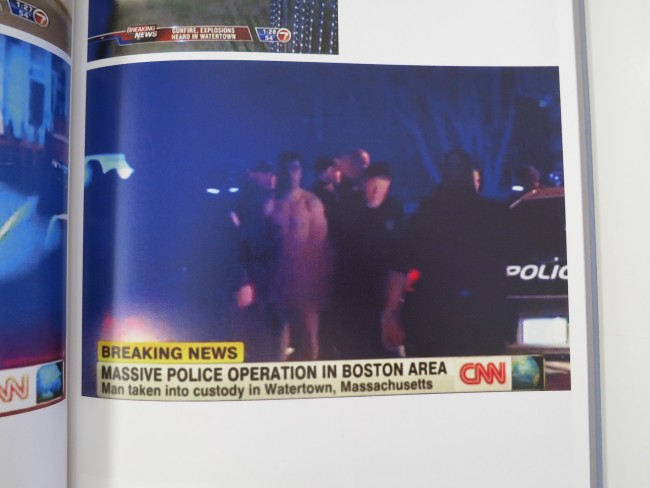 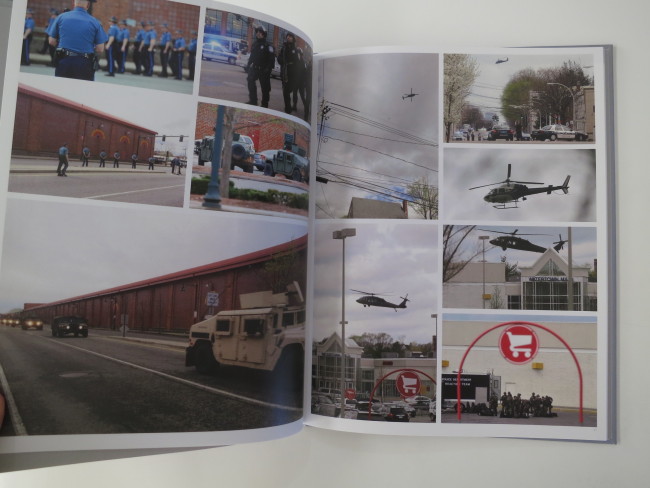 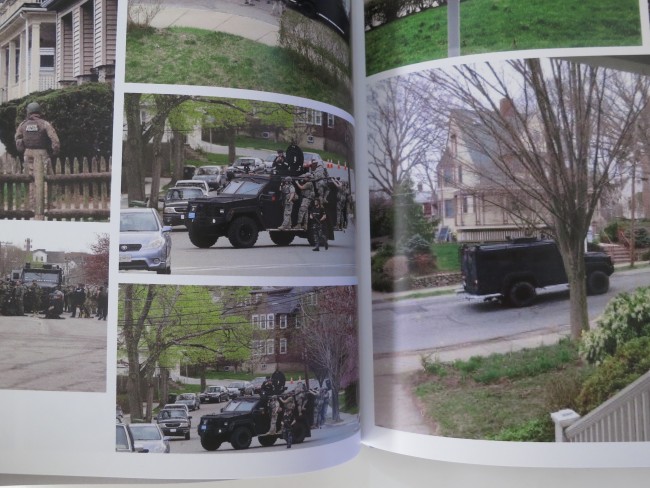 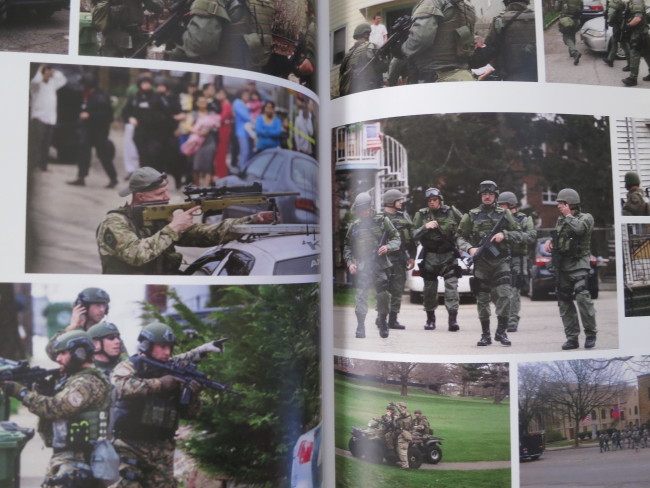 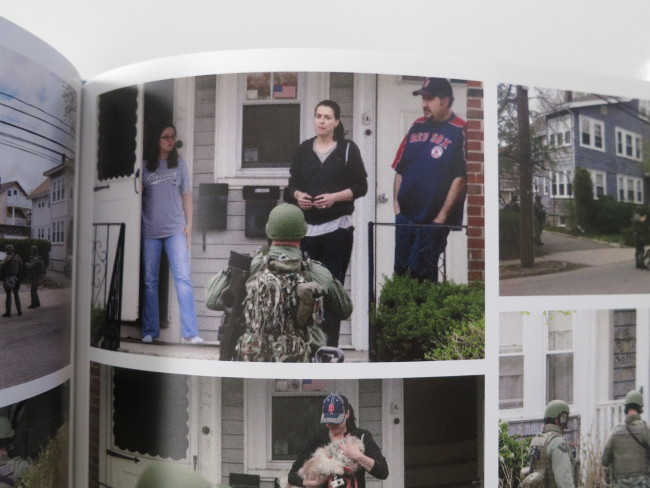 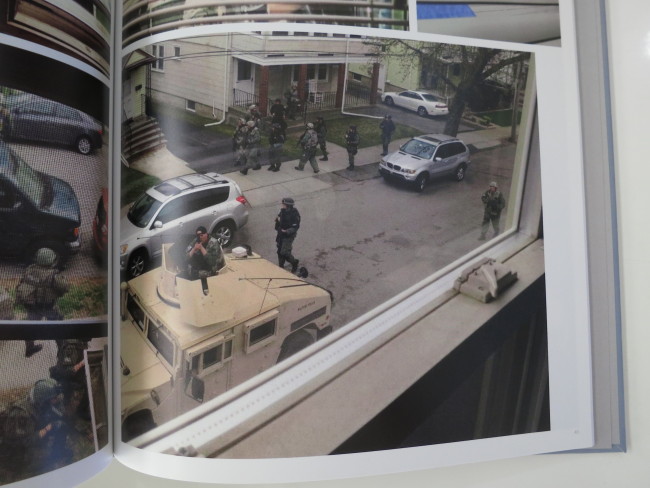 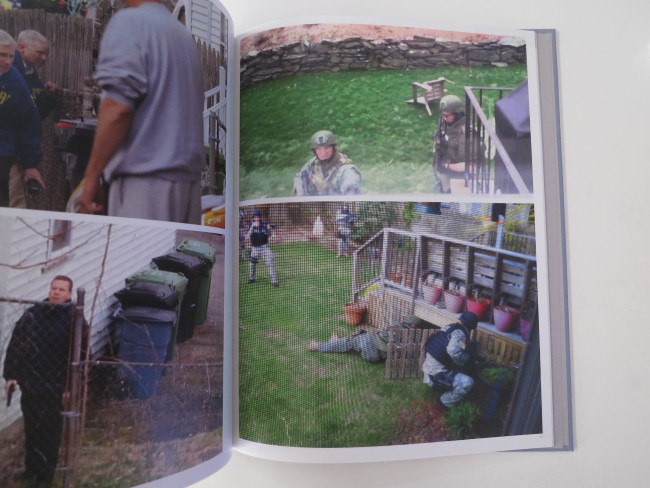 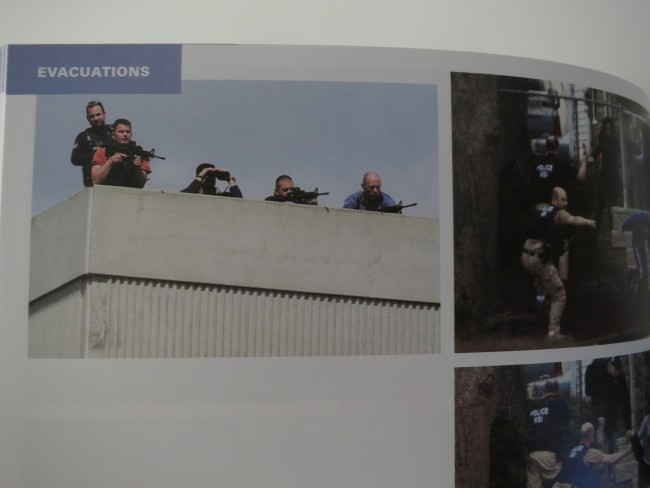 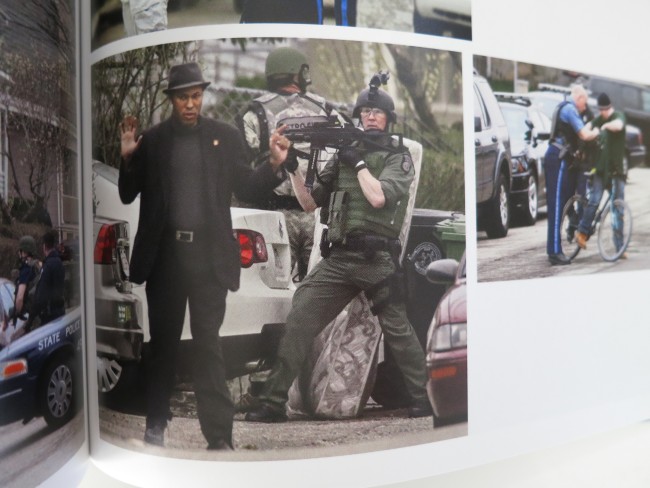 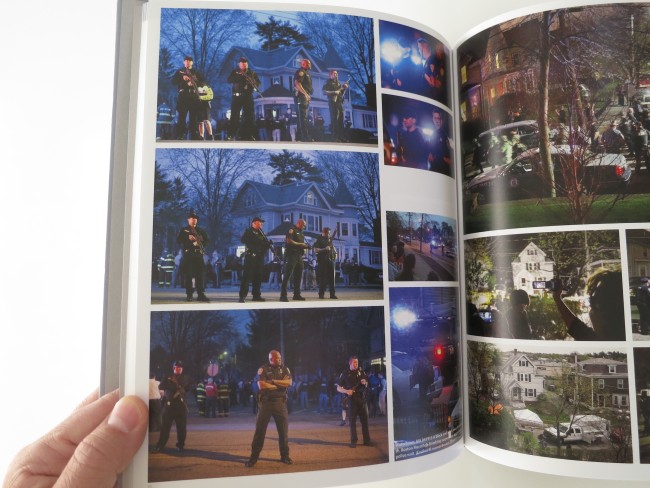 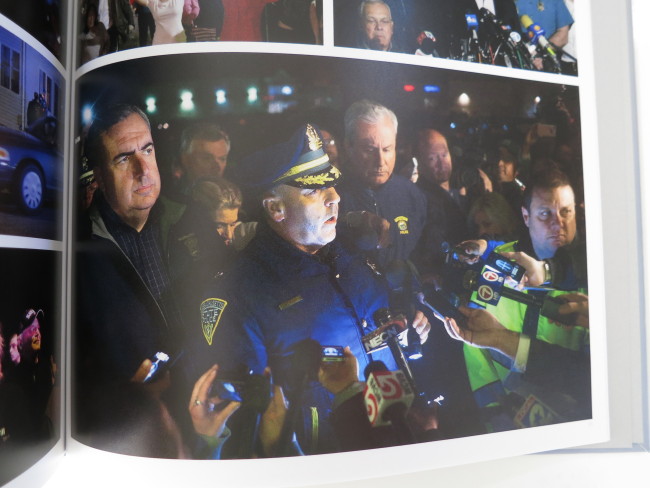 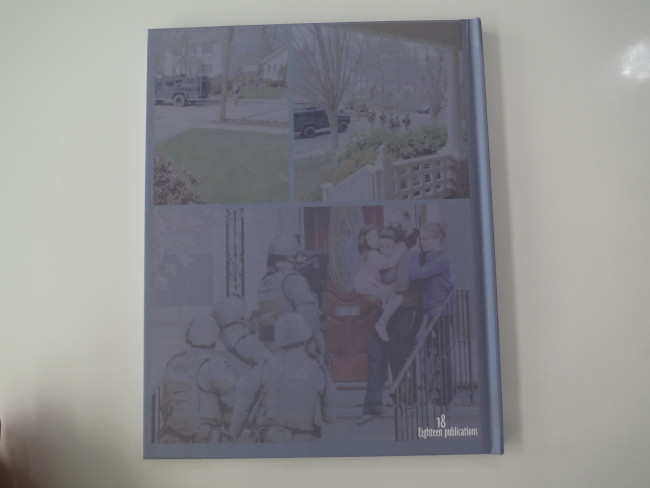 The Art of the Personal Project: Stephanie Diani