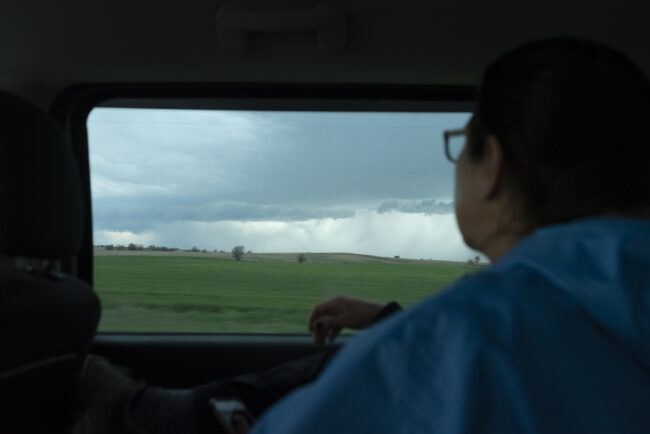 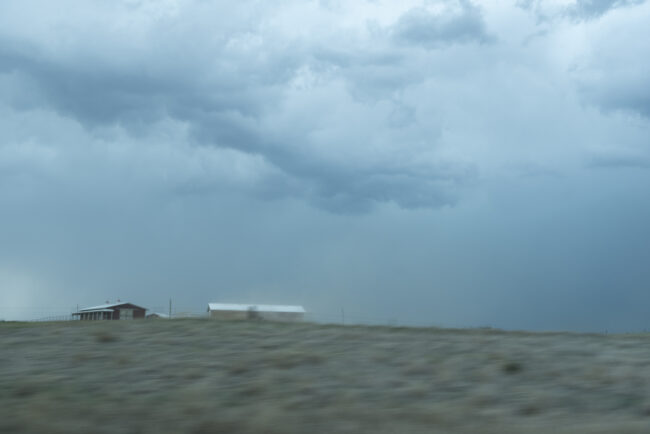 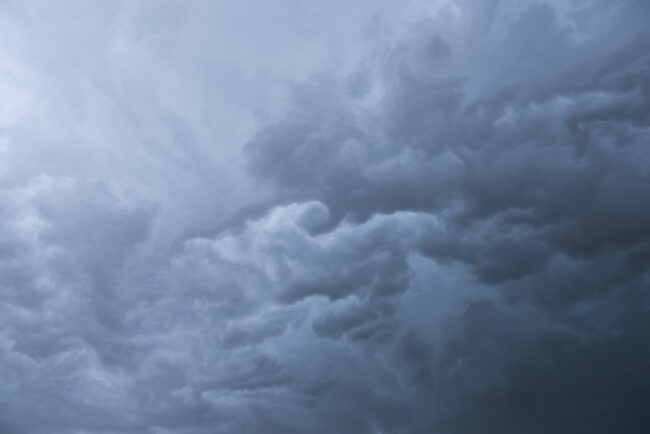 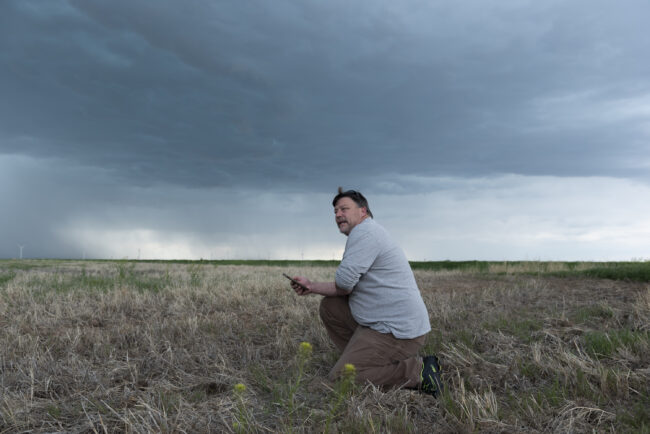 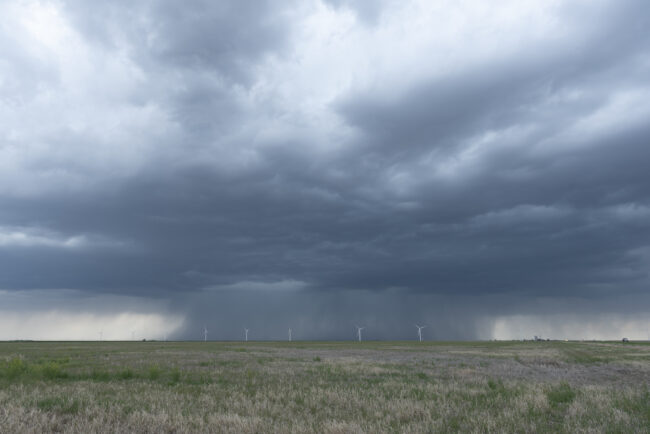 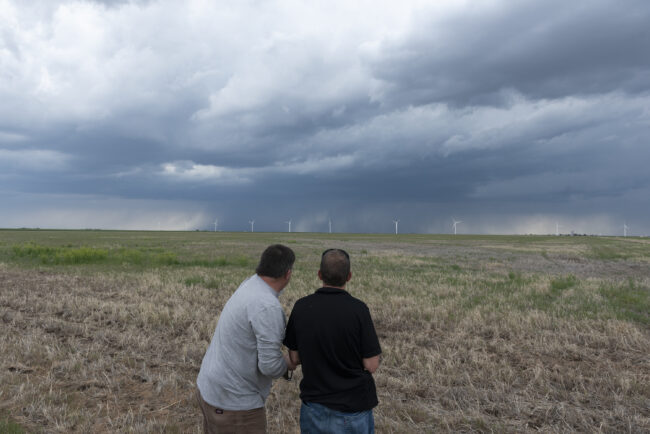 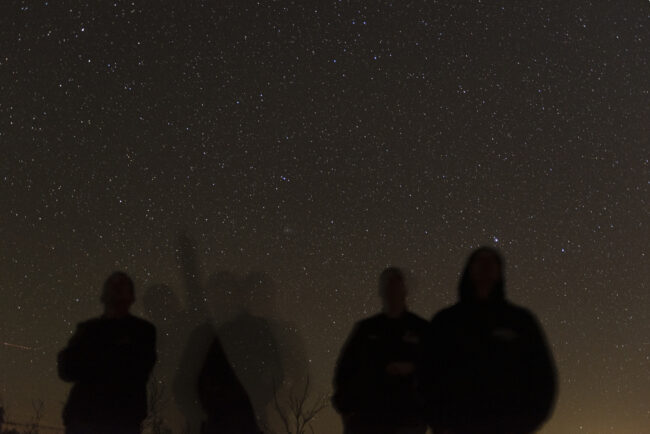 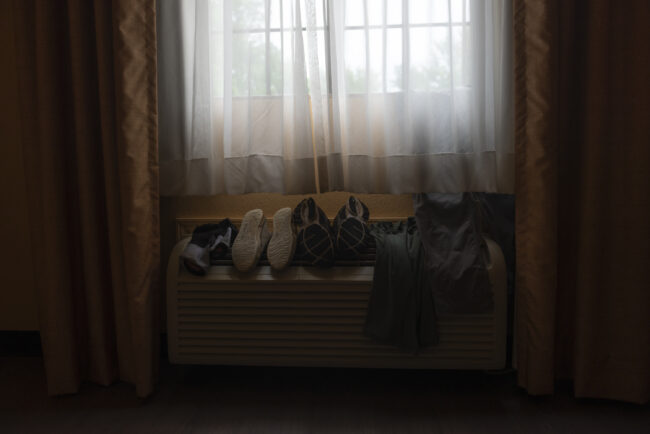 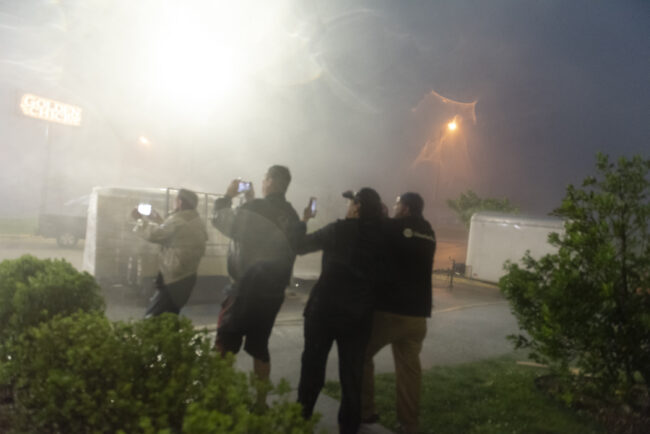 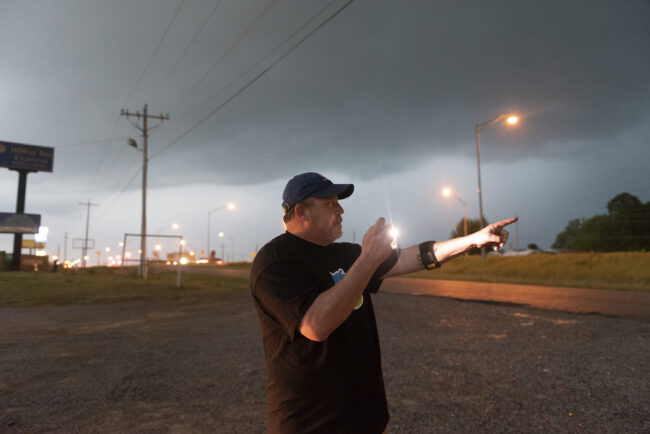 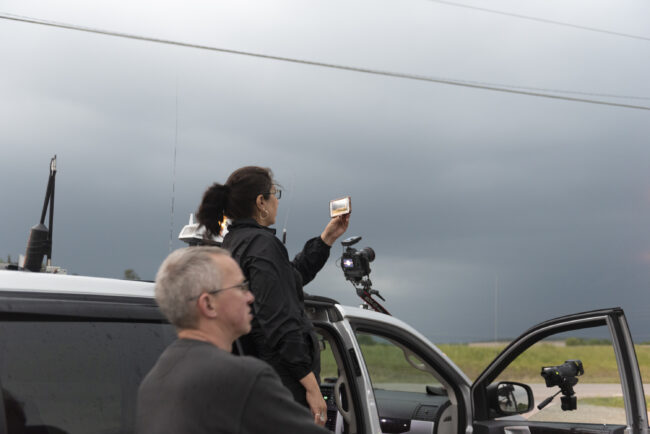 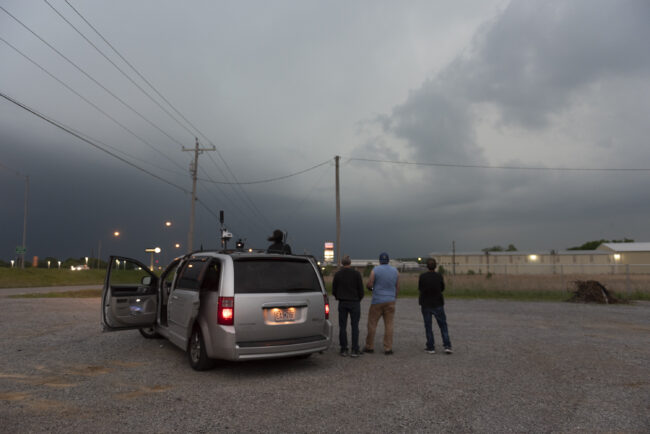 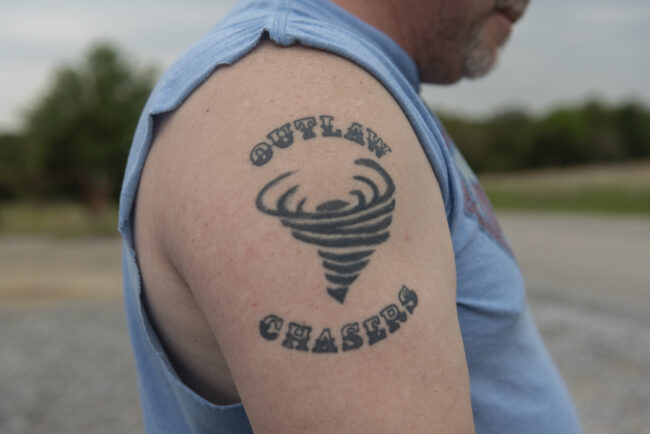 Heidi: How did this assignment with GEO come about?
Laure: I pitched a story idea about storm chasing to GEO in December and this reporting trip happened in May of 2021, which is the beginning of the chasing season in the Tornado Alley. The magazine was interested in the idea of extreme tourism but also intrigued by the environmental aspect of the story, as storm chasers often contribute to field research around tornadoes and their behaviors. There is a lot of unknown when working on such a story. I couldn’t really tell my editors beforehand where we would go, what kind of landscapes to expect, because there is no set route and we would just follow the weather. Although we all hoped I would get to witness a tornado, nothing was certain. Pretty early on, we decided to make this a first-person story about the experience itself: my editors told me to photograph the waiting as much as the thrills, and to take a lot of notes about smells, varying temperatures, whether the air felt humid or dry, in order for my captions to convey a sensory experience.

Did they introduce you to the meteorologists?
I did some research online and had multiple phone conversations with several meteorologists before I decided to travel with Lanny Dean, a 46 years old storm chaser from Oklahoma. He was experienced (he had already witnessed about 600 tornadoes when I met him), good at explaining the scientific side of his job and importantly, he really was a character. He usually only takes 3-4 guests at a time and likes to get to know them really well, so I thought I would be able to tell his personal story and also understand why his guests were fascinated by storms to the point of dedicating their only annual vacation to chase them.

How long was this assignment?
The tour itself was a week long so my total traveling time from California was around ten days. I initially thought of this as a one-off assignment but it may become part of a long term project about alternative ways to experience the wilderness.

How did you earn their trust?
We drove about 1700 miles together, so it gives you quite a bit of time to chat. There were two storm chasers, Lanny Dean and Tyler Schlitt, their three guests, and me. We would share meals, stretch our legs together at every gas station. We tried to laugh together at our own disappointment when a gigantic supercell turned into nothing before our eyes, or when we failed to see a rare cold-air funnel cloud because it took us to long to get out of the van. When we experienced our first tornado from up close, in McAlester, Oklahoma, it created a deep bond between the other guests and I. It was a dream for them and I was there to see it fulfilled. There was a lot of joy but also an element of fear. It is a very unique experience to share with someone.

How did the project inform your photography moving forward?
This project encouraged me to pay more attention to the quiet moments when I photograph. I knew a lot of talented and fierce photographers had already captured the tornadoes in a way I wouldn’t be able to achieve with no previous chasing experience and with so little time. My editors at GEO wanted me to convey the internal feeling of searching for the tornadoes and to give a glimpse of the other side of storm chasing: it’s not always glamorous!

I know you recently finish the program at ICP, what are your future photo goals?
I just moved back to San Francisco after I graduated from the documentary photography program at the International Center of Photography in New York City. I am hoping to find a balance between doing assignment work and developing long term projects. I am mostly interested in stories about the environment, health and aging, and the exploration of alternative lifestyles. I am currently preparing for two exhibitions in the Fall, at the Encontros da Imagem photo festival in Braga, Portugal, and at the Festival for Ethical Photography in Lodi, Italy. I am very excited to explore different spaces where my projects can live: in magazines, on social media, on gallery walls and in public spaces. It gives me the opportunity to work with a variety of editors that often have very different perspectives on my work, which makes it a very good learning experience. 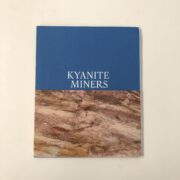 This Week in Photography: City vs Country