This Week in Photography: Riders on the Storm

I’m binge-watching “Power” at the moment.

(Season 6, the last of the original series, before it begat 3 spinoffs.)

What brought me to this moment, (having now invested countless hours in a televised story,) is a classic case of Capitalism, straight out of one of my Economics textbooks at Duke University, back in the day.

They even have a name for it: the drug-dealer model.

Give someone a free sample of a (potentially) addictive product, and you may have yourself a customer for life.

The tactic is so good, it even works on people who know the potential risk.

In my case, a few weeks ago, I realized a new season of “Outlander” had come and gone, which meant I could probably watch it with a free week of Starz, courtesy of Amazon Prime.

(The world knows no better Capitalist than Future-Emperor Jeffrey Bezos.)

Now, in admitting I like “Outlander,” I’m outing myself as a sucker for high-quality-production values, and solid acting, in an immersive, period show, featuring great-looking leads with cool accents.

But even if you take out the period element, (I majored in History as well as Economics in college,) if a show is truly immersive, and does a deep-dive into a subculture that teaches me about the world, I’ll probably get hooked.

So after I finished “Outlander,” knowing full-well I might risk overstaying my free week, I jumped into “Power” through the backdoor.

I began with a 2022 Spinoff, “Power Book IV: Force,” because I thought Joseph Sikora did a great job in “Ozark,” and his face was on the photo/graphic advertising the show.

Set in Chicago, it’s only one season, so I was quickly ready for “Power,” Season 1, the NYC-based OG of the Power-Verse, (produced by low-key, mega-mogul 50 Cent,) and it’s been living in my brain ever since.

Do you want to know their trick?

Drop the viewer into the middle of an ongoing story.

Whatever semblance of stability might have existed with the main characters, as the series begins, interrupt that status quo with some SERIOUS drama.

And then… it never stops.

I’ve since learned that “Power” was one of the most highly watched shows in the history of Pay Cable, (or what used to be Pay Cable,) and I’m not surprised it spawned ongoing storytelling.

Once you have, (against all odds,) created rock-solid, original IP, that shit doesn’t EVER stop making money.

(It’s why we have Harry Potter theme parks.)

And even though “Stranger Things” and “The Boys” haven’t even ended their runs yet, deep down, we know we’ll be absorbing some version of that IP until we die.

Now, where was I?

As I watched “Power,” paying attention to the story-telling tricks, (including taboo-for-shock-value, to keep them hooked,) it made me think of one story-telling, IP-Empire in particular.

I was consistently reminded of “Sons of Anarchy” which I binge-watched on Netflix 4 or 5 years ago.

(Honestly, who can remember?)

SoA first taught me the cardinal rule of addictive television: Make crazy shit happen to your characters, ALWAYS, and then amp it up, CONSTANTLY.

If you never give the characters a minute to breathe, and are willing to put outer-edge violence and violation on-screen, with good actors in a fascinating sub-culture, you’re good to go.

“Sons of Anarchy,” created by Jersey Boy Kurt Sutter, was set in an Outlaw biker gang in Southern California.

I knew nothing about that world, but quickly learned some Outlaw Motorcycle Clubs function like Mexican drug cartels. (Who were also featured prominently in the show.)

Bit by bit, SoA shares a fictionalized version of the Biker-Gang-world, complete with its own lingo, and set of rituals.

To be clear, (as far as I know,) not all Motorcycle clubs are gangs, nor criminal organizations.

But some are, which means if you see a certain type of biker, with a certain type of cut, (or leather sleeveless vest,) and he comes up behind your car on his chopper, looking like a movie-bad-guy-henchman, well, you let that guy pass as soon as he wants to.

Which I did.
Yesterday.

As I drove my daughter to her summer camp, where she’d be playing a pirate in a local children’s production.

My daughter asked about the biker on the chopper, and even though she’s 9, it quickly led to a conversation about Capitalism, and the international market for illegal drugs, which is dominated by organized, criminal gangs in every country on Earth.

(I swear, that’s just how it happened.)

I told her how to read the Motorcycle club, and local chapter, from the guy’s cut, or sleeveless leather vest.

Then I said, because selling “drugs” was illegal, but people still wanted to buy them, someone always had, and always would, rise up to sell it to them.

(The concepts of Supply and Demand are the core of Economics.)

She asked about which countries had big Mafias, so we discussed Italy, Mexico, Russia, China, and how as far as I knew, the Yakuza mostly stayed in Japan.

All the while, the guy on the chopper was right in front of us, cruising the highway into Taos.

Out of nowhere, the dude had became an official “topic of discussion,” which lead to a chat about the Global Drug Economy, with an inquisitive 9-year-old.

I’m telling you, those bikers have a SERIOUS presence.

Photographer Nancy Baron, from Southern California, reached out a couple of weeks ago, and offered to send a little ‘Zine she’d just made.

From what I gathered, it had something to do with bikers on the highway.

“Riders on the Ten” opens with a backwards orientation, and while I did peek at the accompanying post-card, which told me where to be begin, the other side says “Do Not Enter/ Wrong Way,” so design-wise, it’s a nice clue.

(Score one point for Nancy Baron.)

The title makes me think of “Riders on the Storm,” by The Doors, so then I’ve got Jim Morrison in my head.

And I fucking love that song.

(Score another point for Nancy Baron.)

From there, after the opening paragraph, informing us it’s the road between LA and Palm Springs, what you see is what you get.

(The front cover is actually a portly guy in a funny-visor helmet, on a Vespa, which is funny, so one more point for Nancy.)

It’s such a cute, little ‘Zine.

None of the dudes is as menacing as the guy we saw here in New Mexico, but just as you’re settling in to the whimsy, we have a run of images where the riders start staring Nancy down.

It’s such a tonal change, you notice right away.

And loved it, as I write here, all the time, how much I enjoy a good change of pace, to help hold a viewer’s attention.

Just when I wondered how far she’d take the stare-down pictures, we get a photo of a cop, giving us the peace sign, and then the ‘Zine is done.

Which is more than I can say for this week’s column. 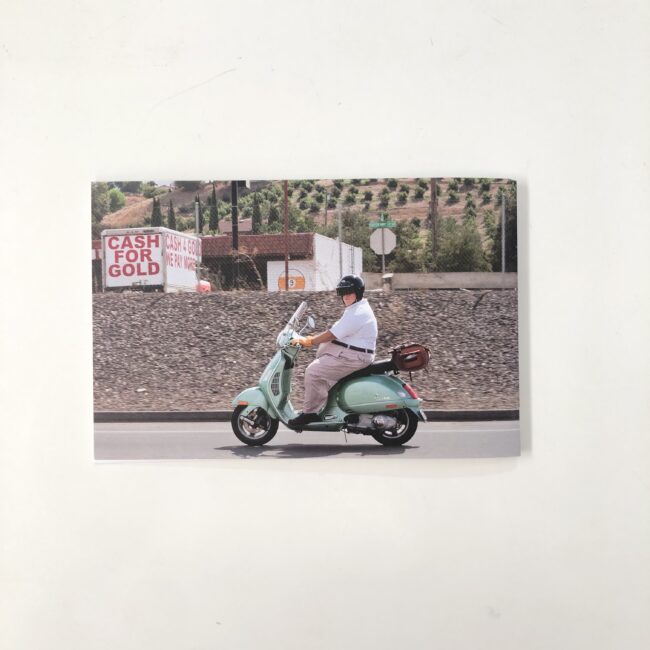 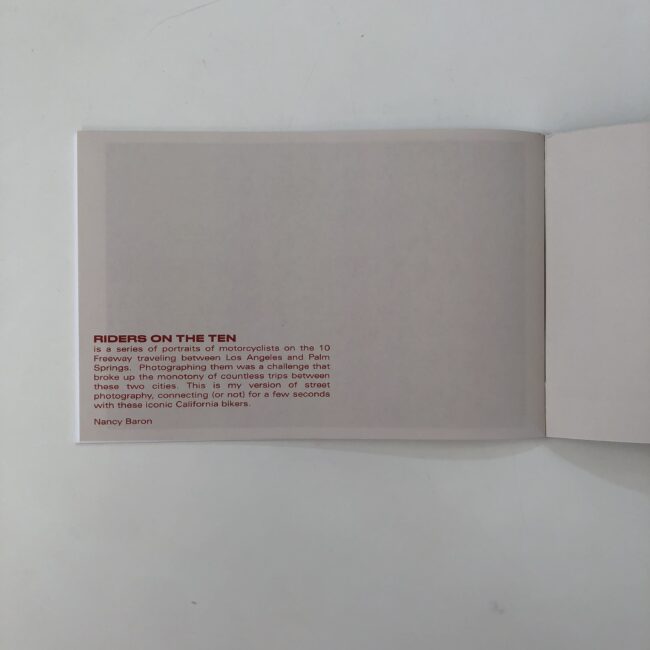 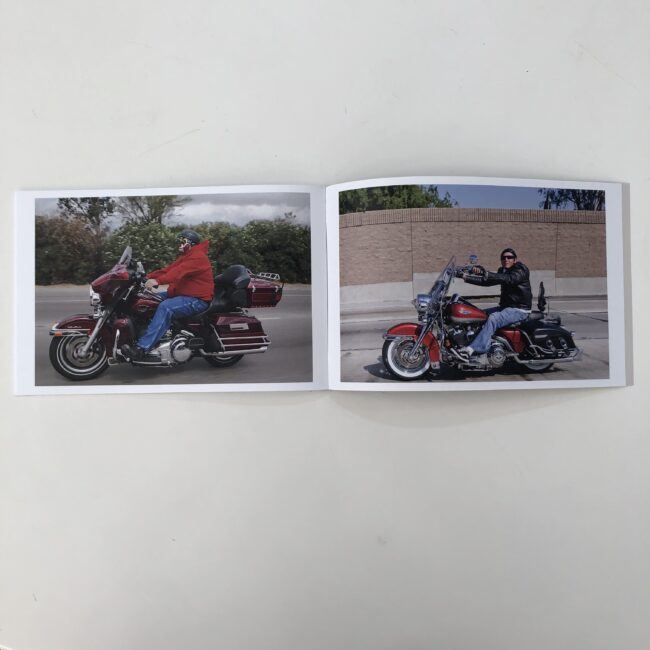 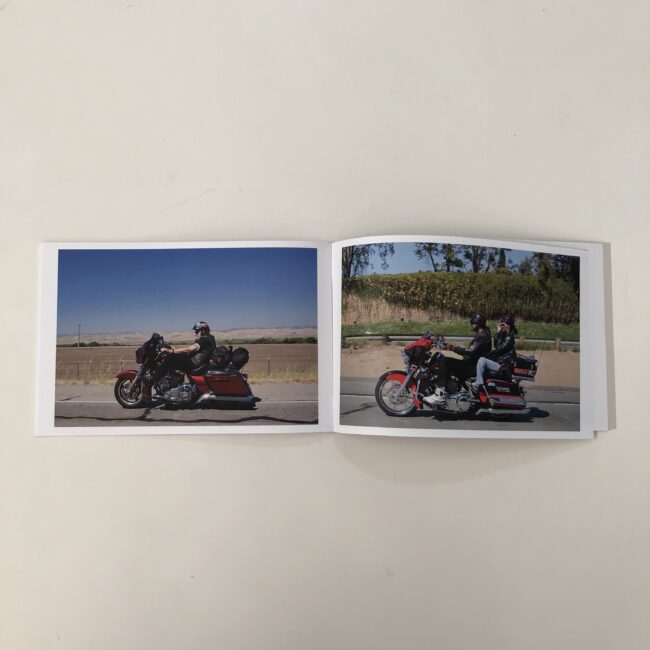 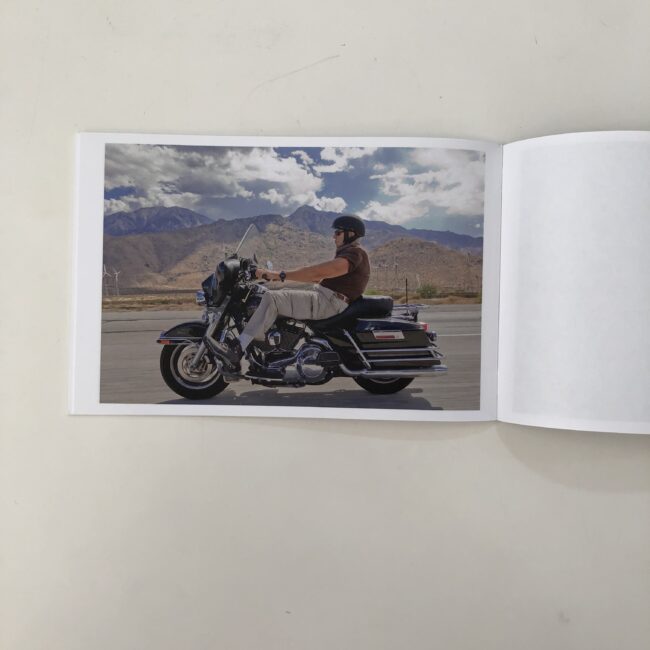 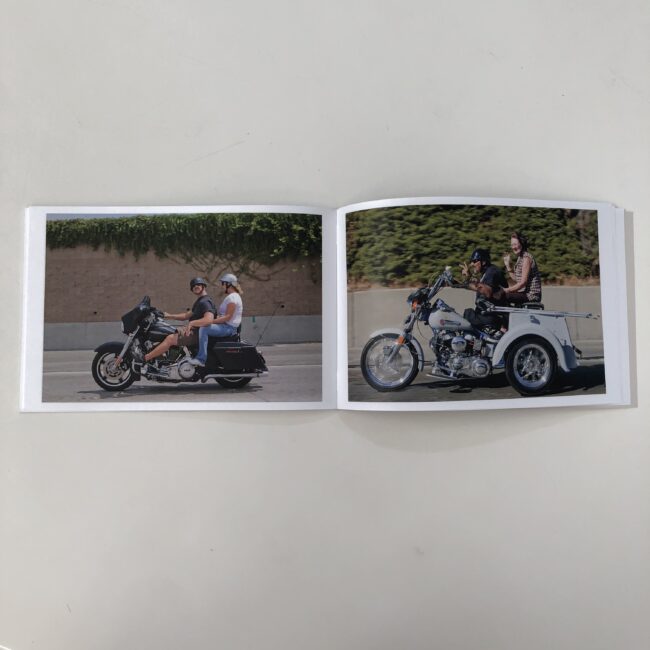 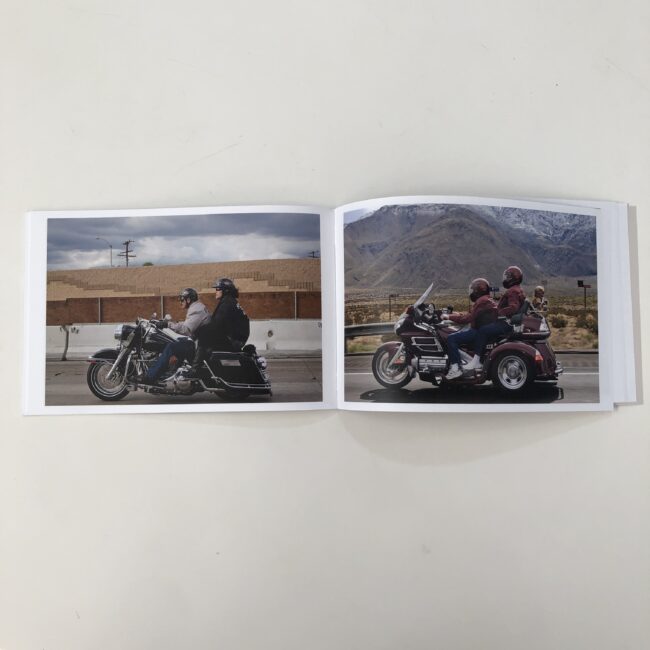 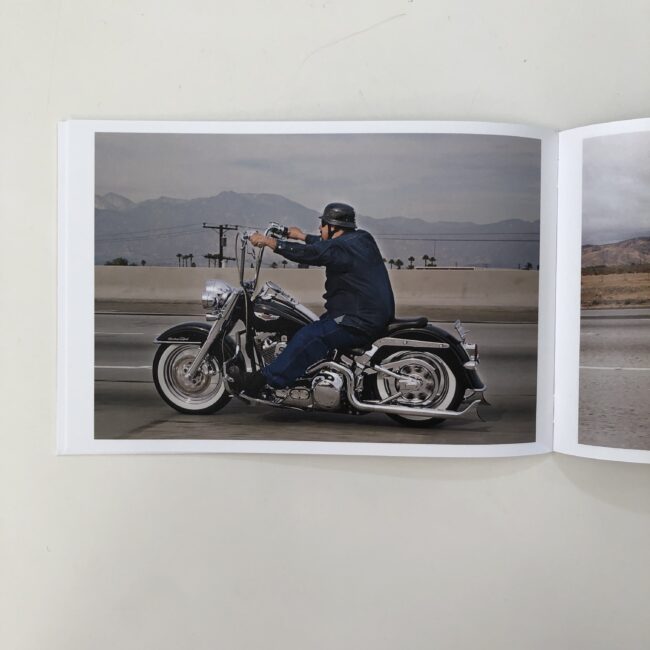 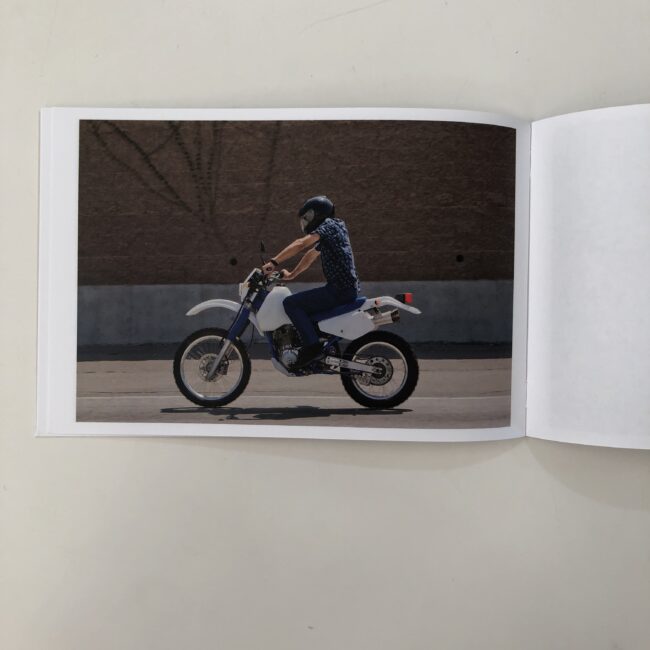 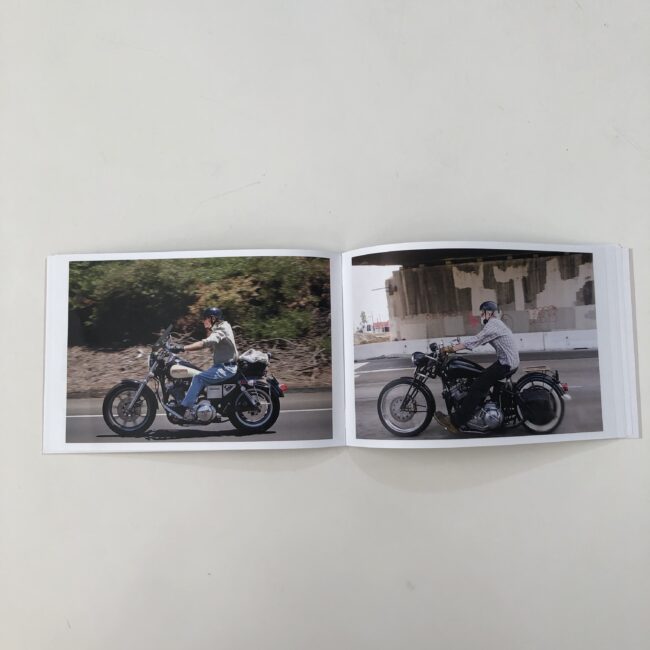 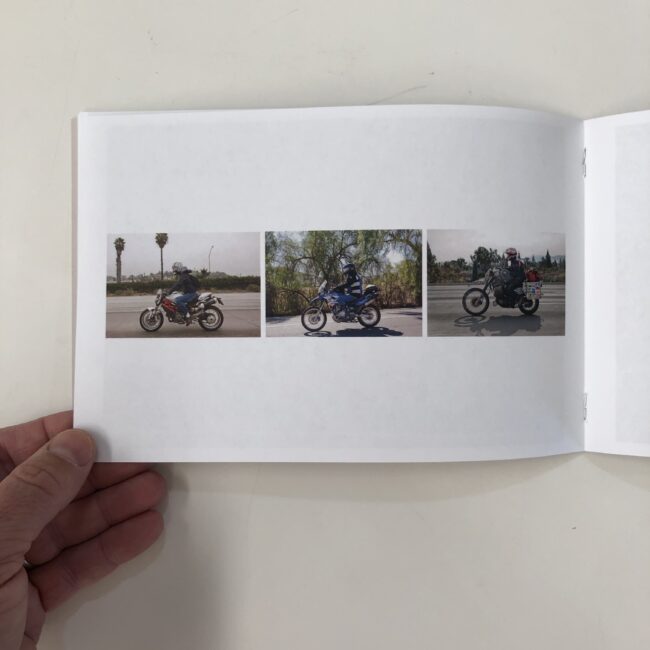 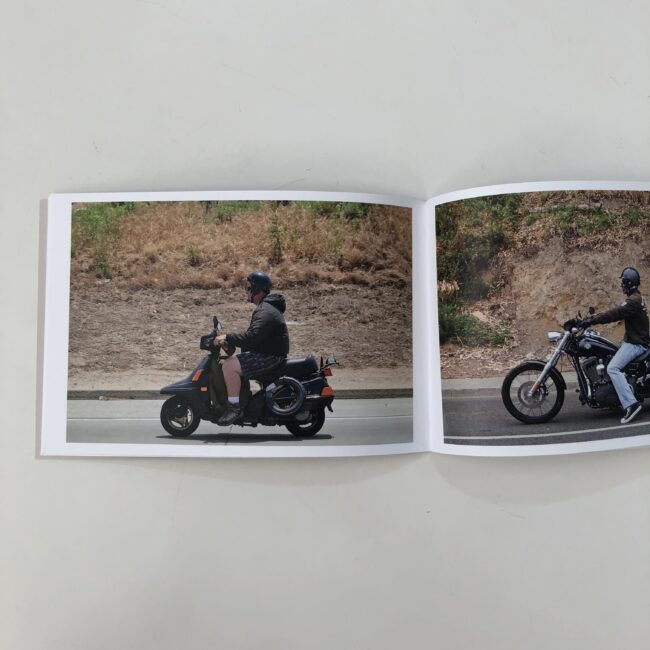 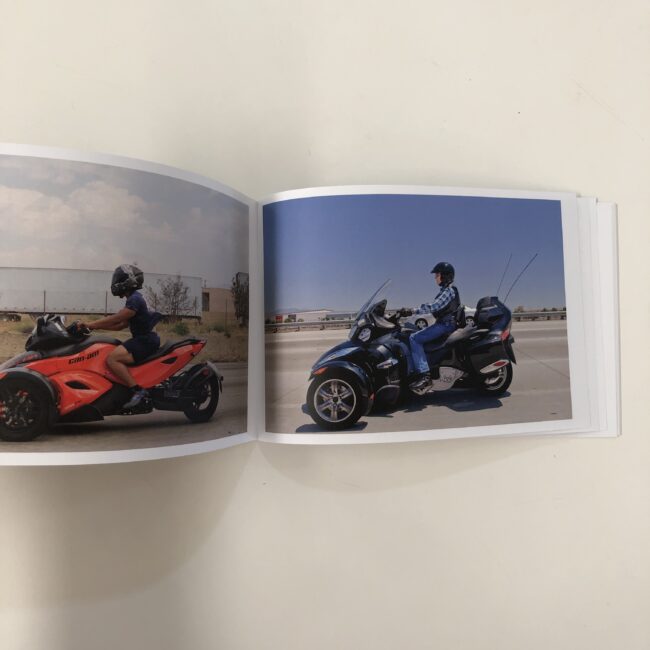 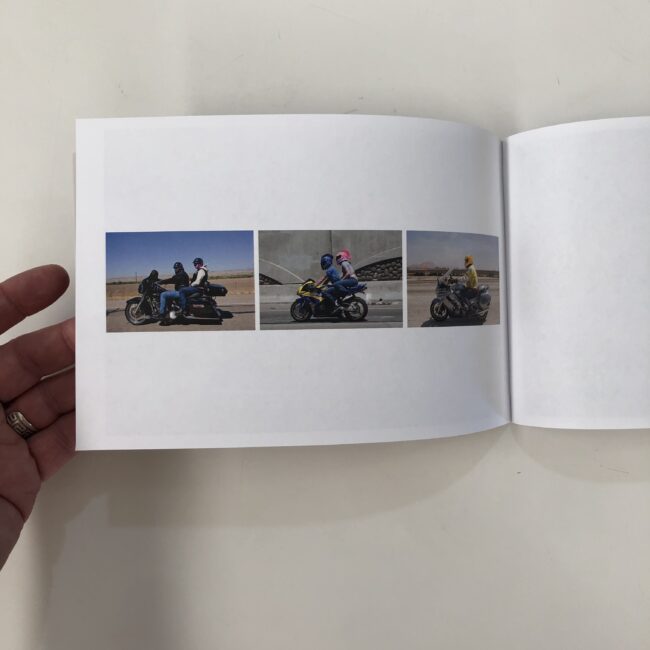 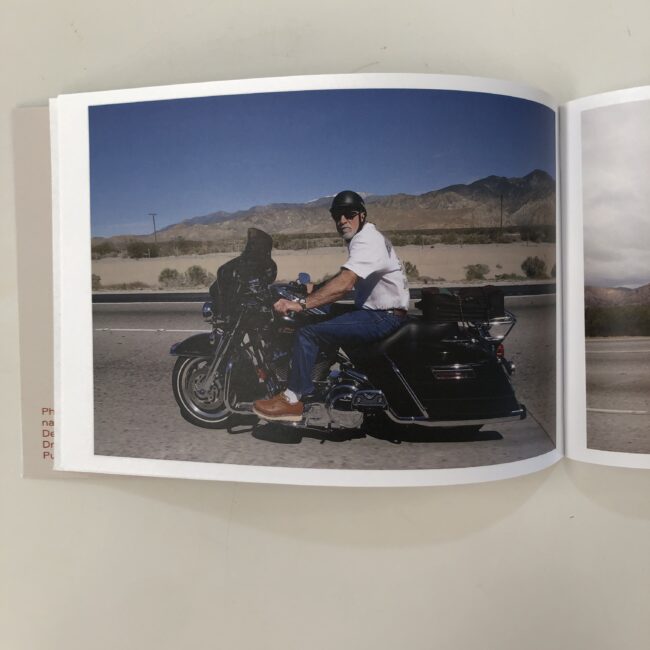 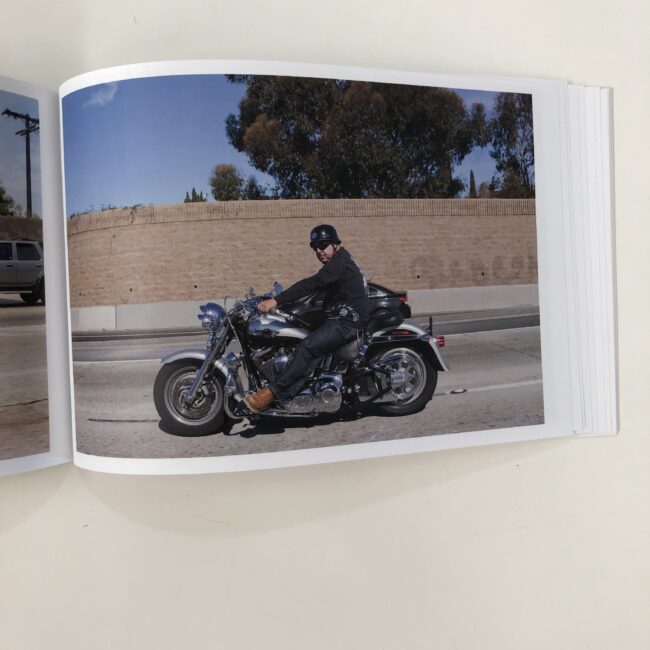 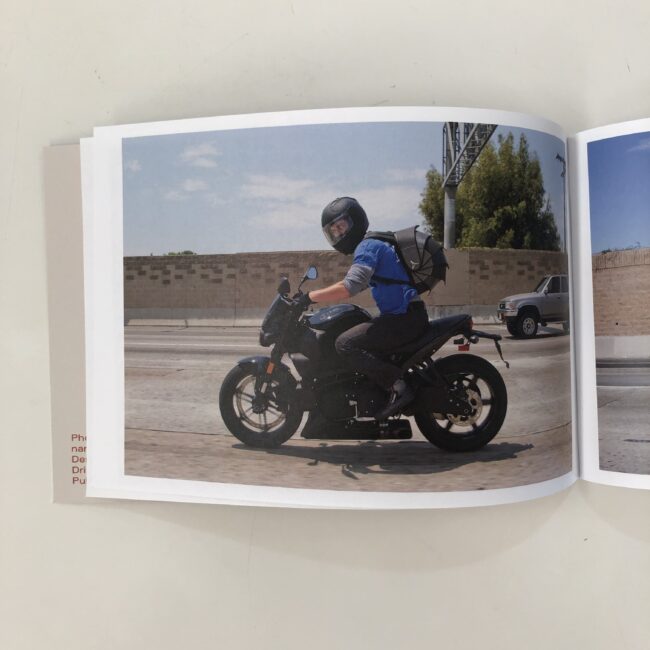 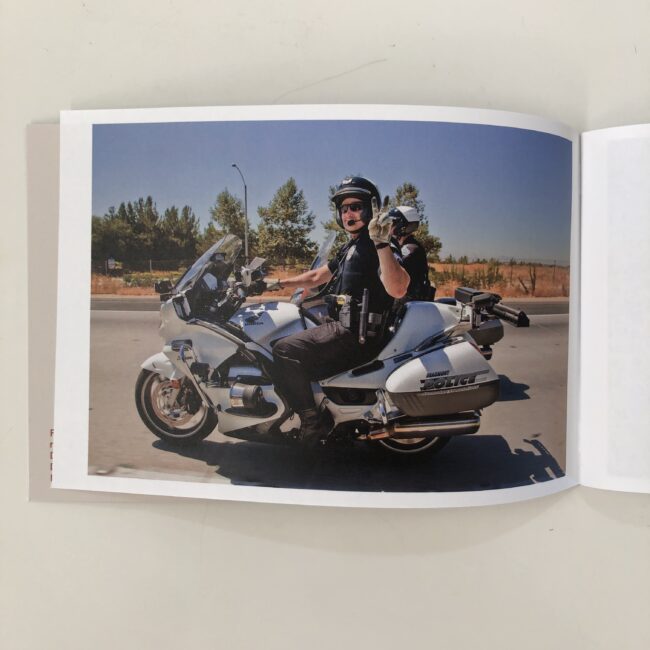 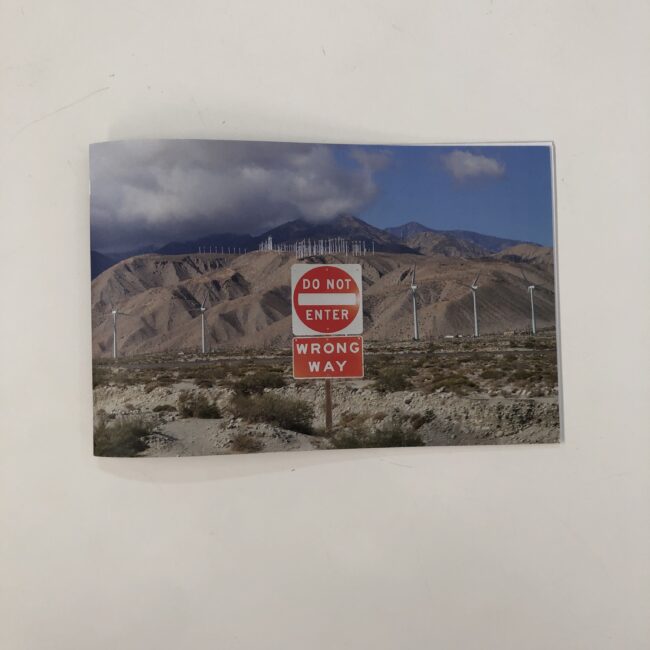 The Art of the Personal Project: Jim Wright