“There is something deeply Universal about this human instinct to rest and rejuvenate by the sea.”

I’ve never quoted myself to open the column.

But there’s a reason, I promise, and we’ll get to it.

The other day, my daughter asked what I used to do in Summer, when I was her age?

I told her my folks sent my brother and me to sleep-away-camp, beginning when we were 6 and 8 respectively.

We’d go off to rural Pennsylvania, (or later Upstate New York,) for two months at a time, over an 8 year period.

She was surprised, as that is wildly out of her life experience, growing up here in Northern New Mexico.

But, I assured her, though we weren’t packing her off like that, it was pretty common among suburban, Jersey Jewish kids, back in the day.

Before and after we left for camp, though, on nice days we went to the beach.

(Jersey in the 80’s was like living in a John Hughes’ film.)

It was pretty rad, I must say.

In fact, given it’s June 23rd, (as I’m writing,) there’s a good chance I would have been at the beach on this exact date, 40 years ago.

Living in the mountains, the nearest, large body of water is 700 miles away, and that’s the Sea of Cortez in Mexico.

The Gulf of Mexico in Texas, the Pacific Ocean in SoCal, and the Great Lakes, all are nearly 1000 miles from here.

But wouldn’t you know it?

I had a vicarious trip to the sea in a photo-book today.

(We’ll get there in a minute.)

After looking at the book, and ruminating on that urge to be near the ocean, I laid down on a rug in the living room, imagining the waves crashing and cresting.

Back in Jersey, on the Atlantic Ocean, there’s a particular smell to the water.

I’d love to have that odor in my nose right now.

(At least California is closer.)

So I started thinking of the big, blue waves of the Pacific.

“Wait a second,” I thought.

I have a solution to this.

We just need to get digital!

I grabbed my phone, and ran to a closet.

Finger-scrolling furiously, I found a video I made on the beach in San Diego, nearly six months ago, and it was as if past-me were speaking to current-me.

OK, I know most of you don’t watch the videos.

But context matters, such that (except for the embarrassing fingers-on-the-lens moment,) I was strolling along the oceanfront, narrating for you guys, (and my current-self,) how nice it is to relax by the ocean when you can.

(It’s where the column-opening-quote came from.)

Standing in the closet, remembering how nice the sounds and breezes were, I felt the heartsickness subsiding.

Then I found a video of my last look at the Pacific, seconds before we turned away, to head back East across the Great American West.

It’s so lovely, that one perfect moment.

Anyway, enough of the waxing philosophical.

(I saw a photo-book that put me on this rant. It wasn’t planned.)

My book stack is big, as I’ve said, so I reached in and pulled out a box from Summer 2021, published in 2020, so it’s not exactly ripped from the headlines.

Surely, I had no idea what would be inside.

Straight up, Radius is known for craftsmanship and design, and I mean this cover!

I don’t speak Portuguese, but as I know some Spanish, Italian and French, I guessed the title meant Waters of Gold, and the coastline in the graphic made me think of Rio de Janeiro, though I’ve never been.

Sure enough, that’s what the book’s about, as it seems the artist was born there, spent a chunk of her life in England, and then returned to make these photos.

(I’m not clear if it was a part-time, or full-time return to make the work in the book.)

I write all the time that books are experiences, and this one actually felt like that was the main point.

Creating a real, lived-in experience for the viewer.

The movement, in and out of the crowds.

In and out of the water.

I was re-watching “Friday Night Lights” recently, and after looking over my shoulder, my wife said she’d forgotten how the many jump-cuts, and constant change of camera-angle coverage, made her feel like she really was in that small, West Texas town.

That’s what this book did for me.

It brought me to Ipanema Beach for a few minutes.

(Which is pretty cool.)

The print quality is super-high, as I’d expect from Radius, and frankly, I bought some weed in Santa Fe recently that got me super-high, so shout out to the quality that city’s turning out!

Back to the book, though.

The photos are dynamic, as I said, and there are a lot of them.

Probably, if I’d been editing, I’d have chopped it just a tad.

But text bits, in Portuguese and English, are sprinkled throughout, on different paper stock, so that does keep the narrative moving, and alleviates any potential viewer boredom.

(Especially as none of the text is overly-long.)

In keeping with my shorter, breezier, Summer style… this is a very well-made book.

I enjoyed my time with it, both for the art itself, and the fact it sent me back to my own digital archive, to re-live memories of the sea, from past sunny days.

(As I can’t get quite get there at the moment.) 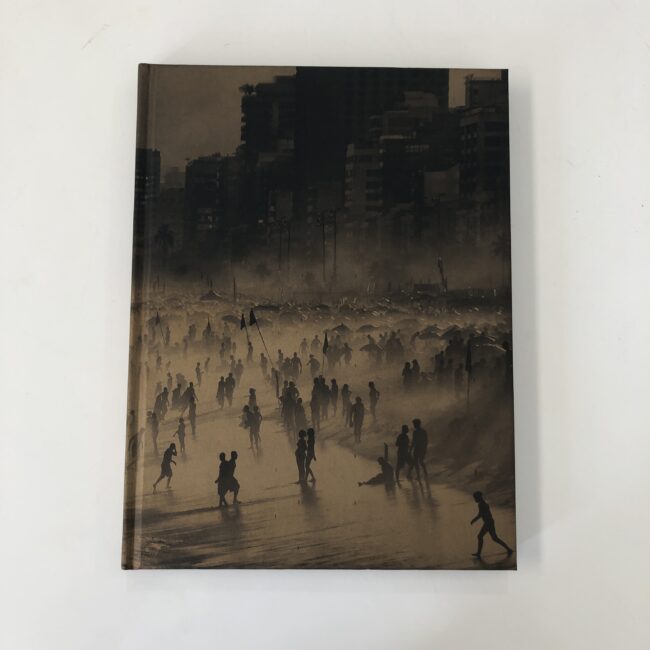 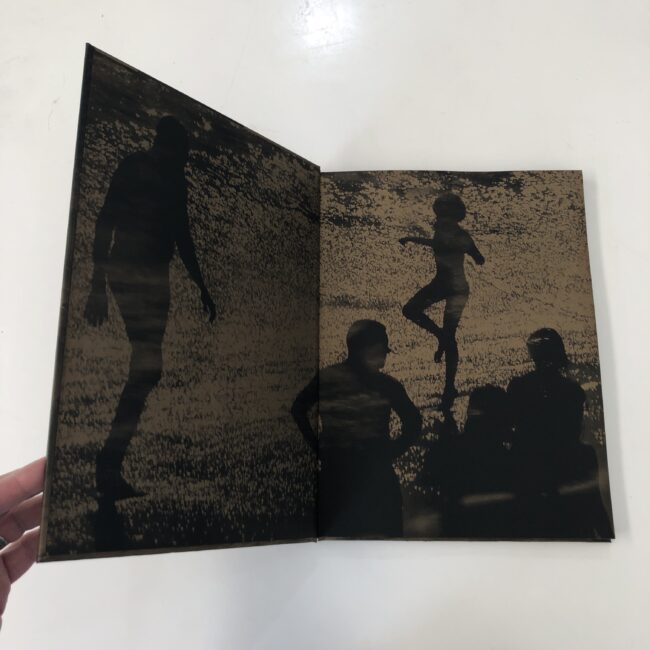 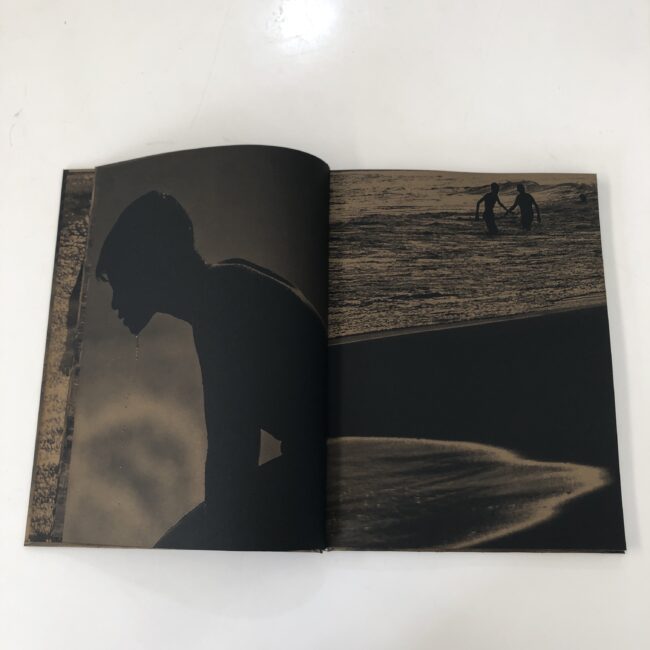 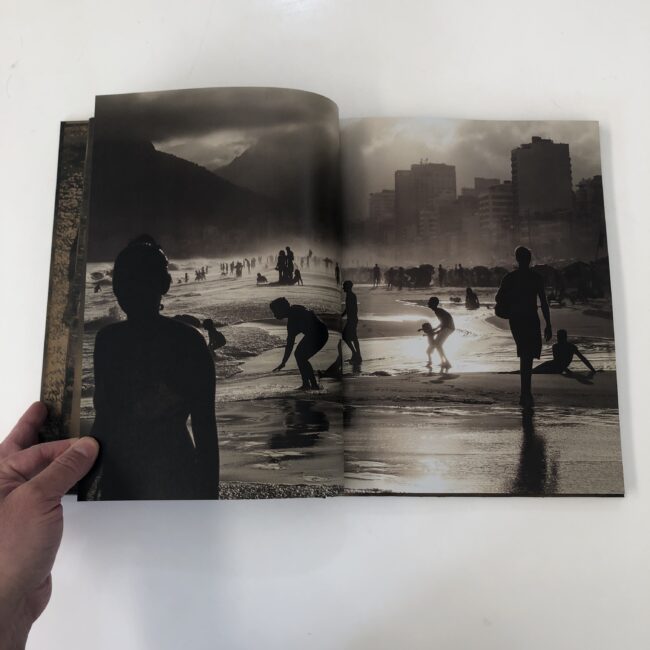 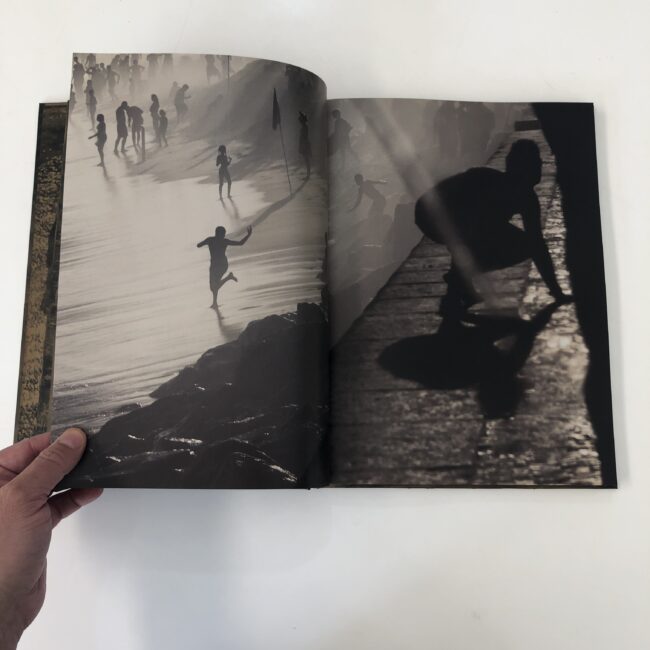 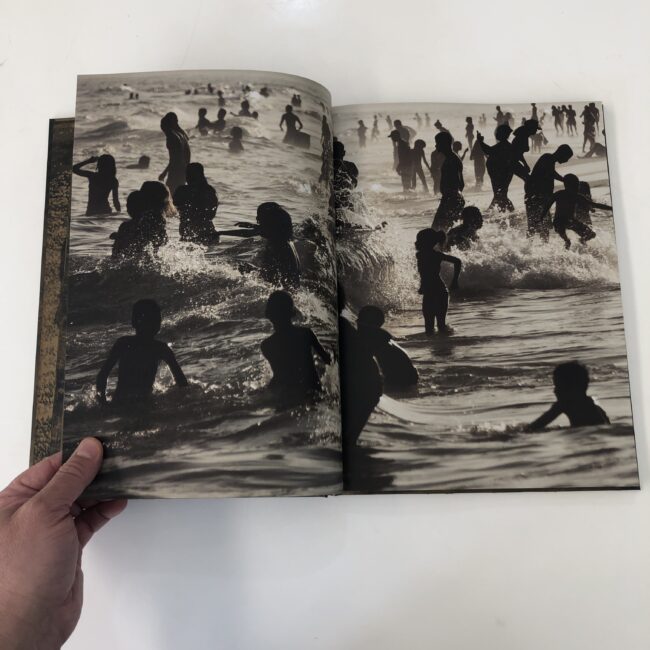 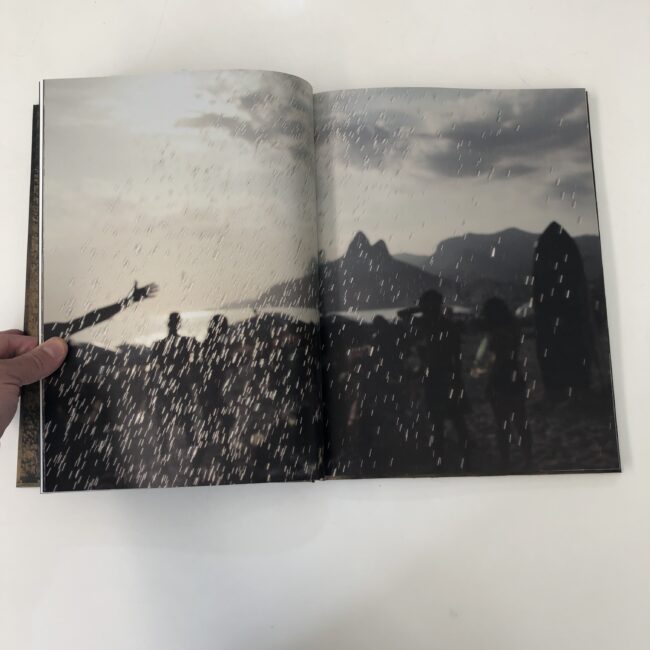 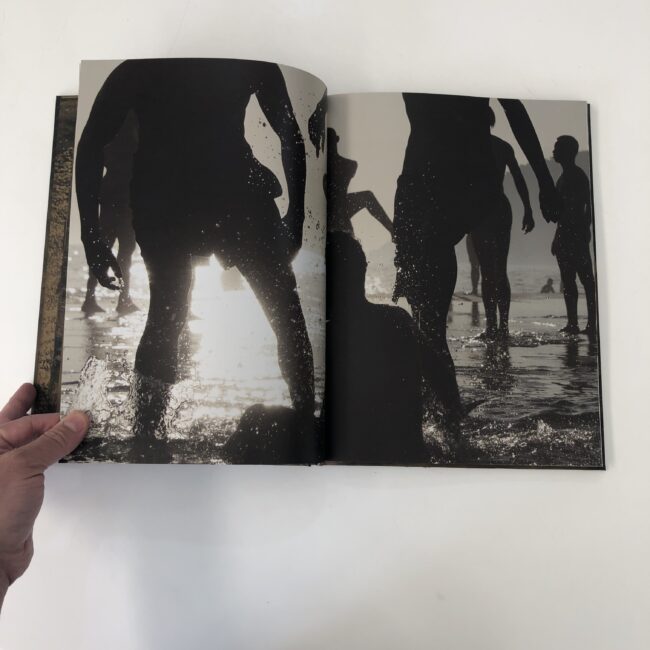 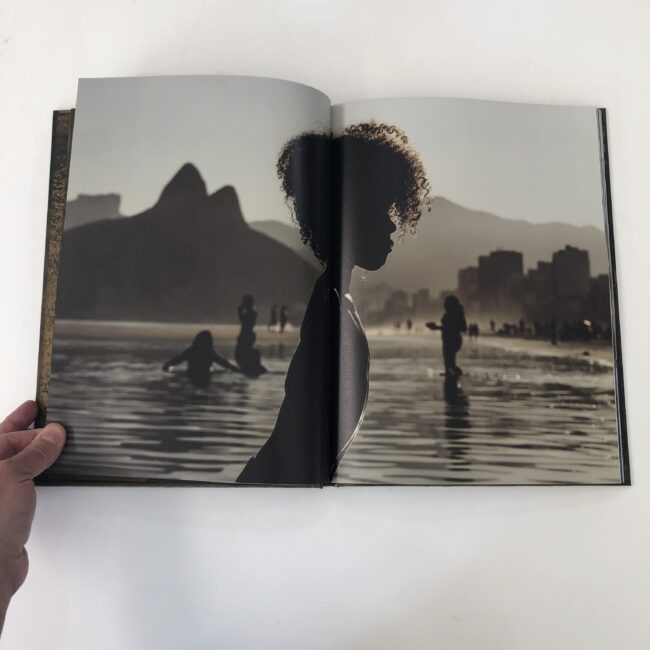 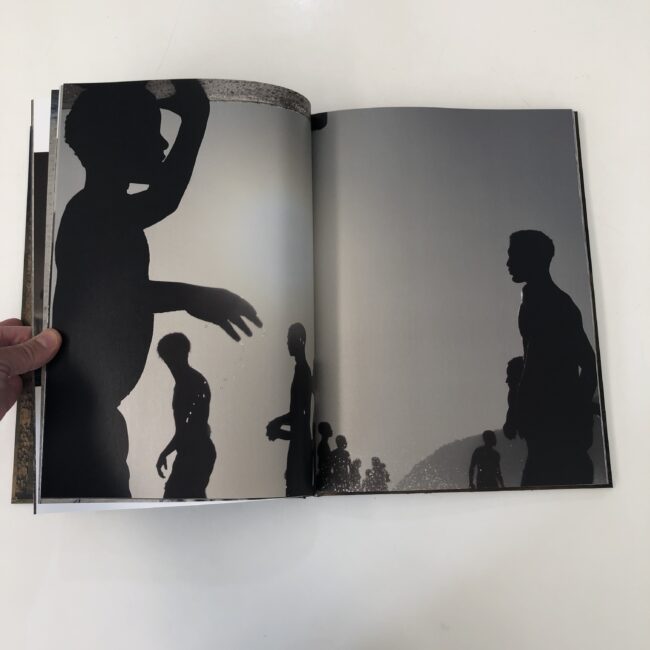 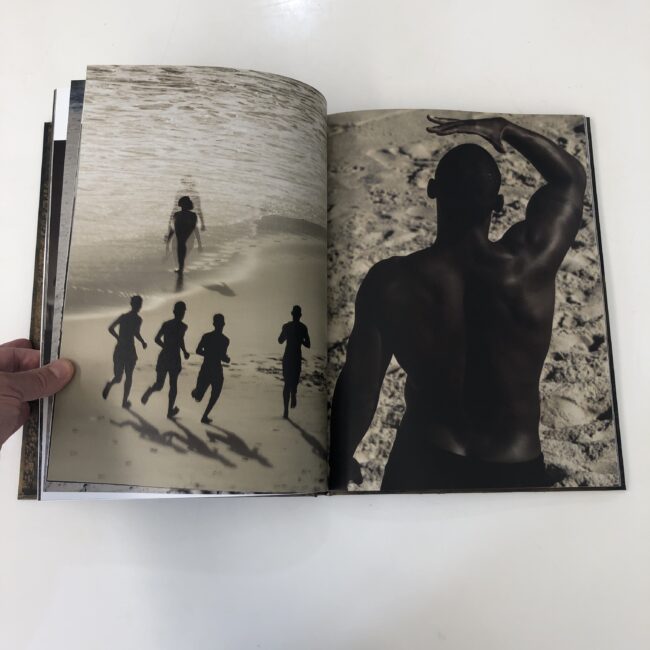 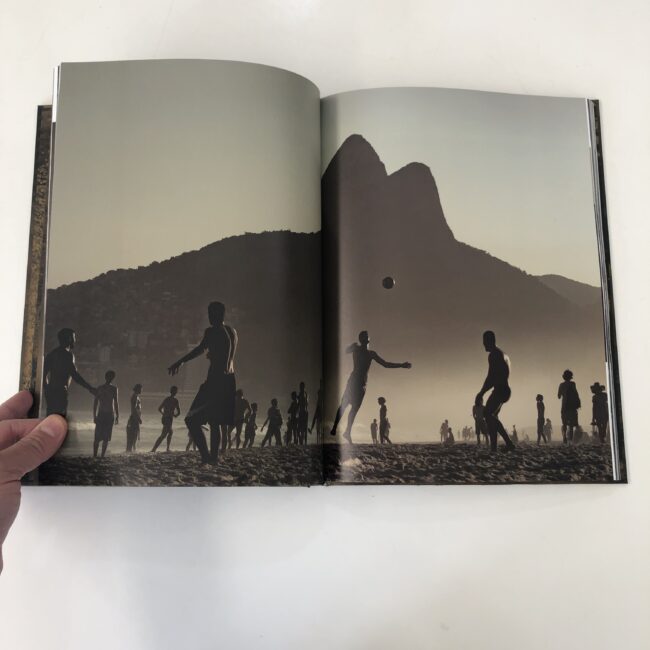 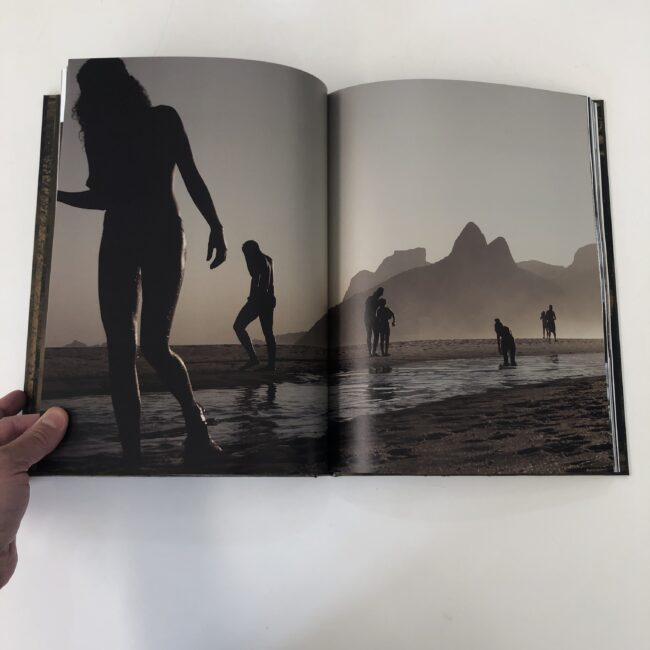 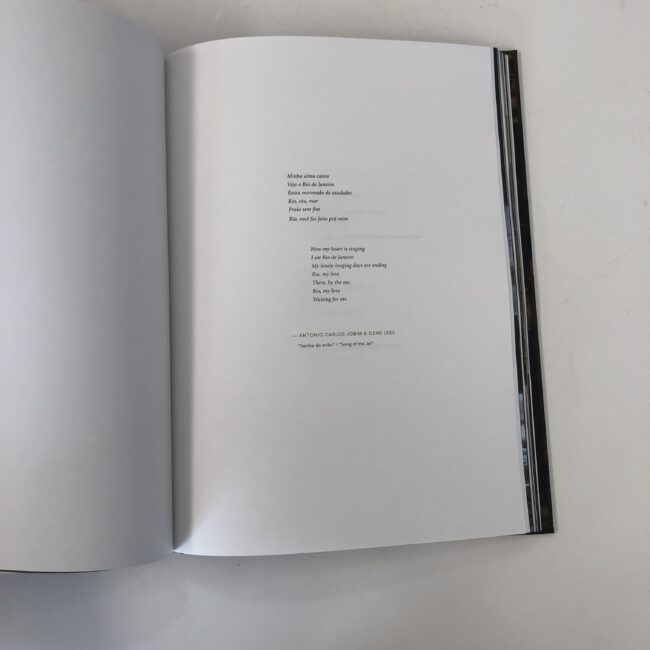 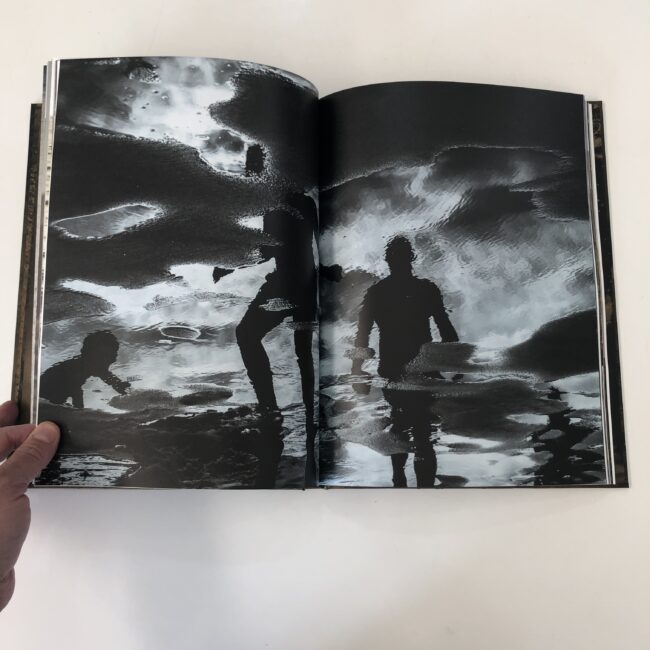 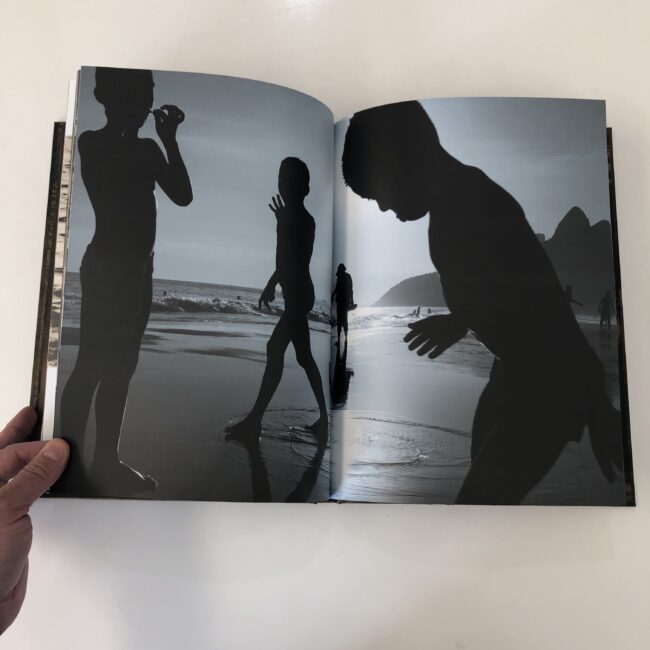 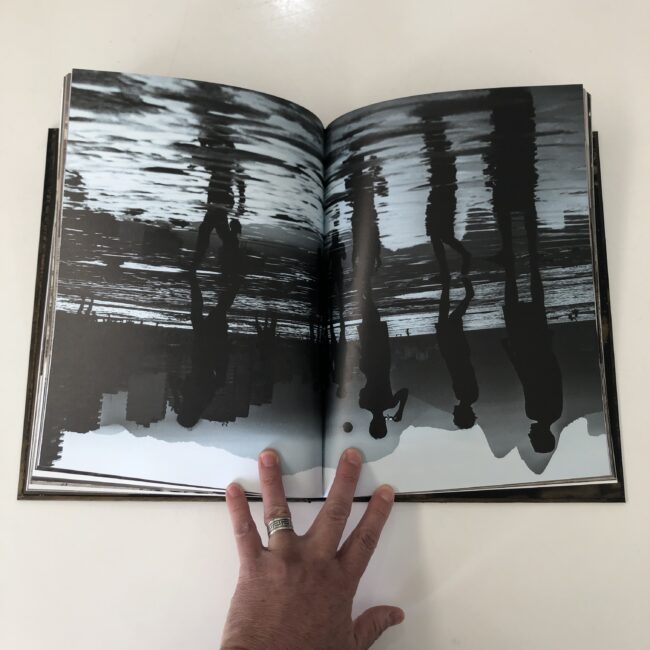 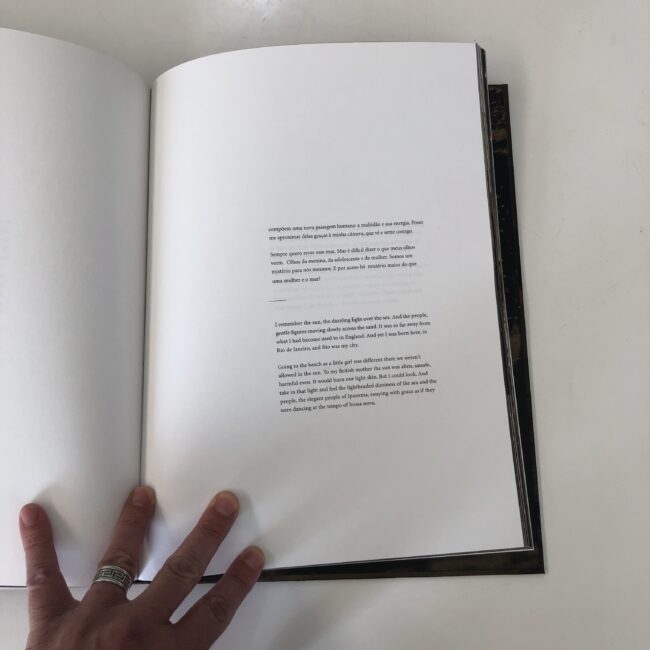 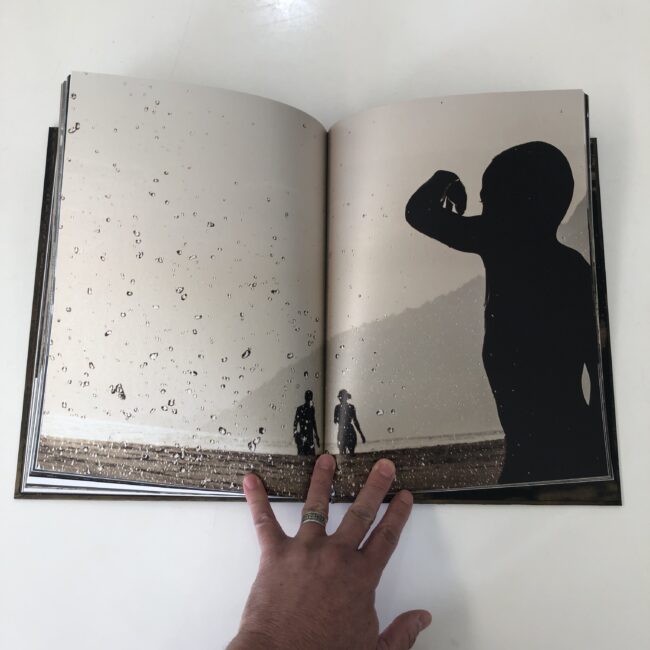 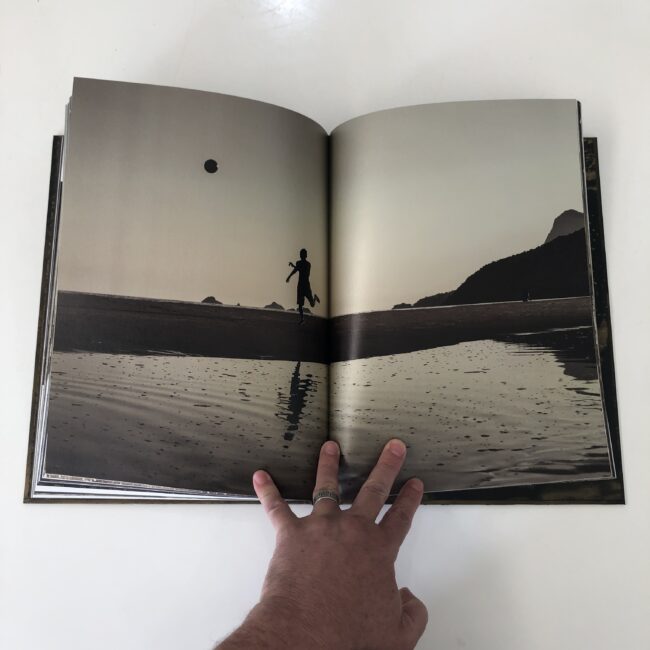 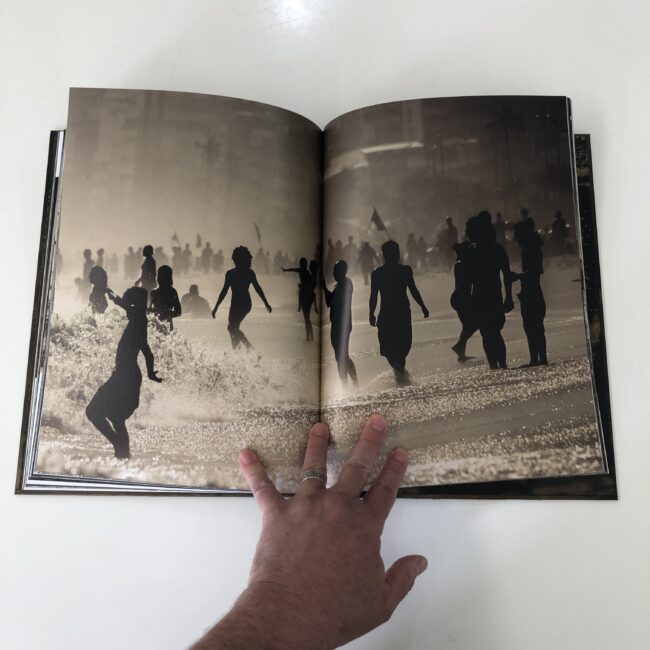 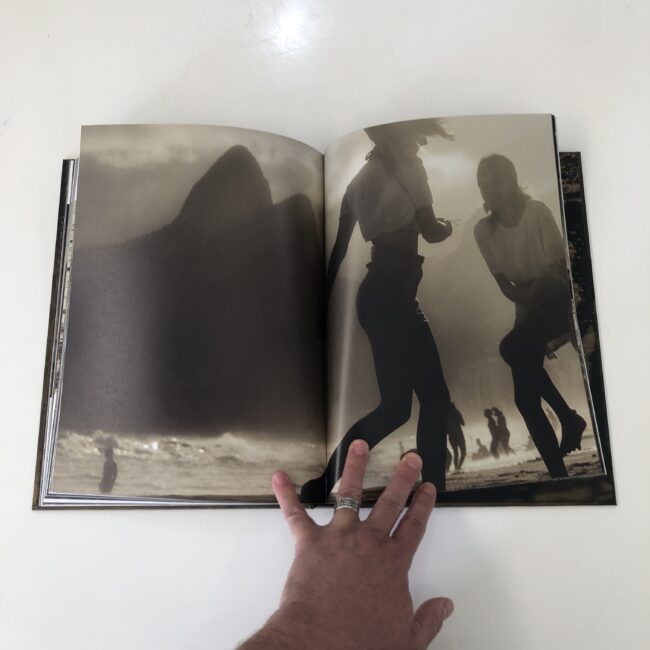 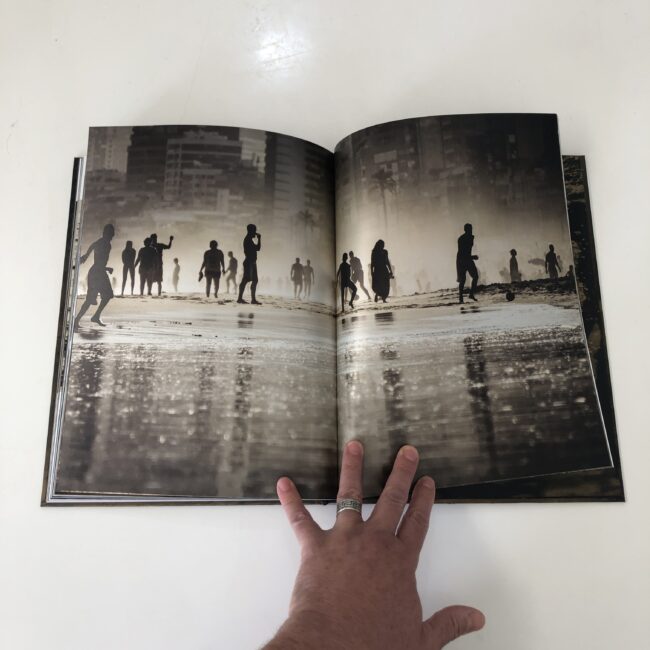 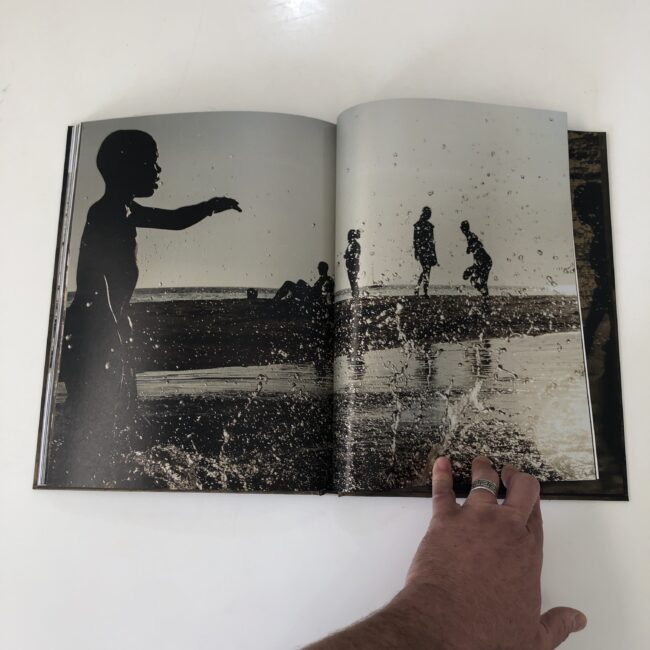 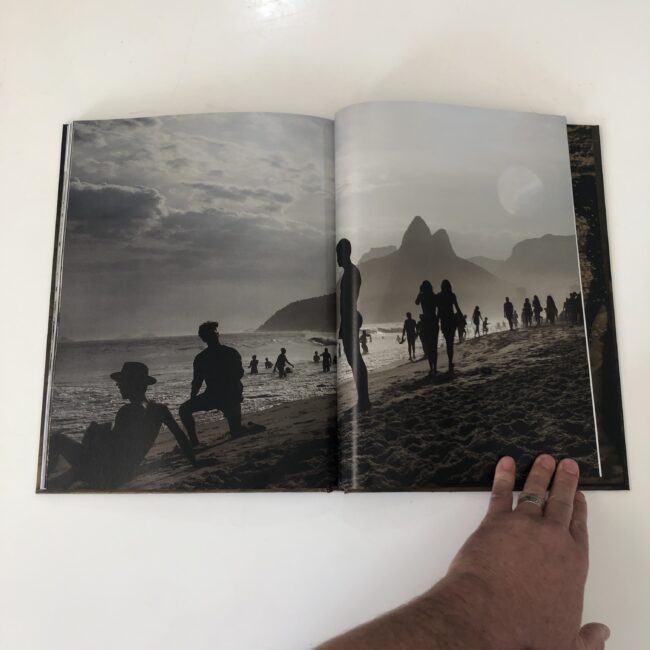 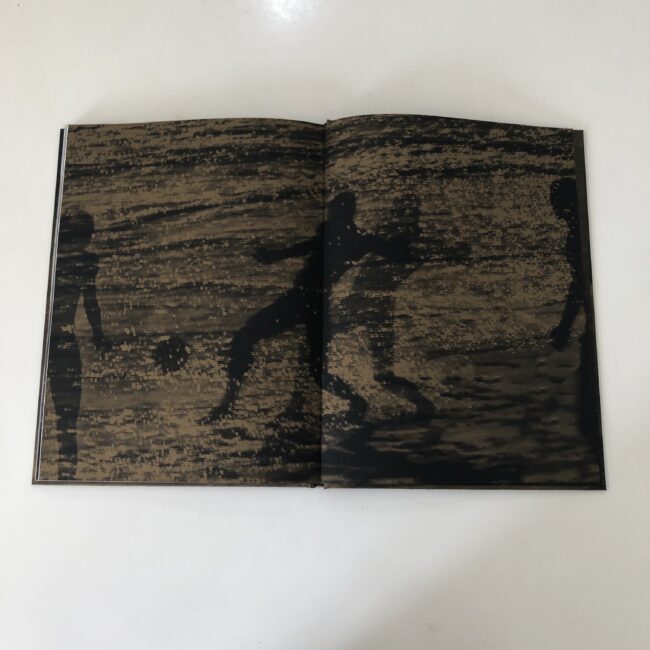 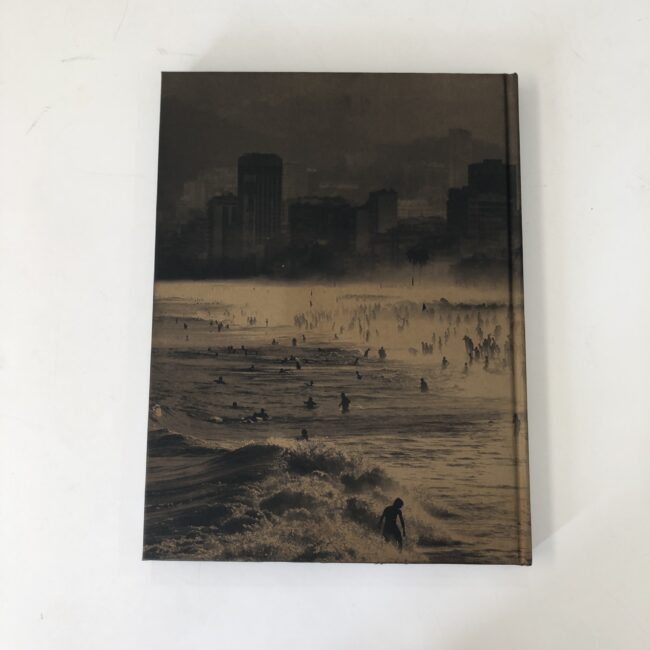