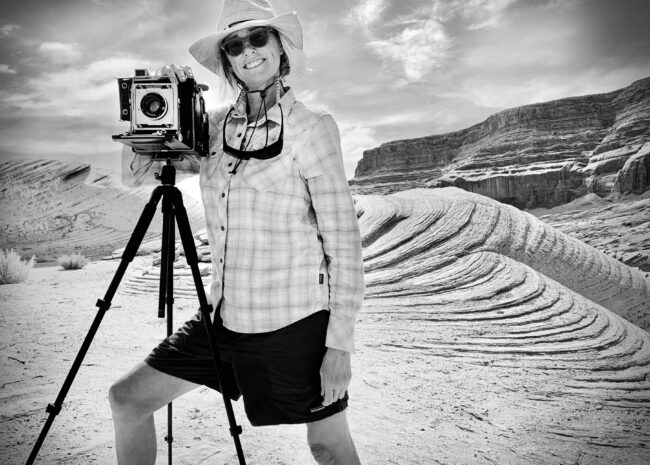 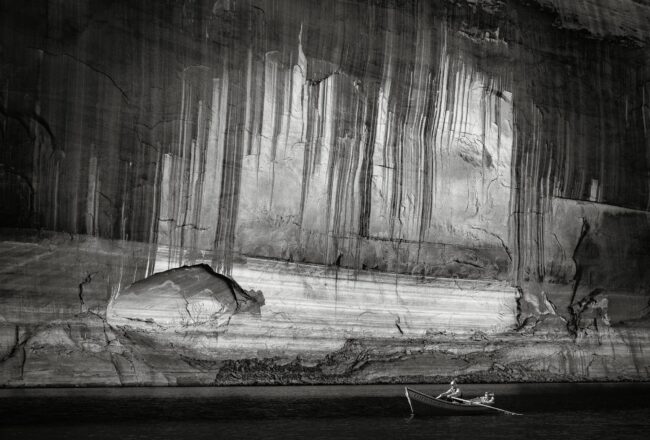 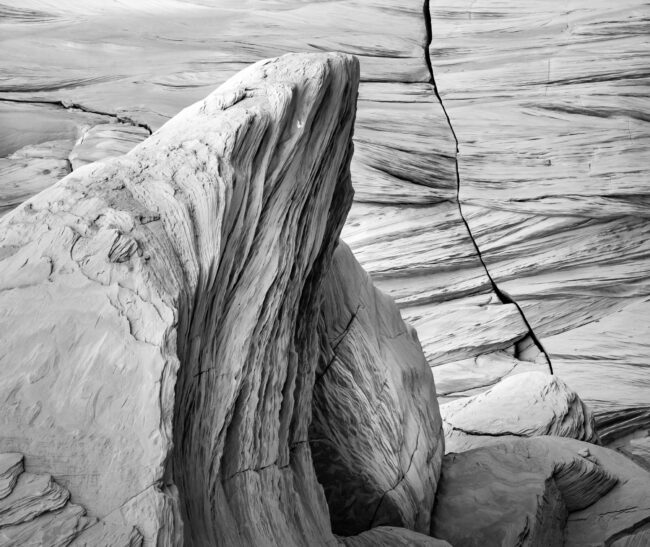 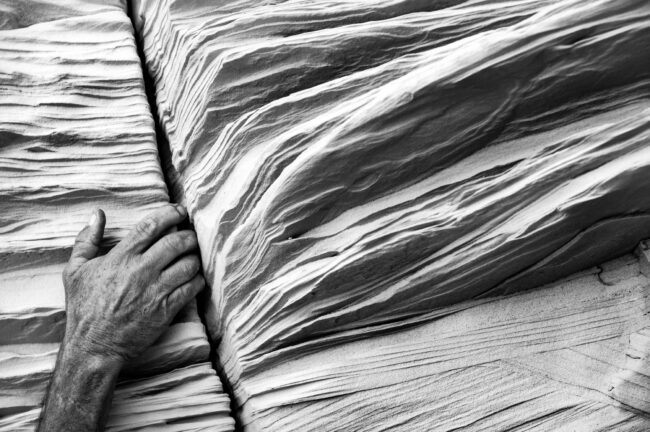 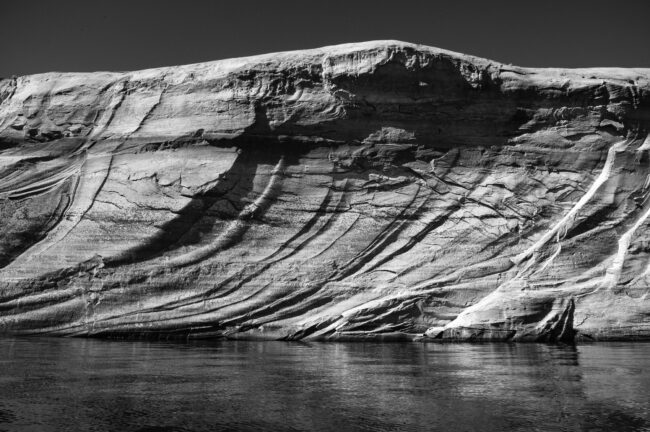 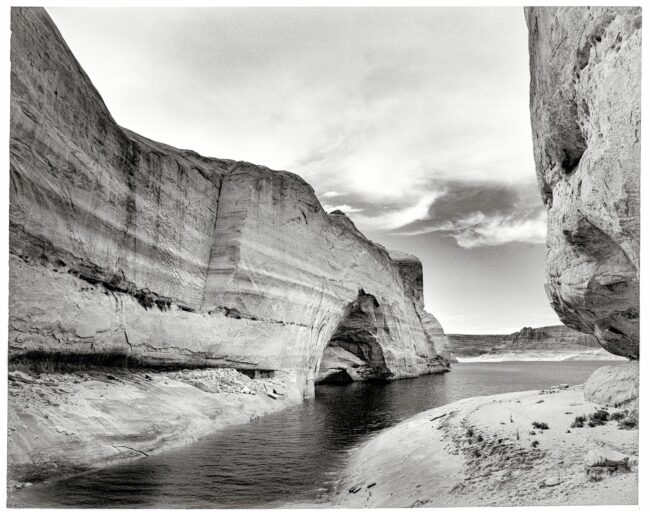 Heidi: How did that camera find its way to you?
Dawn: A few years ago, my friend Richard Jackson and I were working on a large format project together. Jackson is a master printer and makes beautiful photographic prints. Out of the blue he hands me this old Crown Graphic 4×5 camera and says, “Would you be interested in using this camera? It belonged to Tad Nichols.” My jaw dropped. I am a huge fan of Tad’s work and feel like he is the Ansel Adams of Glen Canyon. He photographed Glen Canyon in the 1950’s before it was buried under a watery tomb called Lake Powell. Tad documented the pre-damed canyon with this camera and he did 16mm motion pictures as well.  In 1998, there was a big push to get these important photos published and get his archive to Northern Arizona University (NAU). Tad and Richard became friends on a river trip many years before and he became the printer for his book, Glen Canyon-Images of a Lost World.  Tad passed away in 1999 and bequeathed this camera to Richard.

I told Richard, “No thank you, I’m worried I would harm this historical camera.” This offer made me nervous but I was also elated, but I said, “I’ll borrow it when I have a good project for it.” Well, 2 years later, Glen Canyon started to emerge and Lake Powell’s water levels are at its all time low since the fill up of the reservoir in 1963. Finally, I’ll go see Glen Canyon, a place I never thought I would experience in my life time except in books, photographs, films and Katie Lee songs. And I’ll take TAD (the Crown Graphic) with me. WHOOP!

Why was this body of work important for you to document?
This is a project of LOVE. The love for nature, photography, adventure and the historic significance. I can’t believe this happening. I feel it is my most important work yet to date. Plus, I’m from the Southwest and want to help preserve this iconic landscape. Tad spent time photographing pre-dam Glen Canyon, dam construction, and the resulting formation of Lake Powell with his 4×5 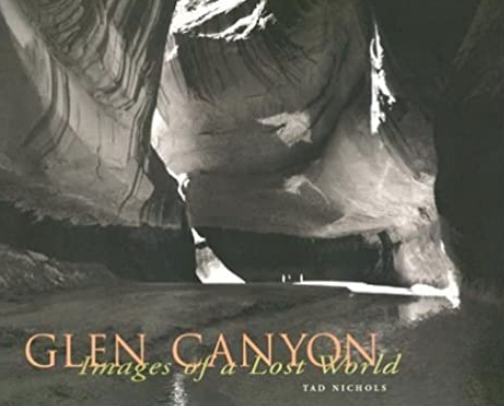 How much did Tads work from Glen Canyon: Images of a Lost World inform your body of work?
His book is definitely is an inspiration. I didn’t go back and recreate his work. I went back to explore and expose what I found and let creativity guide me. This is a creative project and not a replica of the old and new. Though, I do believe there are a few people doing this type of work. The book was my guide and Tad’s spirit to create art and advocacy for our public lands.

Since there’s a significant time and water gap, was it challenging to find the location?
It is still a giant lake. There is still 300 feet of water till you hit the river channel in the deepest parts. But the very outside of the lake is being exposed so you do have a glimpse of what was buried. I feel so honored to get to these places. Glen Canyon is massive and many side canyon fall into it. The logistics are overwhelming and feel I got just a glimpse of what is to be discovered. Tad documented the canyon for over 10 years. I have had 5 journeys by boat so far, that added up to about 12 days on using the camera in the field. I used Gaia maps and marked waypoints of the places on the map that I took the photos. All most all the images look like they are taken underwater by todays maps. Looks like I needed underwater housing and some scuba gear to get the shots.

Just trying to get on the lake there were delays and mishaps of all sorts – bad weather (fucking wind that turns the lake into an ocean), forest fires, road closures, ramp closures, running out of gas, breaking tents, sand in the cameras, sand in your crotch…I’m sure you get the idea. Hahaha. The place is over whelming but over all worth it. The beauty keeps calling me back.

If you were able to connect with Tad, what would your message to him be?
I would thank him for his determination in trying to save this beautiful canyon and documenting this natural wonder before it was all gone. I would tell him I’m going to Glen Canyon with his camera and called it “TAD”. To be honest, I talk to camera all the time when I’m making photos. I ask him to guide me and I usually take a huge breath when I release the trigger cable. I got a little nervous making the exposers on real film. I made sure I backed up my images with my Nikon. You don’t want to mess up because it is not a place you can return to so easily. There is a lot of money and time that goes into one exposer. So I try to relax, concentrate, breathe and talk to Tad and enjoy the beauty of the canyon.

What conservation groups did you work with for this project?
I am involved with the Glen Canyon Institute (GCI) and NAU archive to prepare exhibits about the emergence of Glen Canyon. The work will have an art advocacy message and a percentage of the print profits will go back into these non-profits.  If anyone would like a print they are available. I hope to get a book rolling too but not sure how to do this. I’ve never done a book before but i’m up for the challenge.

What’s your goal with this project?
My goal is to inspire people to not make the same mistake again and fight for our natural world. David Brower, CEO of the Sierra Club during the 1960’s, said, “This was my biggest mistake to let Glen Canyon go under.”

I also started a very personal heart felt film about the making of this project called, Tad’s Emerging World.  I’ll be submitting it to film festivals end of July. 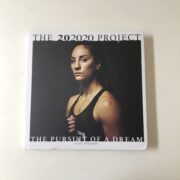