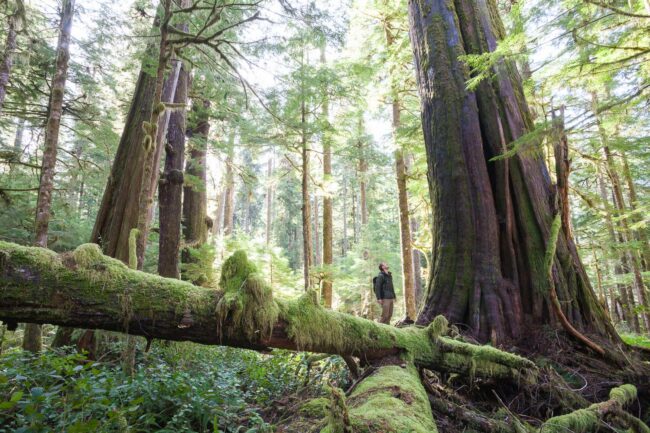 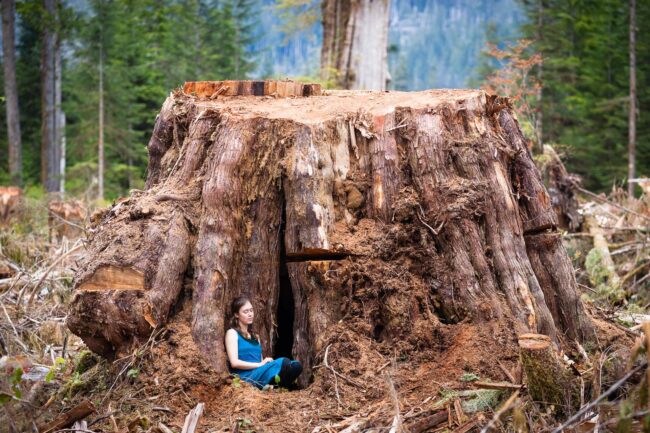 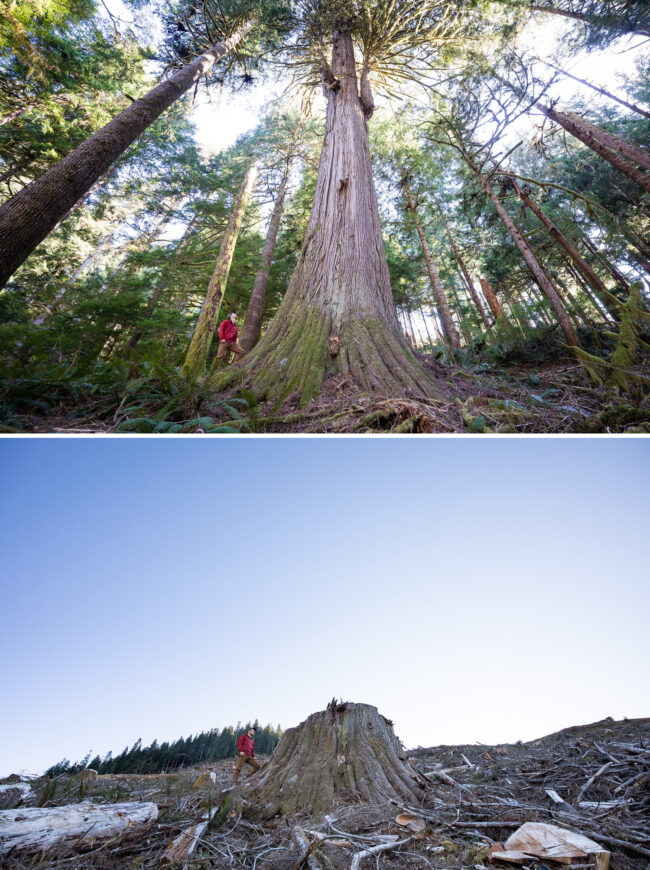 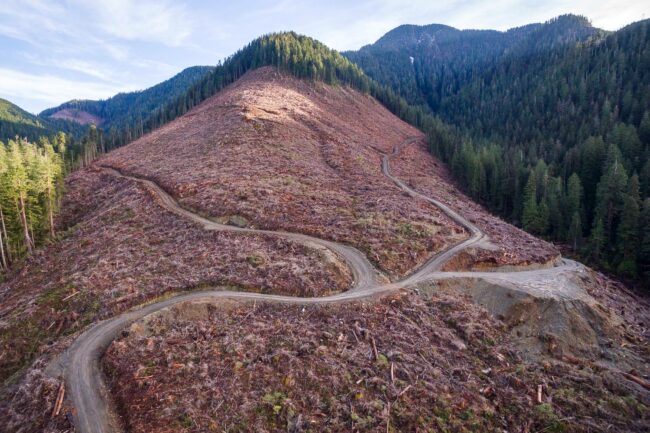 Heidi: Nearly 1/3 of your life has gone to protecting the old growth and co-founding Ancient Forest Alliance. When did you realize you could blend photography and activism as a career?
TJ: I started to consider that possibility during photo school way back in 2007 when I was volunteering with environmental groups and shooting photos to help with their campaigns. I could see it was a powerful tool but it was hard to imagine it becoming a full time job though. Then, in 2010, the opportunity arose to launch the Ancient Forest Alliance with my friend Ken Wu. All of a sudden I was able to dedicate the time needed to explore and document the forests of Vancouver Island and BC. There were surprisingly few, if any people doing that at the time so it was exciting to get out there and really start highlighting the good and the bad. Here we are 12 years later, stronger than ever.

When you came across the 216 foot tall Douglas fir called  “Big Lonely Doug” standing tall amongst the clear cut on Vancouver Island, what emotions came up when you took photos of the tree?
Seeing Big Lonely Doug for the first time was heartbreaking. I had gone out that day in February 2012 to explore that exact location and when I arrived, all the trees were freshly cut down. Two years before I had explored the forest adjacent to Big Lonely Doug (now known as Eden Grove) and was returning to see what else lay hidden in the woods. I often wonder how history could have played out differently had we found Doug before the forest was clearcut around him. We had recently been successful in protecting Avatar Grove just down the road and with that momentum, we might have been able to do the same there. But things didn’t go that way. Maybe Doug’s higher purpose was to draw lasting attention to the plight of ancient forests in BC to the world abroad, which he continues to do to this day. 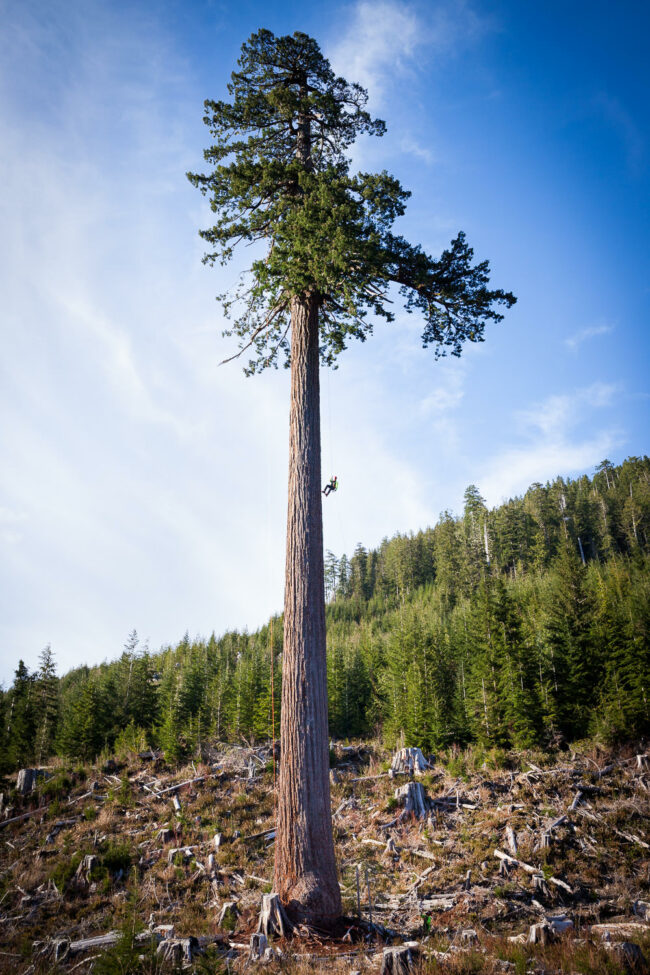 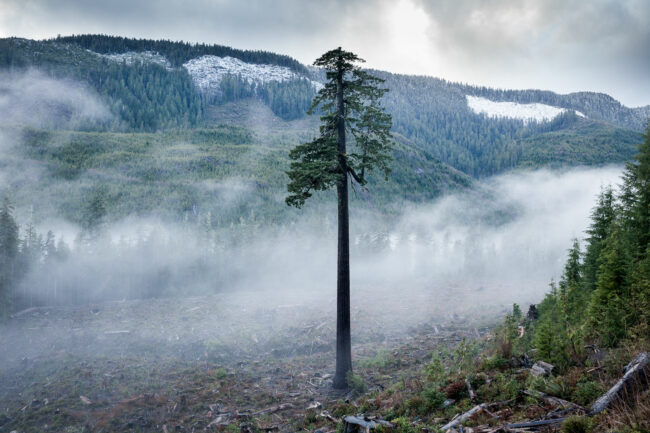 What’s your creative approach to photographing a 216 foot tree from the ground?
I’ve captured photos of Doug in a variety of ways: wide angles from the base, telephotos from a distance, fisheye from the top, drones from the air, and hanging out the side of a helicopter. It’s been a really interesting subject and friend to return to time and time again. Of course, one of the most unique things about Doug is that you can actually see the full height of the tree from top to bottom. Placing a person at the base really gives you a sense of the monumental scale of a tree that’s more than 4m or 12ft wide and over 20 stories tall. When we teamed up with professional tree climbers to help measure the tree, having a person dangling from the side of the trunk was also a wild perspective.

Did you expect these images to go viral?
In this case I think we did. As a photographer trying to explain a complex issue, the more you can distill the various concepts and feelings into a single image, the greater the impact be. Big Lonely Doug tells the whole story in one scene. It highlights both the beauty and grandeur of BC’s ancient forests and their unfortunate destruction. I think it also shocked people that logging like this was still happening during modern times here in Canada. It looks more like a scene out of the 1800’s before people may have known better. But instead, here we have the second largest Douglas-fir tree in Canada, surrounded by giant stumps, in a logging operation approved by the BC government. People were shocked and still are today. 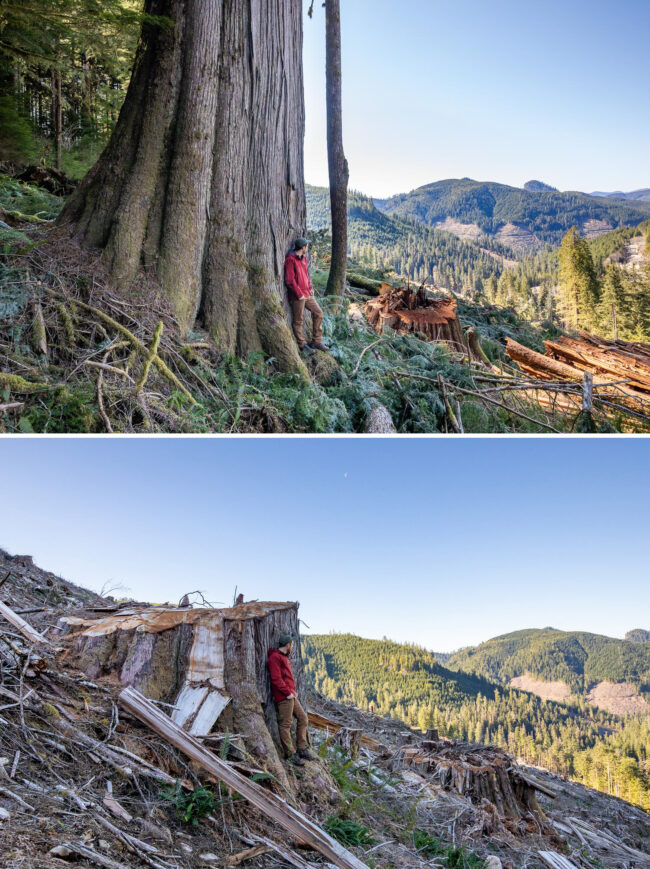 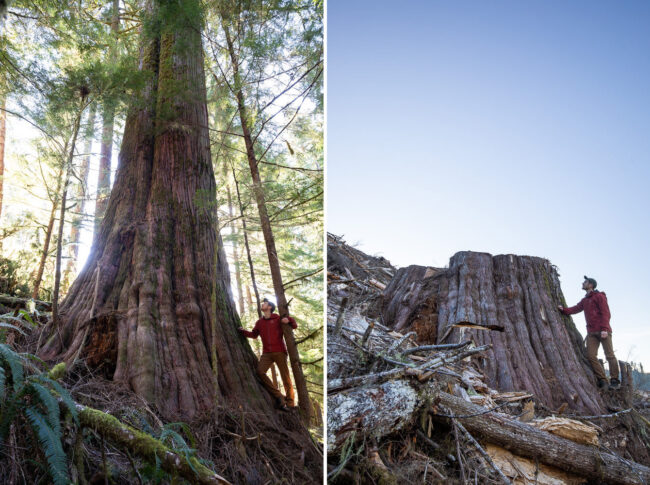 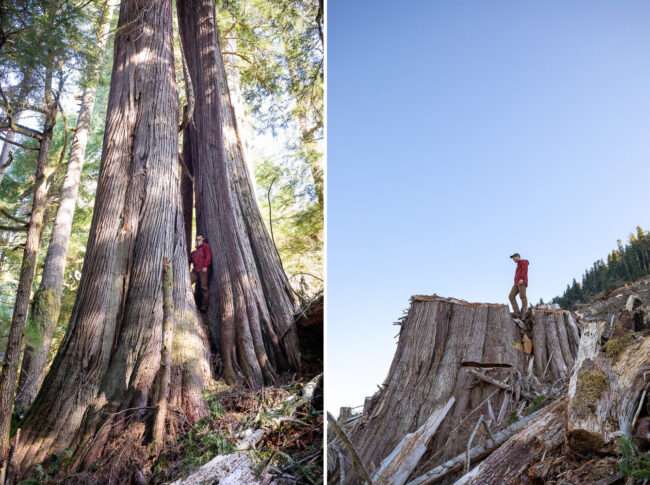 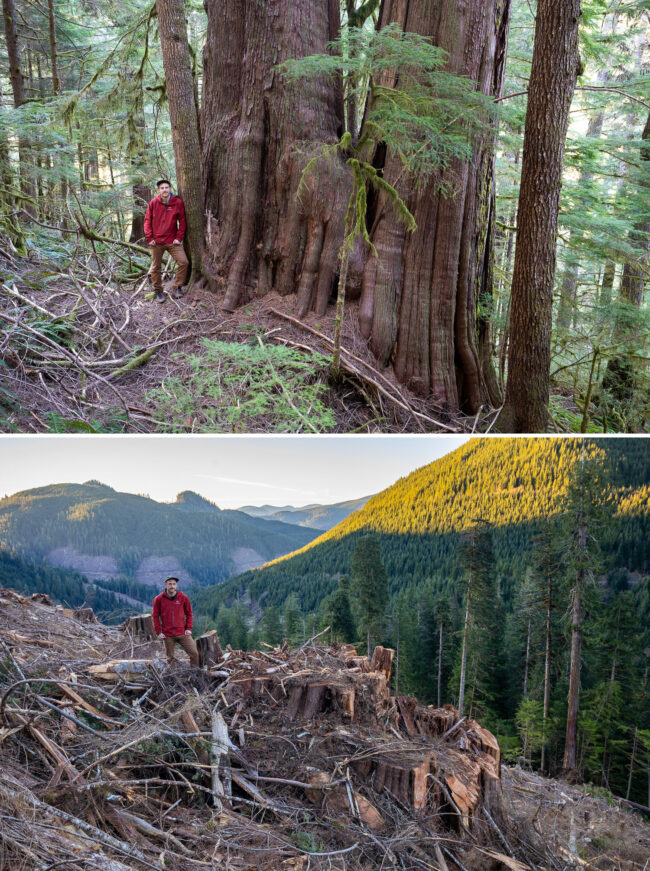 Tell us about your photography process and set up, since you are in several of your own photos I assume to add scale and a human element.
Since I’m often exploring alone, I have to be self-sufficient. In my pack I carry my photo gear, tripod, food/water, and emergency gear and communication. Pre-trip, I will have scoped out a specific forest via satellite imagery and then have those maps loaded on my phone in the field. I then hike in and when I find something I would like to photograph, I set up my tripod and walk into the shot. I can control my camera from my phone which helps me determine where to stand and not have to run to beat the timer! Having a person for scale is the only way to truly grasp the size of these trees or stumps. I feel it also allows people to step into the scene and imagine being there themselves.

How difficult is it to get to these groves?
Most of the areas I’m photographing are quite remote and difficult to get to, which is a big part of why conservation photography is vital in getting the word out far and wide. Here’s a trip from yesterday for example: woke up at 4am, drove four hours to reach a remote valley, bushwhacked and photographed from dawn to dusk in a beautiful grove of giant trees that sadly are at imminent risk of being cut down, then a four hour drive back home, arriving at 10pm. The terrain and weather can be challenging as well. There are no trails in the woods or clearcuts so it’s up and over logs, skidding down steep slopes, scrambling through bushes well over your head, getting cuts and bruises from various sharp things, while often getting completely soaked from the rain (it’s a rainforest after all). But on the other hand, being alone in a forest that looks like something out of a fairy tale can also be one of the most peaceful and serene experiences a person can have. You’re surrounded by five hundred to one thousand year old trees, colorful little mushrooms, sunbeams cascading through the foggy air – it’s worth every bit of effort. Especially knowing that it might not be there the next time you arrive. 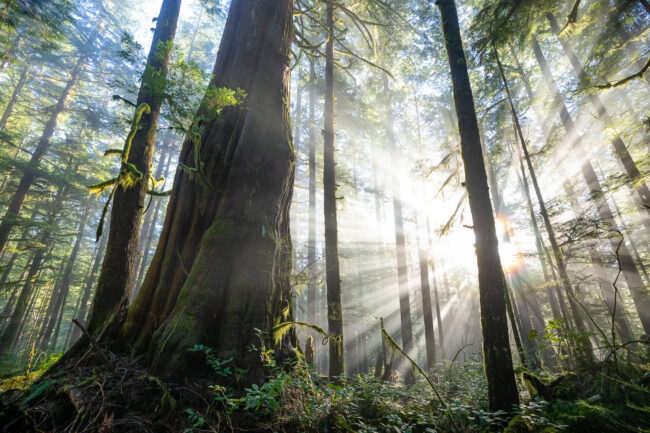 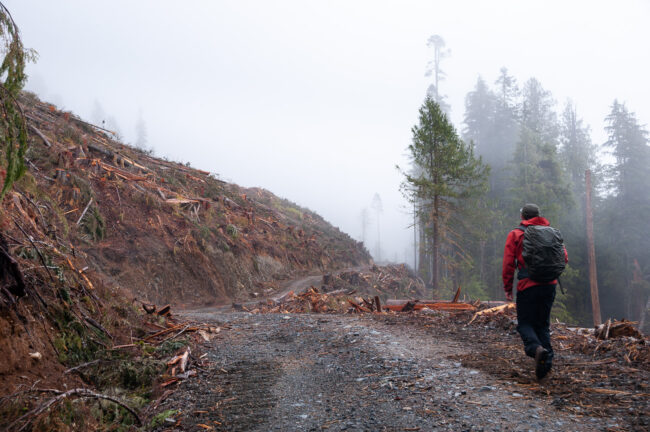 “Art is the highest form of hope,” is a line first expressed by the German painter Gerhard Richter in 1982, with your photography what are you hoping for?
My hope is to make people stop and feel something. I believe art can open doors into a person’s heart where it might otherwise be closed. Once that door is open, new information can be allowed in, including ideas and views they might not previously have been open to receiving.

My hope also is to expose the magnificent beauty and continued destruction of highly endangered ancient forests in BC to as wide of an audience as possible, ultimately helping to bring about the change needed to protect them.

Right now we are at a critical point in the history of the campaign to save ancient forests in BC. The government has accepted – in principle – recommendations from an independent science panel to temporarily defer logging of millions of hectares of the best old-growth across the province, pending approval from First Nations. This is in response to years of public pressure, fueled in large part by viral images we have shared of giant trees and giant stumps. Ultimately, permanent protection is  necessary because, under BC’s current system of forestry where trees are re-logged on average every 50-60 years, old-growth forests are a non-renewable resource. Tree plantations do not adequately replicate the complex and diverse ecosystems that they’re replacing, so we have just one chance to keep ancient forests standing for the benefit of the climate, tourism, wild salmon, endangered species, and many First Nations cultures.

Though it’s sometimes too late to save the trees pictured in my photos, I hope the images motivate people to get involved and advocate for the protection of the forests that are still standing. 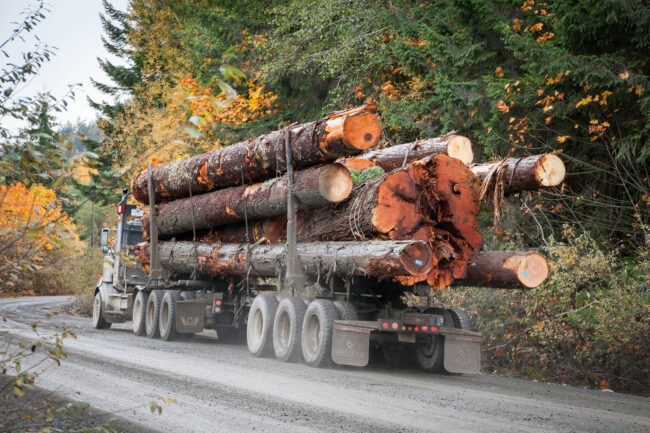 Aside from social media and its ability to scale and tell the uncensored truth of the logging, what other photo based technology are you using to protect the trees?
In recent years I’ve found the use of drones really helpful. Technology has come a long way and now in as little as five minutes you can be up in the air, surveying and photographing forests or clearcuts from above. It’s such a unique perspective and cheaper/easier than flying. My next experiment with drones is to try and retrace flight paths after a forest has been cut to fade between the standing and fallen trees. Trail cameras are also pretty handy as well. I’ve just experimented using the basic game cameras you can buy online but they’re proven useful at capturing images of wildlife such as black bears and elk undisturbed. I keep hoping for a photo of a cougar. 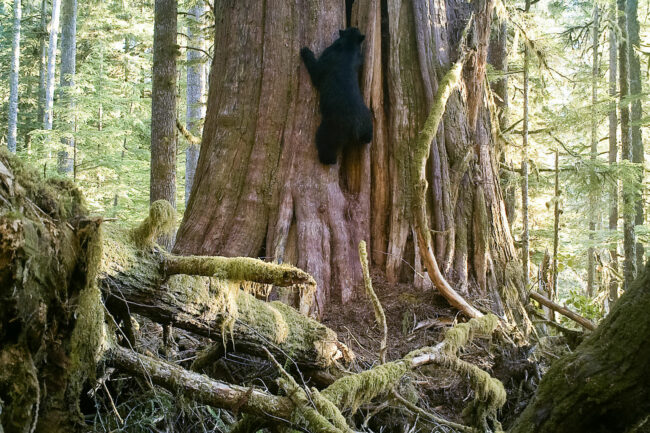 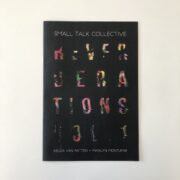 This Week in Photography: Festivals Are Back

How to help the people of Ukraine