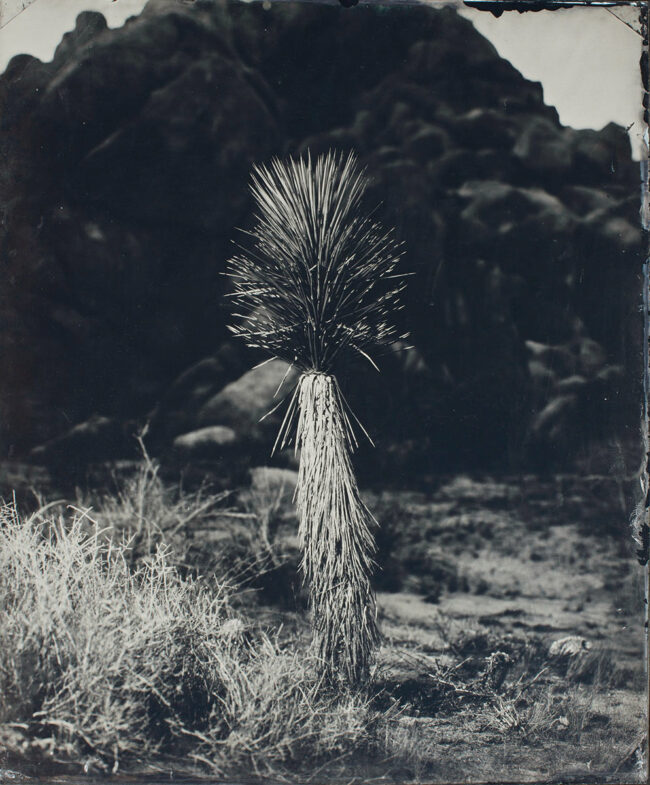 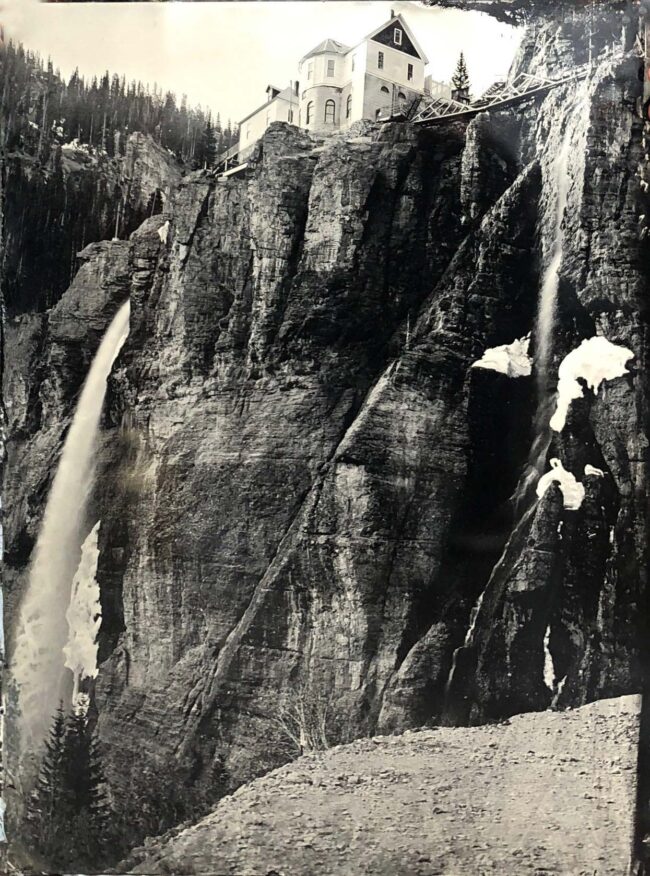 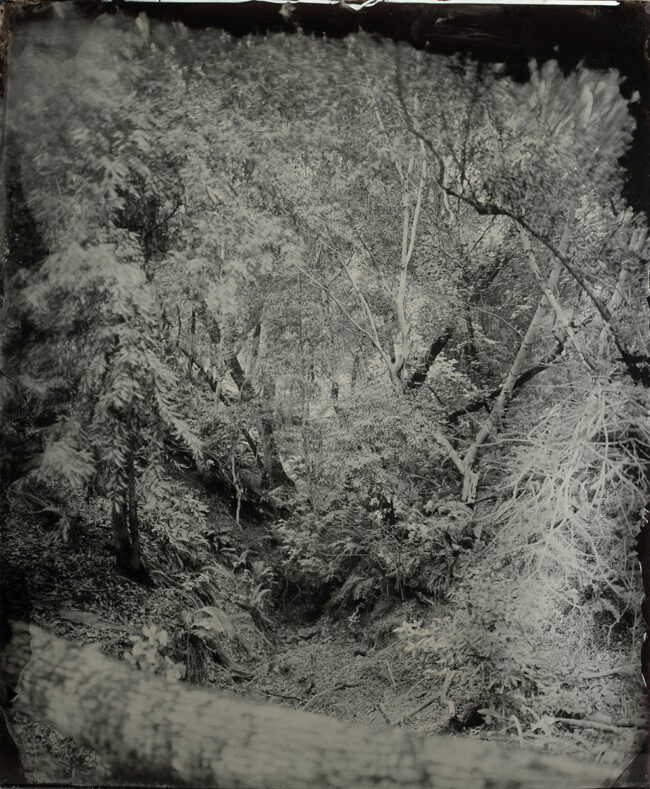 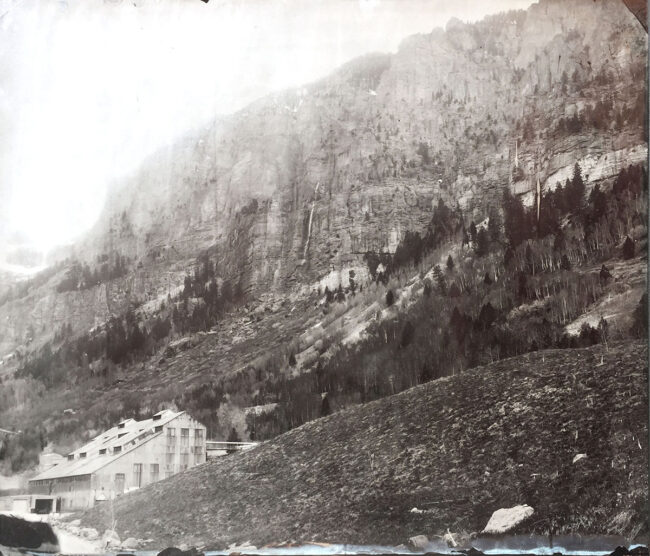 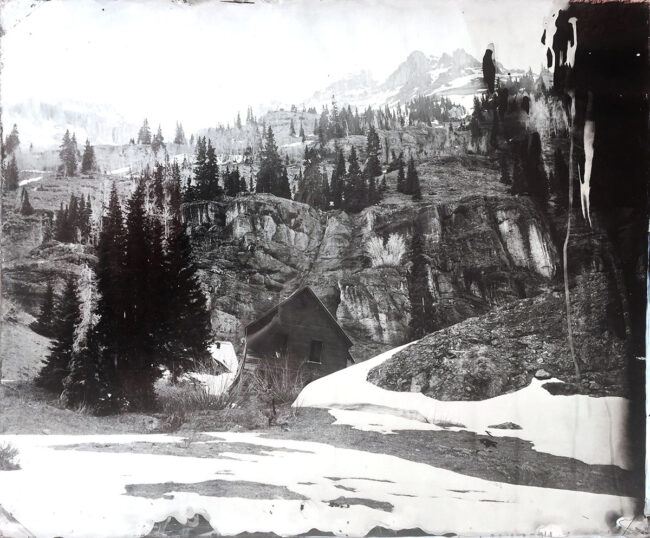 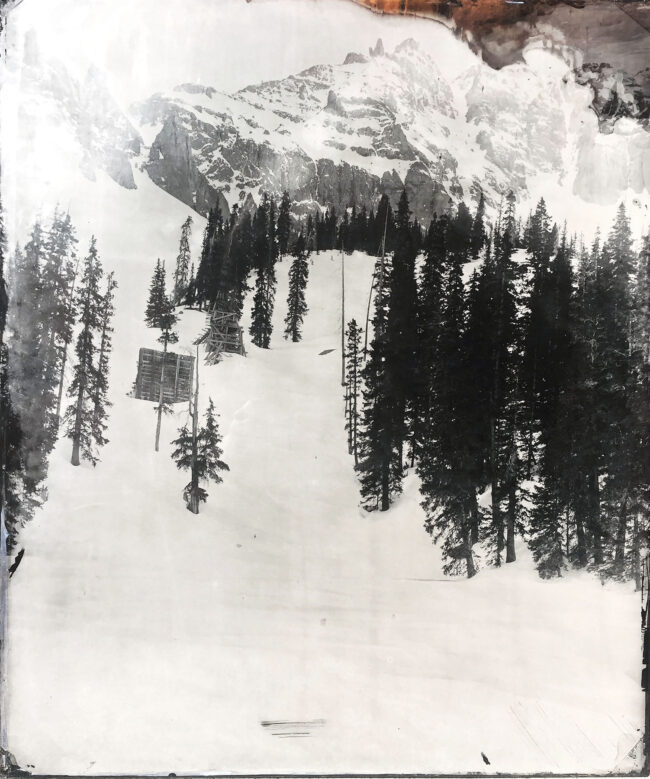 Heidi: Who pours your plates?
Lindsey: My mentor told me he was the only one who had the “wingspan” to pour and develop a plate that size.  And people sometimes ask me if an assistant pours the plates for me.  No, I pour and develop the plates. Actually, I look forward to the day when someone pours my plates and I can focus more on directing the shoot.  But for now, yes, as a 5 foot 4 inch woman I pour the 32x24in plates.I mention this to underscore that physical stature is not an absolute for pouring plates.  I think it is more about balance than it is about wingspan.  Furthermore, I don’t think just because you pour your own plate by yourself it makes your work more legitimate than those who do not.  Perhaps, I won’t always pour my own plates and it won’t make me less of a collodion artist for it. 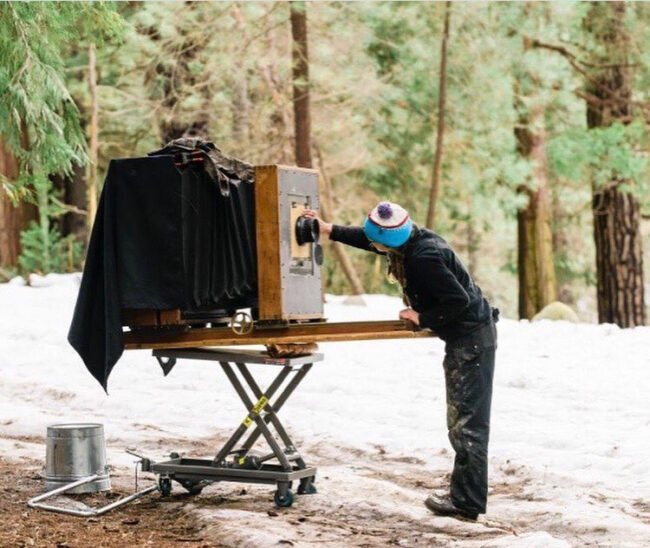 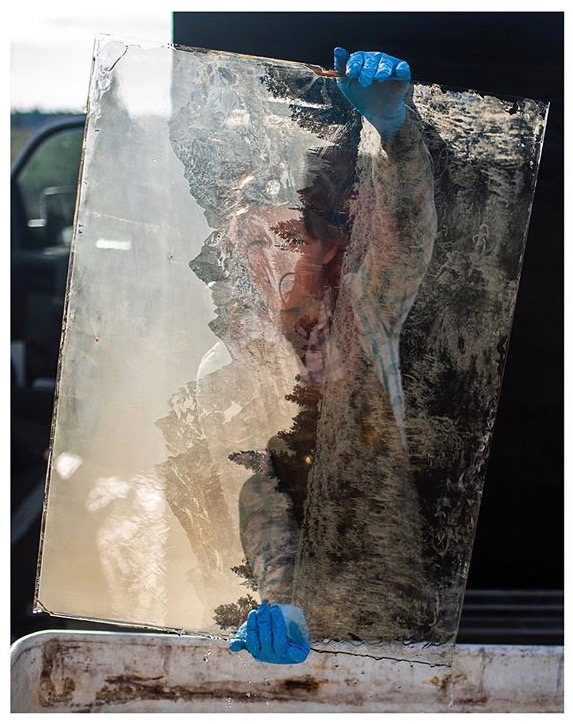 When did you start the landscapes of the mining ruins?
In June 2016 I had started taking 20x24in landscapes of mining ruins in Telluride, CO.  This particular photo was taken up at the Tomboy Mine.  This mining ghost town was bustling in the 1880’s with a population of about 1,000 people. The town sits at 11,500 feet high above Telluride.  I started photographing the mining ruins because the landscape and mountains are so dramatic and grand and I was drawn to the mining ruins. They were shiny, like jewels adorning the mountainside. And despite being 140 year old and existing in a harsh environment, the ruins were really well-preserved. 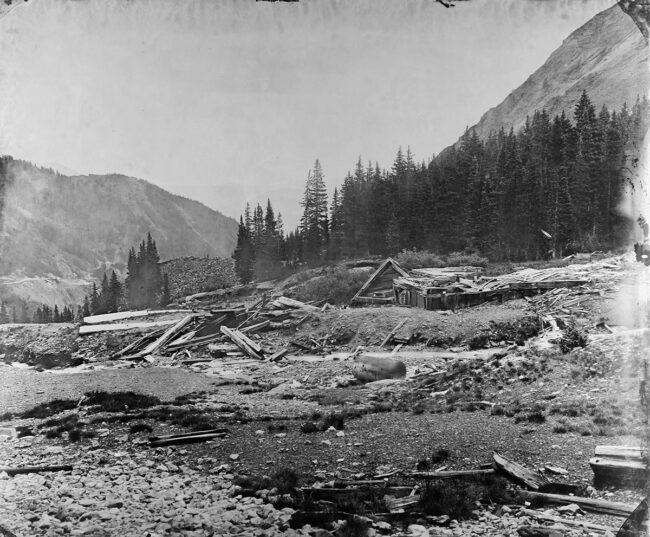 This was all a part of a body of work of high altitude mining ruins for an exhibition with my friend and artist R. Nelson Parrish in September in Santa Barbara.  After shooting mining ruins near Telluride I wanted to shoot some mining ruins in California.  The highest altitude mining ghost town I could find was Cerro Gordo which sits at 7,000 ft above Death Valley.

How are you getting all your gear to these high altitude locations?
I was given permission to shoot at Cerro Gordo, which is several miles up a steep, windy canyon road with sharp cliffy drop offs.  I was driving my 1992 F-250 truck with all of my equipment in the bed, scouting locations to take ambrotypes at Cerro Gordo.  On my way down the canyon I started gaining speed and tried to slow down.  I realized my breaks stopped working.  I pulled the emergency break and that was not working either.  I gained more speed and realized I didn’t have my seatbelt on as I barrelled over rocks and lifted off the drivers seat.  Careening down the road I realized that I might have to bail out of my vehicle if I could not stop since the road was winding so much.  I came around a tight turn and saw a gravel pile and drove right into it.  The gravel pile stopped my truck.
Tell us about the perfect diagonal crack.
I was safe but shaken.  Some pieces of my equipment had fallen out of my truck, several sheets of glass stashed behind the passenger seat had shattered.  The plate from Tomboy Mine which was behind the passenger seat was broken in a perfect diagonal. 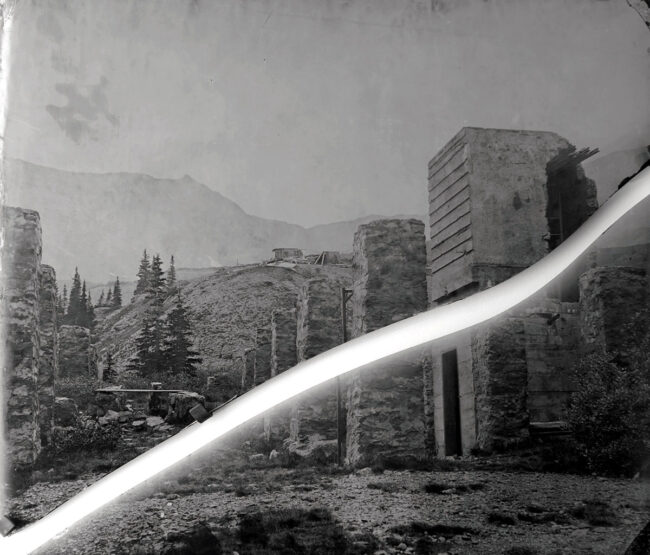 How did you get the gear to the location after you totalled your truck?
My friend who was assisting me, Macy Pryor and Telluride local, came to pick me up.  I had totalled my truck.  We still shot up at the mine with the help of some locals who hauled my equipment.
Nymph images in the trees (ongoing)

This body of work started with an accidental photo when I was on a weekend trip with some of my friends.  Coincidentally I brought my photo equipment on the trip and set it up.  And the shot just happened.  A big part of my work is about my physical labor and struggle to make it.  I have always felt struggle was necessary for me to make work.  And the first Nymph photo happened kind of effortlessly – a feeling that was new for me in my work and something I felt I should follow.   It also marks a point in my career (Spring 2017) when I was ready to depart reality due to the overt racism and sexism that was revealing itself in our culture and politics. 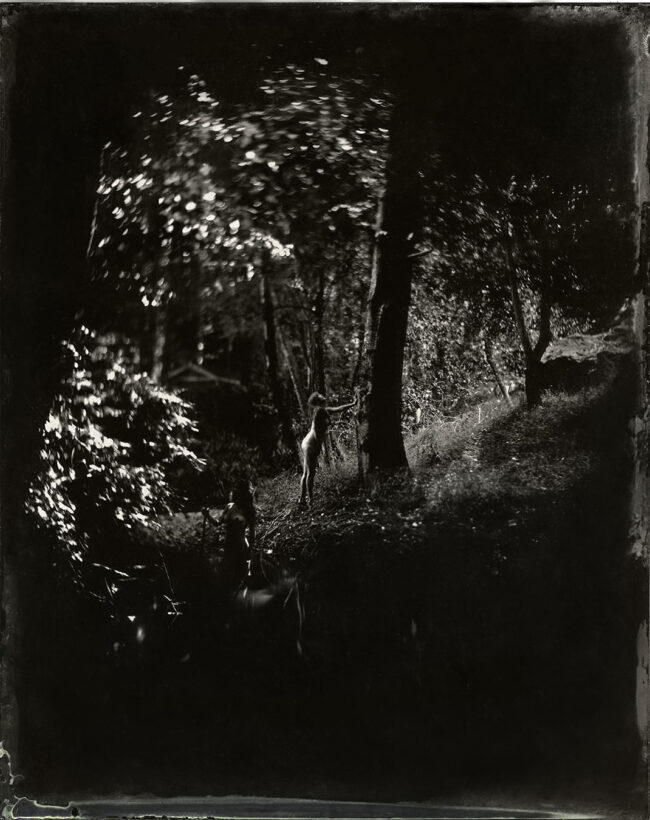 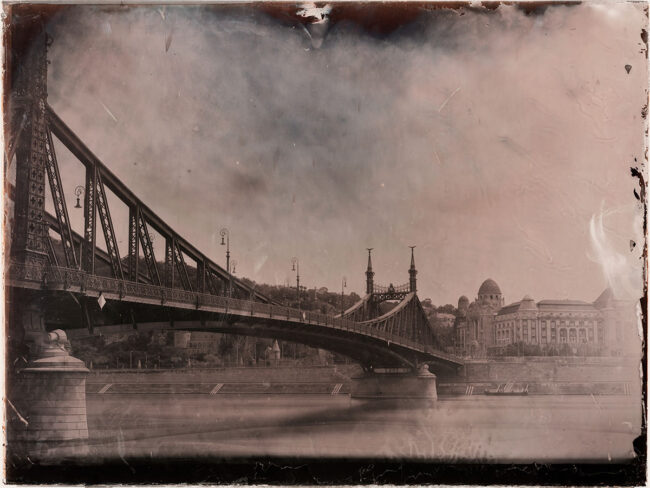