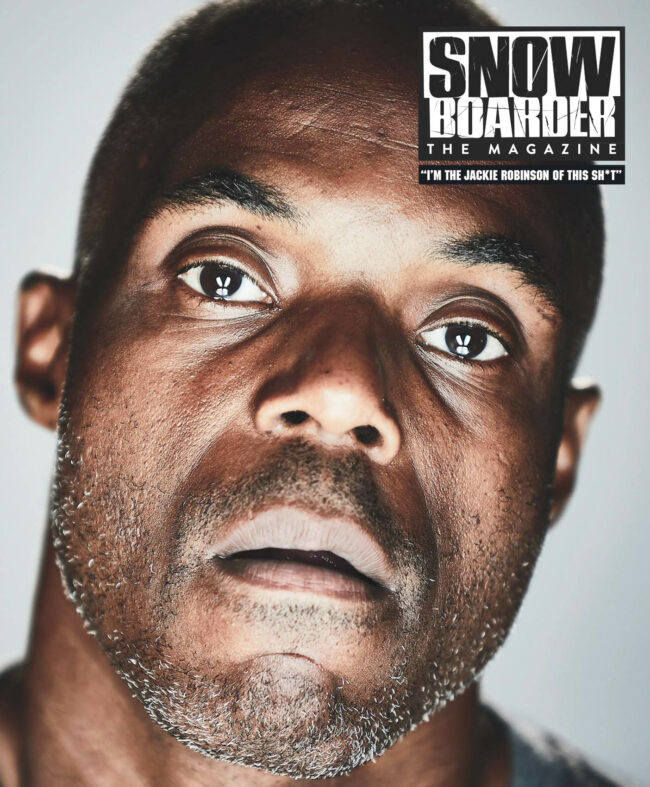 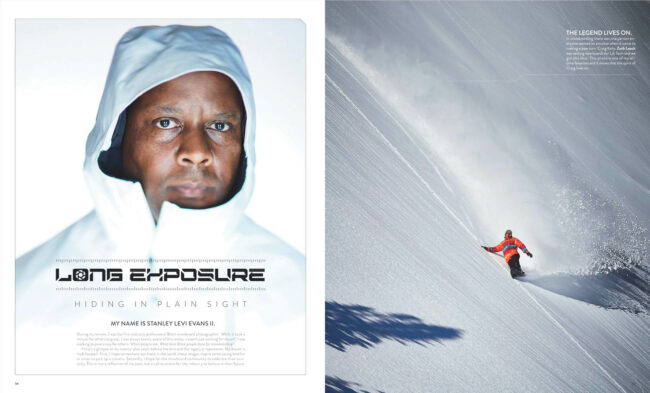 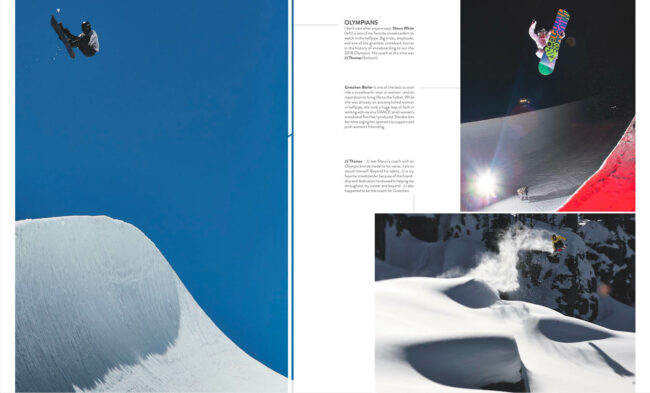 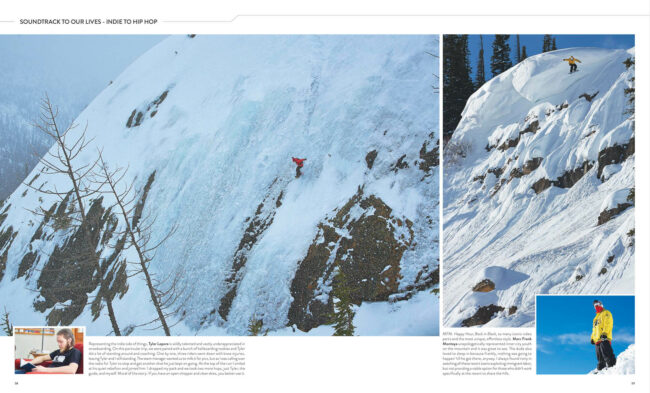 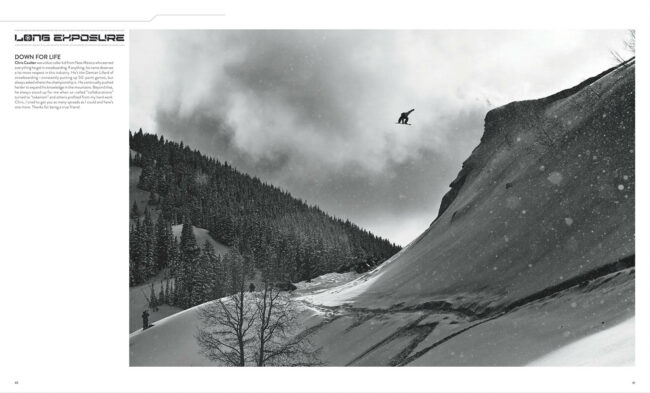 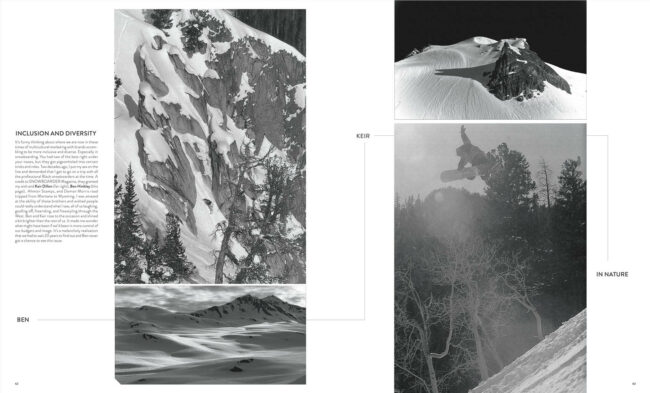 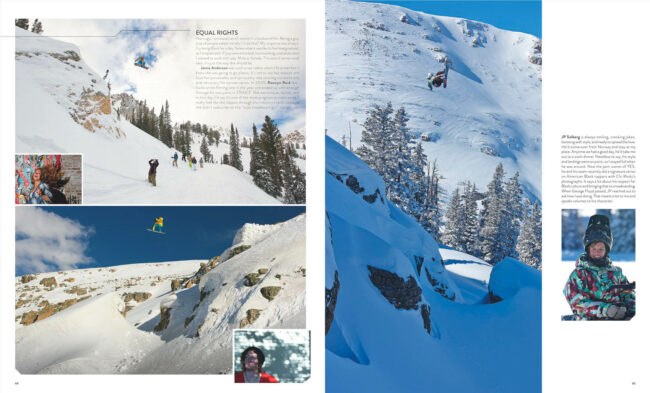 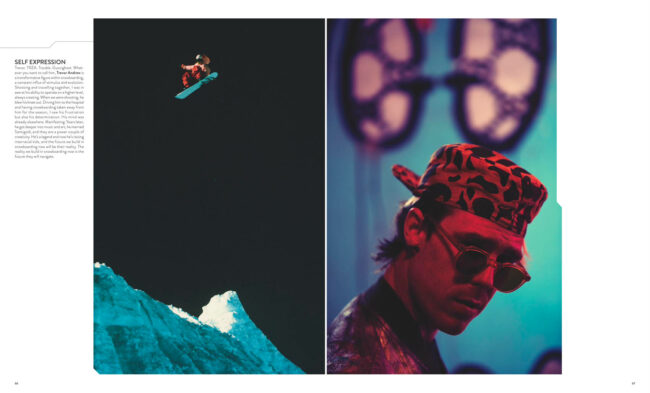 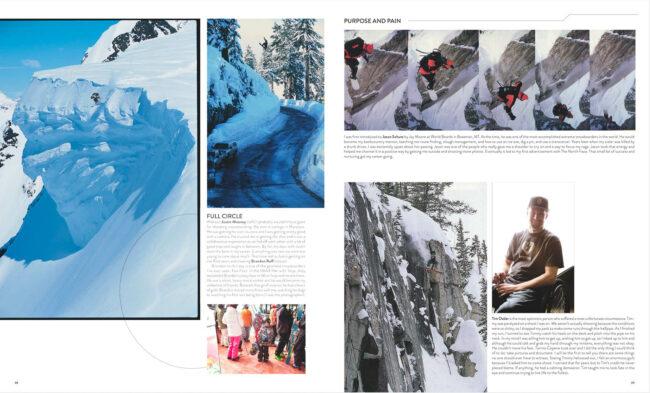 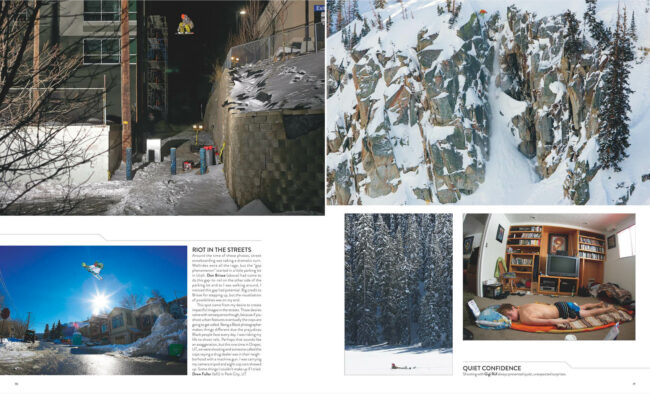 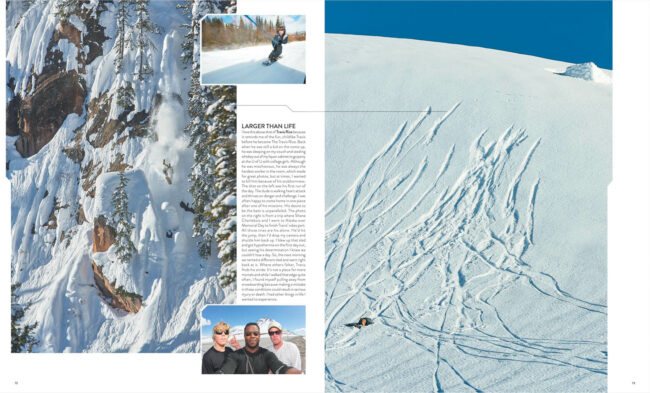 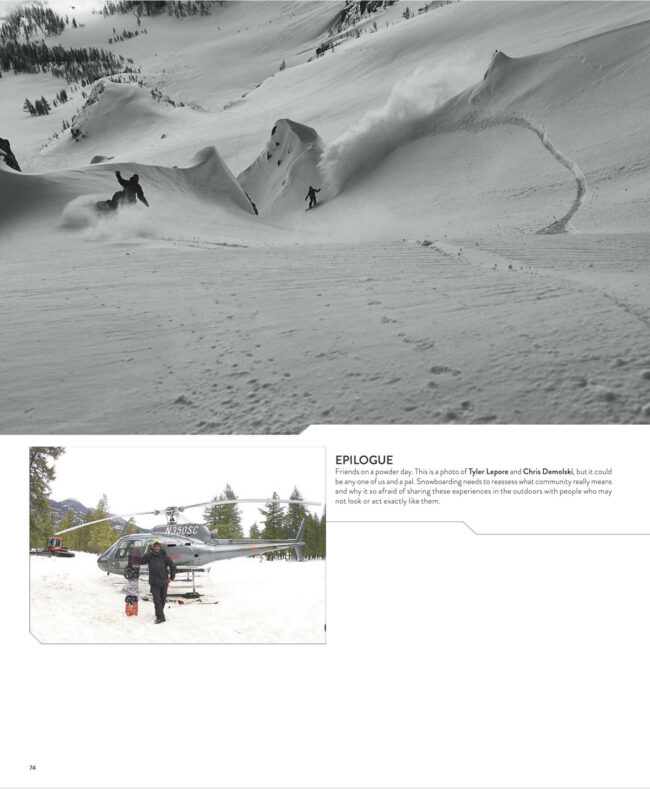 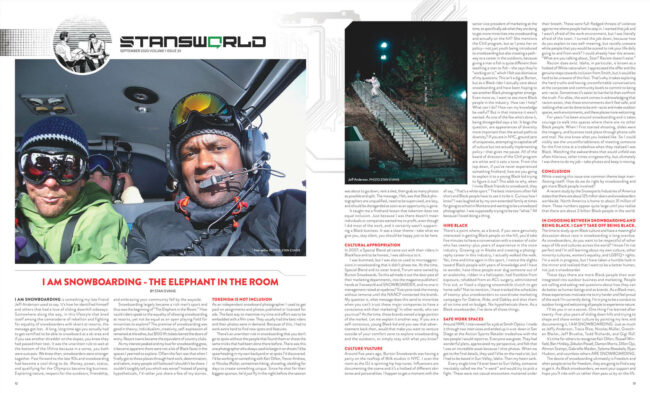 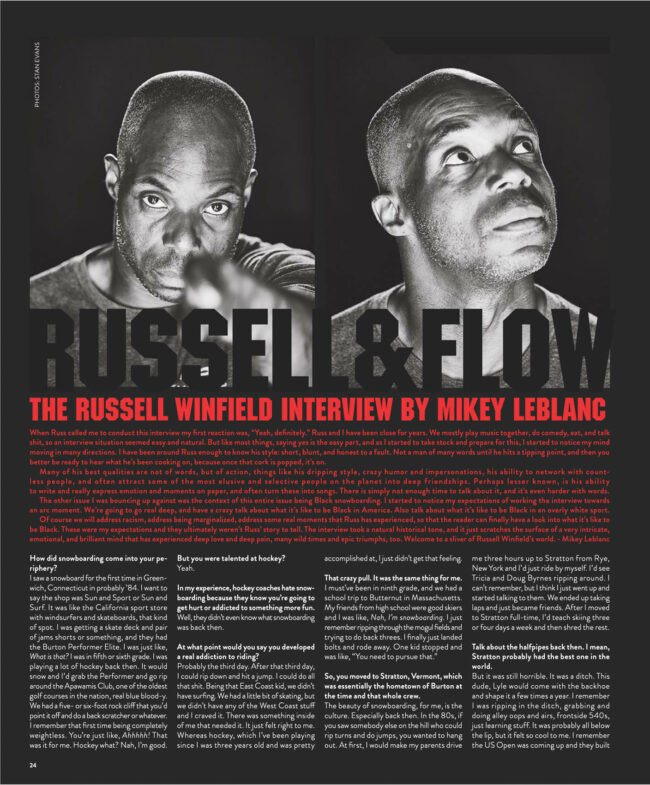 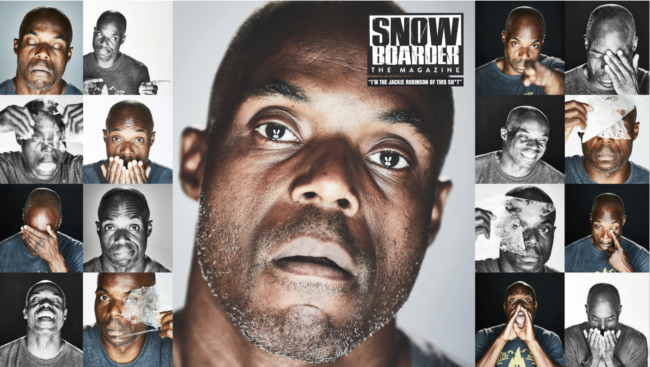 Heidi: Has this issue been healing or a reckoning for your relationship with the snowboard industry?
Stan: I’ll be frank. I love snowboarding. The freedom to explore, to  be in nature to take pictures as capturing unique moments in time with some amazing people but….  As a Black photographer I’d had a bit of a contentious relationship with the snowboard industry as it was very subversively racist.  In the way they marketed the sport and some of the things that happened to me throughout my career. No matter how many amazing photos I’d shoot there was always somebody there that thought because of the color of my skin I shouldn’t be here. People loved the photos but people didn’t want to hear my opinion so everyday was starting from zero and proving myself all over again. Besides being a middle class black kid I didn’t have family money to fall back on so it was  I think it’s important to view this issue and its creation through that lens.  Ironically that became the theme of the “Black experience” of snowboarding throughout the magazine –  we needed to show both sides of the coin, good and bad.

What do you hope to share for those in your tracks?
The most difficult part of being first was not having a path. It’s a lot of trial and error and failure to be honest. There’s potholes out there and I probably hit everyone figuring it out but the tough part is the mental game of picking myself up and trying again. I had some good white mentors in high school and college but they can’t help you in navigating racists in a small mountain towns, other competitors talking behind your back about your photos. Marketing managers or team managers low balling you because they only think you are worth this much. Company employees leaving you on the side of a mountain because they don’t want to give you a ride back to the lodge. You have to develop a mental and physical toughness that nothing is going to phase you and you are going to get right back out there the next day and give %110. I want to share anything I can but the biggest thing I can give is perspective because I lived it.  For black people getting into outdoor marketing and for brands trying to earnestly help having my experience is a huge roadmap. Let’s miss those potholes this time around. Smooth the road for the next generation.

I know you had some reservations, what tipped the scales to say yes?
To be honest It took about 3 weeks of talking before I said yes. To his credit the editor Pat Bridges called and emailed me several times. I revealed several slights I’d had from their editorial staff and in turn their publication in the past which made me adverse to getting involved. In those moments Pat gained some perspective of what it was like being the “only” –  I gave him an earful and he listened. We made a pact to try and right some wrongs with this issue.  Their publisher Micah Abrams also stepped up as I’d worked with him several times over the years and he’s always been amazing to work with. The biggest reservation I had was that David Pecker (the man who buried Trump’s Stormy Daniels story) owns ASC and it troubled me that me working on this issue potentially was putting more money in that guy’s pocket. But if I put my heart and soul into it, would it have a bigger impact than just him profiting? I tend to play the long game these days but on this one I wasn’t sure if I was winning the battle or the war? I had to roll the dice.

What boundaries and qualifiers did you set in order to move forward?
Snowboarder called first about having my portfolio included as I was the only Black Snowboard photographer but I pressed them as to who was overseeing production, we all saw a glaring hole in credibility. They had Dwayne Carter who is black as Art Director in editorial staff but his background is mainly skateboarding really no one to guide the ship to the black “snowboard” experience with a print production background. After some discussion they hired me to consult in the capacity of Contributing Editor.   Within that I shifted the narrative from just showcasing “Black Professional Snowboarders” to how “Black Culture” has contributed to snowboarding? Once we turned that corner we were off to the races.  I helped develop the well, posed the idea of creating a timeline of Black history within Snowboarding similar to Fast Company infographics, we made a selection of creators that contributed to the industry, (team managers, designers, reps, shop employees)  I advised some of the creators on their messaging and I layed out my portfolio. I delivered the basic template to Dwayne via  Indesign and he made it prettier with room for my extended captions.  Once most of those wheels were set in motion it became fairly obvious that I should write the opening oped as well. Stan (their editor) suggested it as a way to pass the mic and as he usually opens the issue with his Column “Stan’s World”  It was an ironically fitting swap. Specifically they paid Cover Shoot expenses, word rate, portfolio and consult time. My mantra is hire Black, let us create, pay us what we are worth. Snowboarder Mag followed through on that promise. It empowered ALL the contributors black, white, male, female, straight or gay and instead of anyone holding back for fear of judgement, everyone gave their all.  That’s why the issue was so profound.

How did the pre-production of this issue help authentic stories come alive and how did you develop trust and community?
I think all of the riders had a personal relationship with the editor Stan Leveille. They all trusted him to give them a safe space to express themselves. Their staff is talented and I’m a huge believer in if you have talented people let them do their jobs. I gave them this analogy. “ You guys are driving the car, I’m just riding along to navigate and help keep you out of the ditch” One thing I did before agreeing to the magazine was have a zoom call with most of the professional riders featured. Most knew me and my history and felt more comfortable with the issue and  telling their stories if I was actually in the building making sure there were no missteps.

How did they editorially make space?
Snowboarder pooled the advertising to the front of the book (the first 4 pages) with simply a logo from each advertiser freeing up room for more Black voices to speak within the volume. It showed a deep commitment from Pat to get each of the advertisers to set aside their products for an issue to tell stories that needed to be told. It allowed for so many voices that don’t get a chance to share their story for a moment in the spotlight.

How will this issue help move things forward in an actionable way?
At the end of the issue they also showcased several nonprofits that work with marginalized communities to get them involved in snowboarding which I found highly important as they highlighted resources for people to get involved in continuing the work.

How did the issue come together, how many years of work did you look through?
The editor and photo editor went through archives of my past work which ranged past 20 years and I went to the office to shoot the cover, sit in on production,  review copy and art direction with the editorial staff. Originally the mag was going to  be in 2nd issue with an October release but they moved to the first issue which sped up my timeline line. I had 3 weeks to complete my work while working on 3 other photo / video shoots simultaneously. So it was a push. I didn’t sleep much that month.

What was the biggest hurdle to overcome in creating this issue?
There was a lot of reconciliation, sharing of responsibility and effort to get things right. Beyond being proud of the mag I was proud of how the staff approached it.  They insured and created a safe space for me to do my thing (not to say there weren’t a few head butting moments) but for the most part, everyone came together to make something great.

What are some emotions that come up when you think about the title of “Only Black Man in Alaska?”
The “Only Black Man In Alaska” is a play on stereotypes. Whenever I tell someone I grew up in Alaska inevitably they go for the (drumroll please) “You must be the only Black Man in Alaska?” joke. I figure at this point I might as well own it. I loved growing up in Alaska. Moving there as a young child literally changed my life. So I felt it was an appropriate title for BTS on the shoot and my past.  For the cover shoot I suggested we have a BTS video team just covering the shoot process. This was a once in lifetime moment  having the first black professional snowboarder shot by the first black professional snowboard photographer. We should have it on video for posterity. The interview came  about spur of the moment.   Their editor Stan Leveille actually came through with some poignant questions for me and we shot it one take.