Concept: Stills and video content featuring seven athletes participating in various sports, as well as images of each athlete posed with product.

Licensing: Unlimited use of all images captured for 2 months from first use. 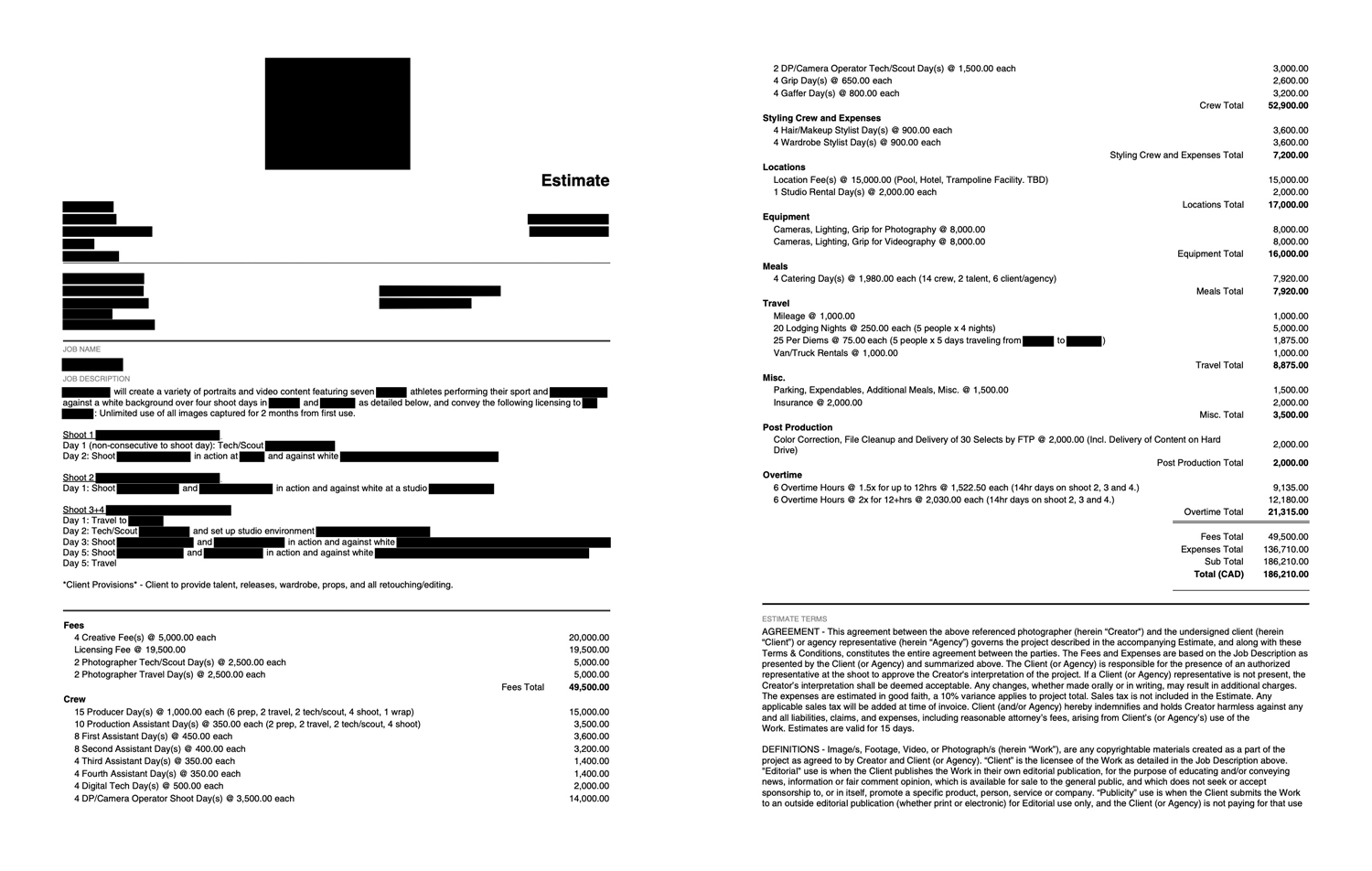 Creative/Licensing Fees: The scope of the project included stills and video to capture seven athletes participating in five unique sports over four shoot days in two different cities. Each athlete had unique needs in terms of gyms/facilities where they would need to be captured, and the need for posed shots on white led to some unique scouting and location needs. Some of them could entirely be captured in a studio, and others were a combination of them at a facility where a seamless background would be set up.

The creative needs called for a specialist who was technically savvy and could photograph/direct athletes who had limited time. These needs, along with the large agency/client, put upward pressure on a creative fee (which they asked us to break out from a licensing fee, as opposed to combining the two numbers), and we landed on $5,000/day for each of the four shoot days. While the high exposure and request for all images captured put upward pressure on the licensing fee, we knew that they had hoped to get about 30 total images, and would likely use just two for each athlete. Additionally, while they asked for unlimited use, the duration was very limited with a request for just two months. With those factors in mind, and based on previous experience, I thought that around $3,000 per subject or less than $1,000 per image for 30 shots would likely be appropriate. We initially settled on $19,500 for a licensing fee, which broke down to $650/image for the 30 shots we had been discussing, and just under $1,400/image for the 14 shots they were likely to use (7 athletes X 2 shots each).

On top of the creative and licensing fees, we included two travel days and two tech scout days based on an itinerary we detailed in the job description.

Producer Day(s): While the talent would be provided and the styling would be minimal, this project had a ton of moving pieces, and the logistics required a seasoned producer to lend a hand. We included six prep days prior to the travel/tech/scout/shoot days plus a wrap day.

Production Assistant Day(s): We included 10 days, two of which would be prep days to lend a hand with whatever tasks arose, plus the travel and shoot days.

Assistant Day(s): We included four assistants in total, two of which would travel with the team to both locations, and the other two would be locals and just be needed on the individual shoot days. Given how fast the team would have to move, the multiple setups/scenarios that would be needed, and the equipment requirements, we needed a lot of hands-on deck.

Digital Tech Day(s): We’d hire a digital tech locally in each city, and this accounted for each of the four shoot days.

DP/Camera Operator Day(s): We included $3,500/day for each of the four shoot days, and $1,500 for two travel days. While the photographer would be capturing stills and directing the video, we felt it was important to have a separate person actually capturing and focusing on the video content.

Grip and Gaffer Day(s): To assist the DP/Camera Operator, we included a grip and a gaffer to help with equipment and electrical needs, hired locally for each shoot day.

Hair/Makeup and Wardrobe Stylist Day(s): The subjects would be providing their own wardrobe and would have minimal hair/makeup needs, so we just included a single hair/makeup stylist and a single wardrobe stylist, hired locally in each city, just for the shoot days without any prep/wrap time or expenses.

Location Fees: This was a big TBD, since we were told that that the athletes might be able to leverage relationships with various training facilities for scouting purposes, but we needed to account for the payment of those facilities in our budget. We ballparked some numbers here, and also added $2,000 for the day where we’d just rent a studio instead of shooting on location.

Equipment: We included $8k for both photography equipment and video equipment, based on $2,000/day for four shoot days.

Catering: We anticipated about 22 mouths to feed each day and included $90 per person to include breakfast, lunch, craft and additional meals to support a long day with overtime.

Travel Expenses: I based this on the schedule detailed in the job description and the number of people that would be traveling to each of the locations. The cities were within driving distance, which eliminated the need for airfare.

Parking, Expendables, Additional Meals, Misc: I included $1,500 here, truly as a buffer for unforeseen expenses that might arise throughout the production.

Insurance: A loose rule of thumb I use to calculate insurance is to base it on 2% of the expenses. In this case that was closer to $3k, but I wanted to come down a bit as it was feeling a bit excessive, so I included $2k.

Post Production: We included $2,000 to handle basic processing of 30 selects. The agency would handle most of the retouching, and this just included both color correction and file cleanup but would still take a decent amount of time to sift through the images and perform those tasks.

Once the photographer and I finished collaborating on these numbers, we looped in a local producer to further tweak the fees/expenses based on local knowledge and preferred logistical approaches. Overall, she bumped up the estimate by about $12k, bringing the bottom line just under $200k.

Results: The photographer was awarded the project…but then the COVID-19 pandemic hit. This led to a lengthy process of uncertainty regarding how to tackle the project. Since the dates for each part of the project were spread out, they had discussed canceling some dates but just postponing others, and each day brought a new update on how it might shake out. Surprisingly, given the size of the agency, their purchase order didn’t detail any sort of cancellation policy, so we stuck to the cancellation policy in our terms/conditions. At the time when they asked us to formalize what a cancellation agreement might look like, we were a few days out from the first shoot date, with the next trip schedule just over a week away. They asked us to focus our cancellation fees/expenses on just these first two projects for now, hoping to just push the later shoots/dates. Here is what we came up with: 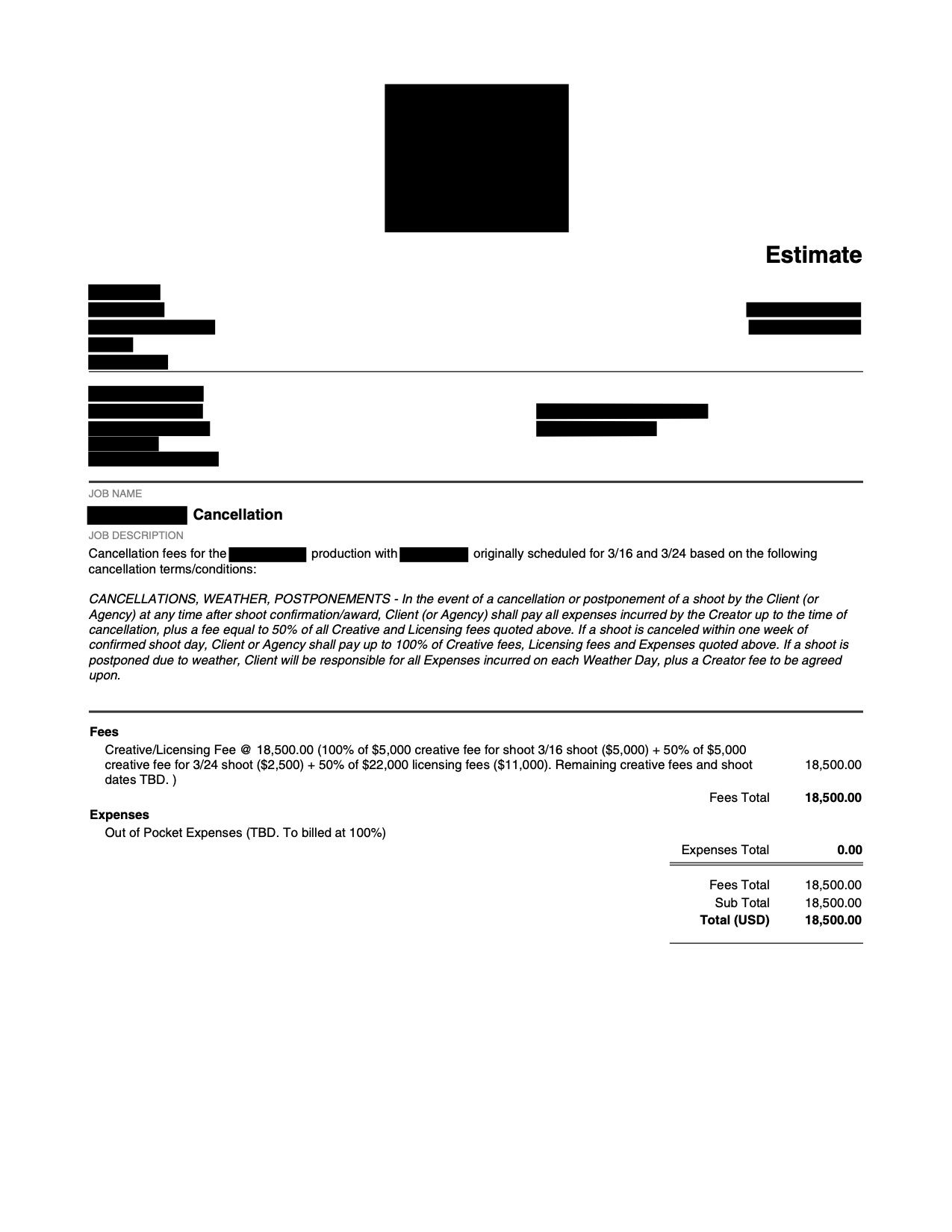 I noted that the out of pocket expenses would be billed at 100% and handed this off to the photographer’s producer to help detail what those exact expenses were, and she tackled it from that point on. Ultimately, they cancelled the entire project. The photographer was able to charge part of his creative fees, half of his licensing fees, and all out of pocket expenses based on how our terms/conditions were worded.

If you have any questions, or if you need help estimating or producing a project, please give us a call at 610.260.0200 or reach out. We’re available to help with any and all pricing and negotiating needs—from small stock sales to large ad campaigns.

The Art of the Personal Project: Stephen Wilkes