Concept: Employees at work in an office space

Licensing: Web Advertising and Web Collateral use of up to six images for one year

Agency: Small, based on the West Coast 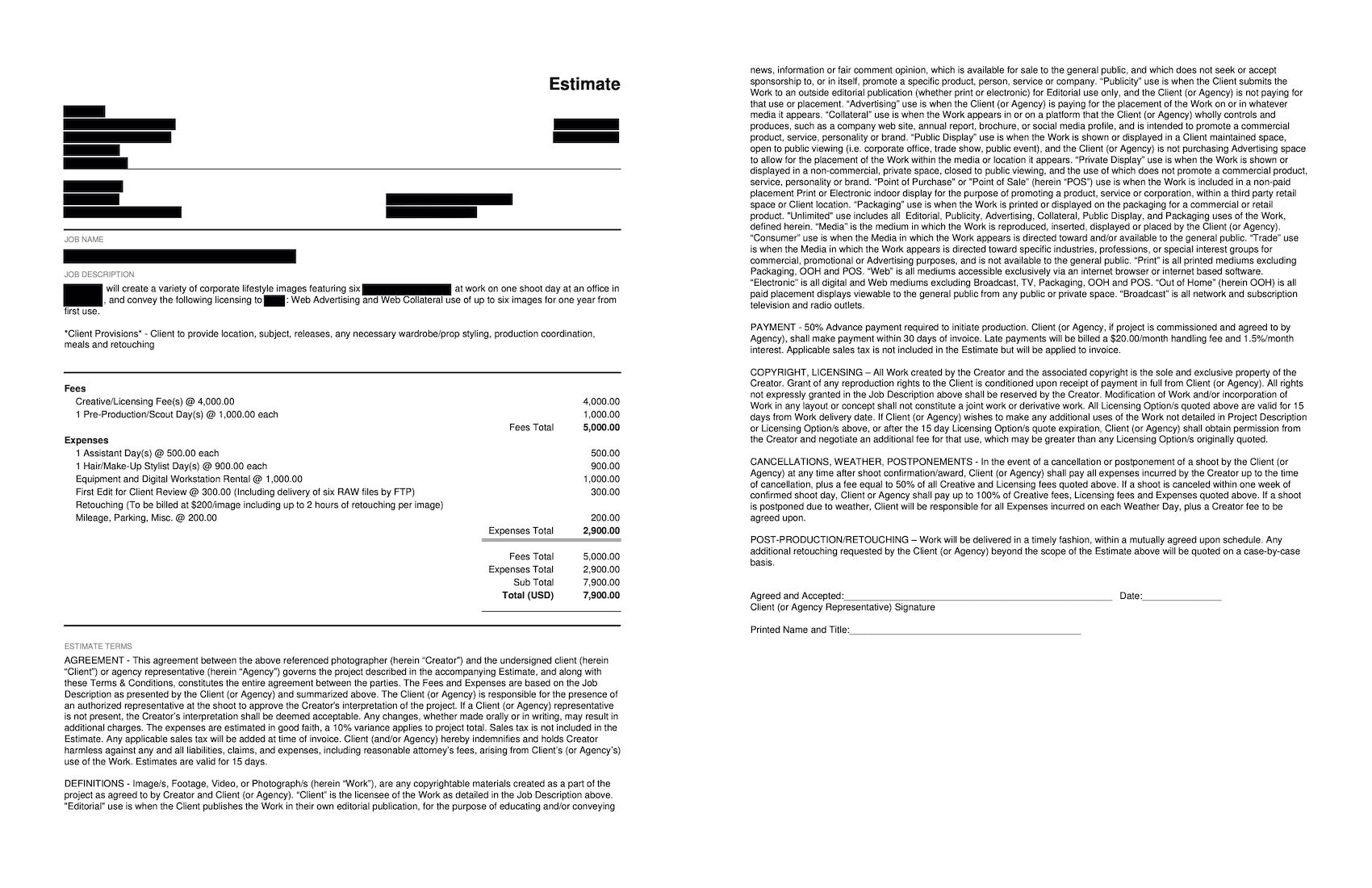 Creative/Licensing Fees: The original project scope included corporate lifestyle images of six employees at work, and they hoped to license one shot of each employee for use on web ads and placement on their website for one year. Based on a conversation with the agency, I knew this would be a low-profile project for them and therefore have a tight budget. I started at $500/image, and while I wanted to add at least $2,000 as a creative fee, we decided to cut that in half and go with $4,000 as a combined creative/licensing fee.

Pre-Production/Scout Day: We included $1,000 to account for the photographer’s time to line up his crew and briefly visit the office to see the space beforehand.

Assistant: We included $500 for an experienced assistant to help lend a hand for the shoot day.

Hair/Makeup Stylist: $900 was an appropriate rate in this market for a stylist to make sure each subject was presentable and camera ready.

Equipment and Digital Workstation Rental: The photographer would have minimal equipment, and this accounted for his cameras, lenses, grip, lighting and a laptop for the client to review the images as they were being captured.

First Edit for Client Review: This accounted for the photographer’s time to do an initial edit and provide the client a web gallery of images to review, as well as delivery of six images by FTP.

Retouching: We were asked to detail a rate for retouching as an option, but not include it in the bottom line, so we noted a fee of $200/image should the client decide to outsource the post-production to the photographer.

Mileage, Parking, Misc.: This included a light lunch for the photographer and his two crew members, as well as some buffer funds for unforeseen expenses.

Feedback: A week later we were asked to revise the estimate and reduce the number of subjects from six to three while maintaining six shots (two per subject). Additionally, they requested perpetual use, rather than usage for just one year. I considered that perhaps the second shot per subject was less valuable than the first, but ultimately decided to base this new request on a per image fee of $1,500 each ($9,000 total). Prorated, the original $4,000 fee broke down to just over $650/image, so more than double this amount per image felt reasonable as a fee for perpetual use. While I might typically triple (at least) the price to go from one year to perpetual use, I felt that the shelf life of these images was just about a year or so as the subjects would primarily be working with technology in the images, which would quickly become out of date. 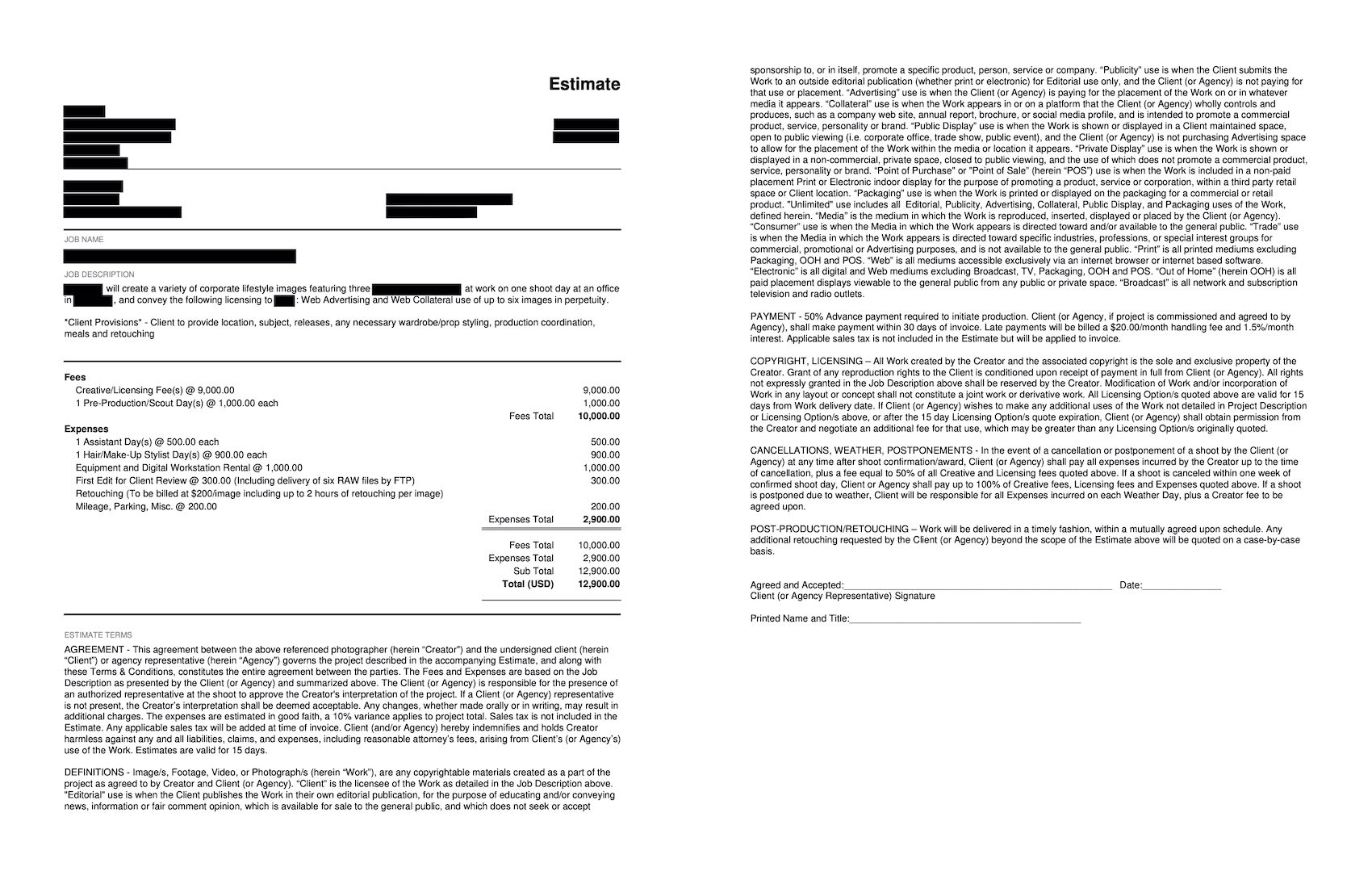 Feedback: We were told a few days later that the project scope was being tightened up to include just two subjects, and they wanted two images per subject. We were also told that they were hoping to keep everything under $10k. Based on $1,500/image, we included $6,000 as a creative/licensing fee. They also asked us to include basic post-processing for these images, and we added $150/image for the light retouching. 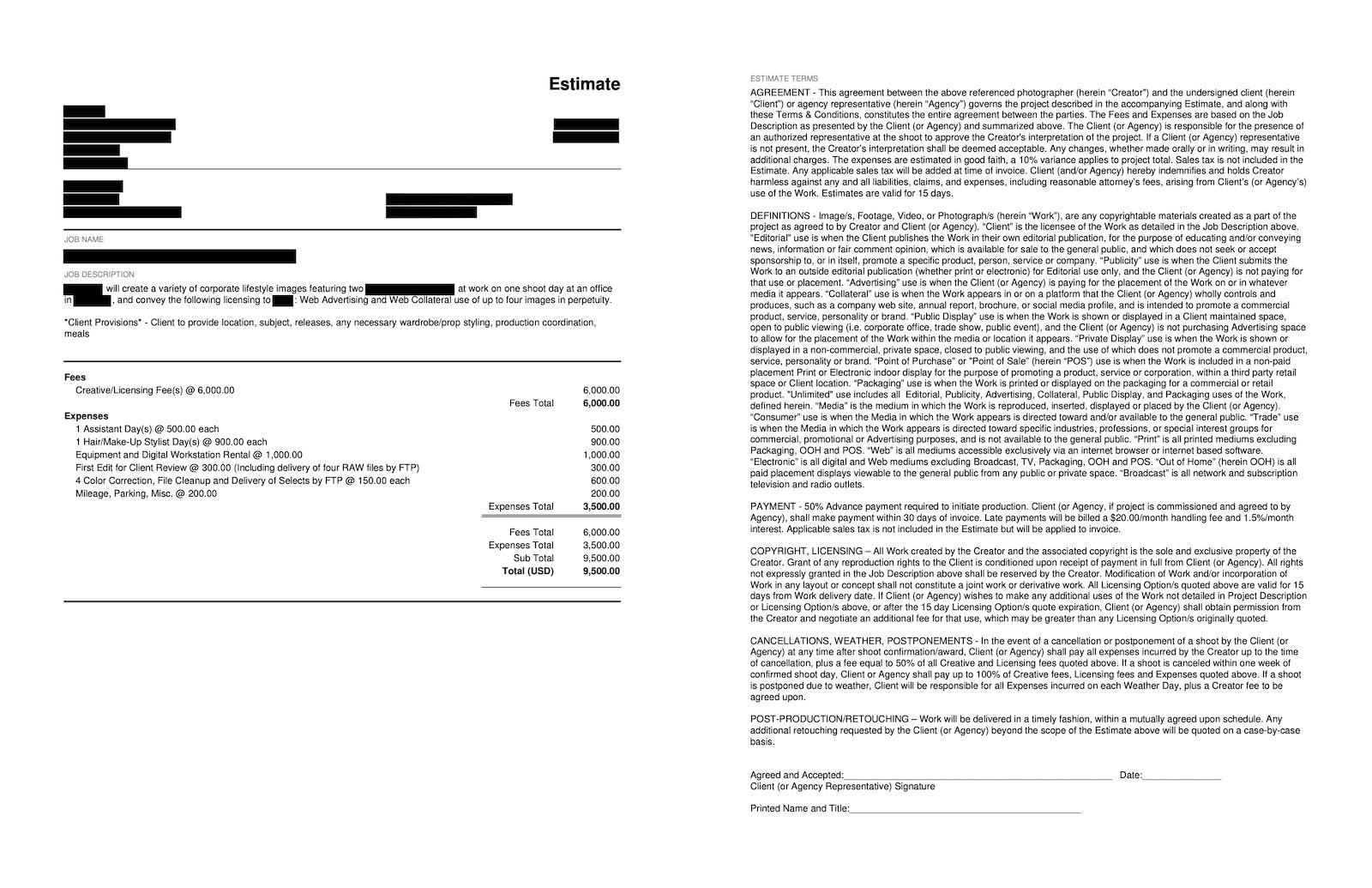 Results: The photographer was awarded the project.

If you have any questions, or if you need help estimating or producing a project, please give us a call at 1 610 260 0200 or reach out. We’re available to help with any and all pricing and negotiating needs—from small stock sales to large ad campaigns.

The Art of the Personal Project: Clemens Ascher