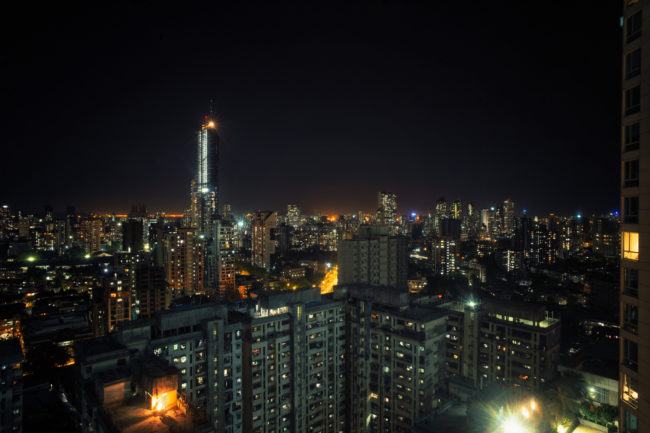 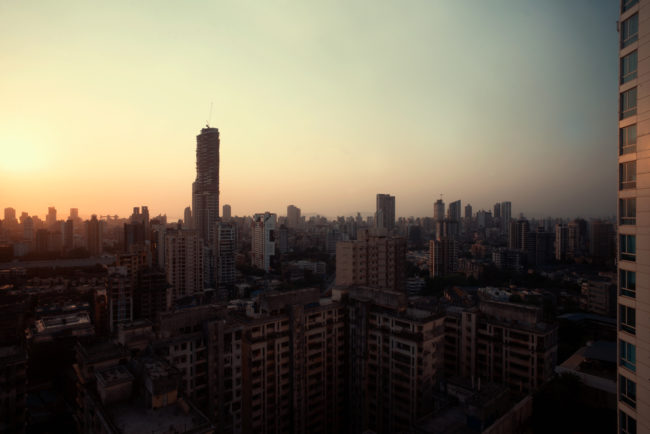 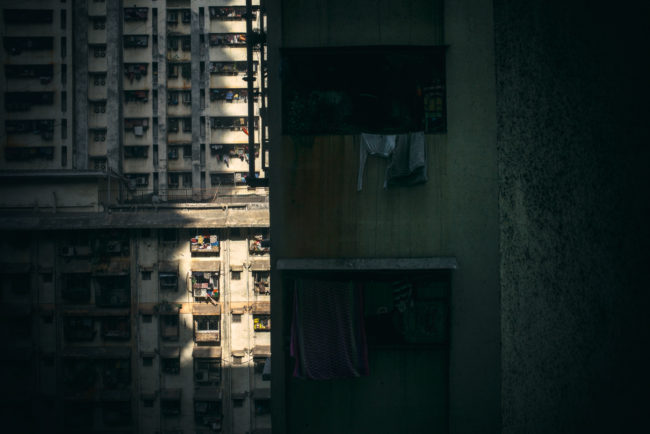 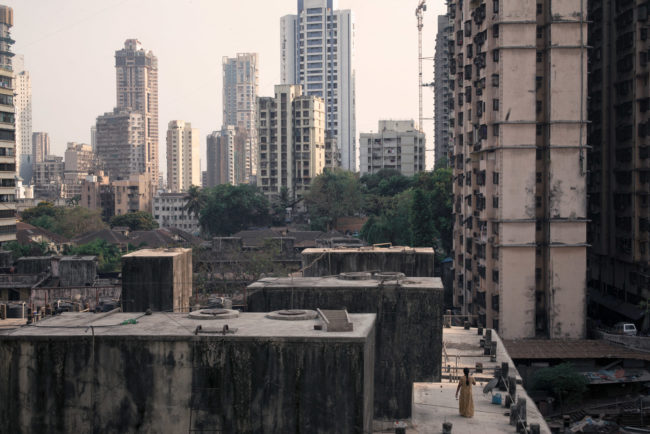 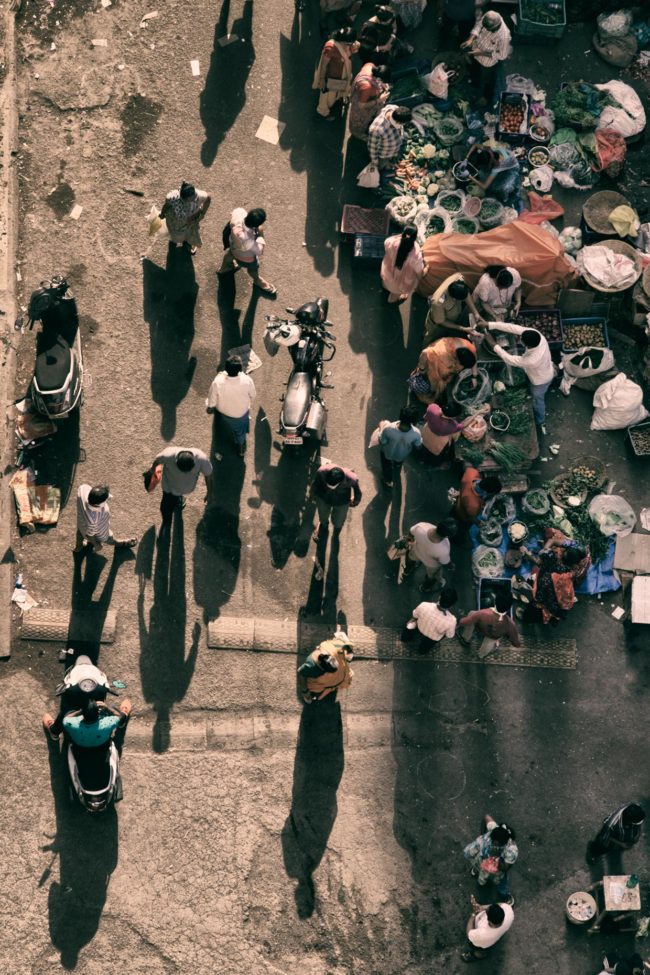 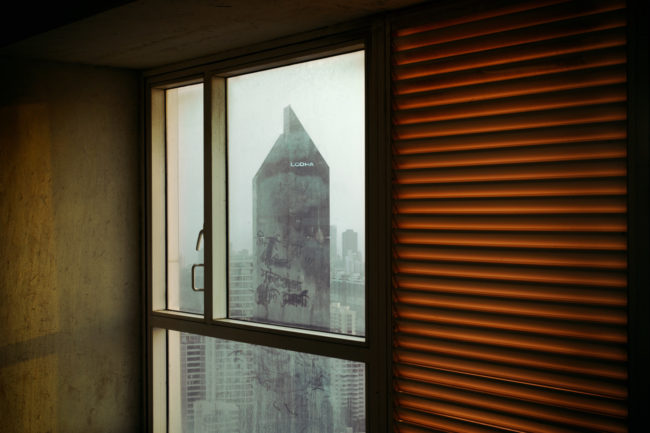 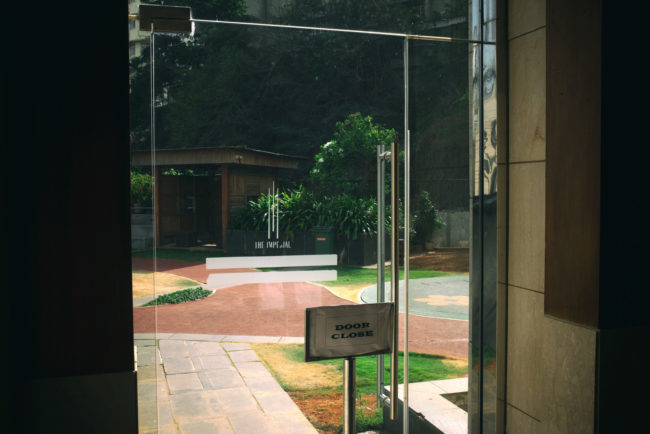 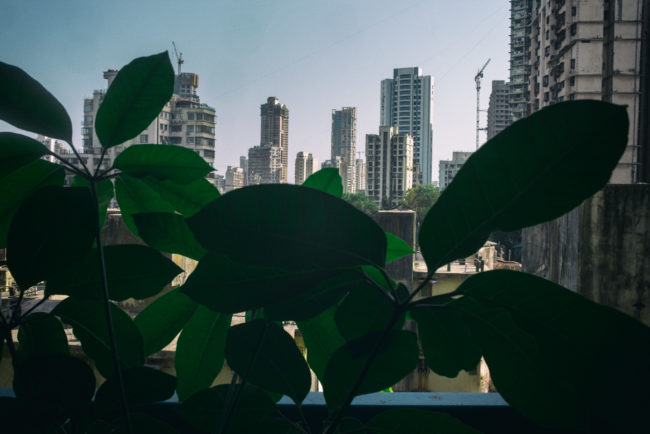 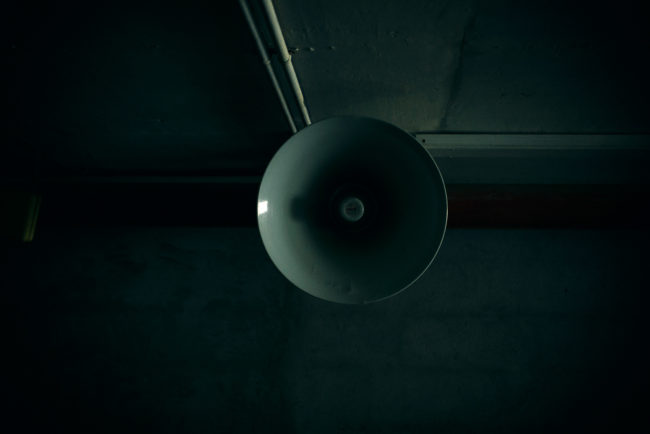 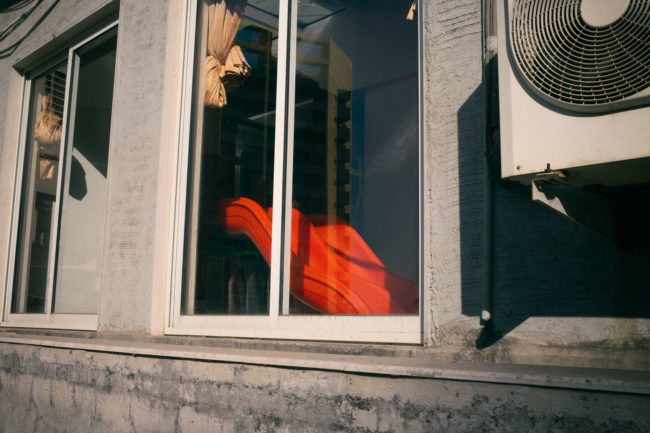 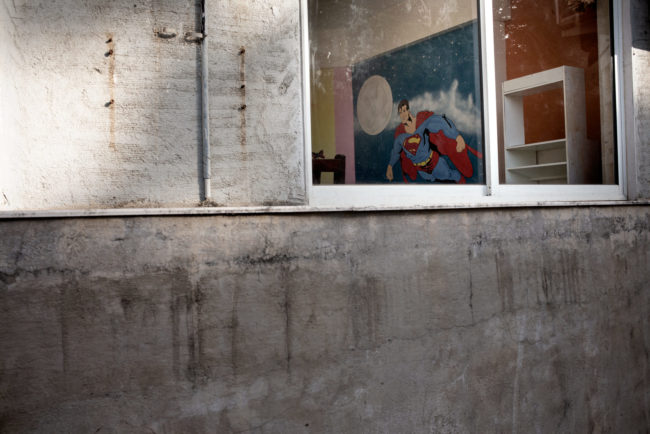 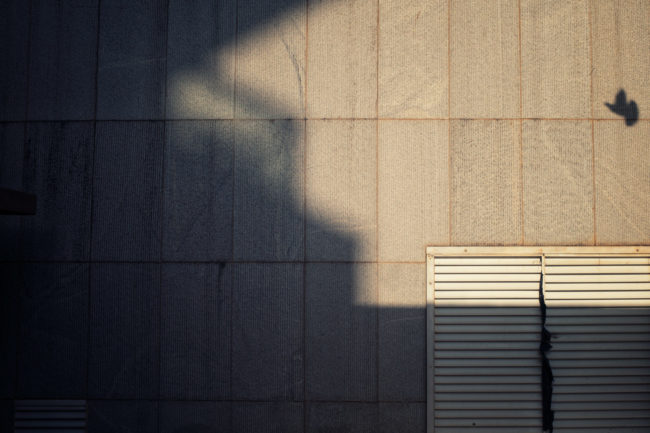 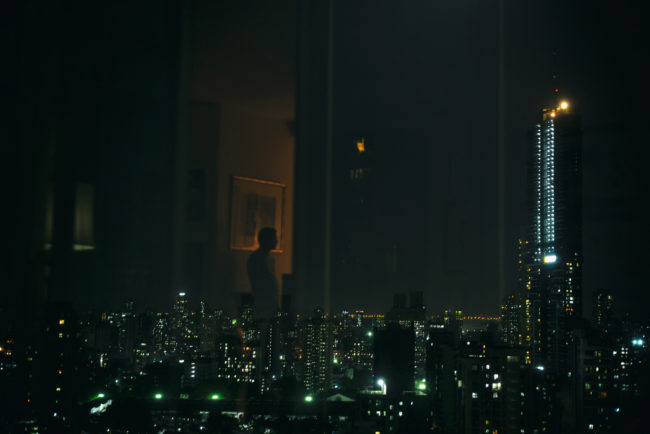 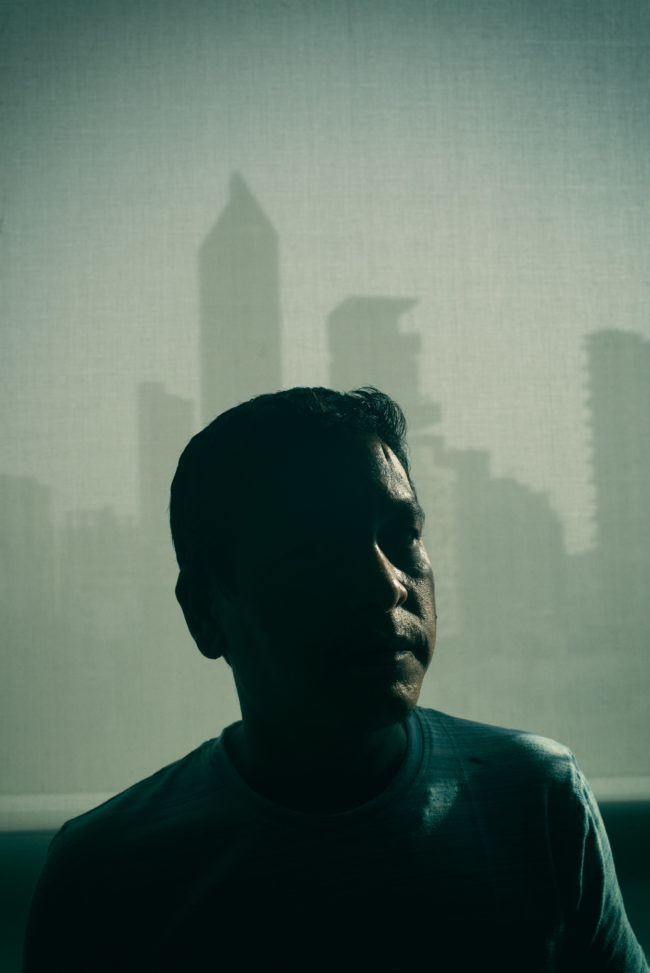 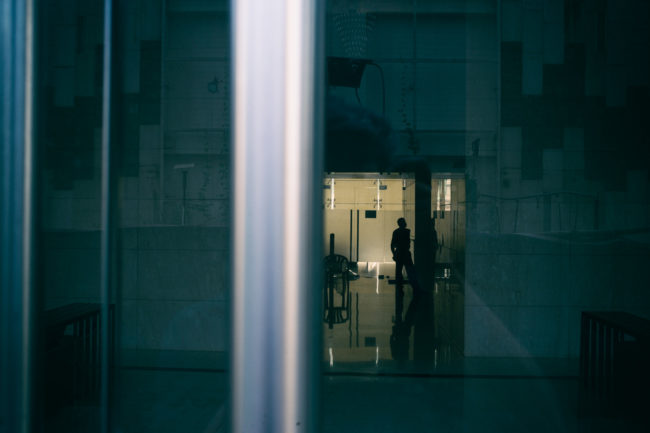 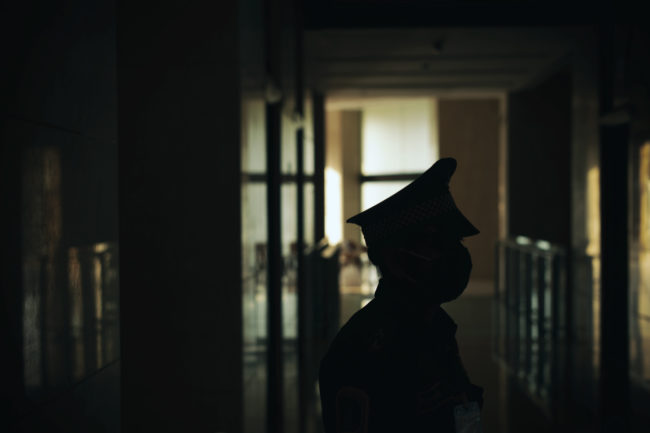 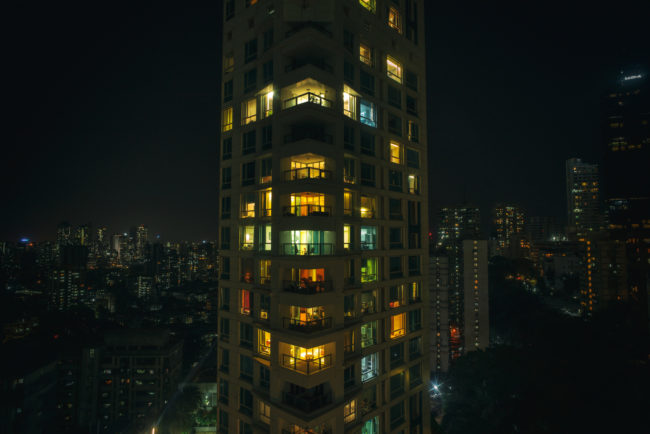 Heidi: How was this work a result of recent growth or a maturing eye?
Sunhil: On March 13th I returned prematurely from a photo workshop in Oaxaca, Mexico. I cut my trip short amidst growing unease about the spread of the coronavirus, making it back into India with hours to spare before the border closed. I live in an unusual tower block in the city, a sequestered and self-contained “oasis”, one of many new developments dotted around the city in a bid to bring “quality of life” to people in a city that has burst out of its seams. The building itself was constructed on the plot of an old and sprawling slum, and under current law the developer must rehouse the slum dwellers in the form of low cost housing on 2/3 of the plot, with 1/3 being used for the new construction.

So what you have are an elite and well to do group of CEO’s and Investment Bankers living cheek by jowl with some of the city’s poorest inhabitants. There is nothing unusual about this in a city like Mumbai, which has always broadly been the case. However, while the slums used to lie flat and spread over large plots of land, many are now vertical in nature, with poorer sanitation, more divided and with a weaker sense of community. I think I’ve been trying to push myself out of comfort zones for a while, but this situation has made the place I live a perfect, if uncomfortable subject to explore.

When was the last time you left your apartment, and what are the latest restrictions?
I did a quick grocery shopping run about 4 days ago having been within the apartment for close to 20 days. I was lucky to find some food on the shelves. Yesterday the rules of the lockdown became more severe and I’m no longer allowed to be in a car on the street if travelling less than 2km, and only allowed out for a medical emergency or for provisions. However, all street vendors have been forced to close, and my suspicion is that the supply chains have been completely broken down. I don’t imagine there would be easy availability of food, fruit or vegetables any longer. One of my key concerns is drinking water and the fact that we have filters in our homes that need regular servicing by  specialists. Obviously with a lockdown this severe nobody is able to carry out any of this work. Having said all this, I do believe this kind of a lockdown is necessary in a city like Mumbai and I think broadly speaking it has been effective if deeply uncomfortable.

How do these photos make you feel?
This juxtaposition has often made me feel uneasy, and while constructing my first and still incomplete body of work, A Disappearing City, I’ve spent an inordinate amount of time wandering through many of these constructions in various parts of the city. I always come home with a sense of unease, being so directly segregated from the people living beside me cheek by jowl. And I think the photos do give a sense of discomfort.

What were you feeling making them? Do the two align?
While I have enjoyed photographing the city outside my doorstep, I’ve never had the courage to turn the camera inwards on to the place I live, out of a subtle feeling of guilt and shame at having the privilege of living in what a lot of people might call luxury. However, “luxury” for me is the ability to be able to walk on the streets of your city, and a good “quality of life” is less about an air-conditioned gym on your premises, and more about having a park to walk in nearby. Nevertheless, not a day goes by on which I do not say a prayer of gratitude for the comfort in which I live in a city where the blanket nationwide lockdown has left hundreds of thousands of migrant workers in the lurch, unable to return home, without food living displaced, like refugees living in camps on the border of their home states.

However even comfort and luxury develops its own spirit-crushing mundanity after an extended period in isolation. I live alone with a fine house help, Mohan, who looks after the home with love and dedication, allowing me to freely carry on with my professional and artistic pursuits. So it’s just the two of us, and no visitors.

What has the forced isolation made you confront?
I’ve always been comfortable in my own company and over the past few years have been less and less inclined towards larger social gatherings. I’ve also been learning, though it’s a complex and difficult journey, to embrace both uncertainty and the concept of discomfort. I’m not talking about physical discomfort, though living with a reconstructed left heel is certainly a physical challenge for a photographer, and physical pain is a part of my daily life. I’m talking much more about the upsetting of routines. I think as a society we have developed a disproportionate sense of dependency on “predictable” and “certain” outcomes.  And we now have all types of artificial methods of coping with “pain”. This period is helping me to confront some these questions. And while I have been struggling with these kinds of issues for years, there is once again both a kind of luxury and struggle in being able to contemplate these in isolation, given the fact that the one commodity many of us seem to have copious amounts of, is time. On a more practical level, I completed the initial work on several new photo projects. I then decided to pick up the camera and document life in the lockdown from my reasonably unique perspective.

During my time in India, I became very familiar with your personal work, this marks for me a colorful and soulful evolution for you, what do you see?
When I look at the photos I do see a major evolution, having worked in monochrome for the better part of ten years. It has also given me a sense of confidence about finding “beauty” in what I consider to be a very ordinary an aesthetically displeasing universe. It’s arguably “easy” to make a monochrome picture on a grungy street, or create a sense of both “romance” and “otherness” in high contrast black and white, but to turn your camera inward in straightforward colour, can be both unsettling and challenging, forcing you to confront much of your complex inner feelings about your own privilege.

We often talked about belonging, has that shifted?
I’ve spent much of my life feeling like an outsider, whether it was growing up as a South Asian schoolboy in a predominantly Jewish, North London neighbourhood, or being brown-skinned in a white-skinned elite British Boarding School, or struggling with the language and culture in a tough-as-nails Hindi speaking film industry. And now perhaps that feeling of unbelonging continues to pervade my current habitat, as an aspiring artist in a deeply corporate universe. Making these photographs has given me a deeper sense of understanding of who I am, and helps me to believe in the fact that beauty is all around us even when we feel claustrophobic and constrained, frightened and uncertain.