Licensing: Unlimited use of up to 83 images in perpetuity

Agency: Small, based in the Northeast 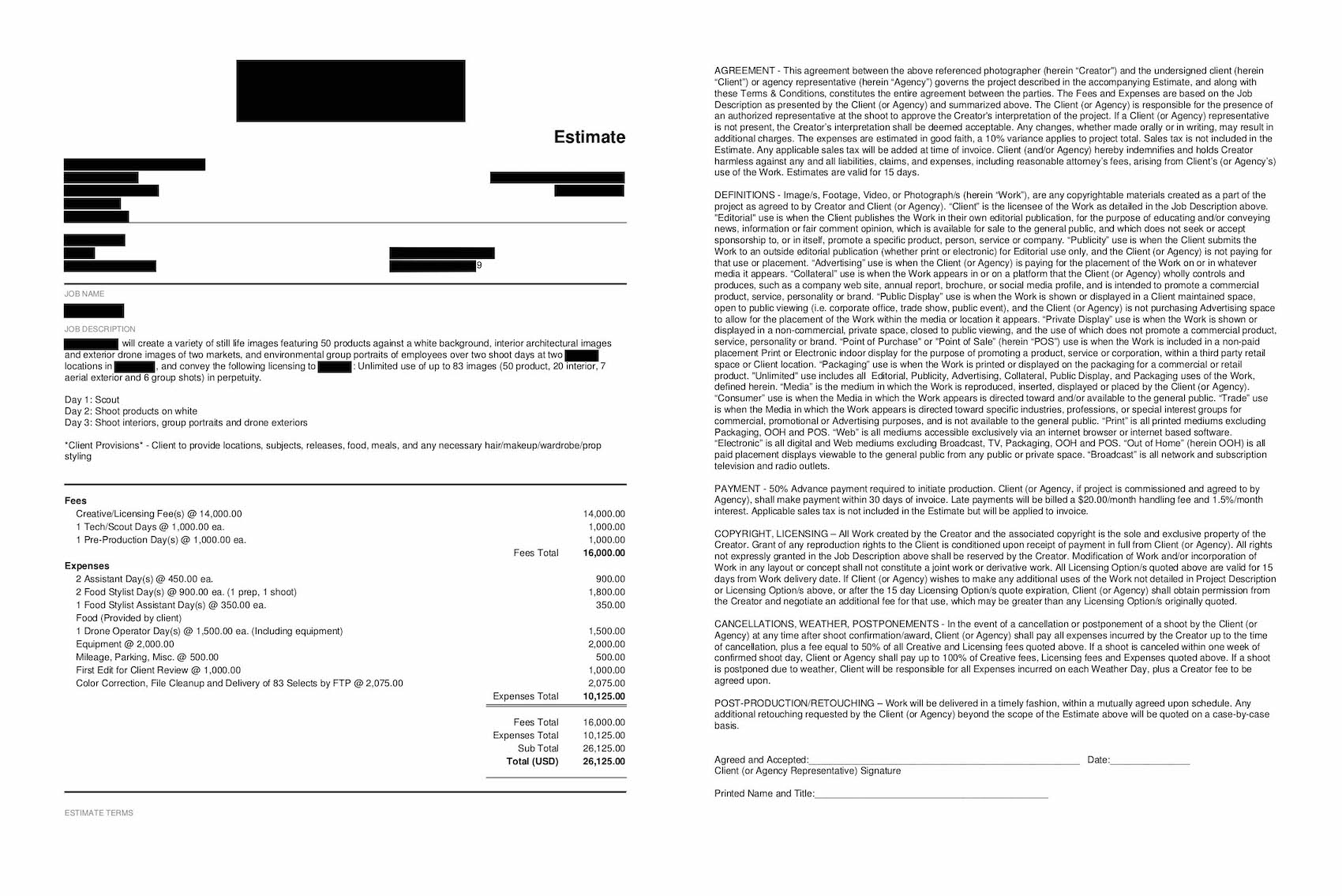 Creative/Licensing Fees: The project had four components consisting of 1) still life images of food items against a solid background, 2) interior architectural images, 3) exterior aerial architectural images, and 4) environmental group portraits of employees, which would be captured over two days at two facilities/markets. Overall, they were hoping to end up with 50 product shots, 20 exterior architectural images, 7 aerial exterior architectural images, and 6 group shots, and they requested unlimited use of these images in perpetuity. The client only had one major market for customers in which they’d be advertising, and despite the request for unlimited use, the images were most likely to be used for collateral purposes. As much as I’d prefer to come up with a tiered pricing model, I had a feeling that based on previous projects with similar clients, we’d be looking at a couple of hundred dollars per image if we were lucky. I initially thought that a fee somewhere between $6-8k per day would be appropriate given the limited exposure. While I first suggested a creative/licensing fee of $16,000 to the photographer, we decided to come down slightly to $14,000, which we thought would be palatable on both ends.

Tech/Scout and Pre-Production Days: We anticipated that the photographer would scout both locations prior to the shoot on a single day. Also, I included a pre-pro day to account for the photographer’s time to help line up the crew and correspond with the agency about the details/logistics.

Assistant: The photographer wanted a lean crew to be as nimble as possible, especially because we anticipated working in a tight environment. We therefore included just one assistant for both shoot days.

Food Styling: We included a stylist for two days to account for one prep day and one shoot day, as all of the food images would be captured on just one of the two days, and we included an assistant for the stylist on the single shoot day as well. The client told us that they would provide all of the food items, and even though the stylist wouldn’t have to shop for food, their prep day accounted for product intake and organization.

Drone Operator: The photographer planned to outsource the aerial exterior architectural images to a drone operator, and they would capture the content on just one of the two shoot days. We included $1,500, which we anticipated would cover the operator and their equipment.

Equipment: I included $1,000/day to cover basic camera, lighting, and grip equipment, all owned by the photographer.

Mileage, Parking, Misc: I included $250/day for miscellaneous expenses that might arise, mainly as a buffer to account for unforeseen expenses.

First Edit for Client Review: This was based on $500/day and included the photographer’s time to batch edit all of the content and create web galleries for the client to review.

Color Correction, File Cleanup, and Delivery: I typically include at least $50-$100/image for basic post-processing, but since we wanted to keep the expenses to a minimum, we went with $25/image for the light post-production work. Overall, that totaled just over $2k, and I felt this was reasonable for the photographer’s time.

Feedback: We were asked to separate the project into two different proposals while making a few updates. First, they reduced the number of still life product shots from 50 to 25. Also, rather than shooting still life images of the products on location, they were interested in capturing that content at the photographer’s studio. This was a direction that the photographer suggested and hoped they would want to go in, and she was willing to integrate a discount into her fee and charge a very modest studio/equipment fee to steer them this way. Additionally, they would be bringing all of the prepped and organized products to the studio, so a food stylist would not need a prep day. As for the architectural images, they were willing to do without the drone content, and overall they were hoping we could find ways to come down collectively. We accomplished that by dropping the photographer’s fee a bit in consideration of the reduced shot count and by making a few tweaks to the expenses. Here were the estimates: 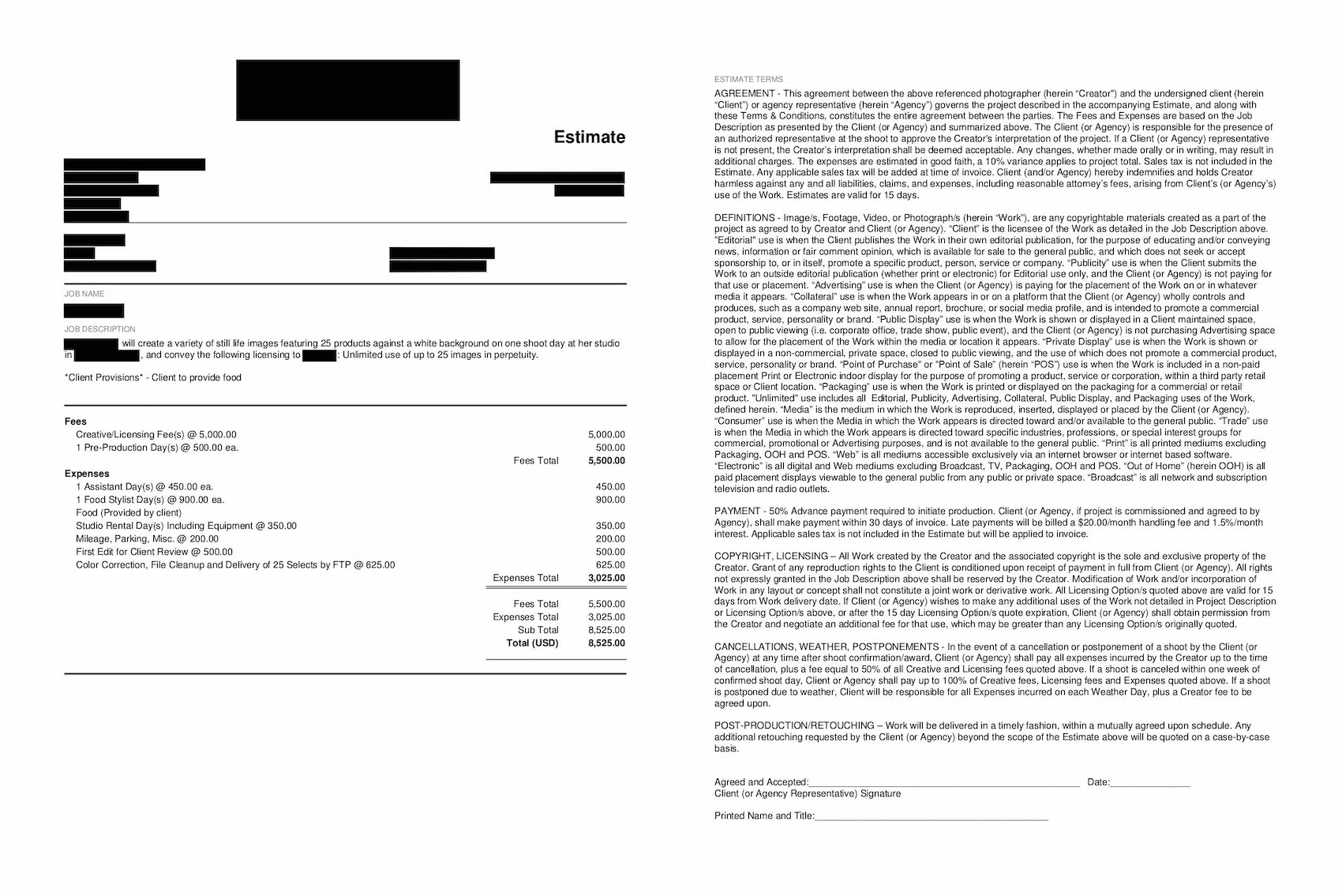 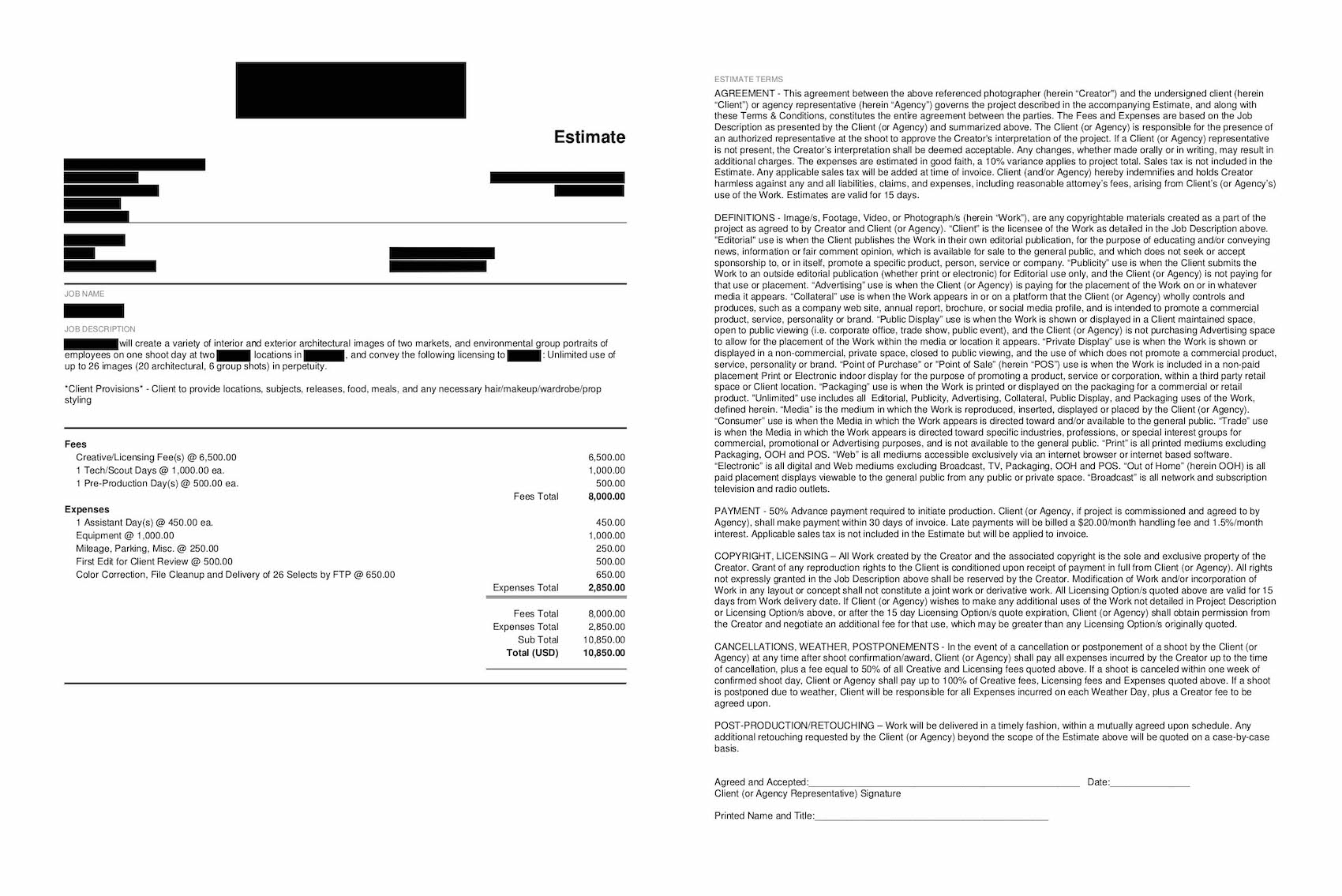 Results: The photographer was awarded the project.

If you have any questions or if you need help estimating or producing a project, please give us a call at 1 610 260 0200 or reach out. We’re available to help with any pricing & negotiating needs—from small stock sales to large ad campaigns.

The Art of the Personal Project: Eric Meola