I always knew I’d have kids, and given how much I relish being a Dad, I guess I had it right.

(I used the word “relish” here, because I don’t know if “enjoy” is quite right.)

I love my children more than anything, and would take a bullet for either of them, as I would for my wife.

And each of the kids, both 21st creatures through and through, are funny, thoughtful, sweet and smart.

I enjoy them as people, no question. They’re awesome.

Just last night, when I was putting my daughter to bed, I tickled her, she ripped a huge fart as a result, and we laughed so hard my belly hurt. (Or maybe that was the lard-bomb-enchiladas my wife brought home…)

I cherish being a parent.
I value it.
It’s the most important thing I’ve ever done.

Being a parent has made me a smarter, more capable, more compassionate, empathetic, successful person.

It’s way too hard to be fun, generally speaking.

There are parts of the experience that are great, and specific time periods or vacations that, as an exception, might be pure bliss.

But on a macro-level, it is grueling to constantly find the energy to be a full-time professional, and a full-time Dad.

We hear about that all the time, with respect to the impossibility of working Moms having it all, or being perfect in each arena, but we guys have the same problem too!

With each successive generation, new parents learn just how comprehensive it is to give life, and then sustain it.

But with each successive generation, one group of people get to have all the fun, without (almost) any of the responsibility: the grandparents.

Hell, Jessie and I moved back to Taos so that we could raise our children, (then hypothetical,) among two sets of grandparents: for the help, the support, the encouragement, the diapers funds, and all sorts of privileges that come from having built-in help.

It’s likely that I haven’t said thank you often enough, (though it’s a word I bandy about often,) because the grandparents treat the entire experience, (the same one that’s giving me gray beard-hairs,) like it’s a big trip to Six Flags on Ecstasy all day, every day.

Who wants more ice cream?
How about some chocolate sauce on top?

And don’t let me forget to pour the whipped cream directly into your mouth! (Just joking, Dad, you know I think it’s cute.)

Grand-parenting looks like the “fun-do-over” that all parents realize they want, (too late with their own kids,) because they were too stressed and freaked out to enjoy it when their babies were young and adorable.

I mention this now, having just put down “Real Pictures,” a book that arrived last fall from Peggy Levison Nolan, published by Daylight. According to the end text, Ms. Nolan is the mother of 7 children, whom she’s photographed all along, but this book focuses squarely on their lives as adult children, with a slew of grand-kids in tow.

This is one of the books I mentioned recently, as I’d looked at it once and deemed it too similar to “Born,” which I reviewed not too long ago. But it seemed like it was worth re-visiting, as I knew I’d first viewed it in a bad mood, and it was at least intriguing enough to get into the maybe stack.

(In fairness, I missed the page with the subtitle “Tales of a Badass Grandma” the first time around.)

Today, the book’s bright, reddish-orange color caught the sunlight, and I picked it up again with fresh eyes.

Almost immediately, I was attracted to the cheeky insouciance with which these parenting adventures were photographed. There’s a brief opening statement in which the artist shares that she has kids, and honors her oldest daughter, who apparently led her younger siblings on a Western migration.

I was consistently intrigued by this sense of remove, of watching the action from the slightest distance, while still being in the room.

The pictures certainly don’t feel like they’re made of strangers, especially given the intimacy of the several baby butt shots. (Which I won’t photograph below, for obvious reasons.)

The kid in the diaper up the pole is a great image, and it’s paired with the dirty, painted feet standing on a chair. Most of the images use color and light well, (Thanks, California,) while also showing the behind-the-curtain, absurdist mundanity of it all.

The end text shares that Peggy Levison Nolan makes photo albums for each of her children, and the pictures are the same ones in this book. They may look like art, but to her, (and her family,) they are a personal history that we all get to share.

Just before the essays, there’s a short poem about (presumably) the artist waking up to thrift-store-painted portraits on the wall, rather than the sounds of her family.

And the last photo is (presumably) of her aged feet in bed.

It’s a powerful way to bring the story home, and I’m glad I gave this strong book another look. 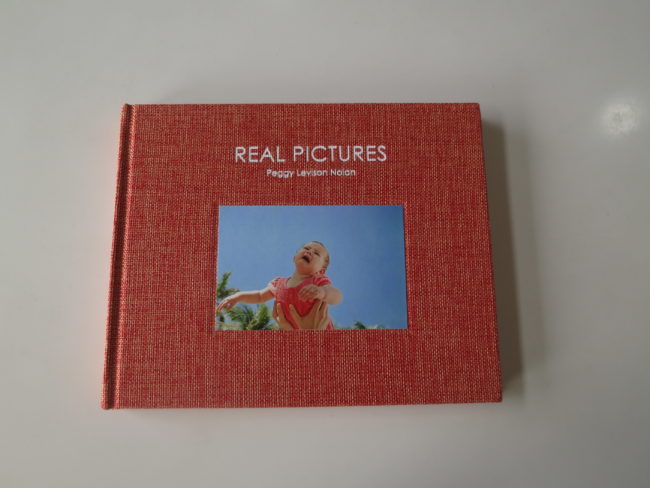 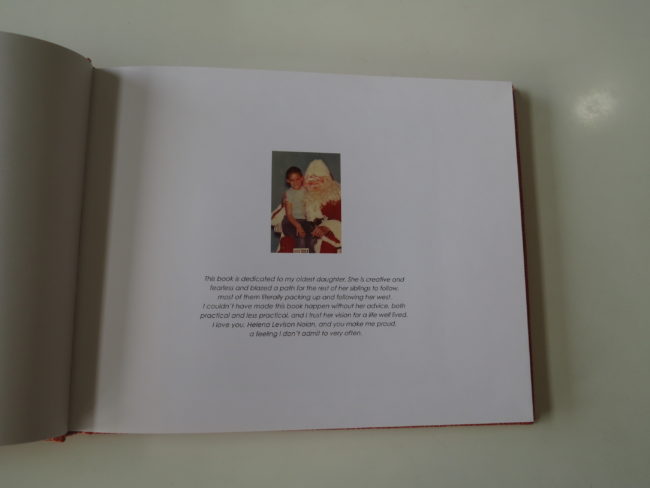 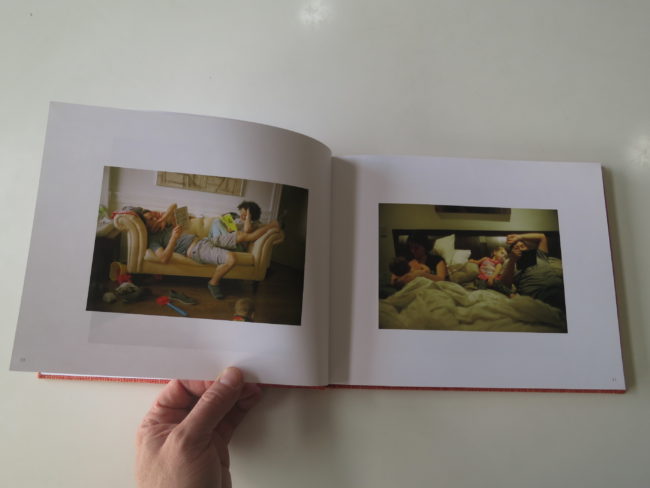 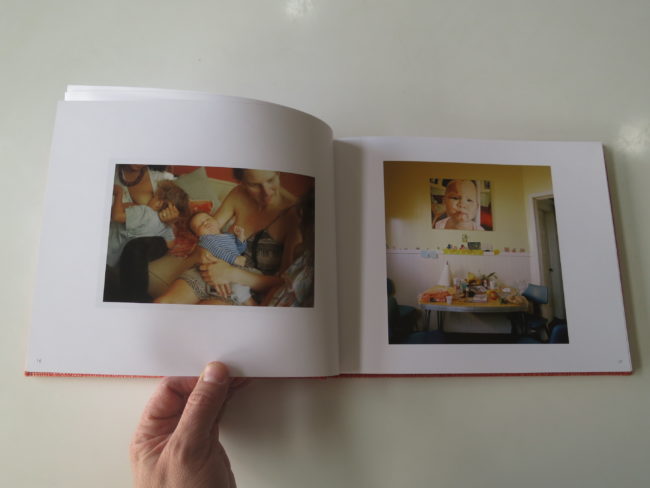 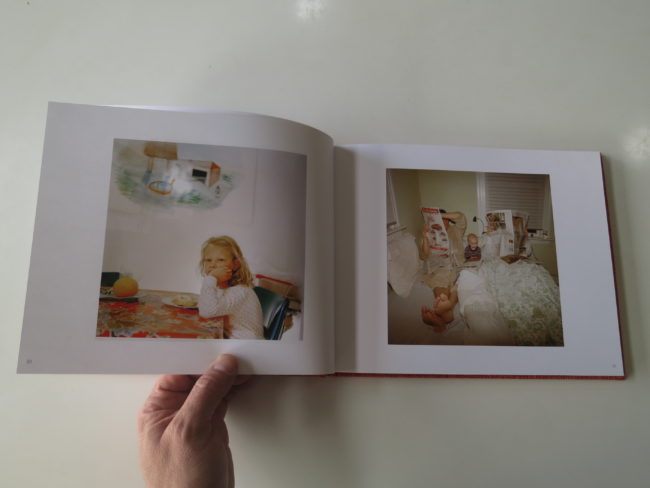 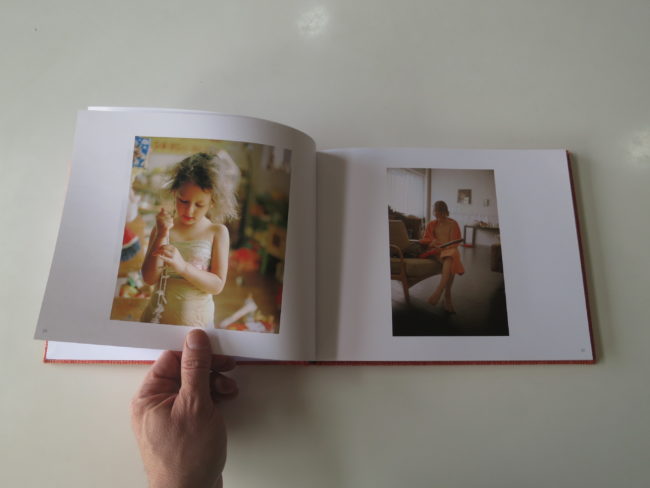 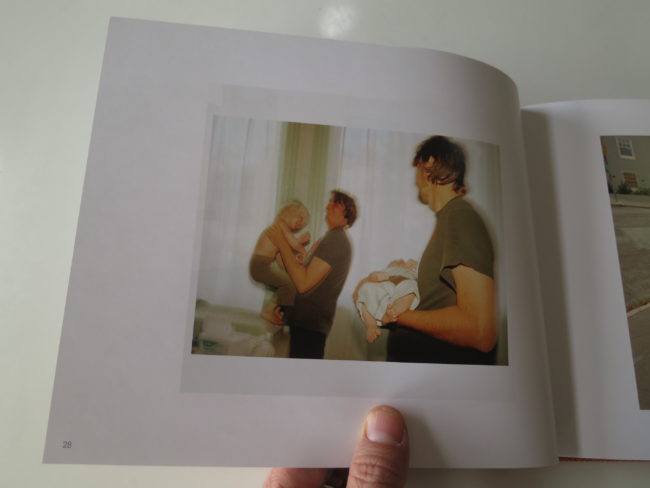 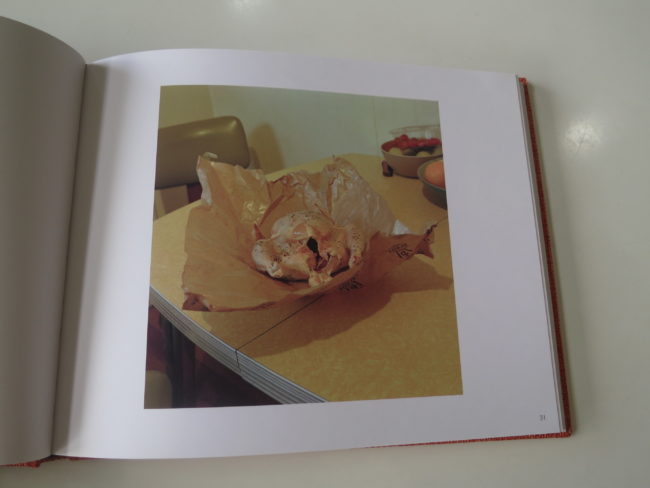 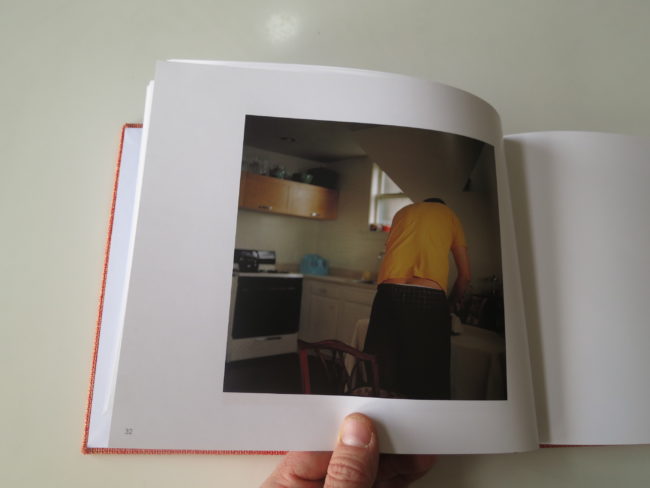 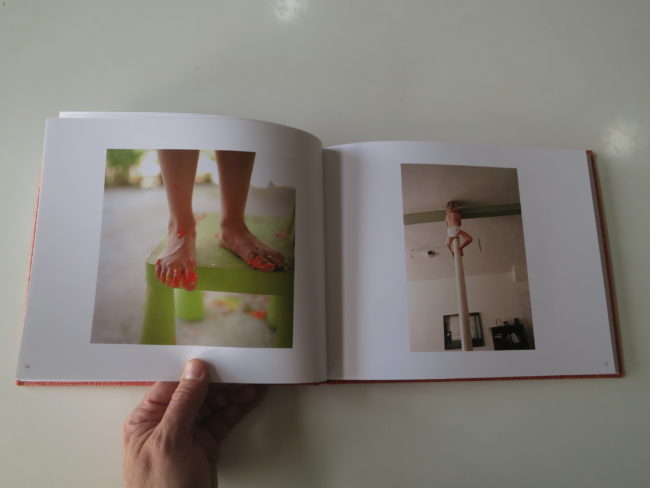 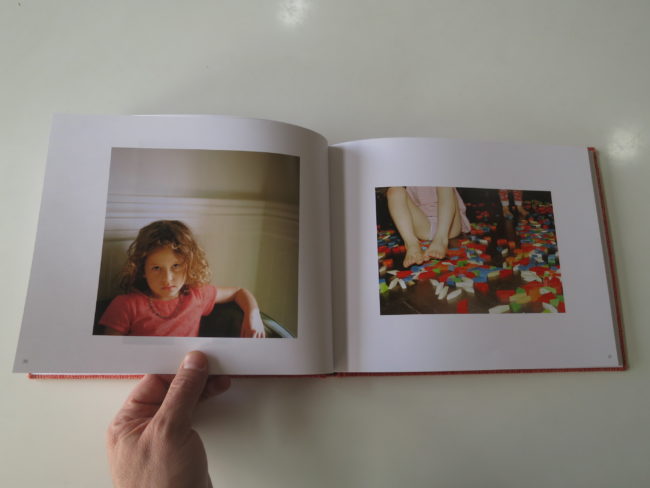 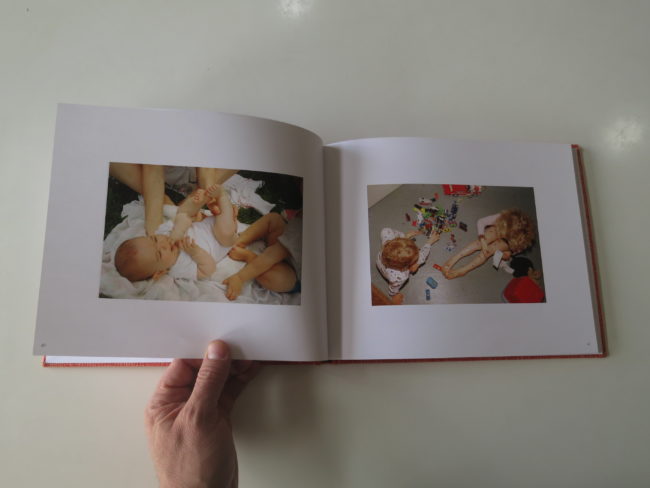 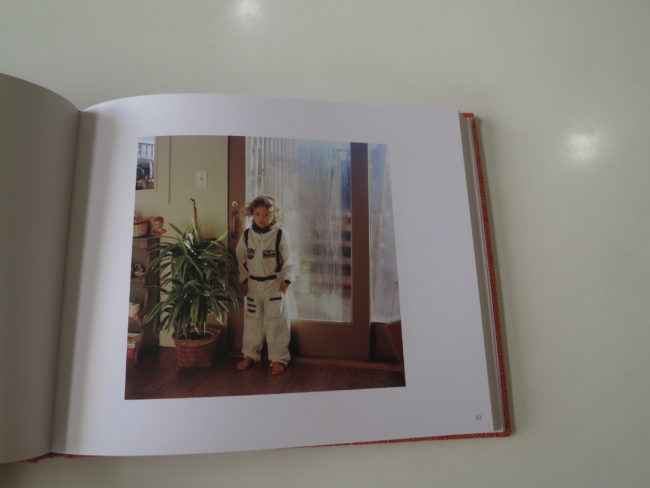 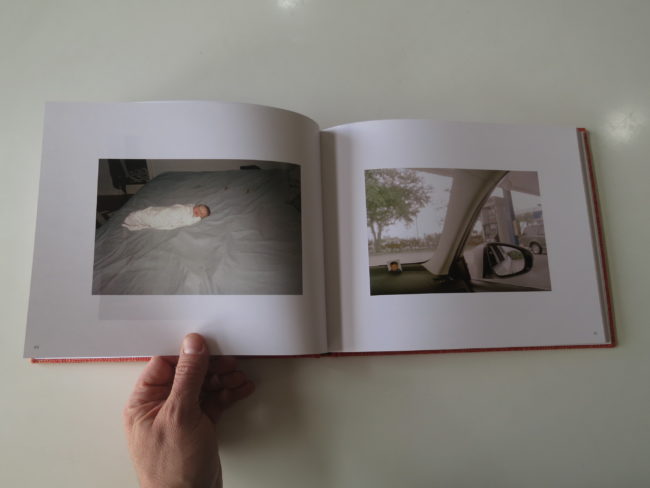 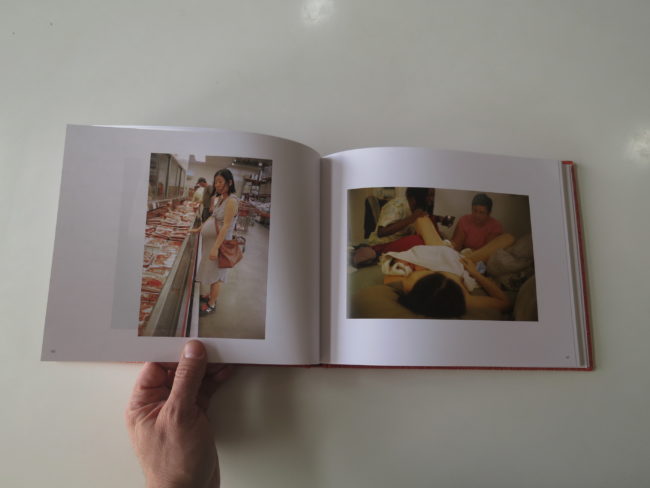 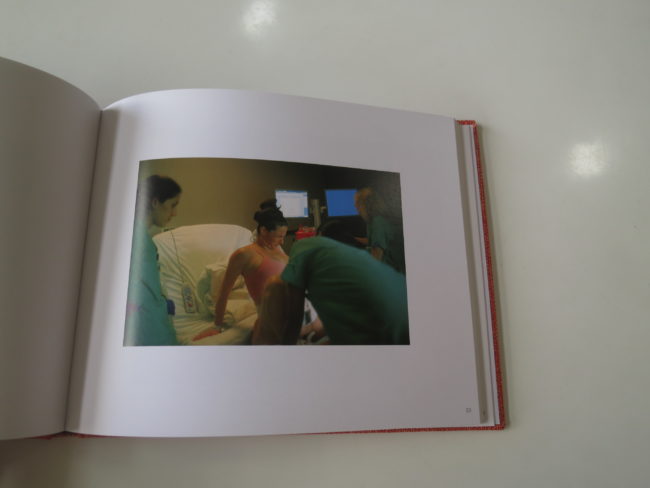 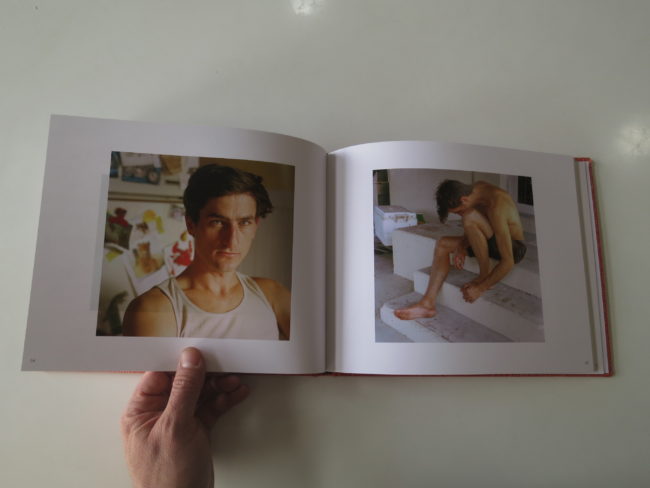 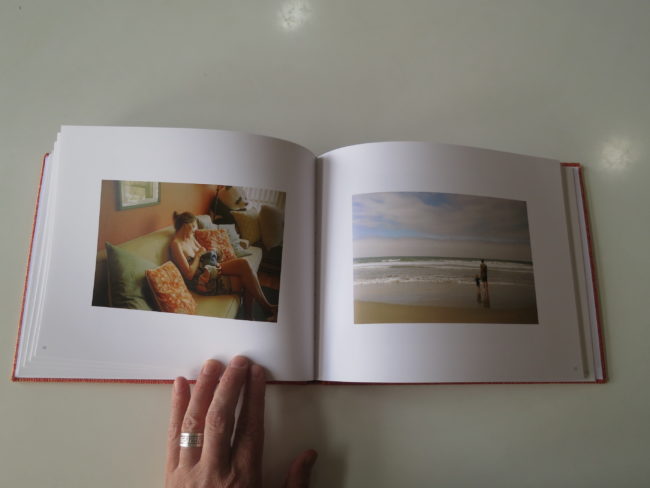 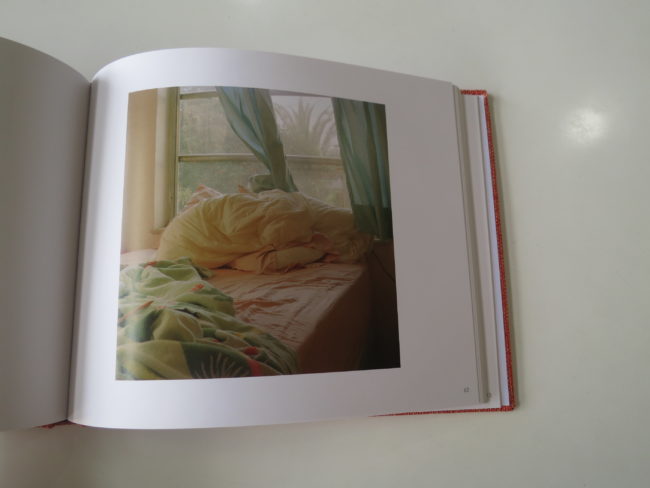 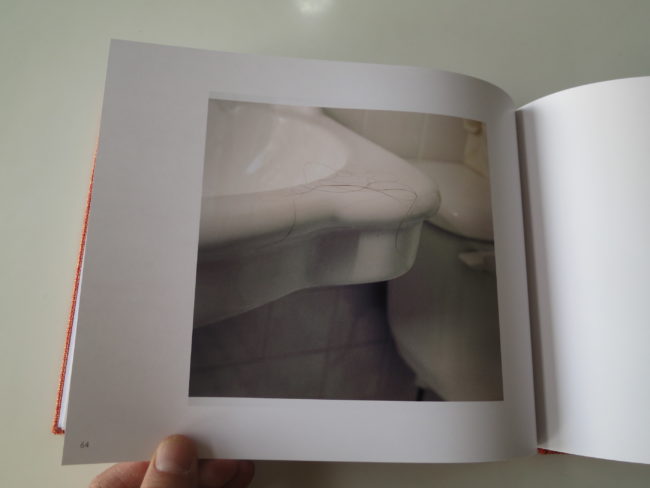 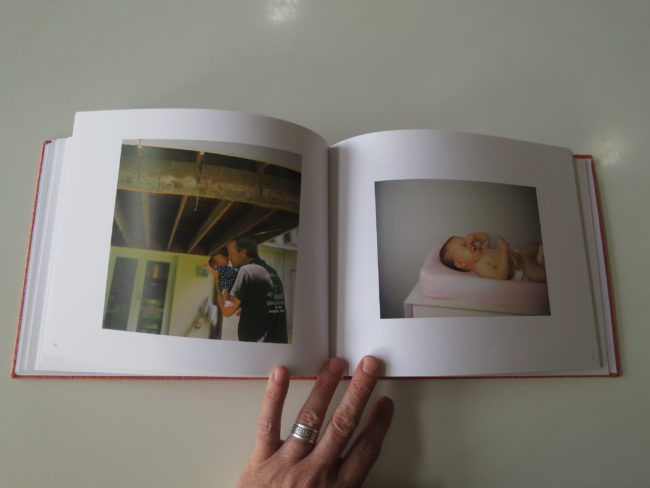 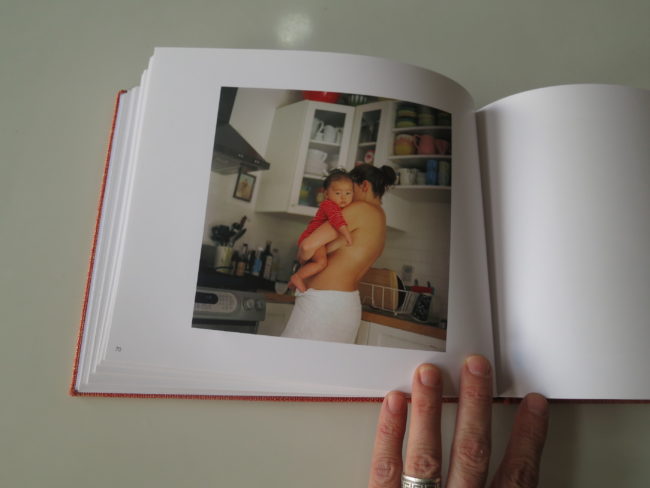 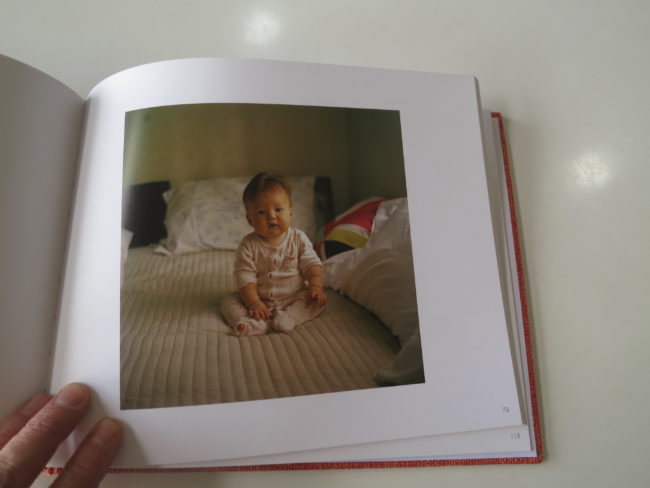 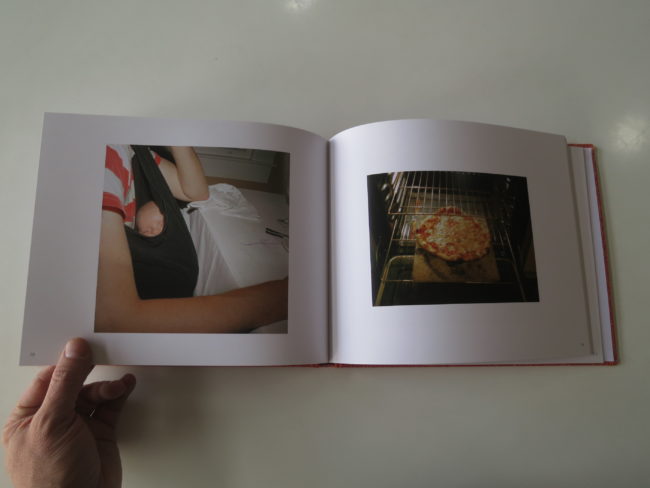 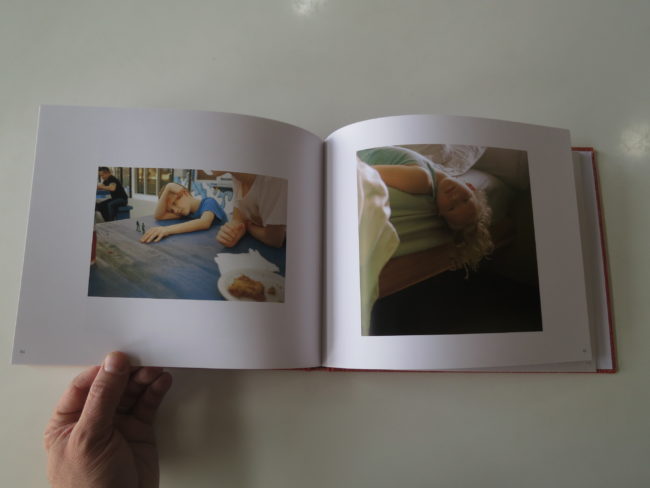 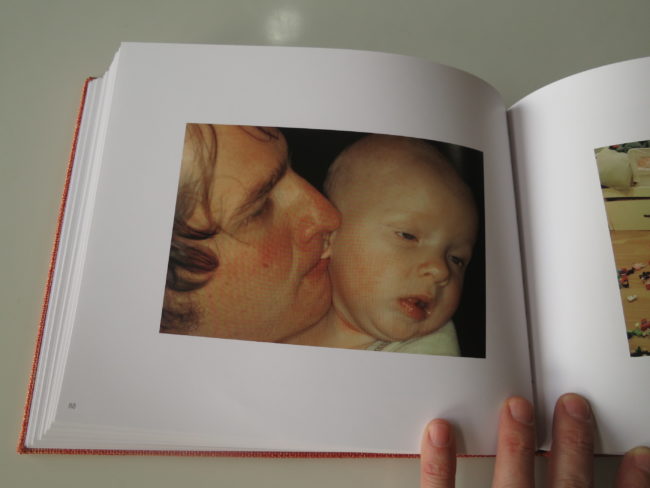 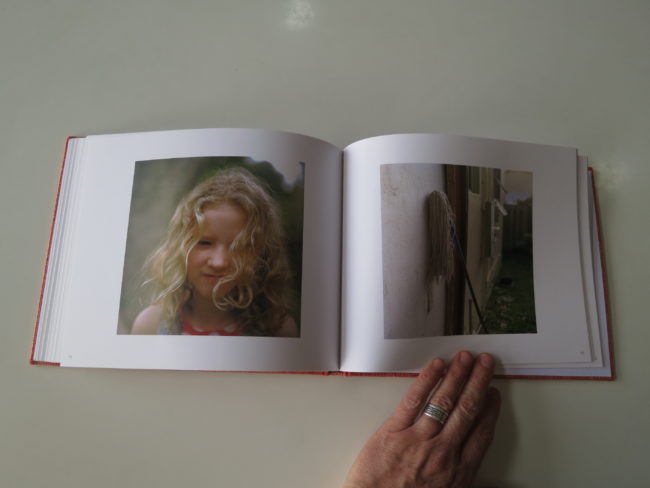 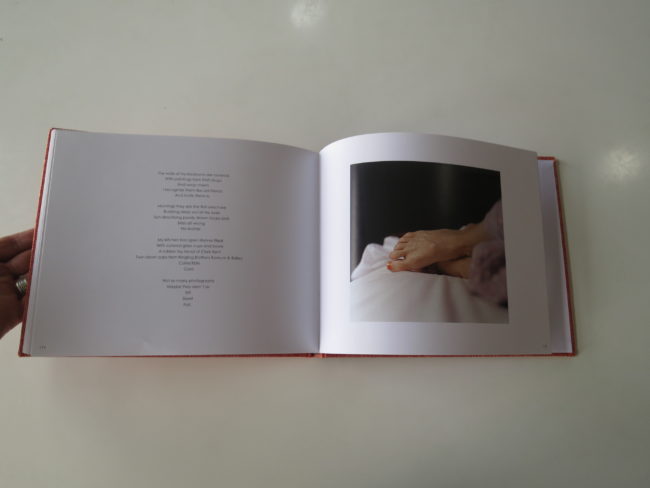 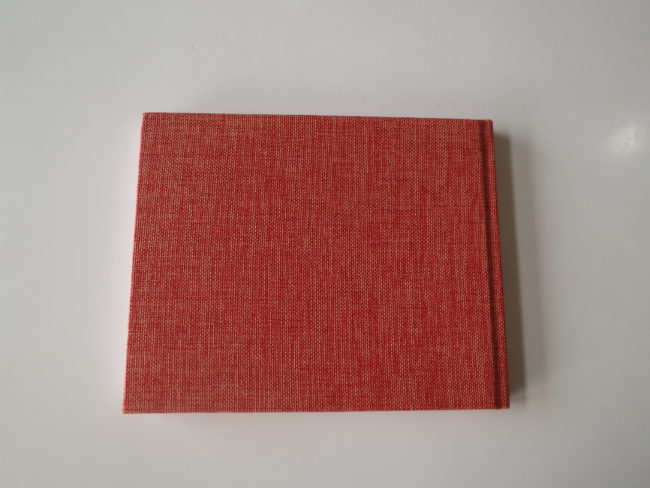 If you’d like to submit a book for potential review, please email me at jonathanblaustein@gmail.com. We’re particularly interested in submissions from female photographers, and artists of color, so we may maintain a diverse program.