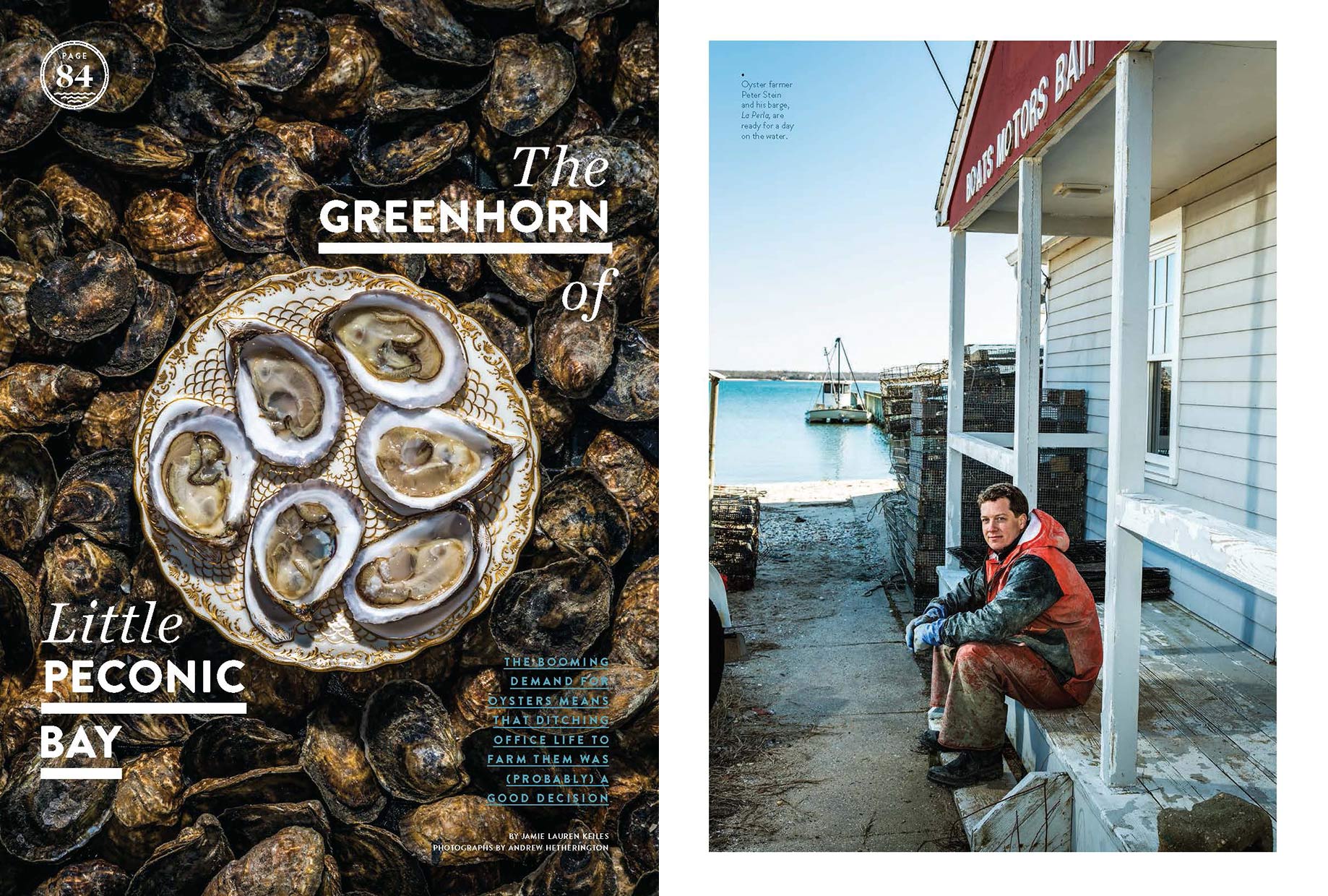 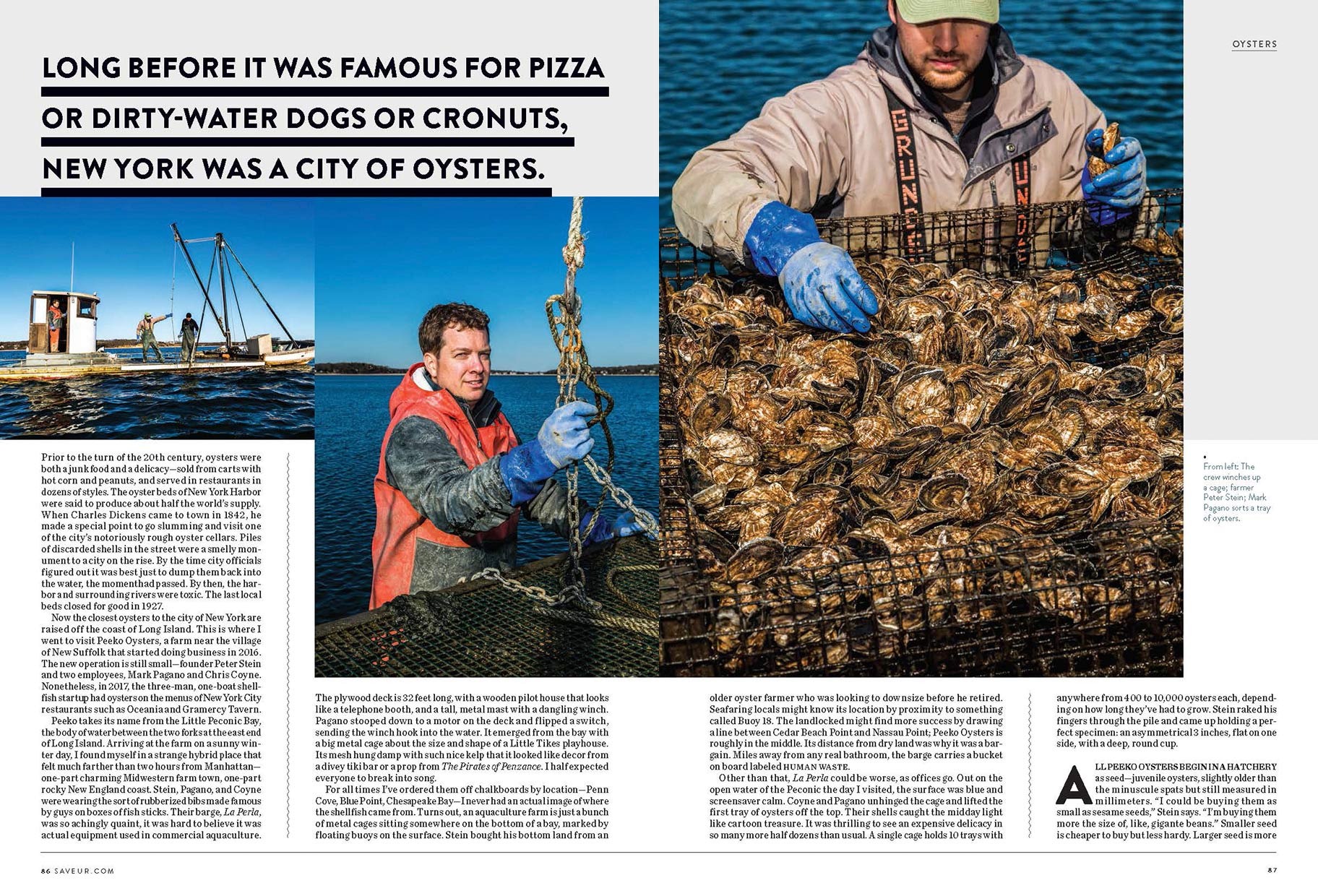 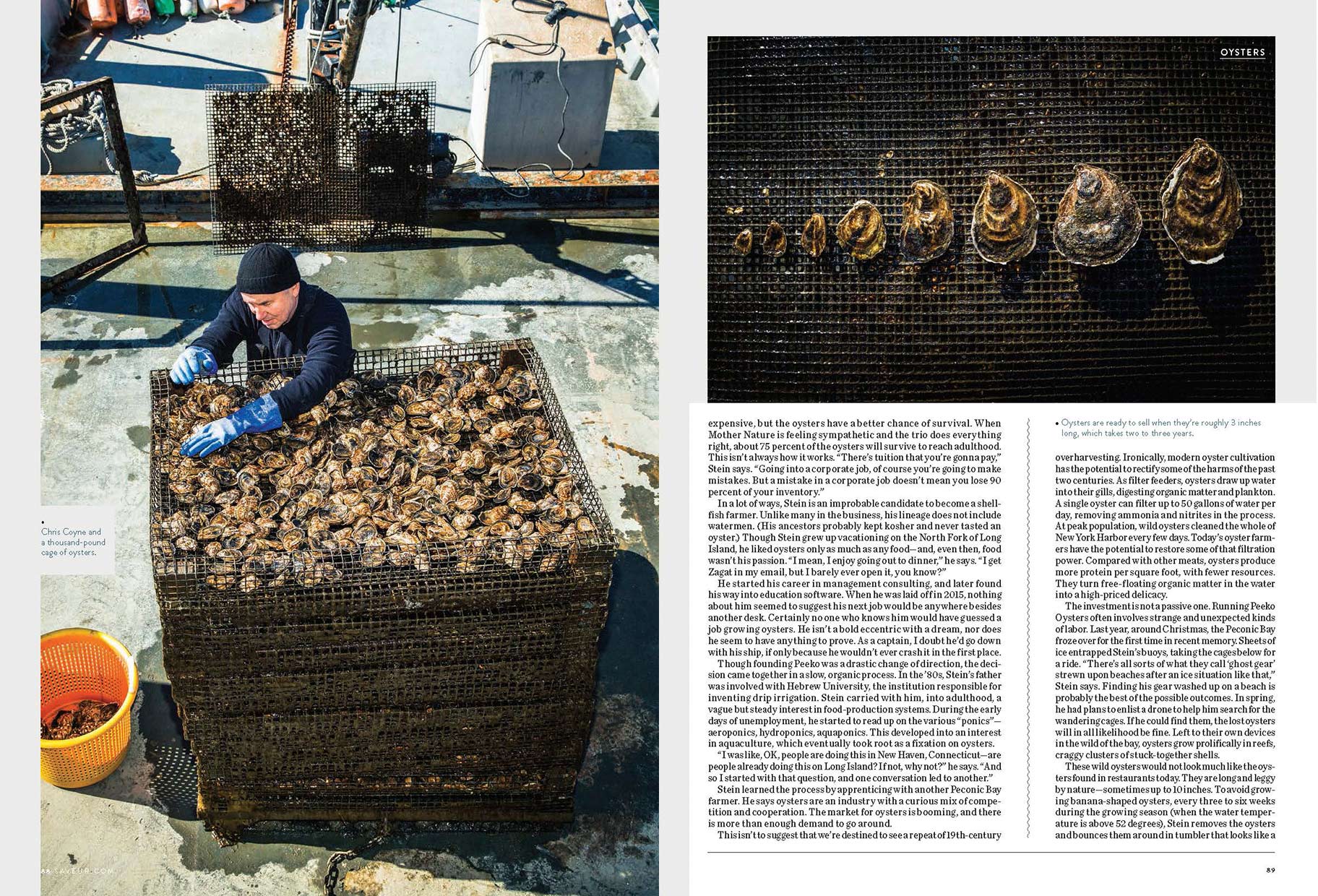 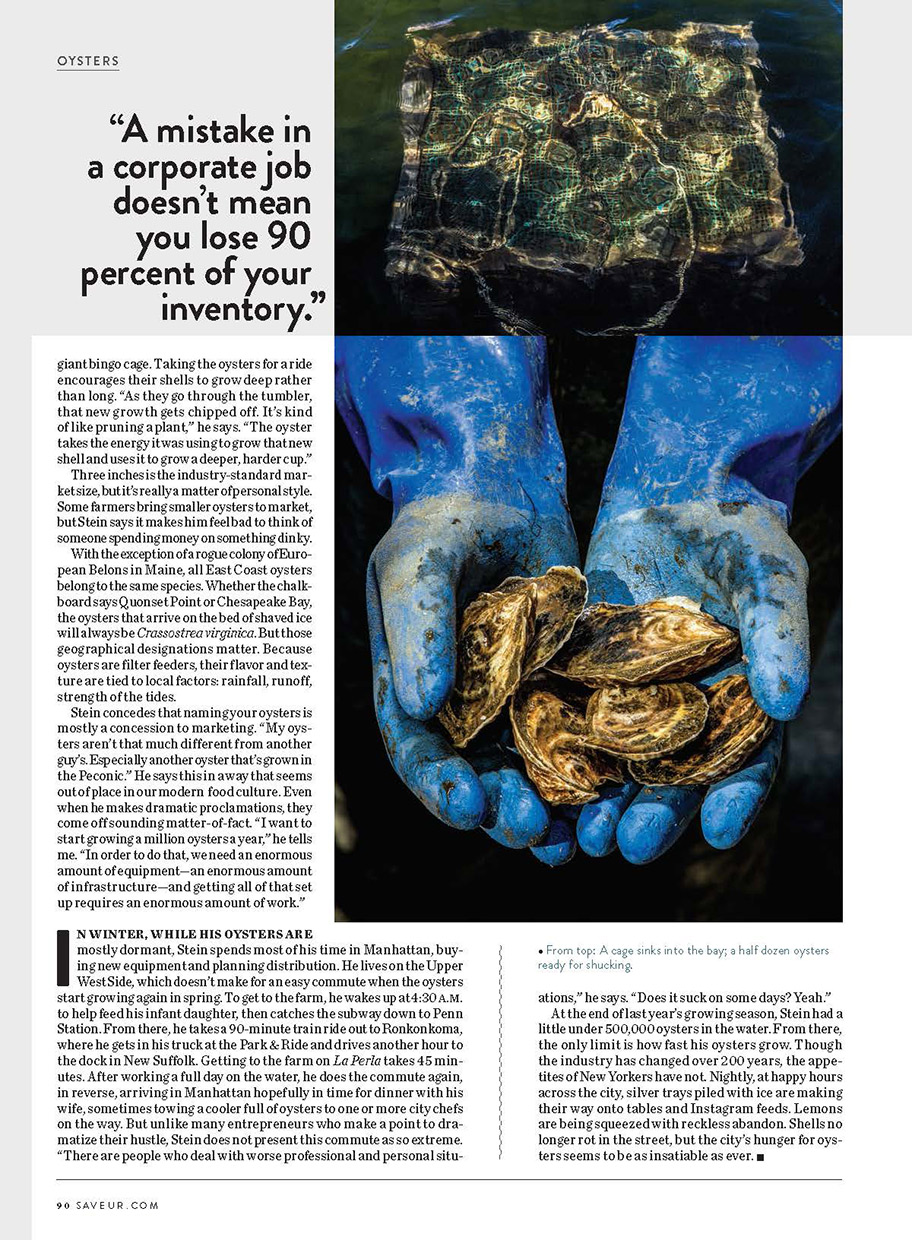 Heidi: What type of direction did you get from the magazine?
Andrew: Thomas Payne, Photo Director of Saveur, sent me an email wondering if I would be interested in shooting the Peeko Oyster farm out on Long Island. To be honest, he had me at oysters, but we had a follow-up phone call where we dove deeper into the nitty gritty of what was involved on a practical level and discussed his vision. He also sent me a mood board referencing food photos of mine that he liked, a shot list and info on the story itself. Peter Stein, the oyster farmer, is relatively new to the business and that was an important angle to incorporate into the visual narrative. The theme was “growing” and the story is about what it takes to grow, scale and establish an oyster farm.

How much research do you do for shoots?
I like to get as much information up front as possible. This helps with my own research on the subject and the logistical and production needs to make it a successful shoot from my perspective. It is also really important to talk to the subject in advance on a shoot like this, after all they have more knowledge about the practicalities than anyone else so I arranged a phone call with Peter after an introductory email. Peter also sent me some photographs and video he had which was incredibly helpful.

I would not consider you a “food” photographer per se?
Ha, well I am a photographer who loves to eat and loves to cook so I think that qualifies me somehow. Food is featured on my website in it’s own gallery and in specific projects and commissions for clients like Bon Appetit, Men’s Health and Travel + Leisure. I also really enjoy photographing chefs and have been fortunate to shoot some heroes; Anthony Bourdain, David Chang, April Bloomfield, Sean Brock, Jean Georges, Wylie Dufresne.

You can’t visually tell a story like this – oyster farming – with a beautiful singular still life. It’s about the people who grow them, where they grow them, how they grow them, etc. It’s less about being a “food photographer” and more about the ability to tell a story. I try to tell that story in my own way; as candidly, authentically, imperfectly and humanly as possible.

Weather is key for a shoot like this, did you have a set of rolling dates on hold?
It was important to the magazine that the photos look “summery” as the story was running in their June issue. But we actually shot this, out on the North Fork, at the end of February.

After speaking with Peter, it turned out that the most important weather factor would be the wind and not sunshine or temperature. If conditions were not calm, we would not be able to take to the water on his oyster barge so we put several back to back dates on hold. Peter made the final call 48 hours before the shoot and irony of ironies we also had “summery” sun all day. As it was February, we were dealing with a short amount of daylight. Even though we had sun all day the bonus was it was low in the sky which only enhanced the quality of the light as it bounced back off water. We all really thought we were in for an early spring as it was so idyllic. Little did we realize at the time there would be still two more months of hard winter ahead.

Was this shot all in one day?
Yes, we drove out and back from NYC in one day. I had mapped out the day with Peter – I went through my shot list with him and we decided on what would make most sense and be most efficient in terms of what do to when. Besides weather, there were a lot of factors to take into consideration. After all we were going to spend part of the shoot on open water photographing on and off La Perla, his boat used to harvest the oysters. We decided that we would do these shots at the end of the day to make the most of the late day light as it was not going to be possible to be on the water for sunrise.

The other thing that was really key was to be able to shoot from another boat. I learned this the hard way from previous experience. It seems obvious but it’s incredibly limiting if you are stuck on the one boat. If you don’t have the second boat you can’t shoot the primary vessel in open water. This was one of my first requests for Peter when we spoke initially and he was able to organize and coordinate it. It really was a massive assist both creatively and logistically.

How did the day unfold? Was it just like hanging out and you just happened to be taking photos?
Apart from scheduling what to do and when we really sort of hung out for the day. Peter and his crew were great to work with and were super accommodating. Thomas was there too and the writer Jamie. For me, the best thing is to let people do what they do and to document it as I see it. I like it to be as real and natural as possible but obviously I stop people, direct a little, compose and finesse the scene for my frame. It’s all based on observation and if it starts to feel too posed I like to shake it out and have them start over.

I love your portrait of the oyster. Tell me about the making of this image.
It was the last shot at the very end of the day. We did it on the boat. Peter supplied the vintage plate, too, which really helped. It wasn’t something that I over thought. It was just one of those shots that happened. It helped doing it last, not just for the evening light but at that stage I was in a groove and the photos were coming easily. It really was a fun day. Of course then we got to eat the delicious oysters before driving back to the city.

The Daily Promo - Gentl And Hyers

The Art of the Personal Project: Doug Ross